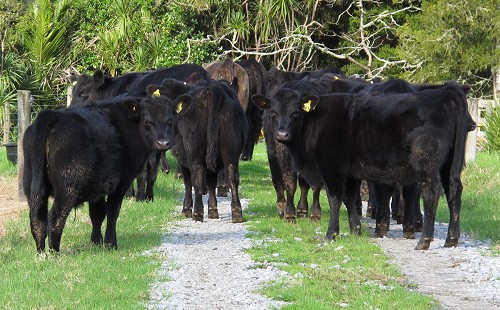 I brought the young cattle in to the yards this afternoon for a copper injection - some of them are off to their new home tomorrow, and since they're the youngest and smallest of the lot, I want them to go with every chance of a healthy and growthful future.

Before I gave them their injections, I put them all over the scales again, to get a last weight on the youngest calves.  Later I worked out their 200-day weights and their mothers' weaning ratios (the calf's weight over the mother's weight, giving the percentage of her own weight she weaned).

The numbers are all pretty satisfactory, as follows:

The cow weights were quite interesting, higher than usual at this time of year, and some of them are in rather better condition than they need to be, but overall they're about right.  The pedigree cows were the biggest at 588kg, the commercial cows at 555kg, and the overall cow average weight was 564kg.

Breaking the cows into age groups shows how their weights change over time, as they mature.  I didn't split them into calf sex groups for the weaning percentages, because there were too few of them in some divisions:

Most of my cows are of quite moderate stature, so their weights are a bit of a surprise.  I always think of them averaging around 550kg.

I left the twins out of the calculations, because they'd have skewed the figures.  Their mother weaned 402kg of calf, which was 68% of her own body weight.  The twins were far lighter than the steers average, by 58 kg each, but I believe they'll catch up well enough on good feed.  I probably should have drenched them earlier, since they were probably relying more on grass than their peers.

After a relaxed night in the House Paddock, we moved the calves to the yards again this morning, to draft off the last eight to go to Victoria Valley, down the road.  Now there are 13 left in the mob.

Stephan came in just after 2pm, holding his hand in that way I know quite well now, and went straight to the bathroom, where he carefully washed around his latest dreadful injury.  Good grief.  He was over the road stripping the old false-boundary fence, pulling out staples and removing the battens, when he slipped down a steep bit, catching his foot in the very long Kikuyu.  Flinging out his arm in an attempt to save himself from falling, he connected with some of the old rusty barbed wire on the fence, causing a very meaty-looking gash in his palm.  He thought he could put a plaster on it and go back to work, but I wasn't convinced.  Steri-strips to hold it all together wouldn't have worked either, on a sweaty, highly mobile palm.

I phoned the after-hours medical number and they said we couldn't be seen until after 7pm.

We went to town, leaving Jill in front of the fire at home, thinking we'd be back quite soon.  We had to wait for about two hours to be dealt with, although when we were, it was expert treatment.  The doctor injected a fair amount of local anaesthetic into the wound, flushed it all out, put in a couple of internal disolvable stitches, and three in the outer skin, saying it was a reasonably deep and serious wound which certainly demanded careful treatment.  I'm glad my triage assessment was confirmed. 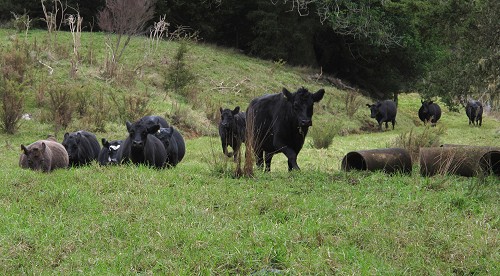 I went out to check the cows, and finding their paddock reasonably well chewed down, called them down for a move to the Bush Flat.  They came at a run from away up the top somewhere.

The concrete pipes are from the culvert Stephan rearranged last year. 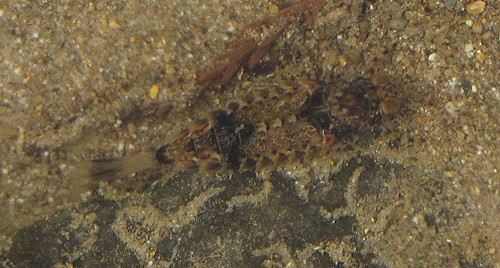 Walking back across the stream, I noticed a movement on the sand under the water and managed to catch the creature to see what it was: some sort of insect nymph.  It was a prettily coloured thing, about 1cm long. 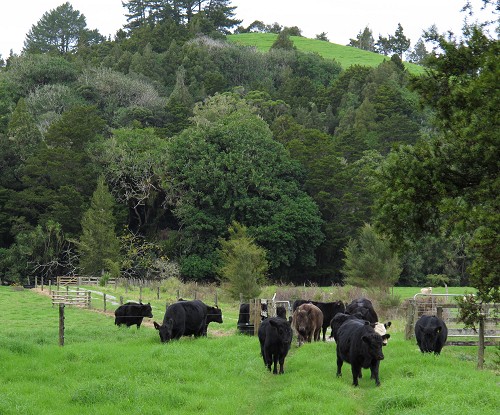 Back near home again, I called the little heifers out of the House Paddock and into the Camp.  Of the 13 animals, six will be going off on a truck sometime soon, to Mangawhai.  In the mean time I'm continuing to try and train them as well as I can, to move easily to a call, to eat from my hands and to be as approachable and quiet as I can make them. 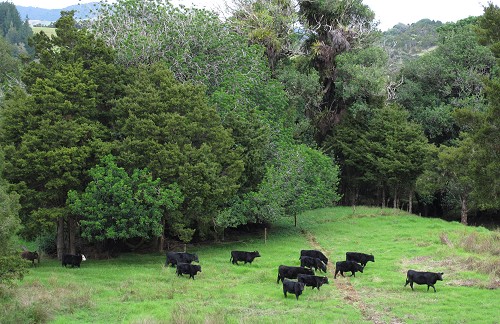 I walked up to the tank with my new portable electric fence unit, to liven up the new little fence, and watched down the hill as the heifers found their way across the stream and spread out around the blackberry patch in the fresh grass.  They would once have wandered up through those trees to their left, but we've fenced off that corner to protect the Puriri trees and the river bank.  The biggest tree there, has two main trunks and a large population of epiphytic lily plants.  The disturbed soil from the water pipe trench is visible across the grassy area.  The tree reserve is where Stella and friends built their huts last summer.  The trees in that mid-ground area are all Puriri and Totara. 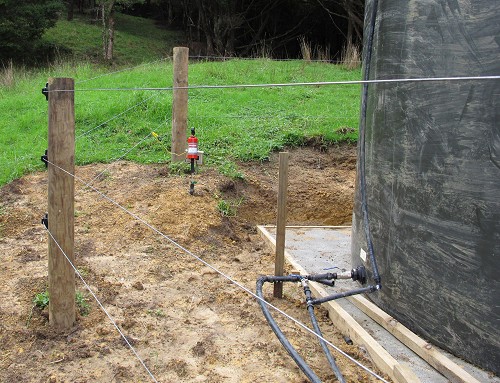 The little electric unit, with its solar panel.  The solar panel puts out just over 10V in bright sunlight, and around 6V in the shade or in bright cloudy conditions.  There are four D batteries in the unit as well, which will run it for much of the time, but the solar panel will make those batteries last a lot longer, by supplying the power during most days.

Next summer we'll probably sub-divide this paddock, which will bring a fence down this hill, which will provide an electric feed to this fence. 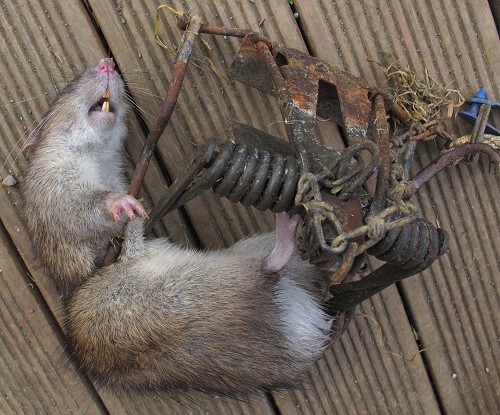 Stephan caught yet another rat down by the pond where the chickens live.  We need a Pied Piper!

We've had some disturbed nights lately, again caused by rats.  Not live ones now, but dead and decaying, causing a disgusting, stomach-turning stench.  Unfortunately they've obviously returned to their nests in the ceiling to die after eating the poisoned bait Stephan laid for them, and since we can't get to them, we just have to wait until the process advances to a stage where the rats no longer smell.  It really has been foul.

Since buying Stephan his birthday present, I've been thinking I'd really like an MP3 player too!  I have so many downloaded radio programmes - documentaries, stories, etc. - on my computer which I don't listen to when I'm sitting here working, but would play as I walk around the farm, if I had the right sort of device.  My internet research led me to the best priced model being available in a shop in town, so I went there today and bought one. 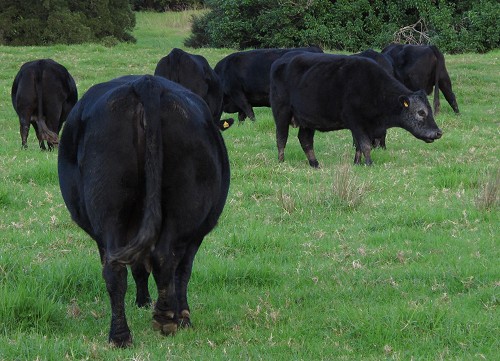 Later in the day I moved the 37 cows from the Bush Flat, down along the lane and across to Flat 4.  I was startled by that odd-coloured cow in the mob, until I worked out that Squiggles must have been rubbing her head in the pile of Limerock which is still sitting at the end of one of the lanes, awaiting use.  The cattle are very fond of rubbing their heads in things. 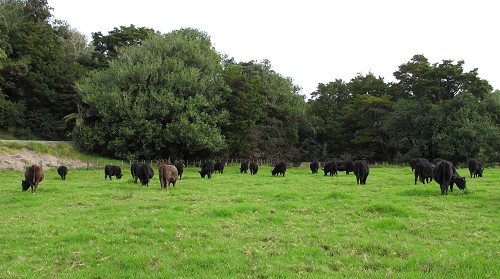 These cows move around a lot!  Today it was down to the yards so I could give them all their copper injection.  They're well overdue for this one, having not had one for six months or so over the summer.

The copper challenge on most farms is less during summer for two reasons: firstly the animals are eating more food, so even if trace elements are present in only low quantities, they get sufficient amounts of them; and during summer, the animals are less likely to pick up soil with their feed, the iron content of which binds with the copper, making it unavailable to the animals.

However, on this farm the pasture itself contains high levels of iron, so the copper is never readily available to the animals.  Four injections per year keeps their copper stores at a good level. 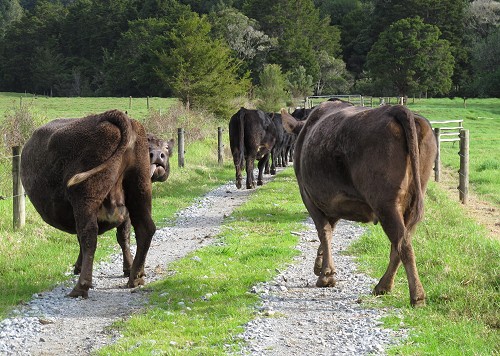 A little before dark I went to check the young heifers, who were all standing around quietly together.  I managed to get 634 to stand still while I brushed the back of her tail for a while.  She's a daughter of monitor cow 475 and one of Quanda 09's sons, which I have suspected is the reason for her being rather stand-offish.  But some of them just take a bit more time to tame than others, and this is a very good sign of progress being made.

I spent much of today writing an article for the local newspaper, The Northland Age.  A week or two ago I received an Angus bull sale catalogue with the same old spin the Association used last year to smudge the bad news about the genetic defects in the breed.  Last year I tried to get something published before the annual round of bull sales, but failed.  None of the general news media ever picked up this story beyond a couple of vague articles when it first came out.  Since then, something has stopped them from making the problem widely known.