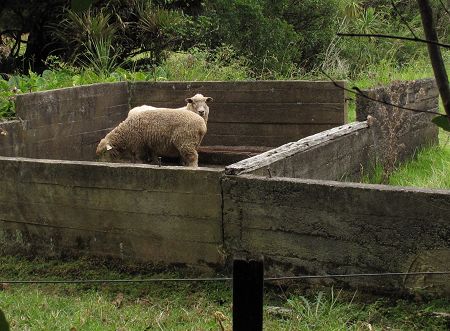 I reckon the other sheep told these two to "get a room!"

I counted seven sheep at the other end of the paddock as I rode past, so stopped for a moment to peer past the old pigsty, thinking the other two might be behind it. Suddenly the ram's head popped up above the concrete wall, as he mounted Dotty, then disappeared again. I snuck down through the trees by the road to take this picture of the two of them - a paparazzo moment. 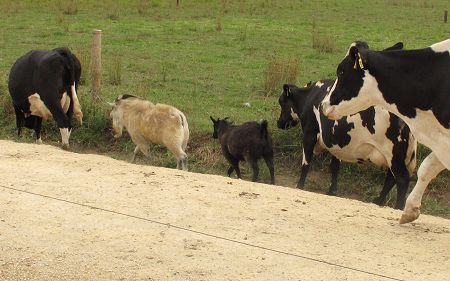 We were invited to a wedding this afternoon, so set off with just enough time to do the trip - and then had to stop for several minutes while this herd of cows (and some other hangers-on) crossed the road.

Goodness knows why a couple of goats were part of this mob. The cows didn't look too bad, considering the drought, but they looked as miserable as most dairy cows. Maybe it's their long faces. 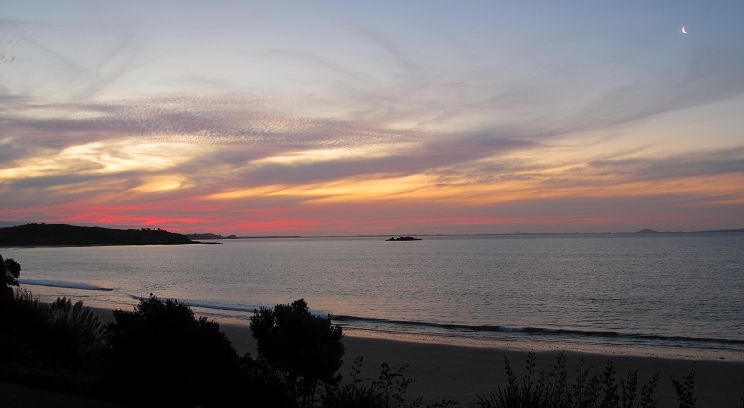 The wedding was beautiful, of course, I ran into lots of people I haven't seen for years, including the elder sister of the bride, who was about eight or nine when we last met. Apparently I was a fabulous, fascinating teenager for her as a child. I had no idea.

The bride said to me at one point, "I know you don't really approve (of marriage)..." which caused me to give some thought to the matter - I've obviously said enough over the years to give her that firm impression of my attitude! She's right, I don't like marriage as an institution, because of its long history as an instrument to keep women under control. I would never marry because I would then be somebody's wife, which would carry, for me, a whole load of implications which I'd find tremendously oppressive. I suspect it would give permission to others to make similar assumptions about my position in my primary relationship and the world, which would also be uncomfortable for me - although that obviously happens anyway.

I was a firm supporter of the creation of the Civil Union option in this country, which was fought for very strongly as an option for same-sex couples to have their relationships formally recognised. I also thought it would be the choice of many younger people as a new option, without all the historical baggage of traditional marriage, a chance to form a new tradition of equality in relationships. But that hasn't happened. I know of only one or two female-male couples who have chosen Civil Union over marriage. Maybe young people think they won't buy into, or be caught up in, the traditional patterns of married life; maybe they really are that enlightened and clever. And maybe simply changing the ceremonial beginnings of a relationship wouldn't change as much as I think, but I'd still give it a better chance.

In the mean time, we keep being invited to weddings and I really have no problem about cheerfully supporting loving and committed relationships between people who are respectful of each other. Each to their own. 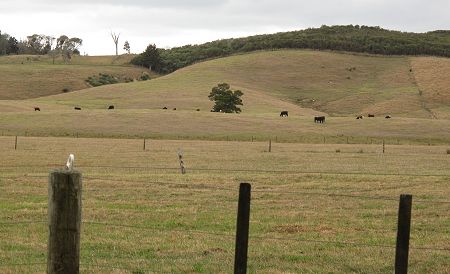 It was quite hard to get up early this morning to go to the Annual General Meeting of Far North Organic Growers Group.

These are hills near Pamapuria, behind the orchard on which the meeting was held. 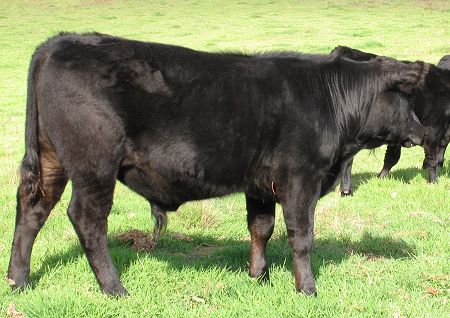 We came home and separated the bulls from their mothers. They're still babies, at just over five months old, but they're a group of animals I simply can't continue to feed adequately unless I wean the calves.

Cows and calves together require quite a lot of feed - for milk production in the cows and for the calves to be getting a good diet for growth. Separately the calves can have the good stuff and grow well, but the cows need only maintenance levels of feed when they're no longer required to produce milk.

The bulls must be separated from the other calves, but I don't have enough feed left for them and their mothers together. 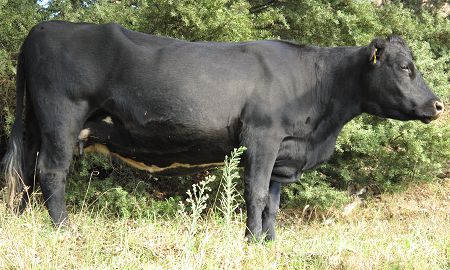 I don't think I knew that 545 had such a large white stripe along the underside of her belly. Her mother was white-faced 416, so lots of white is no great surprise.

She was standing on the side of the hill over the road, while I looked up from the roadside below. 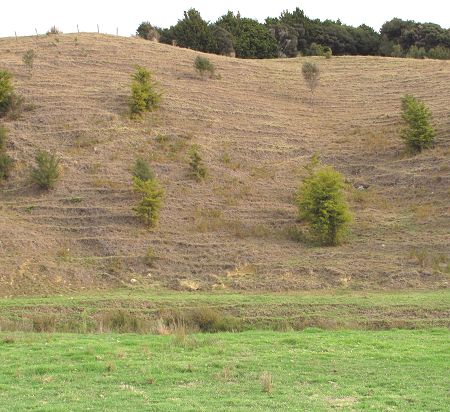 I went over to Aurere, near Taipa, today for a "drought recovery" meeting. The title seemed a bit hopeful, really. Over the weekend I heard on the radio that the long-term weather forecast suggested that we couldn't expect any real rain until May. At the meeting the data presented showed that the chance of rain in April had increased from 30% to 50%. I suggested that didn't really look very hopeful at all, but was assured it was a great improvement. I don't think a statistical shift of 20 percentage points is anything to get excited about, when there's still a 50% chance of no rain. Too depressing.

This is the hillside I photographed a while ago when there were some cows in the paddock. The hills look worse, and while the Kikuyu on the flat part of the paddock has obviously grown, it has done so by a tiny amount for an eight week break. Normally it would grow many inches in that time. 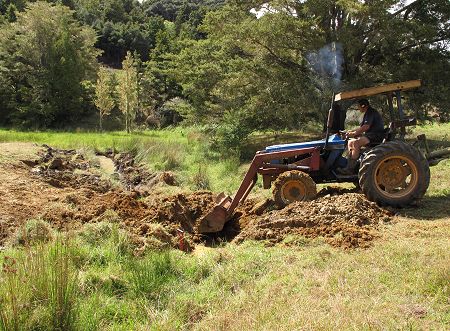 This culvert has been causing some problems, so today Stephan dug up the concrete pipes which carried the water under the track (or mostly didn't, lately), and installed a long PVC pipe in their place. The ongoing dry weather makes some of these jobs far easier than they would be in an ordinary season!

When out doing my late-night check on the insemination mob tonight, I became aware of an unusual and acrid smell which seemed to be sitting in the back of my throat. There was a steady North-Easterly breeze blowing and the smell would have been coming from the mill in Kaitaia. We're very fortunate that we hardly ever smell it, because the winds are rarely from that quarter.

Meaningless clouds. The North-Easterly breeze brought us no more than a scant drizzle.

I was on the phone enquiring about the cows' blood test results when I heard Stephan coming up the driveway, obviously in some distress! He was holding his hand in a way which generally spells trouble - he'd fallen over and dislocated a finger. I tried pulling on it as hard as I could, but couldn't move the joint, so we went to town to get help. A very nice doctor saw him almost immediately and pulled and pushed on the dislocated joint with a great deal of force. When the finger cracked back in to place, the doctor shot backwards on his wheeled office chair, with a look suggesting he thought Stephan might belt him! It was a very funny moment - although not so much for Stephan, who was for a few minutes in agony, as his finger reacted to all the trauma!

On our way out of town again I stopped in at the Vet clinic to clarify some details about the blood results. Two of the cows had a low positive antibody count for Neospora - 545 and 539. They share a grandmother: white-faced 46. When 545's mother 416's twins died before they were born eighteen months ago, we had her blood tested and she was negative for Neospora, so I did not expect this result.

The BVD tests for the cows were negative, thankfully. The bull's tests go through a slightly different process, and have not been received yet.

Next step: we'll test the other living members of the Neospora positive family and see what that tells us. 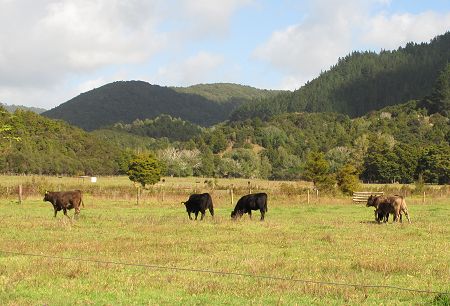 We took more blood from more animals today. Then I drafted seven cows and their calves out and separated them for weaning. These are the cows on my cull list, which I need to get off the farm as soon as possible, before we get too short of grass, and before all the dairy cows start going to the works and the meat schedule consequently drops.

I dropped the blood samples in to the vet clinic, wandered around town for a while, then spent hours and hours sitting in the show-room of the mechanics to whom I'd taken the ute to have some work done. They took about two hours longer than they'd said they would. Fortunately I took some writing work to do, so it didn't feel like a complete waste of time. 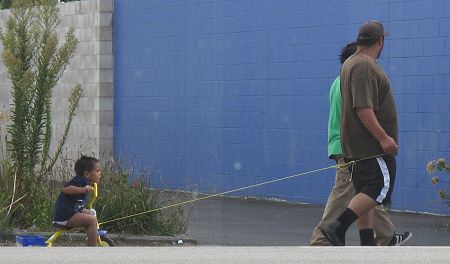 These people wandered past on the other side of the road when I happened to be looking out the window. 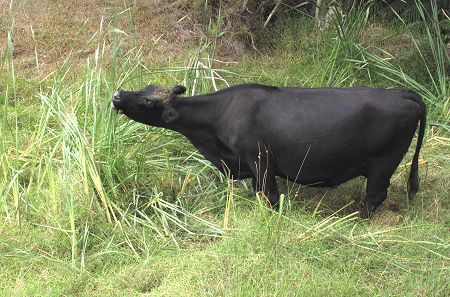 Demelza is keen on a wide variety of foods, many of which I'd rather she didn't eat, like Puriri bark and this Raupo. I haven't noticed any of the other cows eating this stuff before.