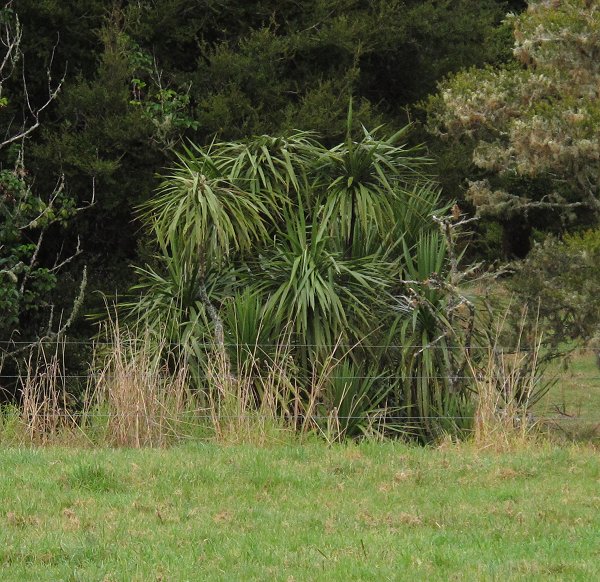 That Cabbage Tree doesn't look right to me; I hope it's not beginning to show the signs of the disease which affects and kills them.  I noticed it when looking across the Pig Paddock from the cattle yards.

It may be that there have been too many Pukeko sitting on top of it, there being a large family of them living around the Pig Paddock and the yards.  Whenever the Pukeko are startled, they all take to the air and flap up into the trees along the riverbank.  This Cabbage Tree (actually it's several of them together) grows on the island a sheep was recently marooned upon.

Lots of people think Pukeko don't fly, but they're excellent fliers, once they're up in the air.  However, they're dreadful at landing, so they just crash into the trees and grab whatever they can get hold of, then rearrange themselves to roost comfortably.  I imagine that their long-toed feet would quite quickly flatten the top of a Cabbage Tree, should they happen to land in it often. 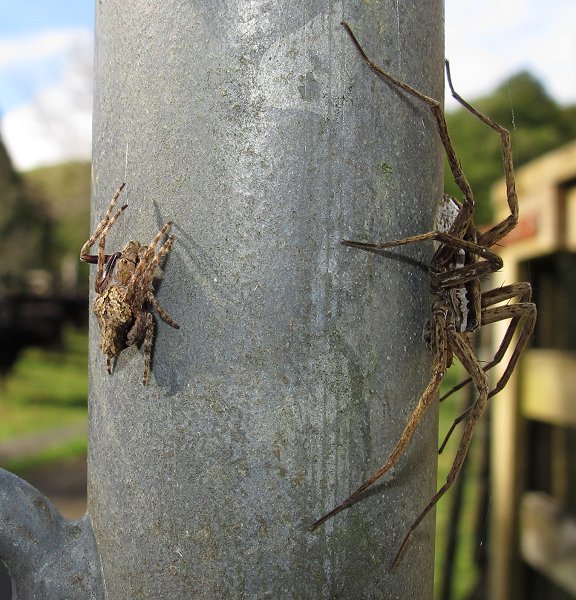 Two spiders nearly got squashed as I reached to close the gate on the cows in the yards this morning.  They are distinct species, I'm fairly sure, so why they're here together I cannot imagine.  The smaller one is an orb web spider, like those which inhabit my greenhouse; the other is a Nursery-web spider, as photographed recently.

(If you think I'm wrong, please tell me.) 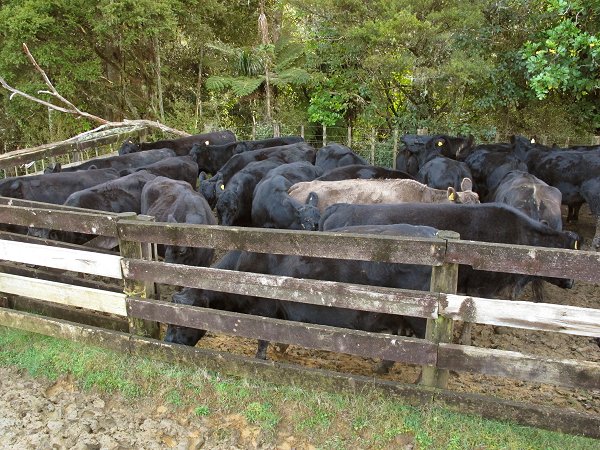 All the cows up in the yards.  I think it's safe enough (see 12 June)to let them out into the roundabout area again now, so I brought them up in one lot and let them out the right side of the raceway when I'd given them their Copper injection.  This is the second Copper shot of the winter and I should have enough time before calving to give them their third in another six weeks. 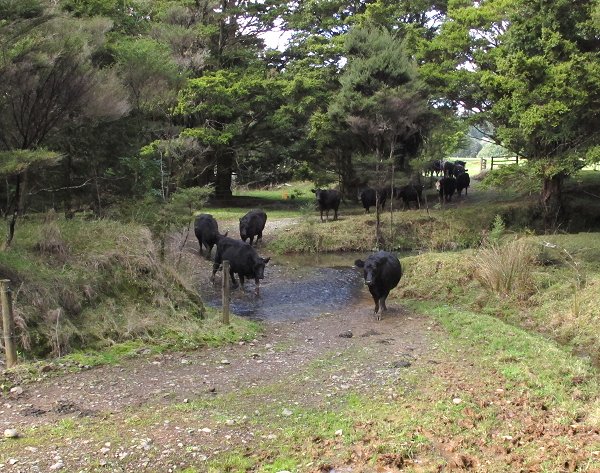 Afterwards they wandered quietly out to the Frog Paddock, 545 leading the way over the stream, then Athena 72, who's usually first to follow me.

In the early afternoon we brought the nine heifers from across the road for their injections.  Half of them had come off the roadside bank and across to the gateway when a car came around the corner and despite Stephan standing in the middle of the road, waving the driver to slow down, she seemed to be taking no notice at all.  Seeing 571 about to come off the bank and onto the road, I leapt forward with arms outstretched and my movement must have roused the driver from her daydreaming and she skidded to a halt.  It gave me a hell of a fright, thinking I was about to see 571 collected side-on.  I've seen that vehicle before, so it belongs to a valley resident, but obviously not someone who's aware of the sorts of things you need to look out for on rural roads!

I haven't been out and brushed my cows for some time.  It does me and them good, but there are always so many other things to do and I've forgotten to make the time to do it lately.  I stood around with them for a couple of hours, brushing nearly everyone and pulling knots out of their tails. 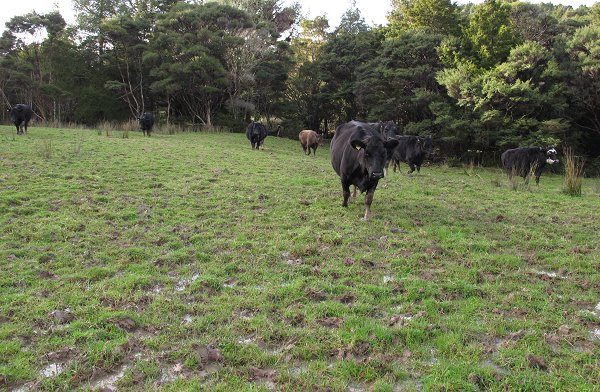 How long a paddock lasts the cows in the winter depends on many things.  After so much rain recently, it is the ground conditions which concern me most: the good areas are getting badly pugged by their feet.  I know it will come right again - or at least as right as lumpy ground can be - but in the mean time I try to keep the damage from getting too bad. 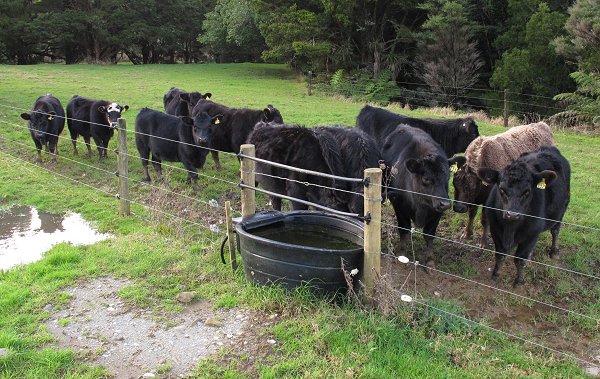 Even the yearling heifers are making things muddy.  People on lifestyle blocks often seem concerned to keep lighter cattle to prevent ground damage and pugging, but a cattle animal, even if it only weighs 300kg, is putting 75kg down on the ground on each foot on an area no larger than about 10cm/4 inches square: if the ground is wet, it's going to go through the grass and make a mess. 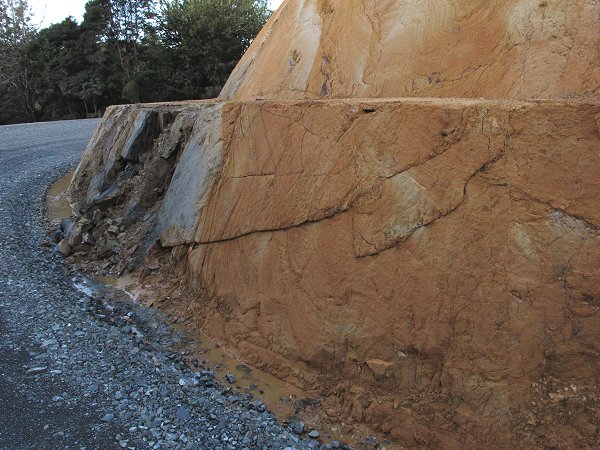 The corner on the road has begun its move downward, at least in places.

We took Finan to the vet today, for his annual vaccinations against the usual things cats can catch.  I keep vaccinating him because of the number of feral/stray cats around us.  I also asked the vet to test him for FIV (Feline Immunodeficiency Virus).  The vet who operated on him last year and I had discussed checking his status because of all the fights he'd had in the bush.  He does not have it.

There was some strident bellowing from the heifers' paddock this evening, I think from Squiggles' daughter, Ivy 112.  Maybe this is puberty time for her.

Wednesday the 1st of August 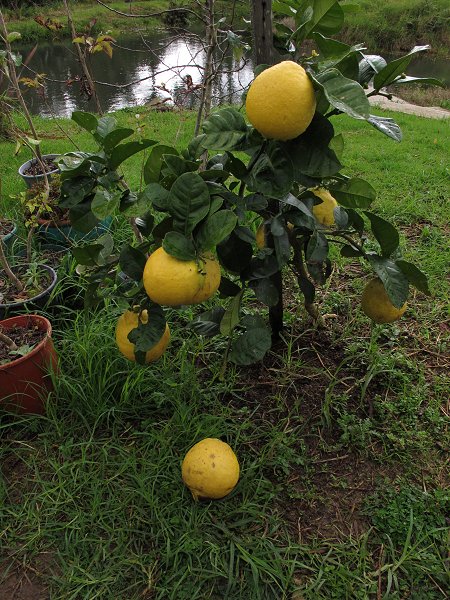 Elizabeth and William gave me this lemon tree a couple of years ago.  I think I probably ought to have unburdened it a bit this season: those fruit are ridiculous. 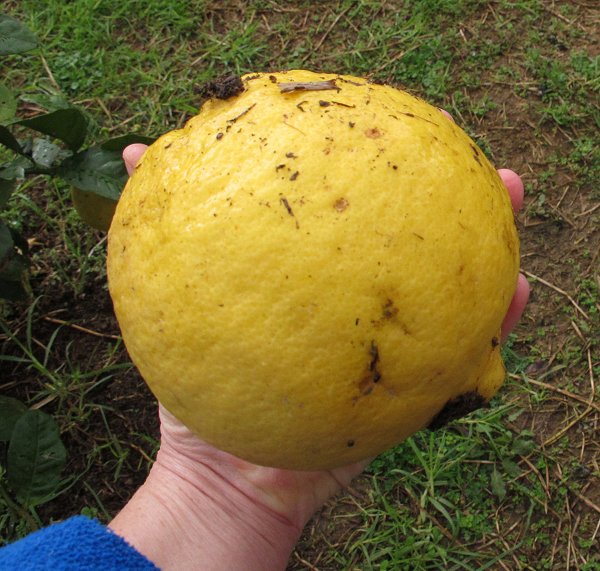 You'd need a bucket of Gin and Tonic to fit a slice of lemon like this!  Maybe Stephan will make some of the delicious lemon cordial from it.  I think one on its own will suffice for the recipe which normally requires four lemons. 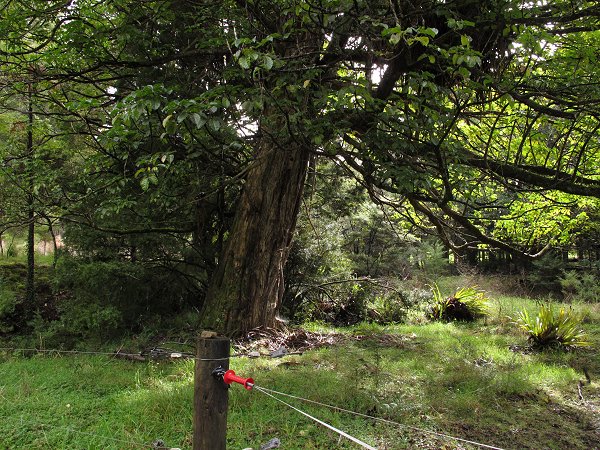 Every time I look at this tree, I spend some time trying to decide whether or not it is gradually falling over.  I am sure it is - look at the small almost vertical branches which are growing out on the right-hand branches: they were truly vertical before and now they're on a lean, indicating that the whole tree is going over.

Or not.  I can also see, on closer inspection, a fairly thick vertical branch as well.  Time will tell.

The cows went from the Pines Paddock into the neighbouring Small Hill.  When I went along to check on the trough, I watched some of them crossing the stream and going up the bank.  It looked like things were getting a bit dangerous.  The cows have worn channels in the bank by frequent walking and in one spot they've created a high island of hard clay between two tracks.  The channel on each side is about the same width, but there must be some subtle differences in what's under their feet.  The pinch comes on their hips as they try to pass through, making it a bit of a struggle for some.

Here's 517 as she tried to decide how to negotiate the narrow bit: 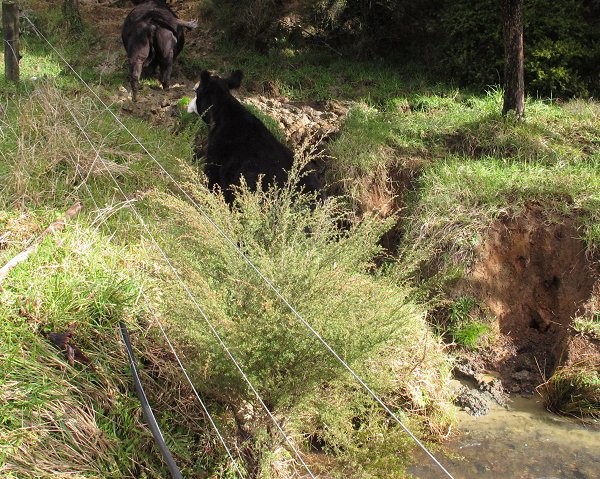 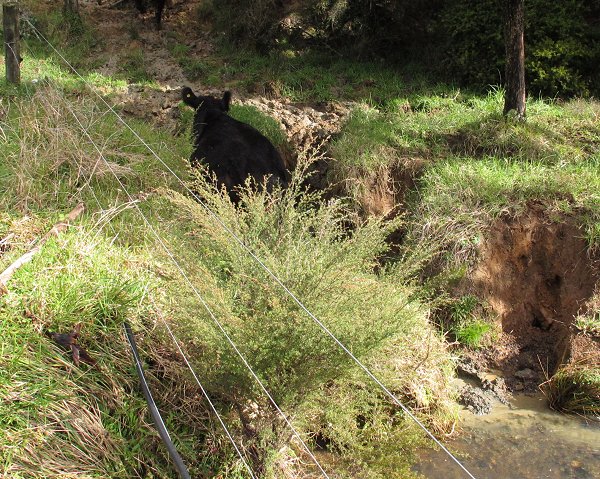 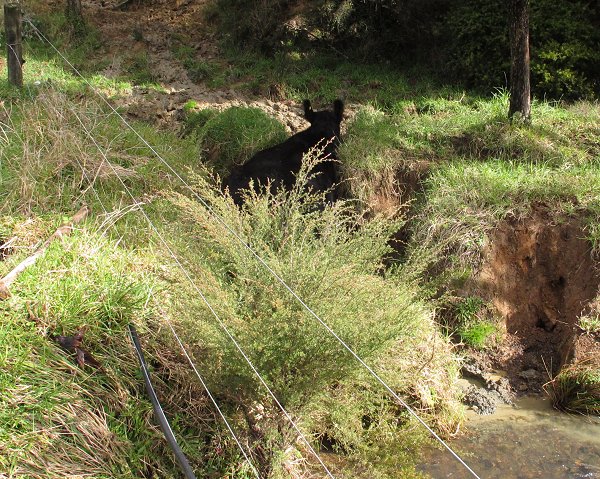 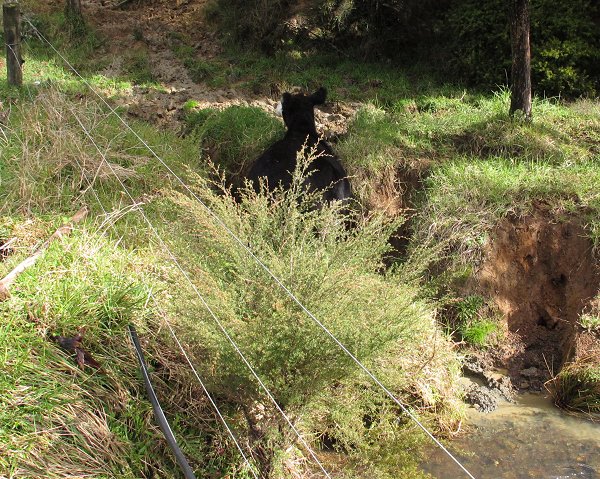 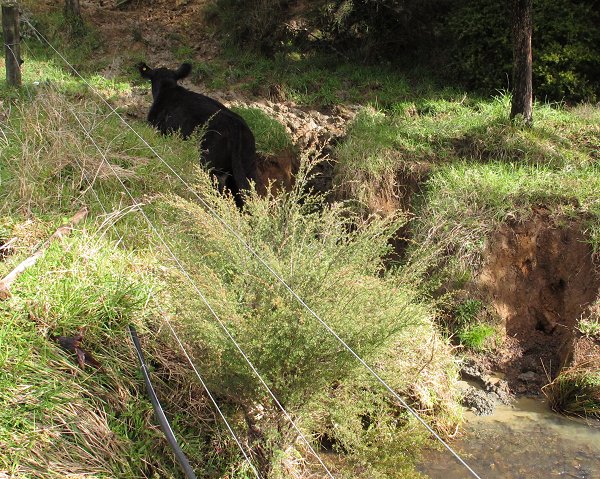 When I got home, I asked Stephan to take a shovel out there and dig out the centre part of that track, to reduce the danger of any of the cows getting stuck.  They need to be able to move their hips to get through and if a wide cow got wedged there, she couldn't do much about it and she'd have cold feet until I found her! 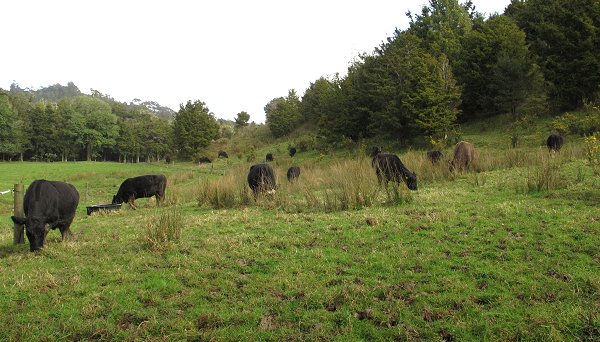 The cows, most of which went to the other end of the paddock to see if there was anything better on offer, gradually made their way back toward me.

Up to my right is the gully where Eva was stuck and away to the left in the picture is the Bush Flat. 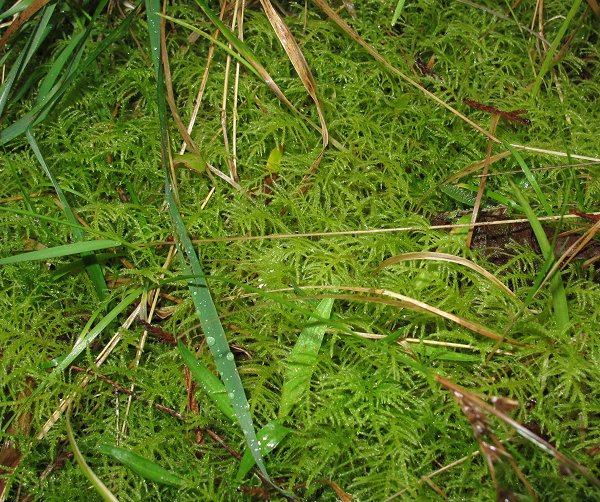 I found this very pretty moss in the Bush Flat reserve area, in a light place which was formerly part of the pasture area.

There's a Tree Fuchsia in the reserve, which I've been watching for the last three years and went to check on today, wondering when it might flower.  This still isn't the year. 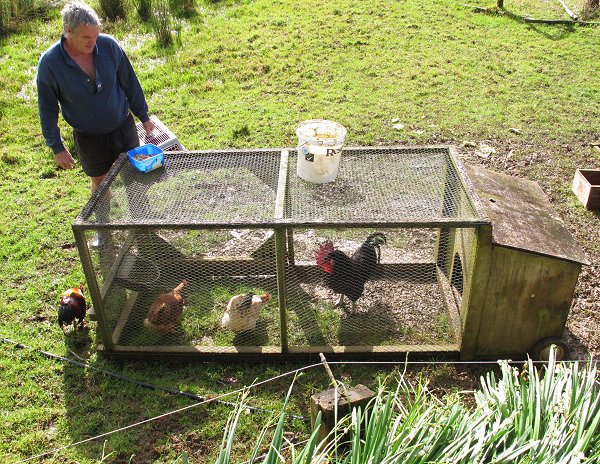 Lilo and Peter wanted rid of their large Black Orpington rooster and offered him to Stephan for bait, or for our hens.  We thought we might as well try him with the hens for a while, maybe breed some more chicks this year.  The little bantam rooster at the left end of the cage hasn't produced any kind of young at all, primarily because he chooses to stay in the cage with the enclosed hens, rather than living with the couple of free-ranging bantams up by the old shed.

Little rooster's days are now severely numbered, since the two will fight and it's obvious who'll come off worst. 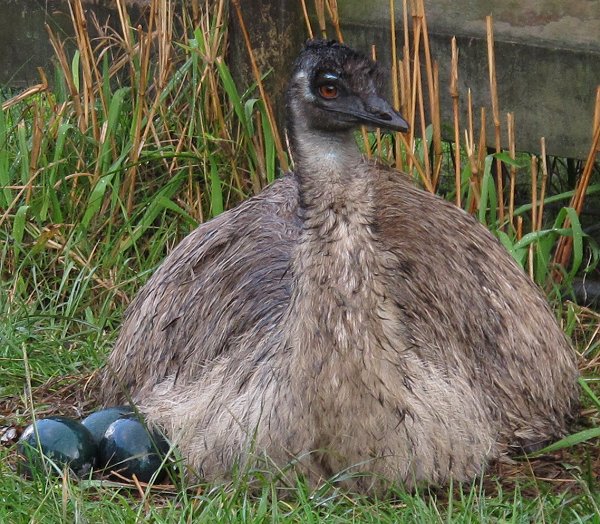 Today's weather forecast looked the most hopeful of the next four days, so we headed up to Kaimaumau, on the northern side of the Rangaunu Harbour, north of Awanui, to visit Raewyn and Ross.  We first met them at a Far North Organics meeting in 2008, held at their property.

We had a lovely lunch, sitting out in the sunshine, but as we finished it began to rain and then just got heavier and heavier!  When the rain lightened up a bit, we went out to see the animals - some very nice Murray Grey cows and their beautifully grown calves, the Emus (the males currently sitting on nests of huge green eggs) and the pair of Ostriches, which didn't look quite as impressive as they normally would, with their waterlogged feathers slicked down. 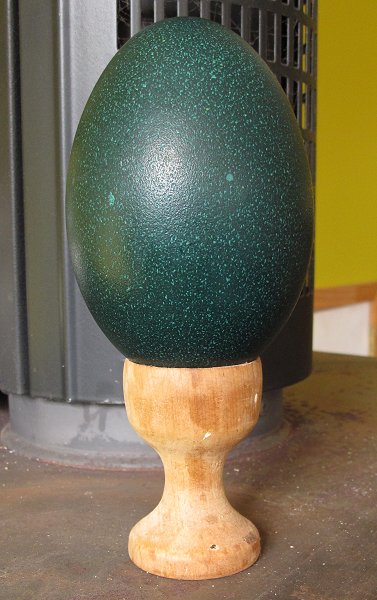 Raewyn gave us an egg for our dinner and some Emu sausages!  I think we'll have to make an omelette out of this; it's a bit much for one person. 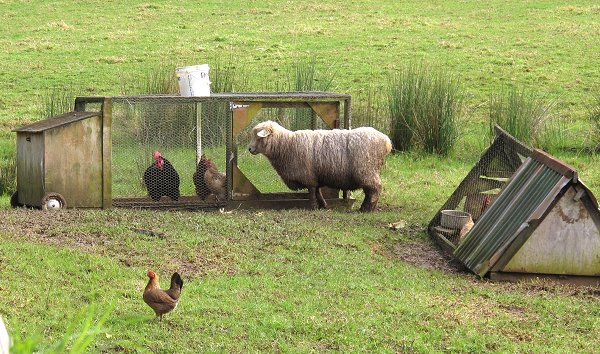 I thought this sheep was investigating the new rooster, but while it was there, it had a good rub against the cage. 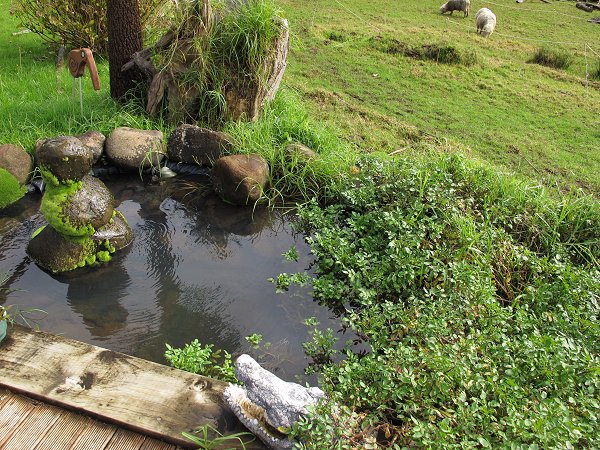 The watercress is taking over the little pond!  We keep giving great bucketsful away to people when they visit, but that's not making much impression.  It'll only be good for eating for a little while longer, because it's looking like it'll flower quite soon. 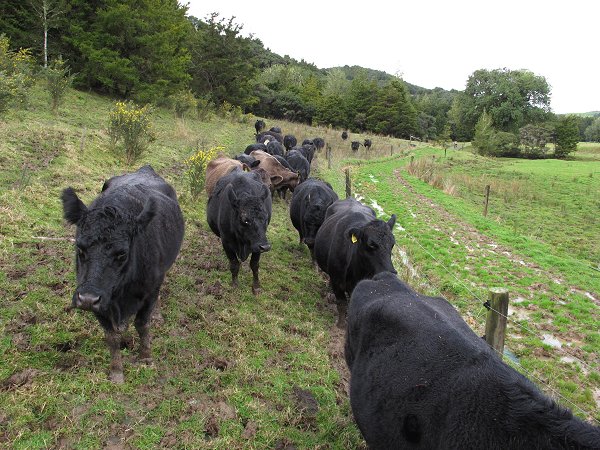 Walking along the bottom of the Small Hill, with the cows following me towards the gate to the Back Barn, I spotted a bit of blue in the mud, which turned out to be my missing cow grooming brush.  I knew I'd lost it but it surprises me that it's in this paddock. 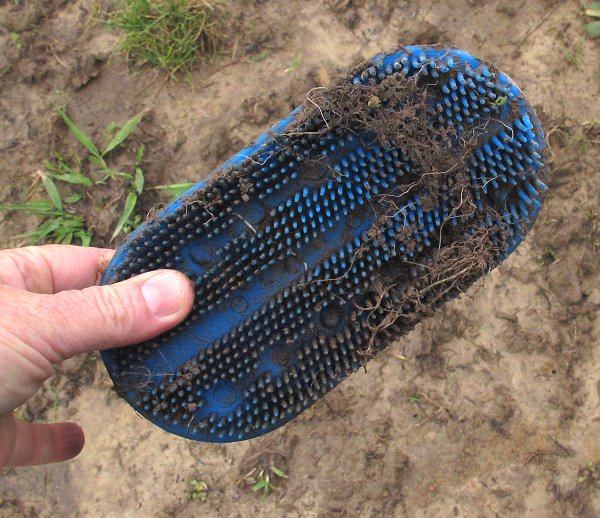 I knocked it on the top of a post to get the mud out of it then realised that it wasn't hair which was stuck between the plastic bristles, but fine grass roots.  It must have been here for a while. 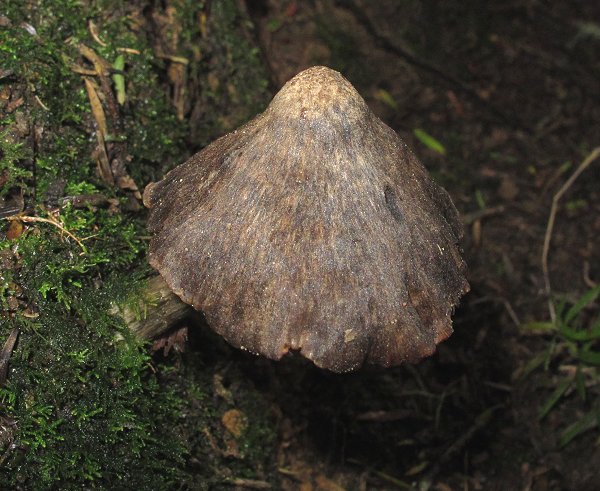 Not all of the fungi are bright and beautiful.  This one was growing out of the bank where I walked Over the Road coming back down from checking on the heifers. 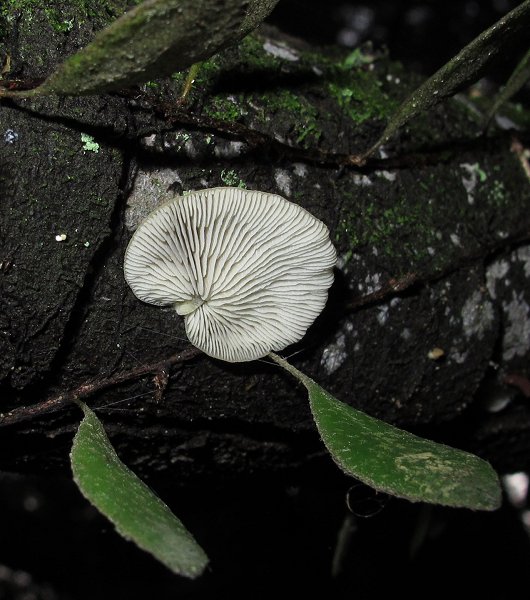 A few of these were growing out of Totara branches above my head.  In the summer time it's generally far too dry for fungi to grow so far off the ground, but in the winter, it's wet everywhere and they proliferate in all their variety.