The week beginning the 4th of August 2012.
Saturday the 4th 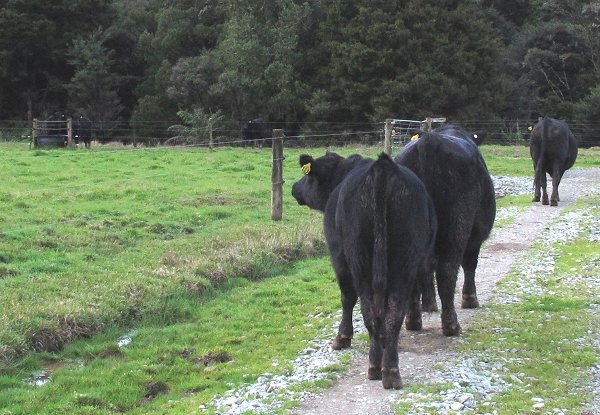 Mike and Stuart came out for a while this afternoon, so it was late in the day by the time I got around to moving the bulls - out of the Mushroom paddocks and over onto Jane's place for a while.  The yearling heifers all came to the fence for a bit of a flirt as the bulls went past.

By the time the other three bulls went across the stream, there was so little light left that we could only just count them up into the paddock at 6.19pm.  The days are getting longer; a few weeks ago it was as dark at ten to six.

I don't use Jane's paddocks any more for any of the pregnant animals, after Queenly 23's still-birth three years ago, which I strongly suspect may have been caused by something she ate there.  I'm also no longer prepared to risk putting any of the non-pregnant heifers or cows over there, since Jane's family bring their large dogs with them and allow them to use the paddocks as their toilet; I'm far too nervous about Neospora and dogs.  If the bulls were to contract Neospora, they can't pass it to the cows and #90 has it anyway, from his mother. 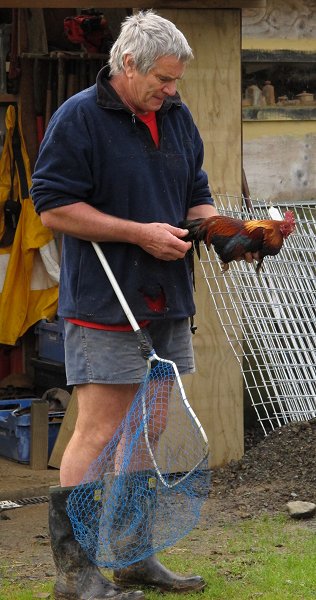 It was small rooster's last day today.  He was given to Stephan to use for bait some three or four years ago, so he's had an extended stay of execution.

Stephan tells me he saved the feathers. 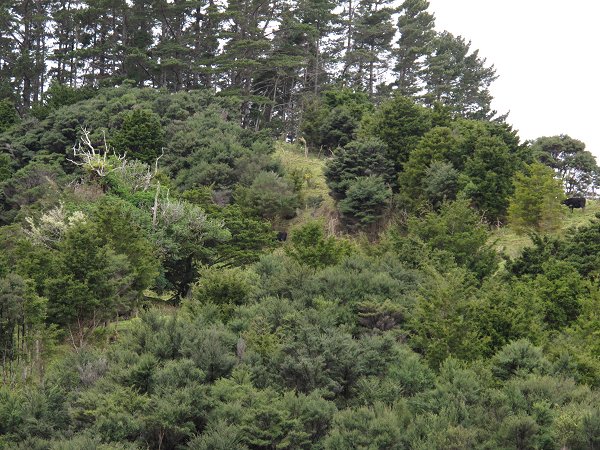 I walked around the Big Back Paddock to check the cows this afternoon, found most of them down the bottom, but had to walk up the right side of the paddock to find the rest, since I could only count about three amongst the trees from my viewpoint at the bottom of the hill - there are two (one and two halves, actually) visible in the picture.  I can only tell where the third is because I spotted her in the larger copy of the photo, where only her legs are visible.

I was pondering as I walked, the Michael Pollan book I'm reading.  Pollan suggests that humans in times past, in always having had contact with the animals we eat, were able to "both honour and eat animals without looking away. ... nowadays it seems we either look away or become vegetarians."  I was thinking about this as I approached Ida 75 and looked her in the eye.  While I don't spend every moment with my animals, nor see them every day, they have my attention to some degree, in some way, every day of the year.  I give my animals my all.  I wondered if Pollan's suggestion that one cannot look animals in the eye without ceasing meat consumption is because most people give nothing to the animals they're briefly looking at, so some feel they can ask nothing of them?  An animal rights activist would presumably argue that they give animals much, but that's a different sort of giving than that which I'm practising.  Animal "rights" seems to be an anthropomorphic assessment of what animals want.  Animal welfare and well-being, on the other hand, are things we should all fight for, because in many farming systems and on many farms, animals aren't guaranteed either.

Becoming informed about how farming is practised, contributing to informed debate about how it should be practised, would be a huge step forward (or is that back, into a greater awareness) for any society which depends heavily upon animal protein for its nutrition.  Not everyone can or has to be involved in the production of food, but it is irresponsible to completely ignore how it is carried out.  Some people will do dreadful things if nobody ensures they don't.  Some dreadful systems are developed by some people whose primary motivation is profit.  When the "raw materials" in those systems are living, breathing, sentient creatures, nobody should be looking away!

At the same time, we must be careful to ensure that information debated is reliable.  The agendas of those who present information about farming are not always clear and some depictions of some aspects of farming are dreadfully skewed by commentators who have either misunderstood what is seen, or deliberately intend to mislead those who are viewing their presentations.  I well remember the video I watched of a slaughtered animal which was said to be jumping in pain after its throat had been cut.  But the animal was dead and its movement was due to electric stimulation of its muscles as part of a tenderising process, with visible wires leading to electrodes attached to the carcass.  Comments posted with the video indicated that most viewers had believed the inaccurate, and frankly ridiculous, commentary.

If you see anything in this site, or anywhere else, which concerns you or raises questions, please feel free to email and ask about it. 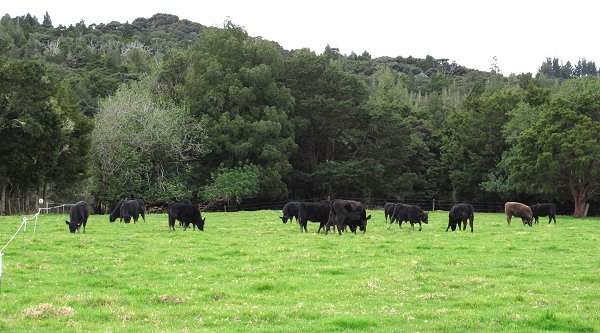 This afternoon the twins and Zella joined the group of eleven heifers.  The Windmill Paddock hasn't been grazed since the sheep were here at the end of June, and it's a paddock I traditionally use for the first calving cows, so after this mob has grazed it, I may leave it to grow again until the calving cows come to use it.

The twins fitted in well, size-wise, with the others.  They've grown very nicely. 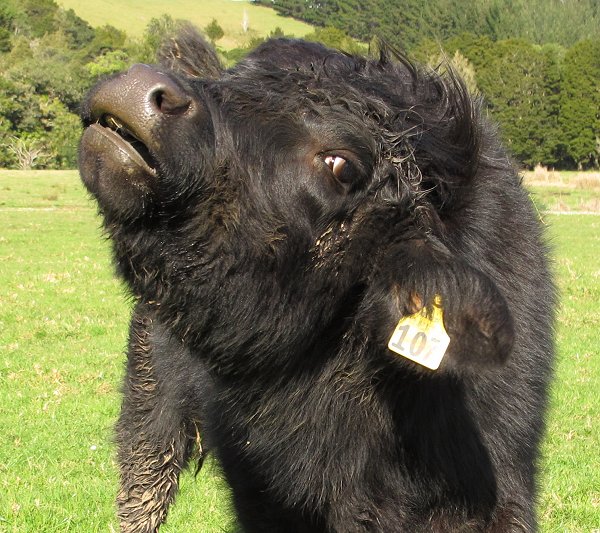 Be careful how you look at me when I'm holding the camera, or I might take a picture of you looking really silly!

I was trying to get a good picture of Queenly 107 and she turned and came over to me, waving her head around in a playfully belligerent manner.  I fed them some Puriri leaves the other day, so now she thinks I carry treats for her every time I come into the paddock.

Some of the cattle have whites around their eyes, and some do not. 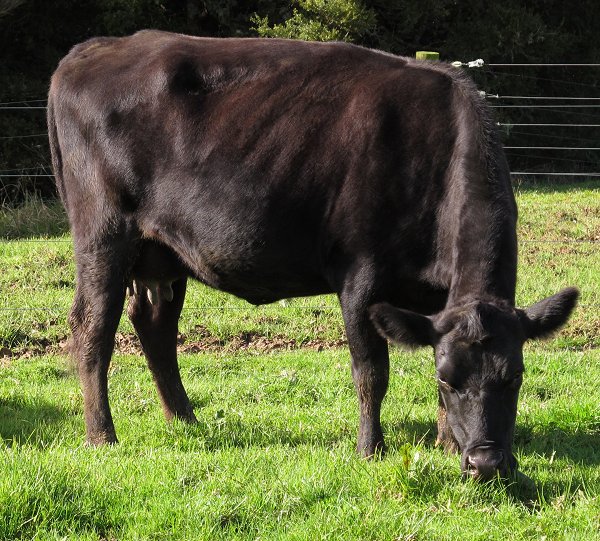 I brushed Zella all over.  She's a stroppy madam with the youngsters, always aggressively shoving them out of her way.  I don't think she appreciates such immature company, but as we want her to spend most of her time away from the rest of the herd, it would be silly to send her out to join the others - and her own age-group are the heifers over the road, which I have yet to test for BVD exposure. 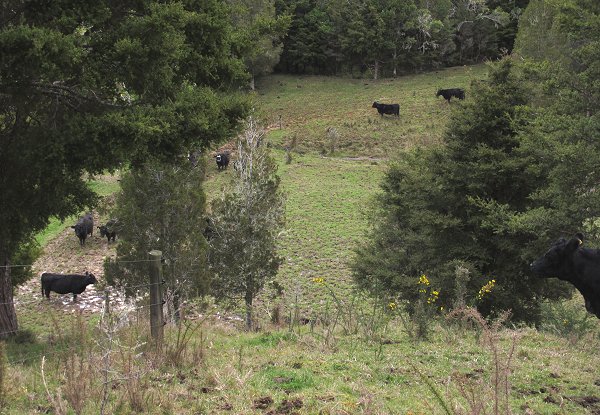 It's August, hard time of the year, and the cows get a bit less feed in each rotation through the paddocks, because there's less grass growing.  I try to hold them as long as I feel I can, and I think I manage things a little better each year.  But the recent large dumps of rain have not helped, making the ground conditions very boggy, which means lots of grass gets trampled into the mud.

The cows are starting to lose condition, but they've held for longer than they often do in winter. 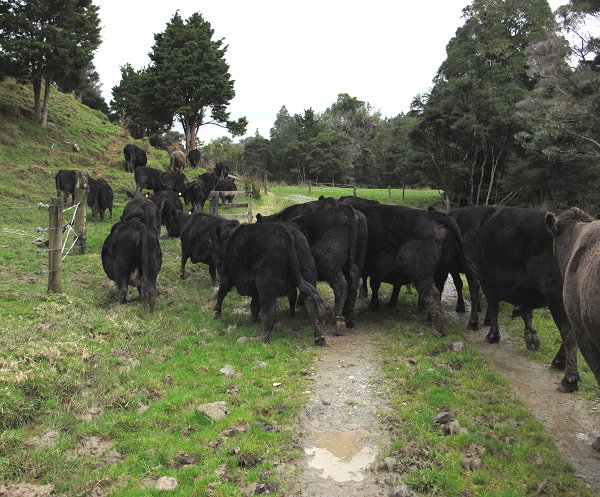 As soon as I'd ensured everyone was present, I walked them around the tracks to the PW, on the other side of the central hill.  I've been managing a 21 day rotation around the farm over the winter, so far, although some paddocks have needed longer than that to grow enough grass to make them worth grazing. 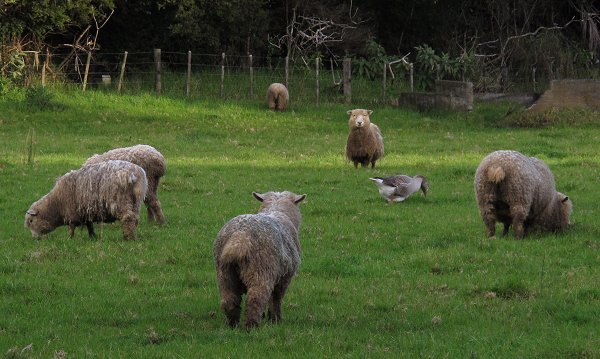 I led the sheep out of the House Paddock and down across the bridge to the Pig Paddock this morning.  Yvette got lost and wandered up through the open gate to the big shed and their usual grazing area in the Chickens Paddock and I had to go and retrieve her.  I thought they'd all follow me, but Yvette lost track of where the others had gone to, because she was following along so slowly.

A little later on I came past and saw that Madam Goose had found her way to join the sheep.  She doesn't seem to like to go far from the Chickens Paddock, but just across the stream seems to be acceptable.

[The Chickens Paddock is now as indicative a name as the Windmill or Pig Paddocks.  The chickens are no longer there.]

As I finished moving the sheep, dark, threatening clouds were gathering and just before I got back inside to turn the computer off, a startling flash of lightning and huge clap of thunder hit, flicking the power off in the house, nearly frightening the life out of poor Finan, who's a nervous cat at the best of times.  The rain which quickly followed began with quite large hail stones, creating even more alarming noise to frighten the cat.

The power came back on, but Jane rang a while later to say hers was off, so the lightning must have hit the transformer around the corner which supplies her place. 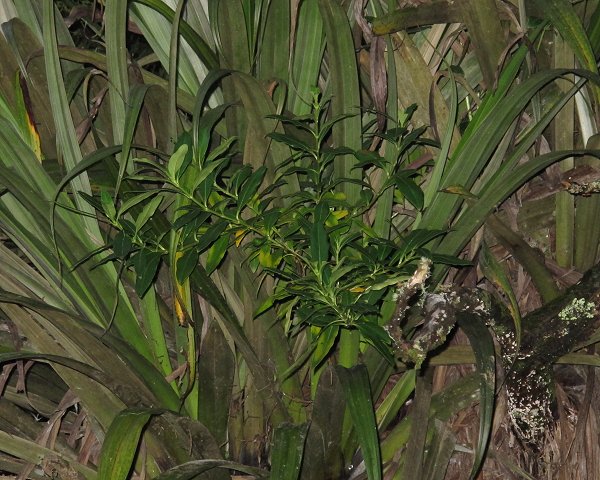 Over the road I spotted this epiphytic plant, which I think is Karamū, which isn't an epiphyte in its usual growing habit.  All manner of plants grow up in trees in these epiphytic lily plants, because the seeds birds drop are so readily caught in them. 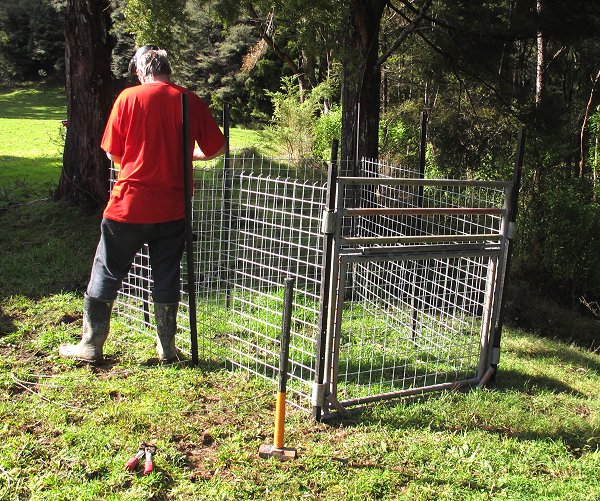 Stephan took the bits of pig trap out to the Back Barn and set it up today.  The primary bit of construction was in the door which will be set open and needs to swing shut firmly behind any pig which enters the trap.  Welding galvanised steel is tricky, apparently.  If we need another trap, next time Stephan might buy galvanised mesh for most of the trap, but make the door out of ordinary steel and just replace it when it rusts out. 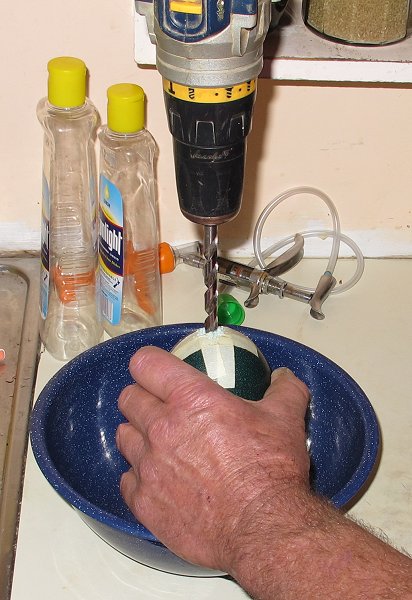 Time to eat the Emu egg!  We put some strips of masking tape across the wide end of the egg so the drill didn't slip and I set it in a wide-mouthed glass with a bit of paper towel for padding, inside a large bowl, in case it all went wrong.  Stephan applied a sharp drill bit to the shell and drilled a hole. 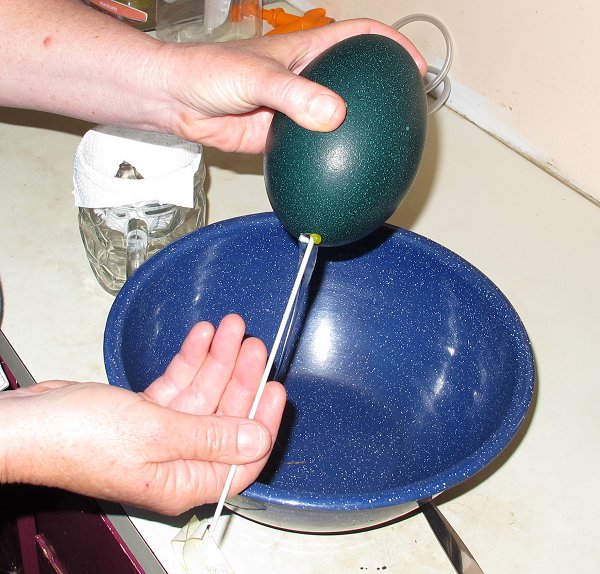 Using a clean knitting needle, I broke up the yolk. 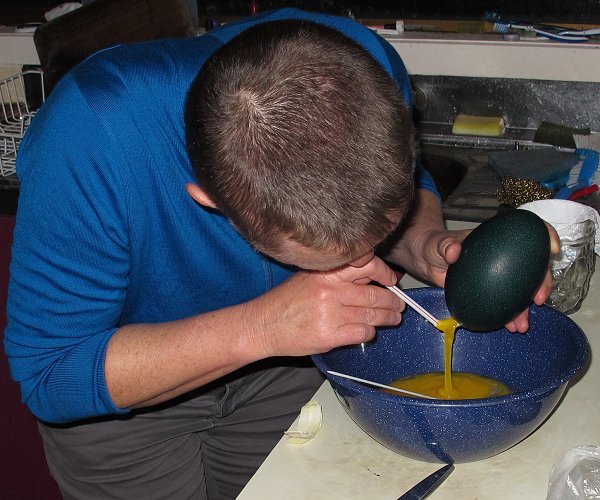 Every other time I've blown an egg, I've put a hole in the other end as well, and blown the contents out.  With only one hole, we needed to get air up into the shell to force the contents to exit.  The hole was large enough to fit a bendy straw in, through which I blew air, and for the egg yolk and white to flow out into the bowl.

It was a lot of egg!  Stephan made an omelette, with bacon, onion and tomato and we had to eat two large helpings each, to finish it off! 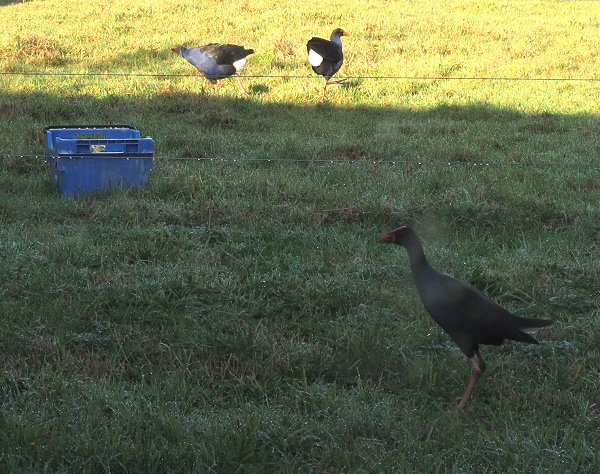 Every time I take pictures through it, I write that I need to clean my office window!  I still haven't done it.

These were the first birds outside my office this morning.  They don't usually come so close to the house.

A little later there were a collection of hens and the very large black rooster, which are, for some reason, all wandering around the garden.

Finally a couple of tiny Goldfinches, eating seed heads from the various flowers growing on the "lawn".  They're very sweet, with their little fluttering flights from one place to another.  If I hear the cat door flap, I have to open the window and frighten the birds away, before Finan stalks and catches any of them.

A correspondent suggested that it would be good to have an interactive way of accepting comments on this site.  I looked into a guest book but my time is limited at present and the facility available on the server where the site resides had no way of ensuring the exclusion of masses of spam entries, so I gave up on the idea for the time being.  I enjoy receiving people's comments on my writing and photography, but as I'm not an avid "blog" reader, I don't know how valuable such an opportunity would be to anyone else.  Feel free to enlighten me.