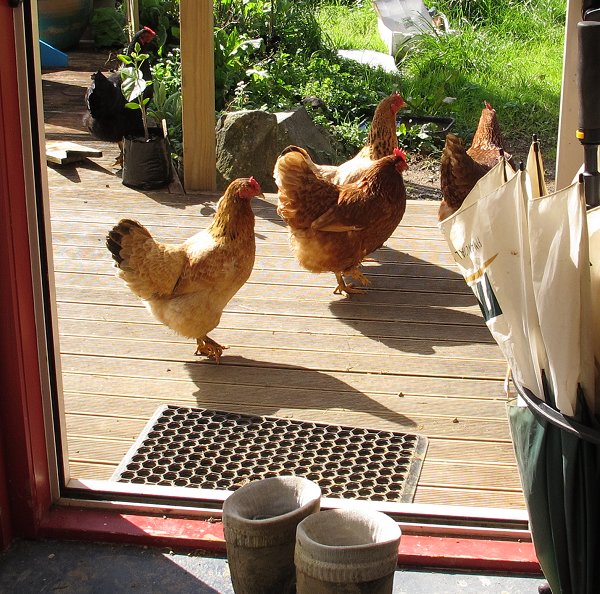 Who do they think they are?

The outside runs in the chickens' cages get awfully muddy at this time of year, so Stephan's allowing them to free-range around - and the garden's hardly a great event at present, so there's not much damage the birds can do to any of it.  They range out into the House Paddock sometimes, which is good to see.  I'm not so keen on them crapping all over the deck! 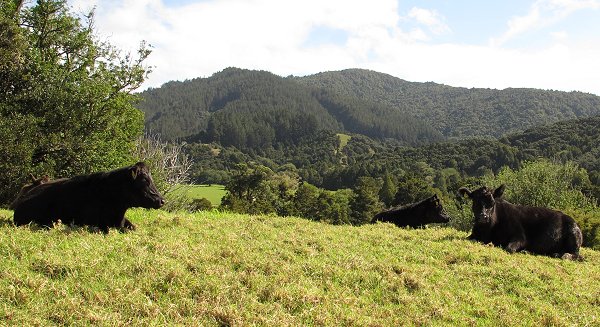 The cattle really appreciate it when the sun shines and they can lie around in the warmth.

These are the heifers on the hill Over the Road.

I used the warm, fine afternoon to prune the fruit trees.  The lemon tree and the Mandarin, were both quite disorderly and now look much more open.

We went to Whangarei for me to have a Molemap done - a close skin photography monitoring of freckles and moles, the purpose of which is to help me monitor my skin for anything which might be a developing melanoma.  It's now more than seven years since I had a melanoma removed from my leg, so it looks like I'm probably safe from any further problems related to that one, although I need to keep an eye out for any others developing.  Looking back, I see I didn't write much about it at the time; I think I was feeling quite shocked by the discovery and quite frightened about my future when it was still new to me. 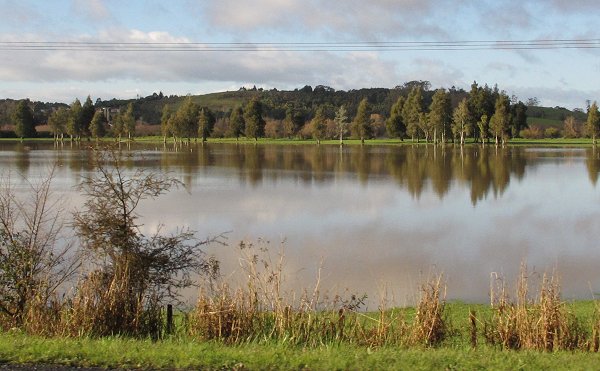 There's been a lot of rain around Northland, this water lying in the paddocks between Moerewa and Kawakawa.  It's pretty, but I'd not like to have to farm this area. 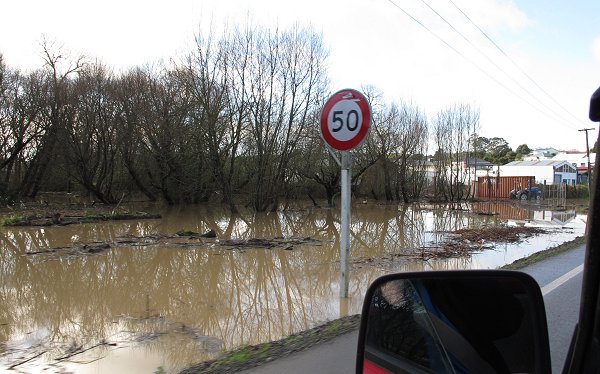 Coming into Kawakawa it looked like the road may not have been passable at all times in the last day or so. 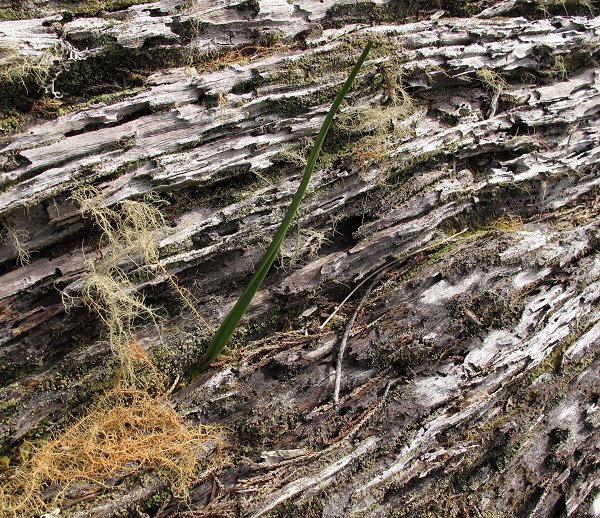 On the big fallen Puriri trunk in the Big Back paddock, the orchid plants I first noticed last year are now in their second or third season.  They might even flower this year!

The trunk fell early in 2009 and I suspected, having found sun orchids growing in Puriri trunk remnants all around the farm, that having stood for so many years collecting wind-borne seed, it would grow many of the orchids when it fell down.

The wetland in which the trunk now lies is not yet fenced off from the cattle, so I'll have to put a tape around it to protect these plants, if I want to see what their flowers are like. 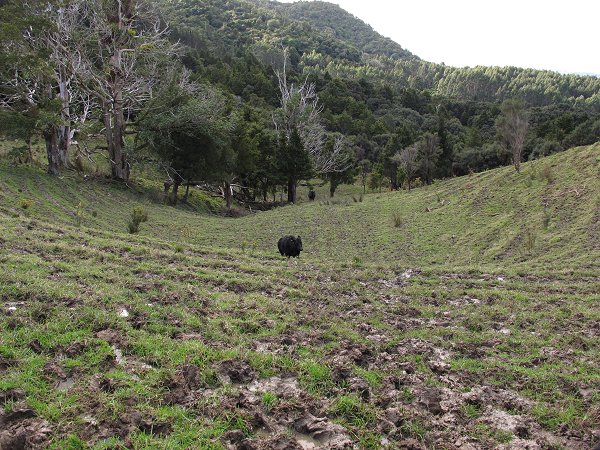 Demelza and Ranu were last to come up out of the Middle Back paddock this afternoon.  Demelza is always slow, always has been - she's the black dot in the centre of the picture, between a couple of trees.

We've had an ordinarily wet winter in terms of how much rain has fallen, but because most of it came in large amounts all at once over the last two or three weeks, it seems wetter under foot than usual, even though it probably isn't. 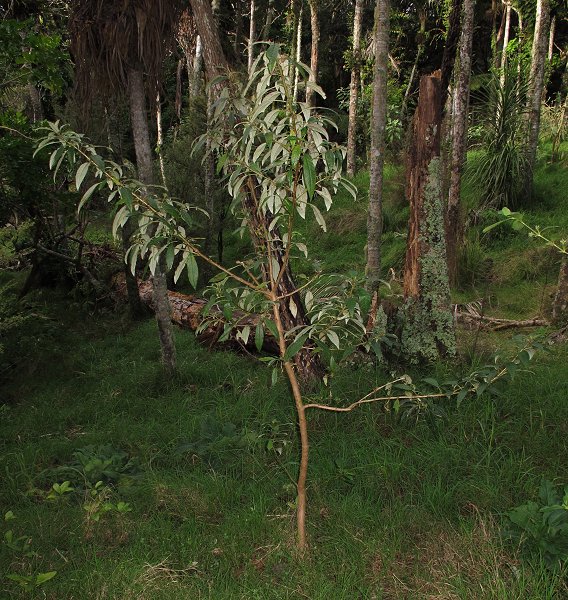 I've only recently discovered this Tree Fuchsia (Fuchsia excorticata) in the PW reserve area, when I walked through a few weeks ago.  It is presumably too young to flower, yet, but should do well in this open area with good light.  It's nice to find them.  Some of the others I've discovered have been in places where their roots have been prone to flooding, and they've not survived. 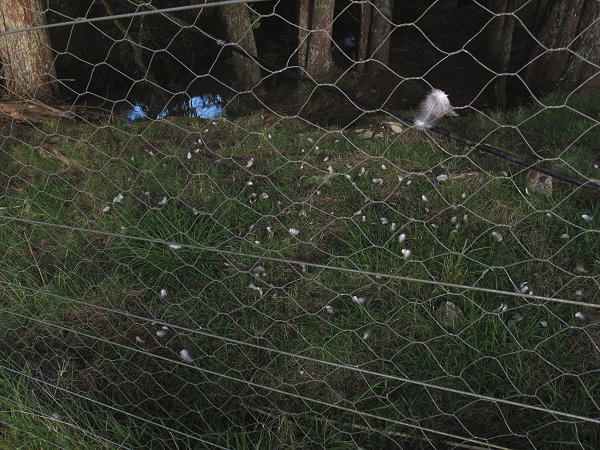 Stephan and I were walking down the driveway, heading out to see the heifers Over the Road, when a fast movement caught my attention - although I didn't see what it actually was.  I went over to the wire netting which forms the boundary between the end of the Chickens Paddock and the driveway, to see what had caused the netting to vibrate.  These feathers were strong evidence of the collision of a Kukupa (Kereru, Native Wood Pigeon) with the fence.  Why it would have tried to fly through the netting, I do not know.  There was no stunned bird on the ground, so it must have bounced off and flown away again, presumably with a bald sore spot! 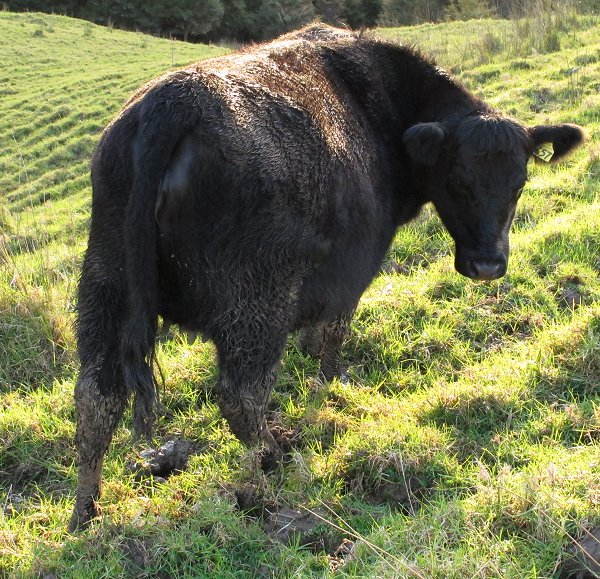 This is 657, up on the hill.  She's the biggest of the R2 heifers and is in pretty good nick!  She has a rounded tail-head, and the shiny skin around her vulva indicates a smooth lot of fat around her rear.  She's not too fat, but I'd not want her to be too much better than this as she approaches her first calving.  Her fat level indicates to me that her contemporaries are getting enough to grow well, even though they don't look quite as good as 657. 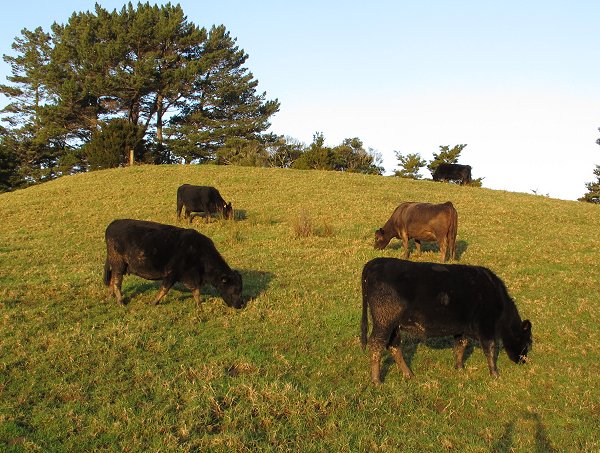 I estimated that over the winter these nine animals would need this hillside paddock, plus three down on the rest of the farm, but they've stayed over here for the whole winter so far and still have enough to eat.  That's a relief, since I've needed all the grass on the rest of the farm for the cows and young heifers.  I'll use this year's well-recorded data to better plan for next winter. 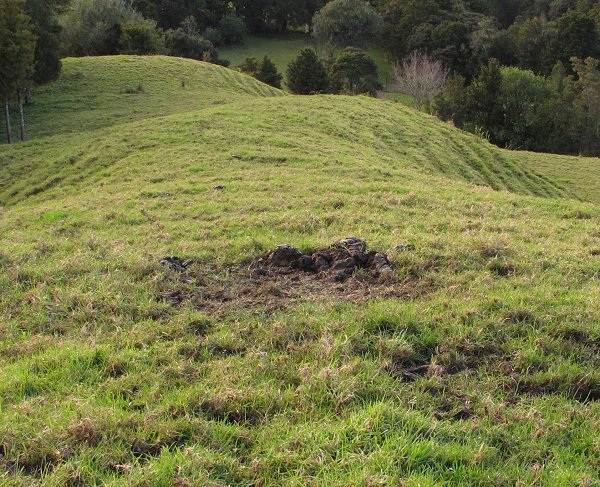 Walking down the hill, we came across a collection of flattened spots like this one.  It looks like the cattle have been returning to the same spots to settle and sleep - or this may be a one-night spot where an animal has got up to turn around and change sides a couple of times, but lain back down on the warm spot she'd already created.  Clever cows.

Walking down the driveway on our way home, we heard a huge noise from over on Jane's place, where the bulls were obviously very excited about something.  The two big bulls had for some reason started bellowing at each other from either end of the property, where they were separated by a lane of around 50m in length.

I recorded Joe 90 (17 seconds of video) because it's hard to convey the energy of bulls in that state in still photography. 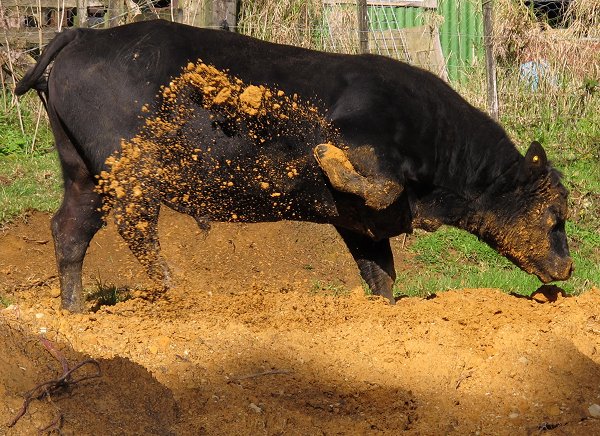 Joe 90 again, on top of the earth pile which I'm now regarding as the cattle's sand-pit, since they enjoy it so much.  We brought #90 and his two little companions back from Jane's because they were still making such a racket this morning and I was concerned that the single strands of electric tape might not be enough to keep them in their separate areas, if they got too excited.  At some stage during the morning, I walked up to Joe 90 and scratched his back; despite all the bluster, he's still a relatively placid animal. 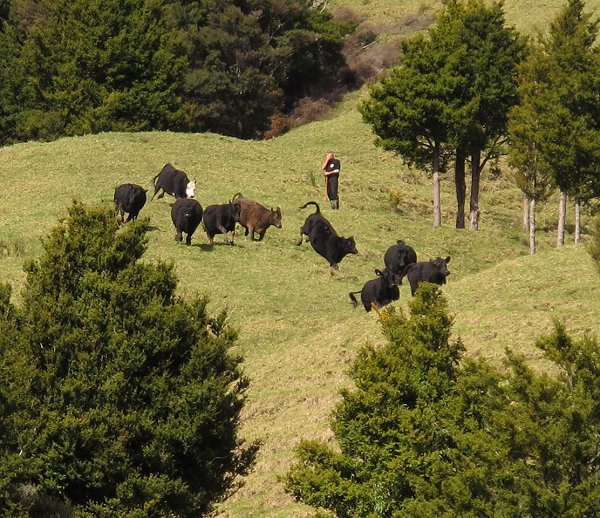 Stephan walked up to get the heifers from Over the Road while I was doing something else and I watched as they set off down the hill - Stephan looks like he didn't want to watch them. 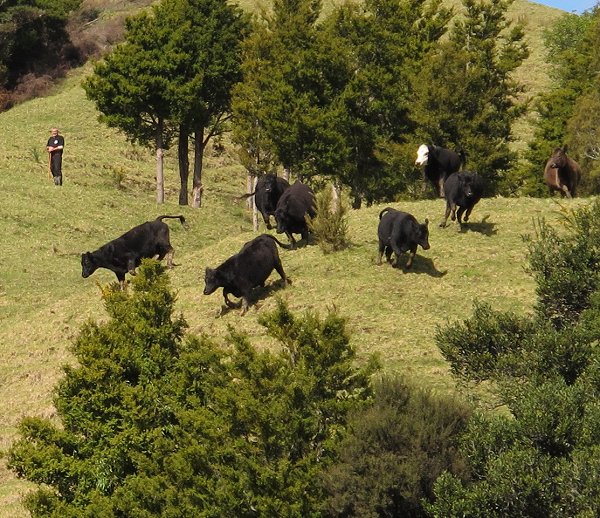 It's an alarming sight, watching 500kg animals pelting head-long down a steep slope, but they obviously enjoy it immensely. 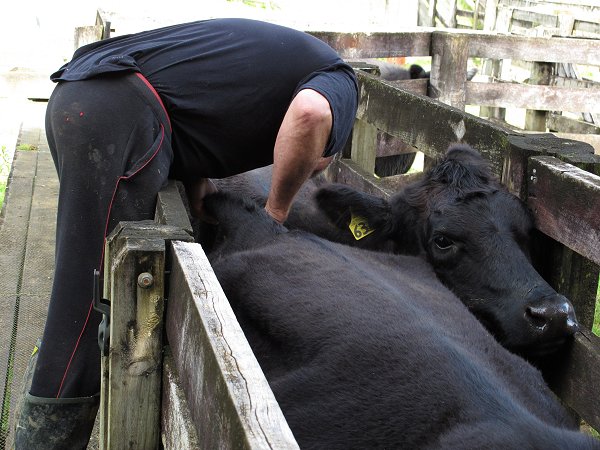 The point of today's trip to the yards was yet another needle, this time to take blood out of each of them to test for BVD, to ensure they didn't catch it from that trespassing animal a few weeks ago.

Stephan's very good at blood testing, producing perfectly clean, well-filled tubes of blood from each animal.  We had one spare tube, which he used right at the start when 571's blood wouldn't flow and he lost the tube's vacuum, but fortunately the second attempt and all the others went smoothly. 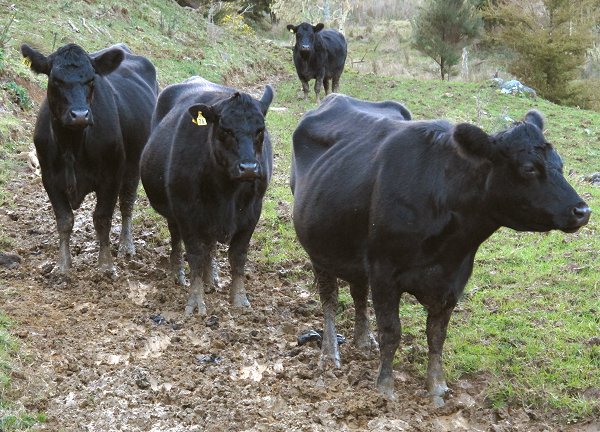 There's the usual mix of body condition in the cow herd this year.  456 at the back, is a mature cow and doing nicely enough; Eva 81 at the left of the front three is getting a bit light - this is her second calving and she's now coming up to four years old, so old enough to be in with the cows, as long as I keep an eye on her condition; Damara 74 is the same age as Eva and fat, having calved at two, but then aborted her second pregnancy, so this is her second calving as well.

At the front is 545, mother of last year's twins; she started the winter in lighter condition than the other cows because of that extra milking demand, but she's also a fairly thin animal anyway.  I hope she's not carrying a surprise double load this year as well!  Two calves, two years in a row would be a bit much for her to deal with well.  She's eight weeks away from calving, so there's a little time left to put a bit of condition on her still.  When the grass starts growing a bit faster, I may pull out the thinner cows for priority feeding. 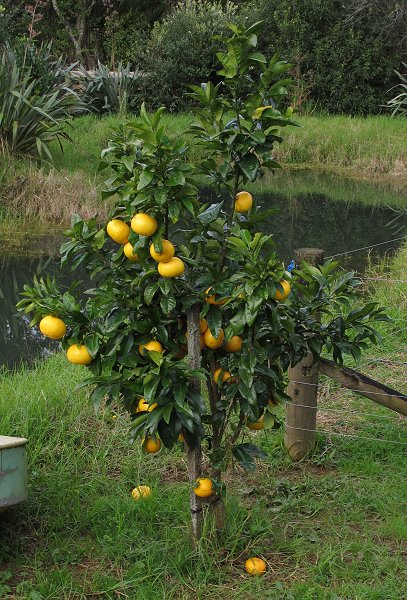