The week beginning the 7th of April 2012.
Saturday the 7th 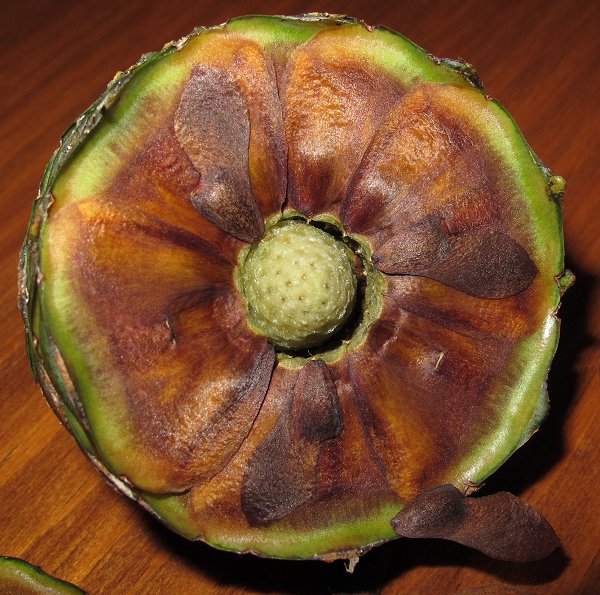 Stephan brought me a green Kauri seed cone a few days ago.  Because of the Kauri Dieback disease problem, we have to be very careful about this sort of material transfer from one area to another; but there is no evidence at this stage of the problem being present over at Whakaangi, where this cone came from.

The cone has been sitting on my computer desk and I accidentally bumped it with my mouse and it fell apart. 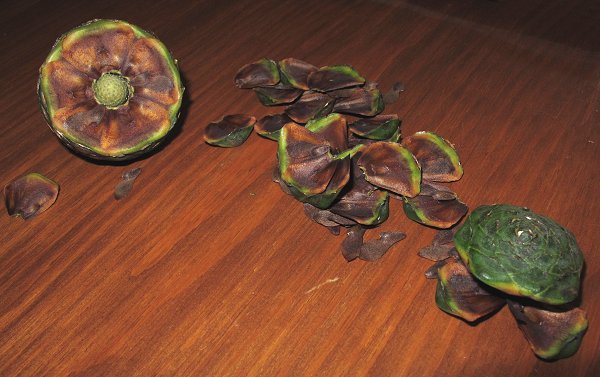 Kauri seeds are viable for only a few days, so I immediately sorted them into those which were still alright, and those which had already gone squishy or flat, then planted the good ones.

Last year I planted seeds from a similar cone and had an excellent germination response. 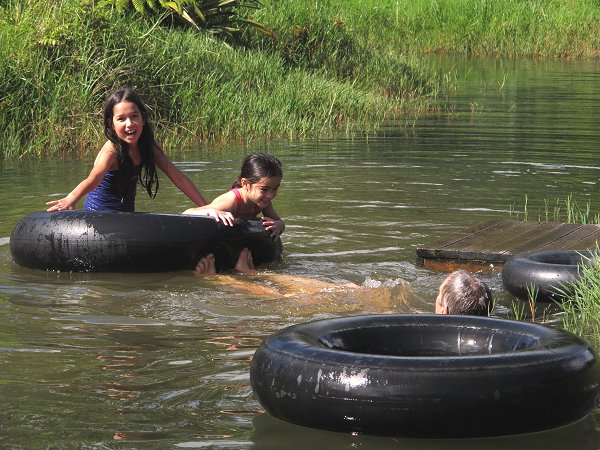 These are the two lovely daughters of Justine, who is back in Kaitaia to visit her mother.  Our parents were good friends when we were children and although I was a few years older than Justine, I remember her very well.  We met again, briefly, at her sister's wedding a couple of years ago, but this time we've been able to spend more time together. 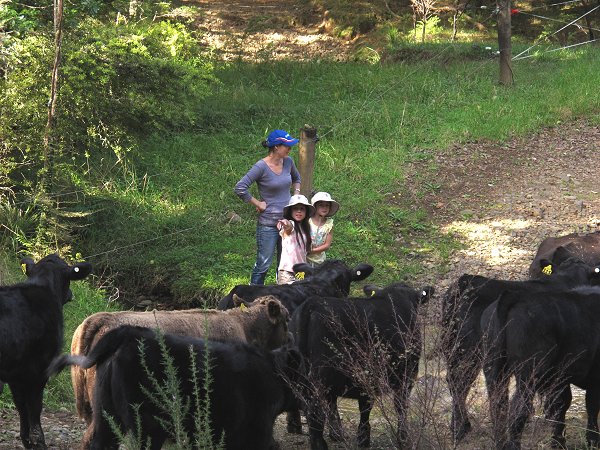 We went out to move the cows and calves just before they had to go home, so the girls could see the animals up close.

I love the colours in this picture.  I'd gone out to shut the cattle into the Big Back, after their earlier move along the lanes. 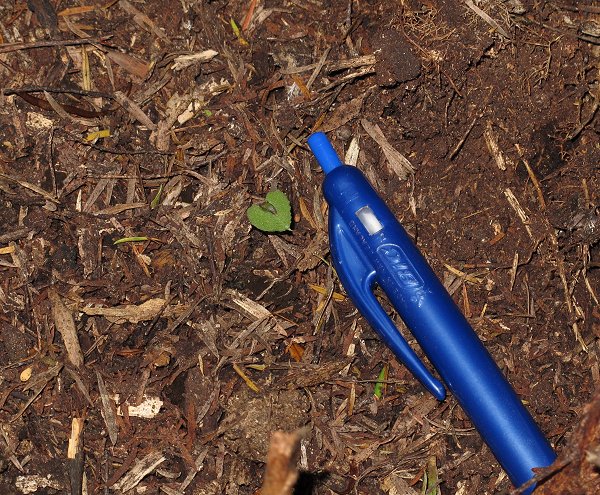 Wandering around in the Bush Flat reserve, I thought I'd climb up the Bush hill to see whether there were any little orchids about.  I found this one.  It is very little.  But the heart-shaped leaf is quite distinctive, and these are the only things which grow as single leaves on the ground, so they're not so hard to spot when you're specifically looking for them. 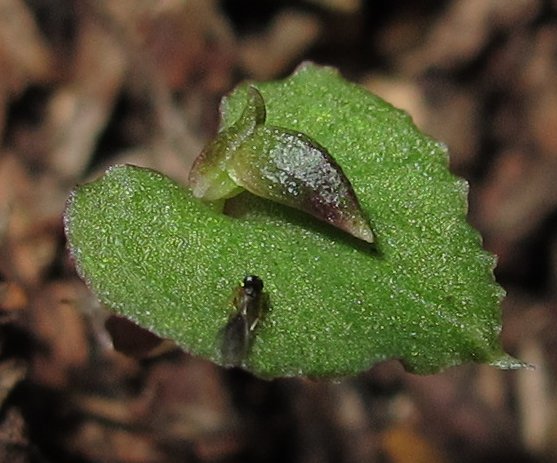 It'll be a little while before it blooms.  I don't know if the presence of that insect is significant; I didn't notice it at the time. 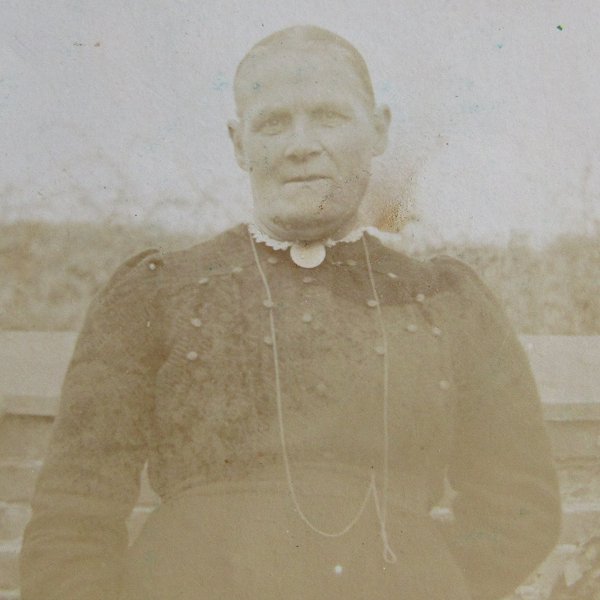 We went to Jill's to do some more pre-move sorting.  This photo fortunately had the name of the subject on the back, and Jill told me she was my Great-great-grandmother, Jill's grandmother's mother, Elizabeth.  The photo was taken in 1904.

Glamourous good looks have obviously always been a family trait. 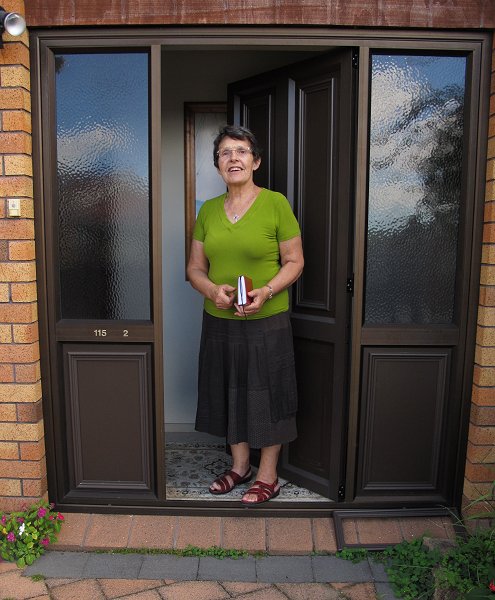 I took a photo of Jill at her front door, since there won't be many more opportunities.  It's been a good little place for her to live, on the edge of a golf-course, with huge Puriri and Totara trees on the other side of her garden fence, a shopping centre and library just a little way along the road and buses running to and from the centre of town on weekdays.

But she won't be able to live on her own for much longer, gradually forgetting how to cook, how to shop, and so on.  It would be a gentle sort of way to fade out of life, I suppose, if one lived closely within an extended family group, where one's needs could be taken care of by the family.  Alzheimer's seems to be taking her back, as if in reverse through the development of a child, as she unlearns the things she used to know.  It's impossible to know how Jill experiences this progression, since she's never been one for sharing her thoughts.  You might surmise that therein lies the major difference and difficulty between us. 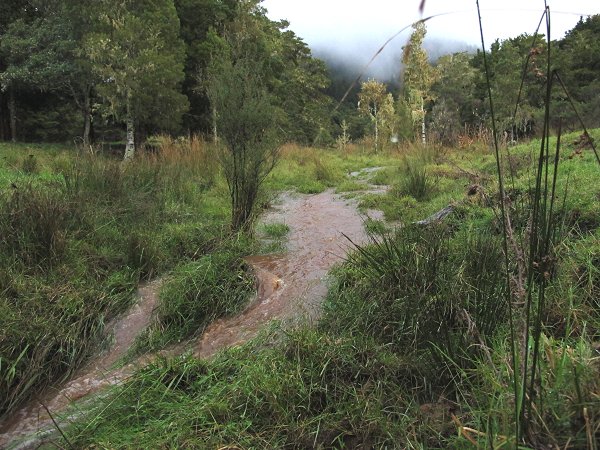 After a drizzly morning, it rained heavily from noon, and while only 25mm fell, it came down fast enough to cause some surface flooding.  This is water running from the wetland area in the Big Back Paddock.  There is a slip in the over-grazed paddock on the neighbour's property, which drains directly into our wetland, and I presume that is the cause of the silt-laden colour of this water. 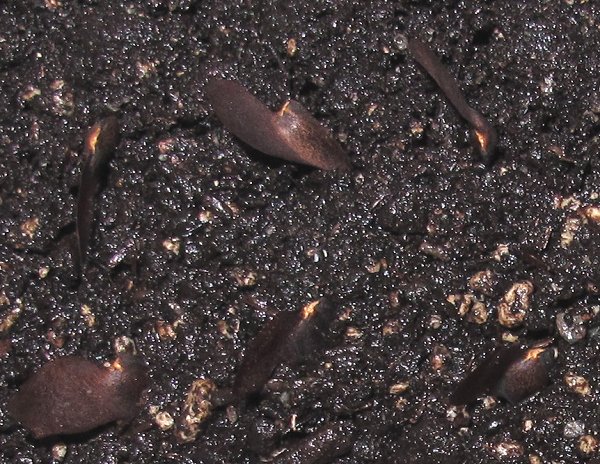 I checked on the Kauri seeds I planted the other day and something about them has changed - perhaps they've swollen a little, cracking the brown casing to reveal a lighter colour within? 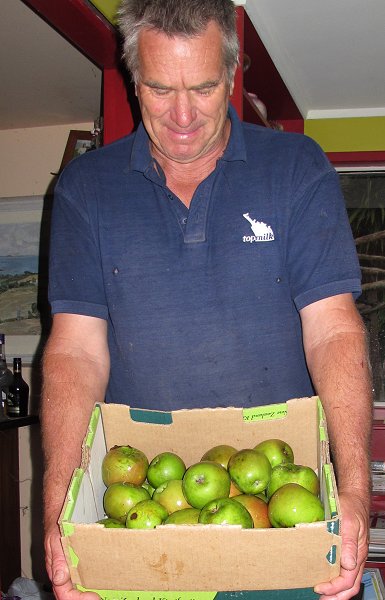 Stephan picked the remaining Granny Smith apples this afternoon and bottled them.  The little three-variety tree has done very well this season. 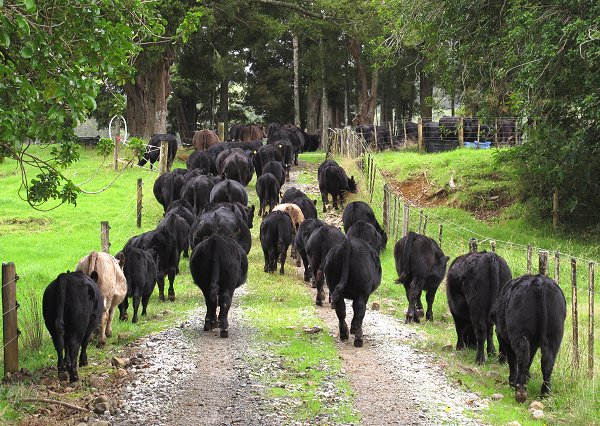 Seventy-six cows, calves and yearlings on their way to the yards.  It is time to begin weaning. 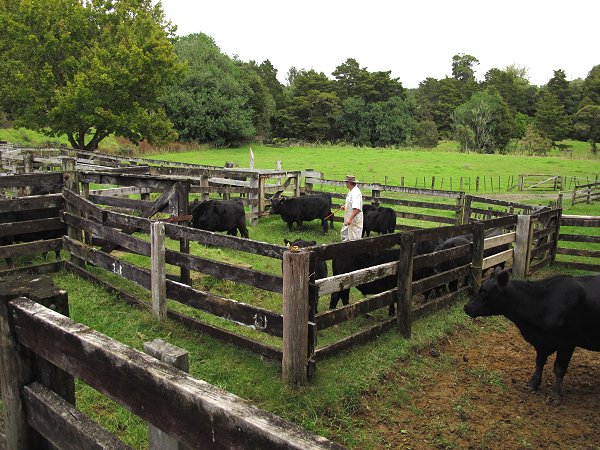 I often do this work on my own, but it's faster with a bit of help from Stephan.  We bring the herd into the grassy yard at the bottom (around the Oak tree beyond where Stephan is standing) and then to the yard at the far right, then invite the cows to come up into the pen on the right, where I quietly draft them out through a small gate to the wider round-about area, leaving all the calves in the pens.  Because the cows are then beyond the crush-pen (at left in the photo) and race, the calves are quite easy to move up from the lower pen.

Working cattle easily and simply is a matter of working out how they would most readily move on their own, and using that inclination to one's advantage.  The calves always want to get to their mothers, so you put the mothers beyond where you want the calves to go.

Having done it the same way for a couple of years, the cows are now really easy to draft out, because they understand that I'll let them through the gate in the top pen if they walk up that way.  It makes work easy during the rest of the year too, because the cows are accustomed to moving smoothly up into the upper pens. 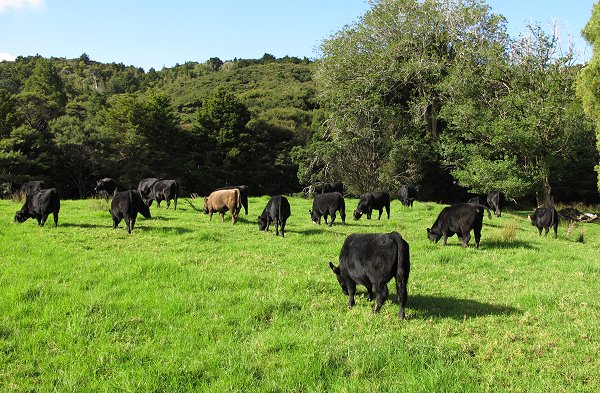 Some of the calves which aren't quite old enough to wean are bigger than those that are.  The cow-calf mob now numbers 43 and they went out to the Frog Paddock. 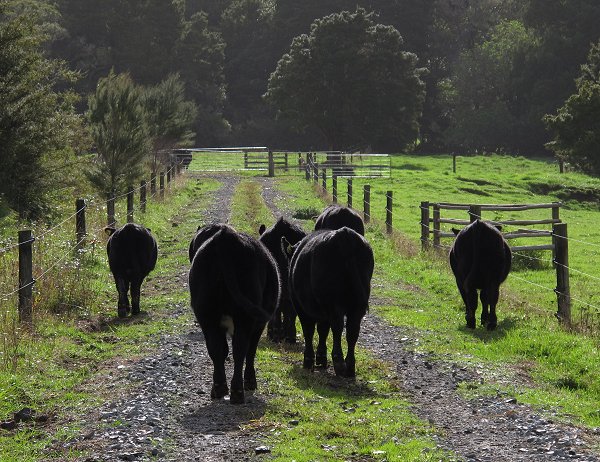 Seven of the weaned calves went to the House paddock and eight to Flat 4, with their respective mothers in adjacent paddocks. 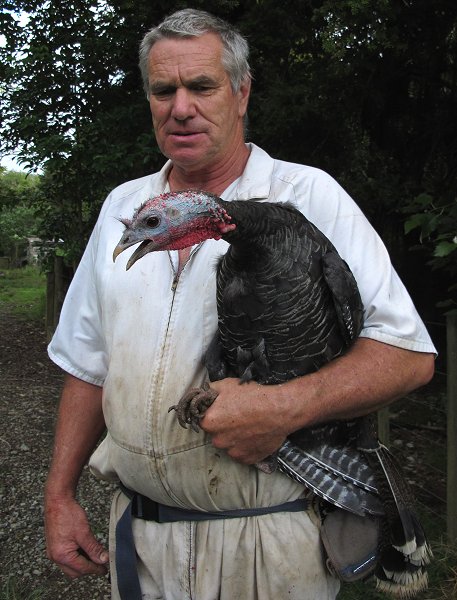 It's the last day for this turkey and her sisters.  Five of them have been living up in the Chickens paddock for years; we don't want to breed them any more and they're noisy birds which need to keep having their wing feathers clipped to stop them coming down to the garden.  We'll eat their breast meat (Hawaiian Turkey casserole is delicious) and the rest will go to bait traps to catch pests in the bush. 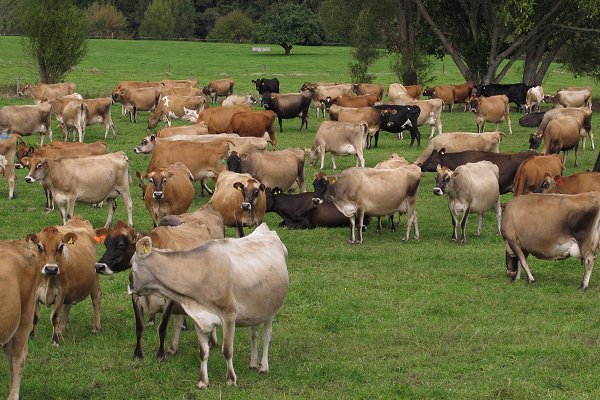 Black Friday?  Bad luck for us only in that the ute went for its Warrant of Fitness check and failed on a couple of things which ought to have been picked up six months ago at least.  More money.  At least we're in a position to afford the repairs.

Stephan drove the ute to town and I went separately in Jill's car, so had time to stop and take this picture down on Takahue Road.  Jersey cows are lovely to look at en masse.  (It would be nice to see as many long tails as there are cows, too!) 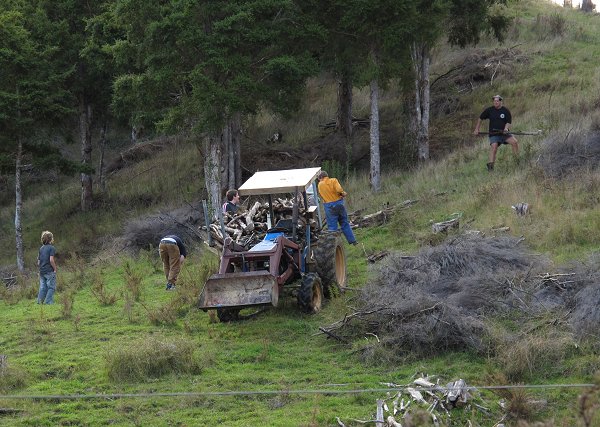 Mike and his four sons (Eric, Stuart and Patrick are our regular visitors, but Mike's eldest son Walter is out from England for a while), came to gather firewood they'd previously help cut.  They're all enjoying the school holidays!