Our guests tried their hand at milking this morning.  Kelly was very gentle with Zella, which is quite understandable in the case of a breast-feeding mother, but it's not how we or their calves milk cows.  Calves are incredibly rough with their mothers' udders and considering that a calf's bunt can do serious damage to a human body when that human doesn't get out of the way, a cow's udder must be a very robust organ.  Added to those violent bunts during feeding is the damage the calves often do to teats with their teeth, so that a number of my cows have long-standing vertical wounds on their teats throughout the latter part of lactation.  The hand of a human, even when milking the cow quite assertively, must be vastly more gentle. 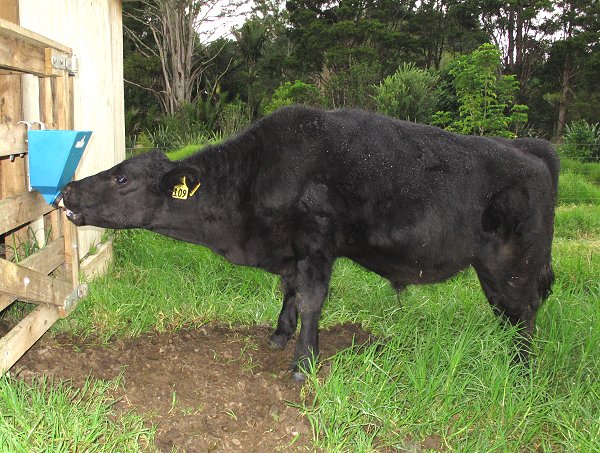 Imagen's son, with his pretend udder.  After they'd gone home, Fran and L-J sent this feeder up for Boy, so I wouldn't have to keep washing his feeding tube every day.  This is a far easier system to clean.

He looks rather odd in this position, standing with his back legs in a hole and reaching down at the front for the teat.

Daylight saving ended this morning, so we're back to being twelve hours ahead of GMT instead of thirteen.  It was easier to wake up this morning, being light earlier, and in the evening we found ourselves sitting down to eat dinner by 7pm instead of eight. 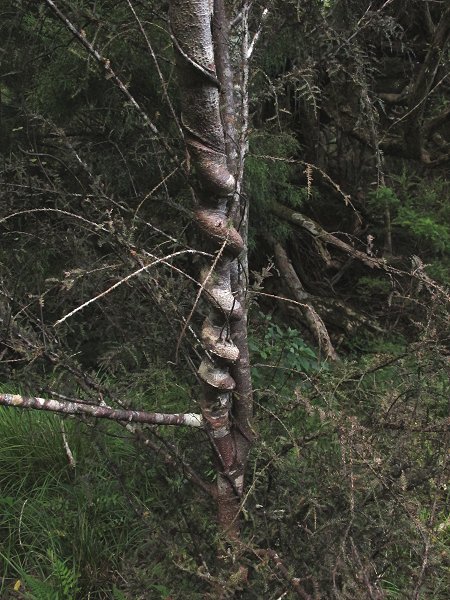 I went out to hunt Ragwort in the Big Back Paddock because I'd seen some flowering plants a couple of weeks ago - I knew they'd probably have seeded in the mean time, but thought I might still do some good.

This tree arrested my attention with its extraordinary form: it's a Kahikatea and their branches don't usually grow around each other, so I had a closer look. 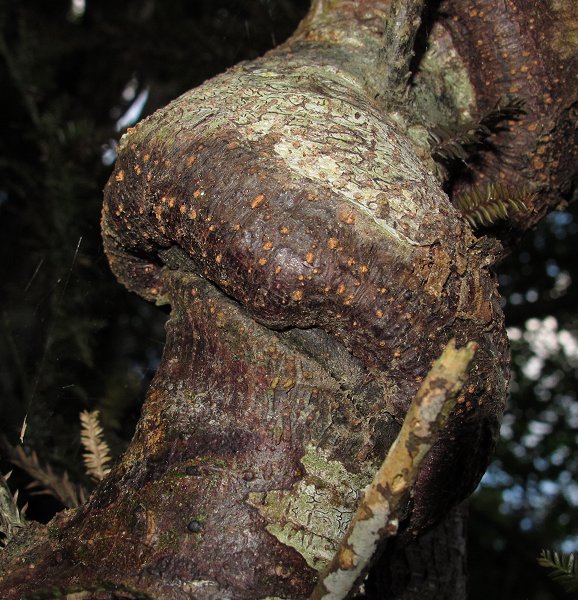 The twist was not caused by two branches entwined, but by a slender climbing plant, probably Muehlenbeckia australis, Pohuehue, which was strong enough to remain intact and restrict the growth of the much larger tree (Kahikatea is the tallest tree in the New Zealand native forest).

Above each restrictive loop, the Kahikatea had bulged over the top of the vine underneath - in the photo below, you can see the beginning of that process. 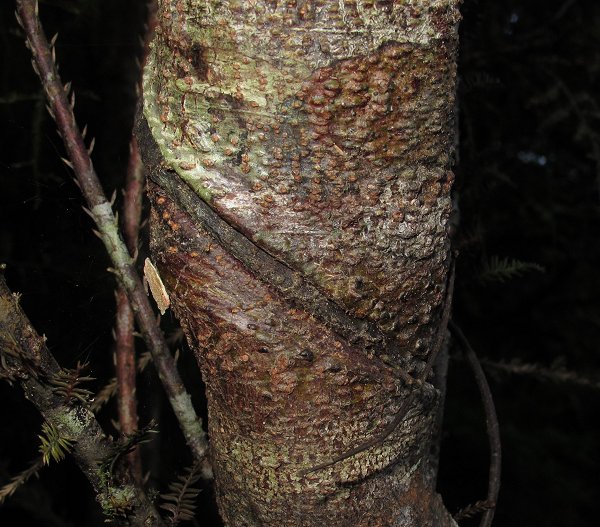 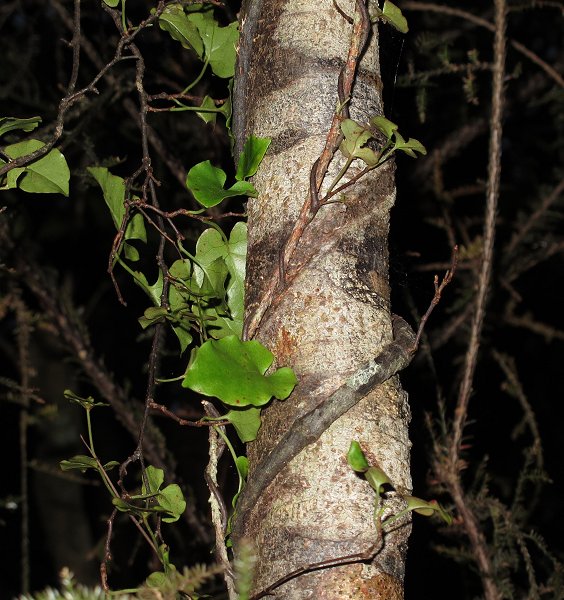 Further up the tree, the vine's leaves are healthy-looking, so it presumably isn't suffering at this stage from what looks likely to become a limiting restriction of its own development from this unusual arrangement.

I will mark this tree for future observation. 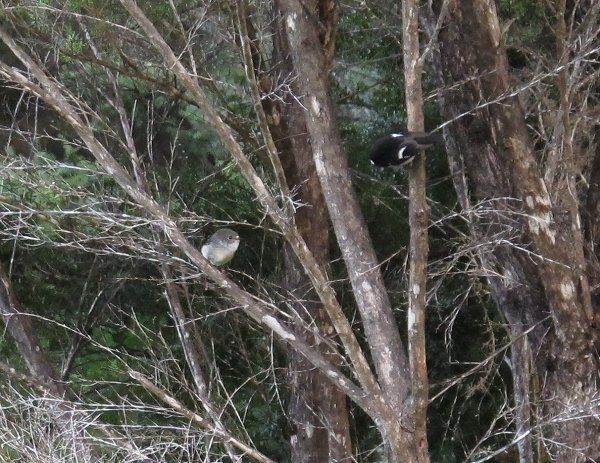 Out in the open where I'd parked my bike, this pair of Tomtits was flitting around in the trees.  I find them very hard to photograph, as they will stay still for just long enough for me to think I'll get a picture of them, then flit off to a further tree.

The 76-head mob of cattle came from the Small Hill to Flat 4, then into Flat 3 and having eaten all the lovely fresh Kikuyu, wanted to move again.  They went next to the Back Barn.

The Kikuyu grows really quickly at this time of the year as long as there's rain and the weather stays warm.  Kikuyu has the best feed value for the cattle when it's young and I achieve the best pasture control if I keep it well grazed, so the cattle get to move around pretty quickly. 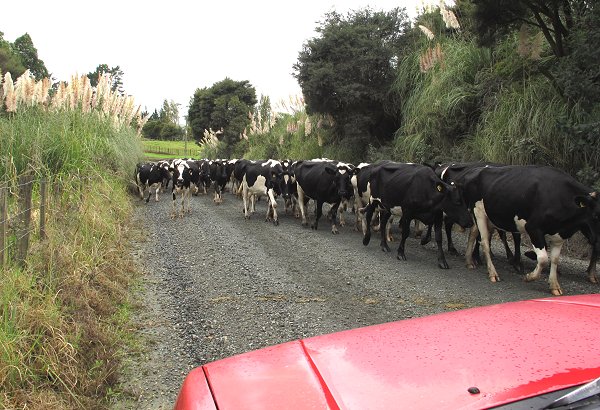 A traffic jam on Ruaroa Road, on our way in to town this morning.  It's tough living out here.

The cows belong to a large dairy farm and were moving to some leased grazing up the road.

You'll note we still drive our red ute, so under the new give-way rules, we have to give way to all green cars.

We went and had a 'flu vaccine each this afternoon.  It doesn't prevent all winter ailments for us, but presumably protects us from the worst of some of them and I'd rather suffer the sore arm for a few days than be knocked over for ten later in the season.

If you happen to read this on the evening of the 3rd of April, you'll know I've finally caught up with myself and the weekly pages are entirely UP TO DATE!... at least until tomorrow...

It rained all day long, and I didn't go out to see the cattle until after 5pm when it cleared a little.  White-faced yearling 660 was notably absent, and I'd not accounted for three of the calves.  I moved the rest though, meaning to leave the gates open for them to find their own way down and a noise made me look up into a gloomy bit of bush across the stream back in the other paddock and there was a white face and a couple of other dark shapes.  By the time the calves reach their current age they've developed a good sense of where things are, so are easy enough to move out of funny corners in directions which take them away from their mothers for a short time to get to an open gate. 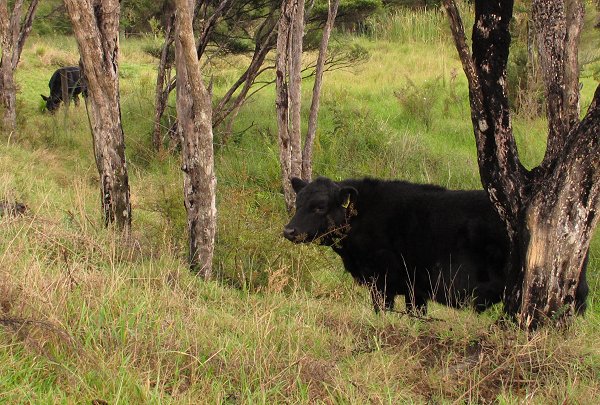 I dashed out early this morning to make sure the one calf whose tag I didn't spot last evening was where he should have been.  I was looking for 681, so when I found 680 (in the foreground) I joked to myself that the next calf must be 681.  It was.

To Whangarei again, on a showery day, to start some serious packing of Jill's household possessions.  My primary recollection of house moving was my move from Auckland, which I tried to achieve in far too short a time-frame.  I suspect that the two days my sisters have allowed for Jill's move are similarly unrealistic unless we do some packing and sorting beforehand.

It being the beginning of the long Easter weekend, as well as the start of the school holidays, we expected the traffic on the way home to be heavier than usual, and it was.  But the nice thing about travelling north is that from about Pakaraka onward (just under half-way home), where Highway 10 peels off to Kerikeri and surrounds, there's often very little traffic at all, because city holidayers go to the pretty places on the coast. 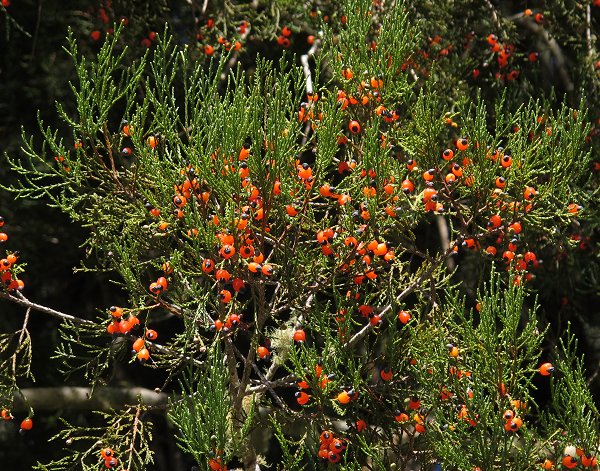 Fine weather at last today.  I spent some of it out with the cows, part of it hanging washing on the line and quite a bit of it resting.  I could do with a holiday!

The berries on the Kahikatea trees this year are bigger than usual, presumably because of all the rain.  It should be a very good season for the birds which feed on them.

Irene had her weekly Viburnum homeopathic spray.  I really hope she carries this year's calf safely.

I've been changing the sizes of the pictures and the width of the pages; what do you think?  Does it work well on your screen?  Please let me know.