Rain again; seems to have been happening a lot lately. 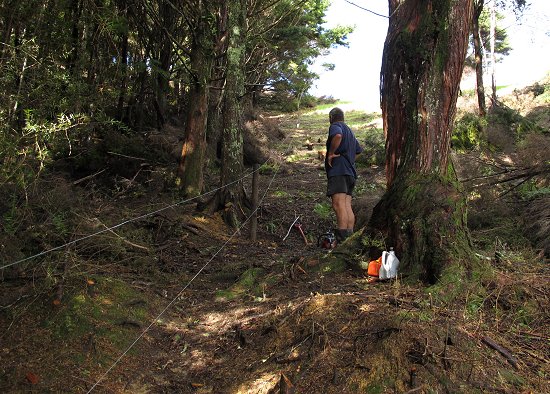 After 60mm of rain the ground conditions were pretty greasy today, but Stephan went up and carried on putting posts in for the new fence over the road.  I went to join him for a while, taking photos of his method of footing a post where the ground dipped, because I'll probably need to write an article to go with it sometime.

Stephan finished the fence over the road, so we put the cows and calves into the paddock.  Curly was on heat, which is another disappointment in the pregnancy stakes.  I saw some slightly suspicious activity near her three weeks ago and this would seem to confirm her non-pregnant status.  What to do with these good cows which aren't in calf?  What will Stella say if I send Curly to the works? 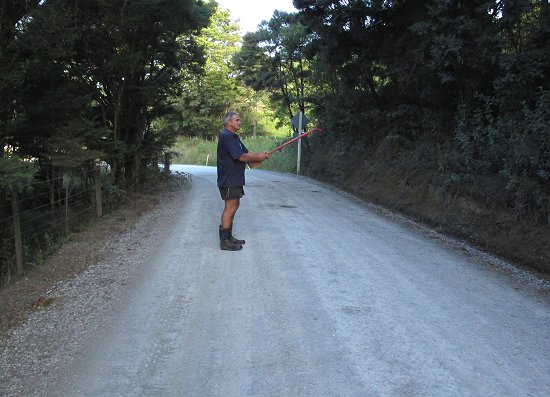 It turns out that we own this bit of road and we think we'd like to install a toll-gate.

The Far North District Council are notoriously uncommunicative, difficult to deal with, a law unto themselves, so when we began negotiating the removal of some of the bank around which the very sharp road corner turns, I asked specifically that they would keep us well informed of progress throughout the job.

Last week a very nice man from the contracting firm came to introduce himself and we walked around over the hillside so he could assess the job to be done, and he said he'd start on Friday last.  On Wednesday I emailed and asked the council for my own copy of the final plan, since I'd only been given a draft before some final alterations had been made, and my contact curtly told me that the plan had been changed!  The contractor knew nothing of such a change...

I'm going to be away for the next three days, so we walked up to take some photos in case things did get sorted out in my absence and I definitely need some "before" shots!

I drove to Whangarei this evening to stay the night.

Off early this morning to join a carload of women to travel down to Port Waikato, south of Auckland, where the mighty Waikato River joins the sea.  Rural Women New Zealand's northern regional conference drew about forty women from around the region, including a number from Doubtless Bay, where there is still an active group, most of whose faces I know from the tea room at the Peria saleyards, and a number of women I met at the RWNZ event I attended in Warkworth last year.

Back in January, on a day when I was feeling distracted and reasonably relaxed, I received a phone call from one of the organisers, who asked if I'd come and take part in a debate: That the Rural Urban Divide is a Myth.  She also urged me to enter the speech competition.  In a rash moment I said yes, of course, to both.
This evening both events took place; first the speech.  The topic for this year is "It Doesn't Make the News", which flummoxed me for weeks, as I tried to work out how to tackle it.  I delivered the speech with my nerves entirely ajangle, knees jiggling about independently behind the podium as I realised that my well-rehearsed familiarity with the words had deserted me upon standing to deliver them.  I can stand up in front of any crowd and speak without much nervous reaction at all, but the delivery of what is essentially a performance piece is an entirely different matter.  It's also quite different from play acting, where one interacts only with the actors with whom one has rehearsed the piece, rather than the audience.  If I ever do it again, I will do more rehearsal, at least in my mind, of the interaction with the audience as the other party in the performance.  At time of writing I have still to hear any formal feedback from the judge on the night.  I was unfortunately the only entrant in the competition and have been urged to go to the National Conference to represent the region there, but have declined - the dates are too close to a certain birthday party I must organise!

The debate took place immediately after the speech and I was third speaker for the Affirmative team, arguing something I entirely disagree with: of course there's a huge rural-urban divide; that's one of the reasons for this website, to attempt to bridge it a little.  City living is an entirely different experience from living in a green and sparsely populated area in so many ways, from the speed of everything (traffic, getting things done, internet, post ...) to people's relationships with their surroundings.  However we had some fun arguing the toss and eventually the affirmative team was judged the winner.

My two house-mates and I went for a stroll out of the conference area to the banks of the Waikato River this evening and the light was glorious.

I took this picture looking upstream over the wide Waikato River. 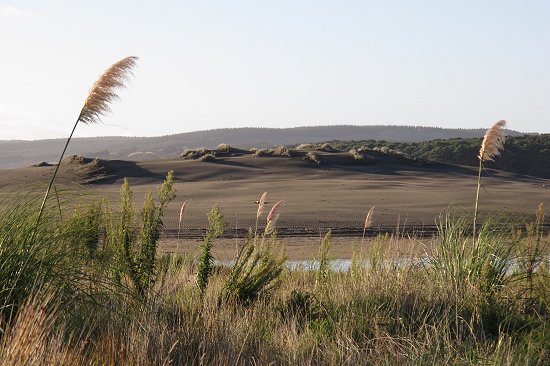 The river flows behind this sand-dune and then out to the sea.  I loved the colours and it looked like a photograph would actually capture them.

I suggested to some of our hosts that they lead a convoy of cars full of conference women down to the beach after dinner, so we could watch the sun go down over the sea.  We only just made it as it sunk beyond the horizon - and the clouds, which meant it wasn't quite as spectacular as it might have been.

But again the colours were stunning.  The dunes have been replanted with a native grass (whose name I didn't write down) and the greeny hue along the beach was magical.  The river meets the sea in the distance at the left of the picture.

The conference finished with lunch and we all got back into our cars and set off for home.  Back in Whangarei by 5.30ish, I carried on home without a break.  I passed Jill's house with it's "SOLD" sticker over the sale sign. 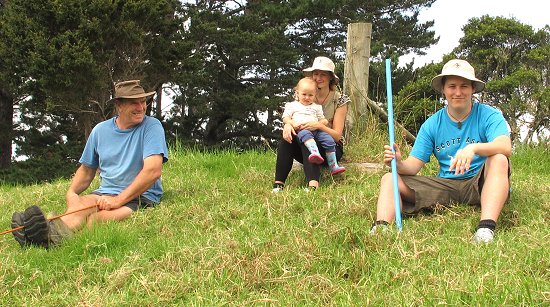 Stephan's sister Rachel's son David, Kelly and little Penny came out to visit and stay the night, so we had a lovely relaxed time with them.  It is years since they were last here!

Before climbing the hill we let the cattle gathered at the gate go across the road to the yards, and went off to find the rest of them during our walk. 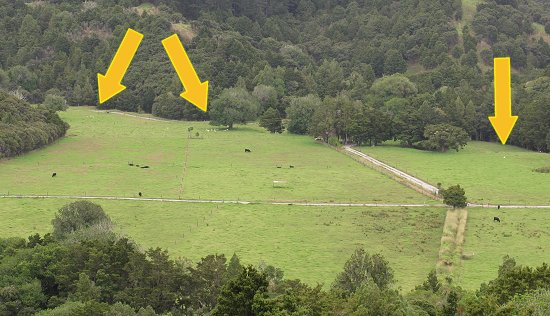 Down on the flats I tried to work out what was going on with the sheep!  The right arrow points to Yvette, who has remained alone, again, in the Windmill Paddock.  Most of the mob were sitting under the Puriri in Mushroom 1 (middle arrow) and a ewe and a couple of lambs were in Mushroom 2 with bull #90.  Those animals are out of control. 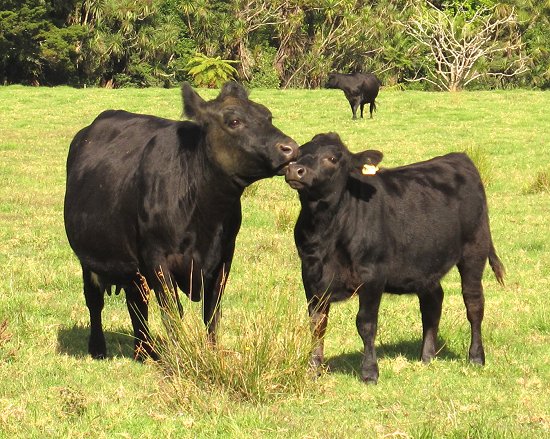 I led the cows and calves out to the Small Hill paddock and on the way saw Imagen and her grand-daughter having an affectionate moment.  Zella, the calf's mother, is in the background.

The calf, Boeing (707) now weighs 260kg, and could be weaned any time, as long as Stephan's prepared for twice-a-day milking for a while.  I think he's keen to have the extra milk for the pigs, rather than feeding this calf to obesity. 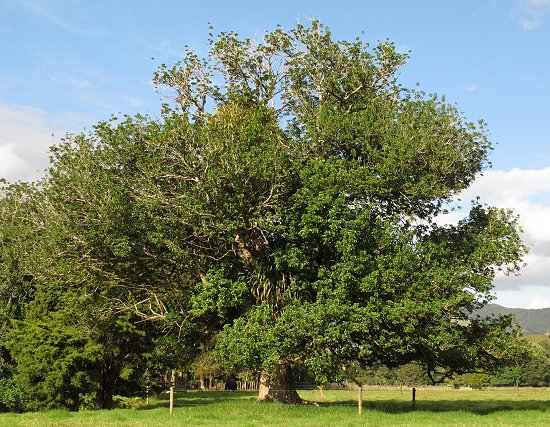 This is the Puriri in Mushroom 1.  We fenced it off a number of years ago and I think it's looking far better than it used to.  There's an early picture of it on one of the Trees pages.