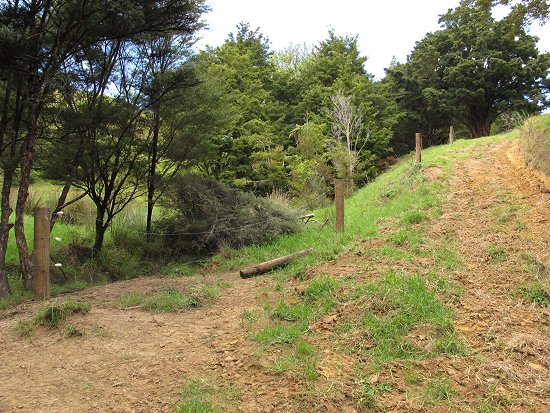 Stephan is getting on well with the fence over the road, thumping as many posts in as he could with the tractor, then doing the rest by hand.

In some places we have to sacrifice bits of grazing area for fencing ease; for instance it would involve much more work to take the fence along the bottom this piece of green bank and then back up the slope, for the sake of a few square metres of grass. 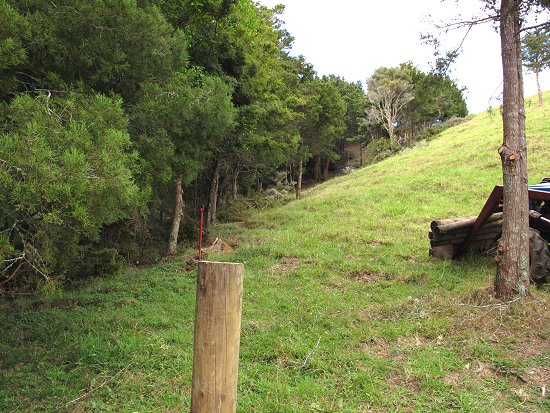 This photo taken from just above the split Puriri tree. 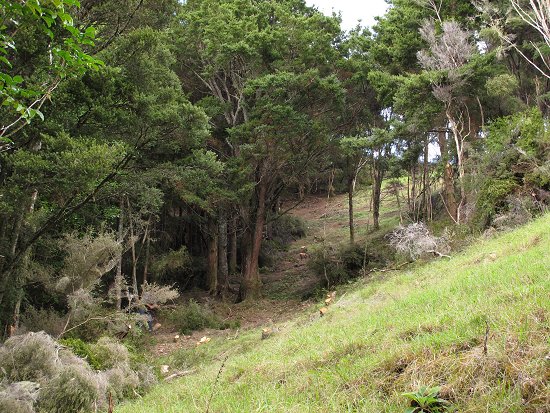 This one from further up the hill again. 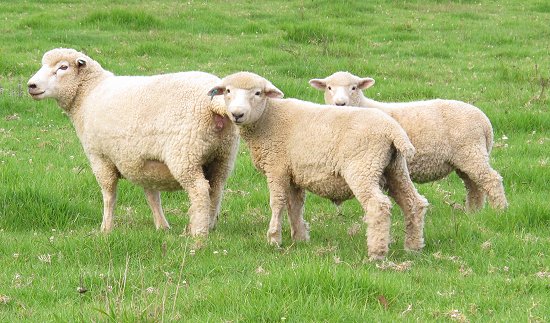 Little sick sheep is continuing to look better.  It's a bit hard to tell because his wool is growing as much as he's regaining condition. 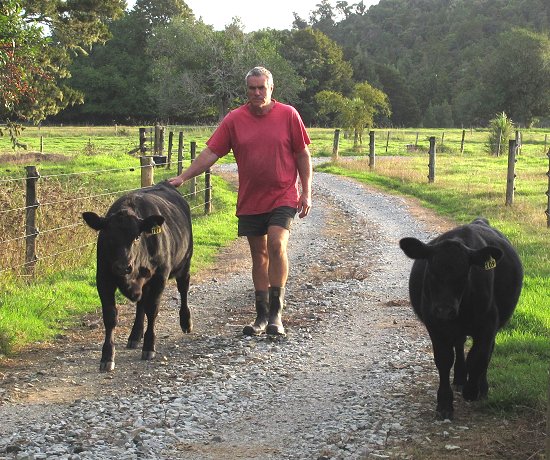 Every evening Stephan goes out to wherever the house cows are grazing and wanders back with the two calves.  They're very good at coming out of the paddock, although Boeing (707, Zella's daughter) does have a habit of trying it on and attempts to double back to her mothers at some stage.  If you let her know she can't win, she generally behaves pretty well.

Imagen's son, 109, still has a couple of litres of milk every morning, but has just finished the third bag of Moozlee, and that'll have to do him.  He doesn't look too bad, and should grow out alright, since we've kept him well enough resourced so that he will live a healthy life.

Every now and then I change the picture on the front page of this site.  You may not have noticed that the home and index page pictures have been slightly different from each other since 2007.  You can see all the title page photos together here.

This is my latest choice, taken as the cows and calves spread out across Flat 4 today.

The only photos I took today were of the inside of the old computer, as L-J and I tried to figure out why something which did work with that machine, doesn't work with the new one.

There were severe weather warnings out for today, predicting much rain, particularly around the east coast of Northland.  By mid afternoon, many major roads around Northland were impassable, although here we'd not had a great deal of rainfall.

We had a total of 140mm or rain and while the main river came up over the bridge, we didn't have to move the chickens and it was just an ordinary sort of event for us. 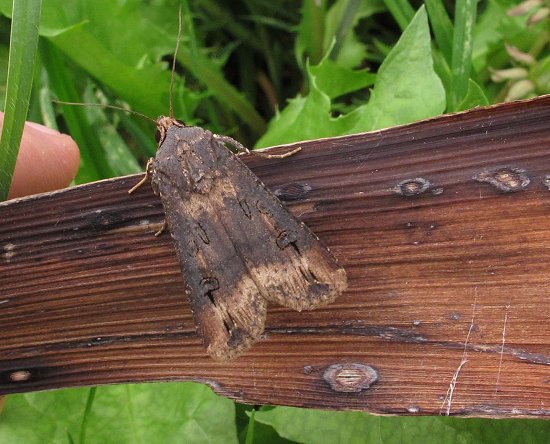 I don't know what sort of moth this is, but it would take little to convince me it spends much of its time amongst dead Cabbage Tree leaves, like the one upon which I found it today. 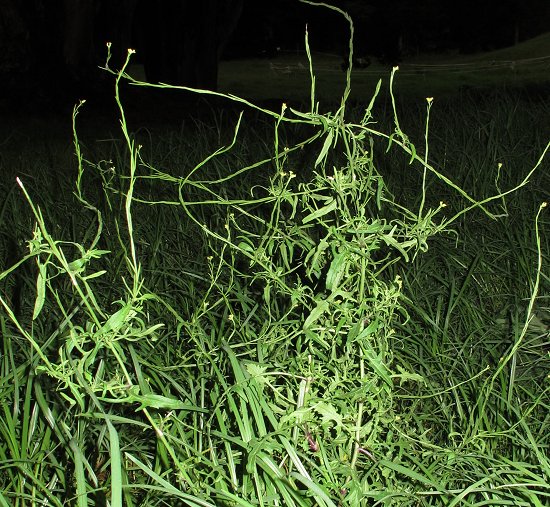 Hedge Mustard.  I hadn't checked the area under the trees at the top of the Windmill Paddock for a while, but today when walking through, remembered to have a look for these plants.  This one has still some flowers, but also many seed pods along the wiry flower stems.  I carried it home and put it in the fire. 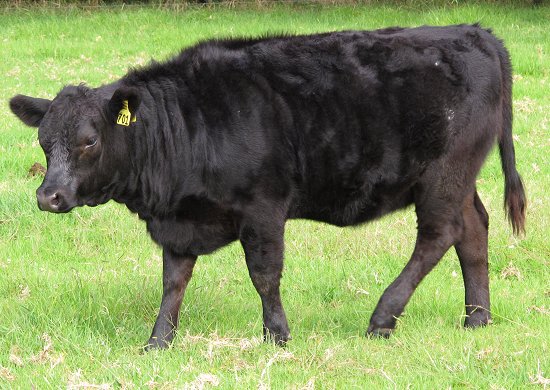 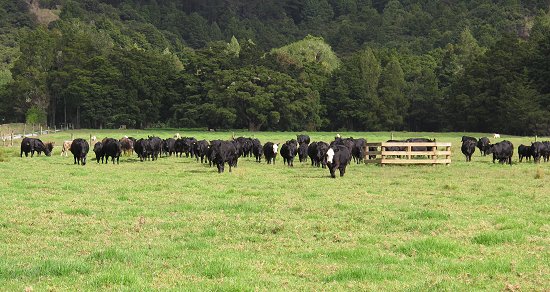 Stephan went off to work today, for the second day in a row - he and Terry usually don't work consecutive days because it's such hard slog walking miles over tricky terrain.  I decided to weigh the calves, even though I didn't much feel like doing the job on my own.

The cows took a bit of convincing that they should come down to the gate where I stood calling them, but eventually there was movement and they all followed me out to the yards.

They all behaved very nicely, as is usually the case by this age.  We put some patient effort into making sure they're not frightened in the yards early on and around now it really begins to pay off.

My one "event" for the day occurred as I was trying to get yearling 657 up the race on her own and she lashed out with a rear leg and I have a large bruise on my thigh!  My subsequent exchange with her was neither quiet nor polite.

The calves have slowed down a bit in growth, which probably reflects my having held them back a bit as they've grazed across the flats.  The heifers have grown at an average 991g/day, which is very low for my herd - usually they're at least 1.1kg/day; the steers did 1.1kg.  Their overall growth per day figures are 1.15kg and 1.27kg respectively. 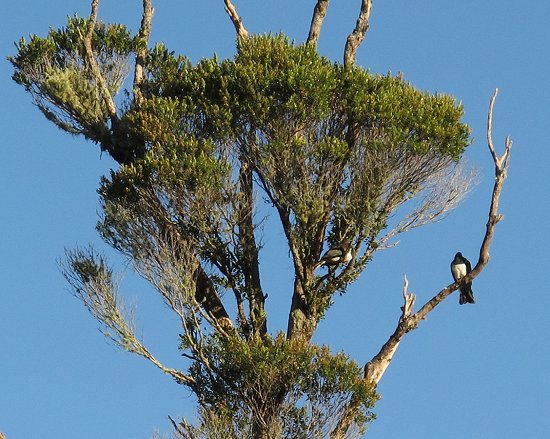 Two Kukupa in a Northern Rata tree-top.  This is one of the stand-alone Rata in the Bush Flat reserve.  I didn't realise there were two birds in the tree until I processed the picture!

Northern Rata begins its life as a tiny epiphyte, which eventually encases its host tree and if it's solid enough by the time the host dies (presumably from the competition for light above and resources at root-level) it remains standing on its own.

I've only seen the Rata on the farm flower once, in 2007.  I hope it'll happen again soon! 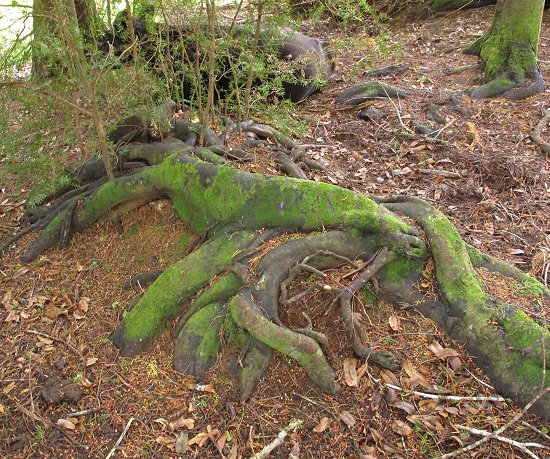 Kahikatea roots are amazing.  They take this formation all around this stand of trees, which is between the stream and a swampy wet area.  They appear unaffected by the cattle.