Before coming home from Auckland yesterday, Stephan and I dropped in to Jude and Roger's place to see the children and wait for the traffic rush-hour over the harbour bridge to pass.

When Stella and the boys visited the farm two weeks ago, Stella arrived with a small dictionary she'd been reading in the car on the way up and delightedly discovered my great heavy Collins English Dictionary, which she took to bed with her, along with my Roget's Thesaurus.  There aren't too many children who prefer such reading material and it really tickles me that Stella does.

Between the funeral and going to visit them yesterday, I found a bookshop and bought a combination dictionary/thesaurus which was not overly expensive and looked easy to use, wrapped it and gave it to Stella when we arrived at their house.  When she opened it she bounced around squealing with delight for several minutes, telling me it was the best present she'd ever had!  I suspect her of some theatrical exaggeration, but I believe she's quite genuine in much of that delight.

Stella writes very imaginative stories in terrible grammar (although when she reads them she verbally punctuates very well) and her spelling is pretty dodgy.  But ever since we entered her Swan story into a competition a few years ago, as a result of which she won a serious sort of monetary prize, she's been writing and getting better and better at it. 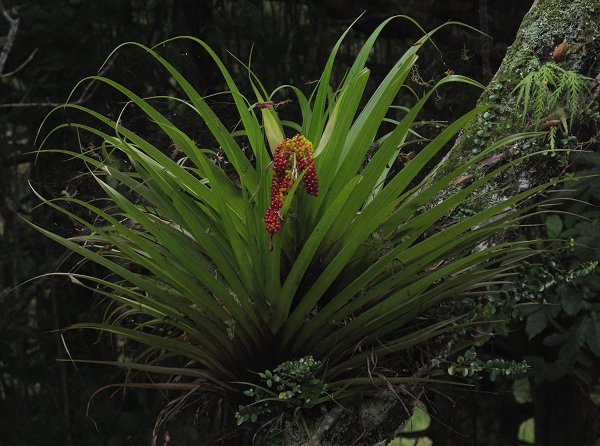 Fruiting time for the epiphytes which flower over the summer.  There are some gorgeous colours around at this time of year if you look out for them. 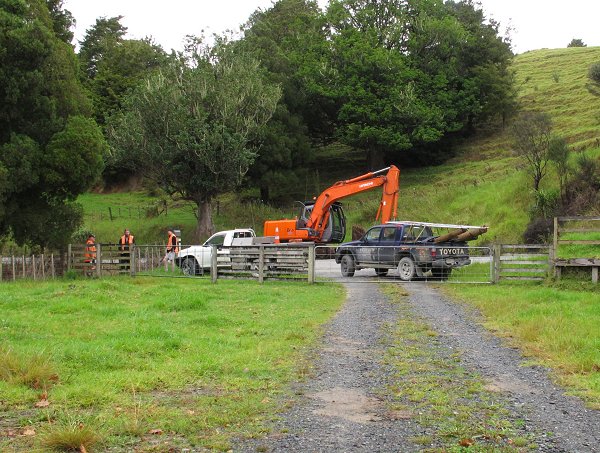 We have, for several months now, been in discussion with the Far North District Council about plans to realign the sharp corner out by the original farm house.  We've been reasonably willing to proceed, and the council representatives have been surprisingly pleasant to deal with, but their process has been extremely slow.  They've changed their plans and delayed the start and messed about, but today, at last, the workers and machinery are here to begin.

We signed forms and went up the road to finalise how they're going to use our Road Flat paddock for dumping all the "fill" which will come off the corner - there was no requirement for us to provide somewhere for the soil to go, but as I won't be using that paddock for some time due to the recent incursion of a neighbour's stock, I figured they may as well even out some of the ground levels there. 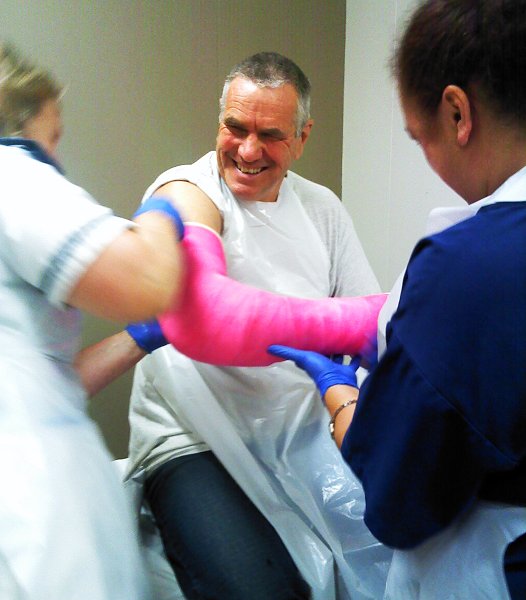 While the work began we drove to town twice.  The second appointment was in the late afternoon at the Fracture Clinic at Kaitaia Hospital, where the doctor recommended that Stephan's arm be immobilised in a fibreglass cast for the next three weeks.  He fell over in the bush over at Whakaangi one day about a month ago and while his arm was bruised and sore for a while, it didn't seem too serious.  After it became swollen and sore ten days ago I sent him off to the doctor last Monday and he was x-rayed last Thursday.  Telling Stephan to stop using a limb doesn't work; you have to make it impossible for him to use it.

Why a pink cast, some have asked?  Why not?  Pink is only a colour.  But Stephan also likes to challenge people's assumptions.  We have no idea how much confusion this might add to some people's view of us, bearing in mind he does the cooking, I make the primary farming decisions, we both wear trousers ...  It must be really challenging for some, when people don't fit into the roles they believe people should.

The first trip to town, in the morning, was to attend the NAIT Roadshow meeting, the first one held in the series which will run from here to Invercargill (at the bottom of the South Island).  NAIT (National Animal Identification and Traceability) will come into effect on 1 July, and this is the big educational push to get everyone up to speed on their responsibilities in conforming to the new tagging requirements.

It was interesting to see how people are feeling about the introduction of the scheme.  There's a lot of misinformation and misunderstanding about why the scheme is being introduced, and how it will work.  There's also a lot of concern about whether it will really work, particularly if people don't voluntarily comply with its requirements. 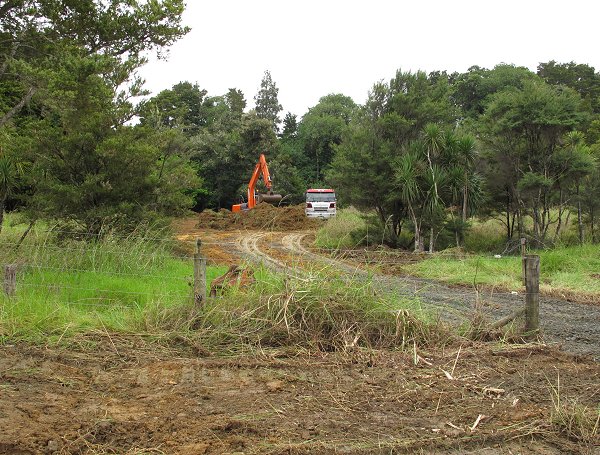 When we came home between our two visits to town, we drove up the road to see what had happened there.  The digger had scraped all the topsoil and grass off the top of the paddock and piled it up with the help of the truck, around the edges of the area to be used to dump the earth from the corner.  When they're finished, the dumped soil will be levelled and compacted and then the topsoil will be pulled back over the top.  Much of the grass is Kikuyu, which will simply start growing again as soon as it's spread out in the light. 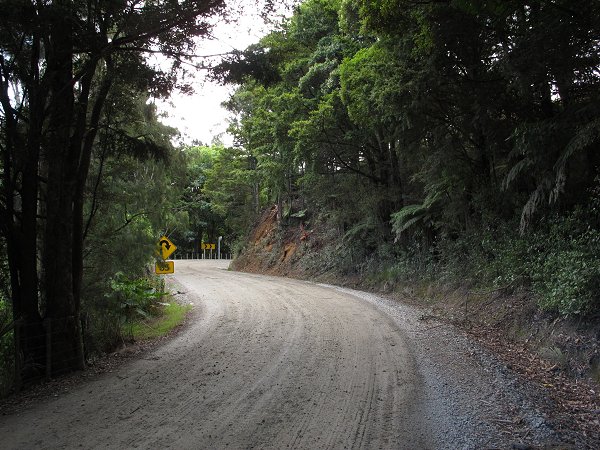 The corner still looks much the same from this vantage point. 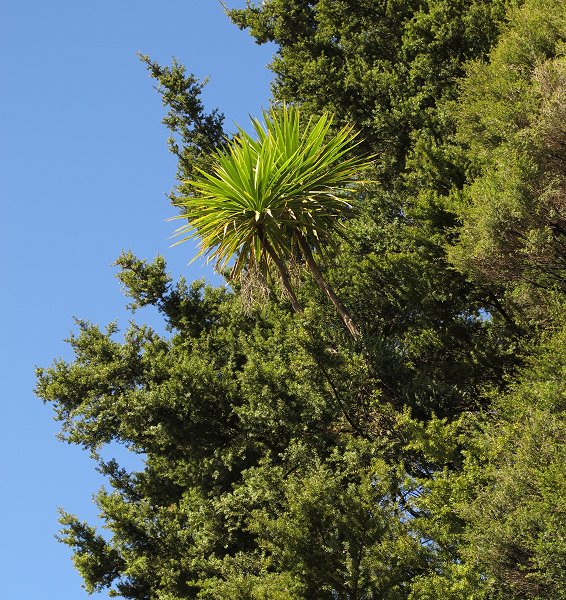 Some very large Totara will be felled, along with a number of Towai and these Cabbage Trees.  I like Cabbage trees and it is sad to see them wilfully killed. 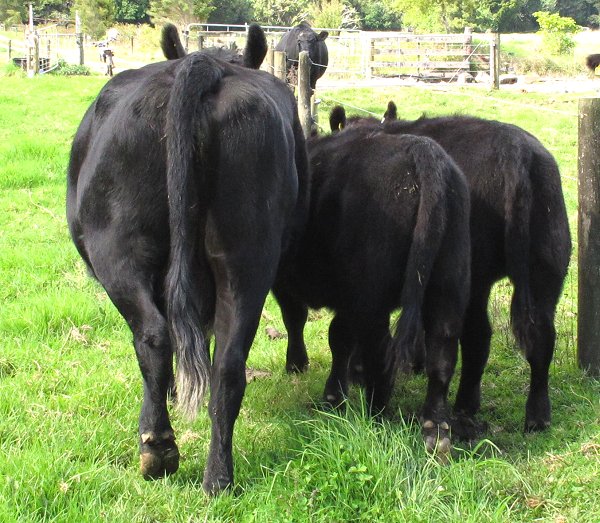 This morning I separated the ten heifers and their mothers.  This afternoon I took Squiggles and her calf, and the twins and 545 (pictured) to the yards to be weighed, and then separated them from each other as well.

Some of the ten heifers are fabulous: the heaviest of them weighing over 280kg.  The twins weighed 234 and 240kg, so their mother weaned a total of 474kg, which equates to around 75% of her own weight, compared with a usual 46% for a heifer calf in this herd.

545 isn't the most beautiful cow, but she does a good job, gets in calf early in the season every year and last year I very nearly kept her daughter.  When I saw that daughter a few weeks ago she looked lovely, so the twins will probably turn into quite respectable adults. 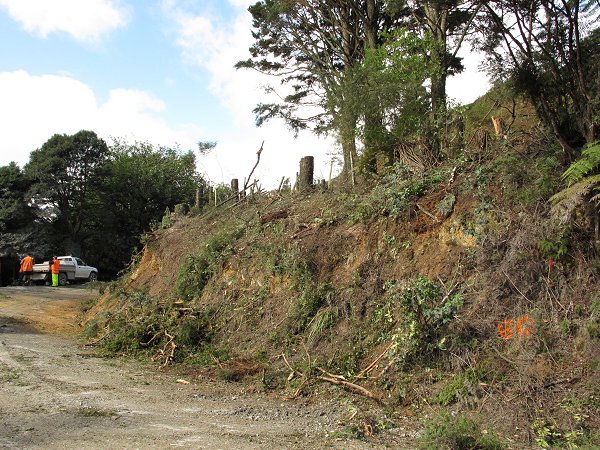 I feel quite sad about so many trees having to be cut down.  The people who live in the house on the other side of the road are happy, because they will get so much more sunshine than they did in the shade of all the trees on that corner. 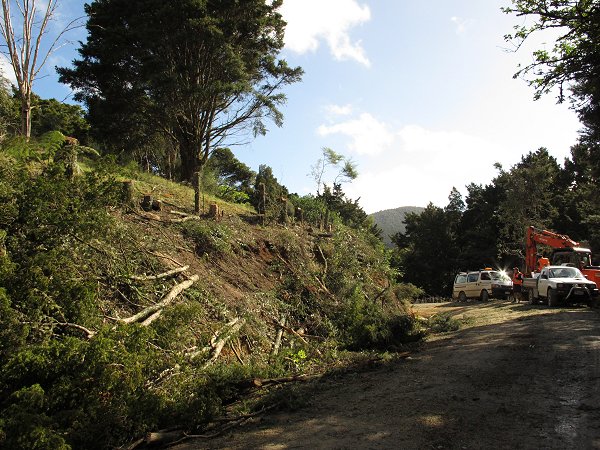 Further around the corner, looking back from the other direction. 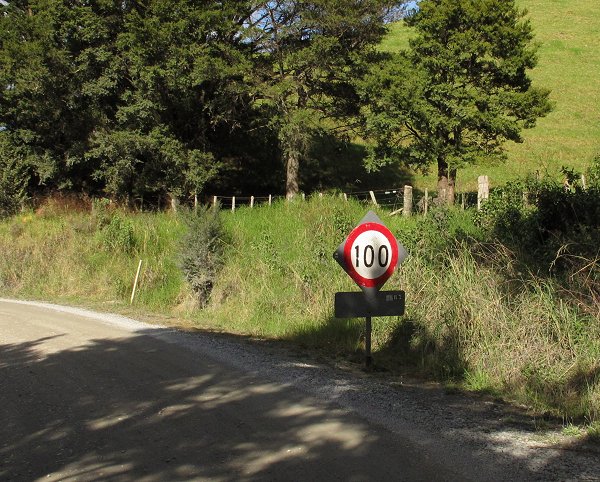 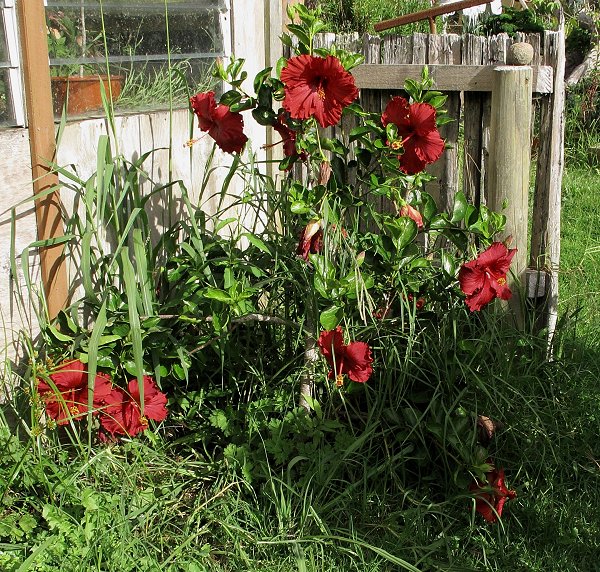 I can't remember whether or not Hibiscus are supposed to be blooming at this time of year.  This little tree goes through periods of looking like it might be dying, then comes back in fine form again.
My sister, Rachel, gave it to me years ago and while I've managed to grow a few cuttings from it, this original tree has remained quite small. 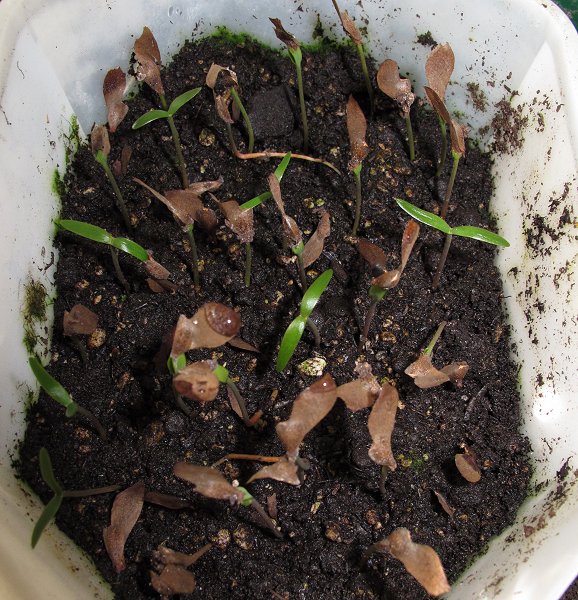 I thought the seed cone may have been too immature, but this would indicate the seeds were well ready to go.

Most of the seedlings I grew last year from a similar cone have survived too.  Some of the young plants I've grown at other times have not been very robust. 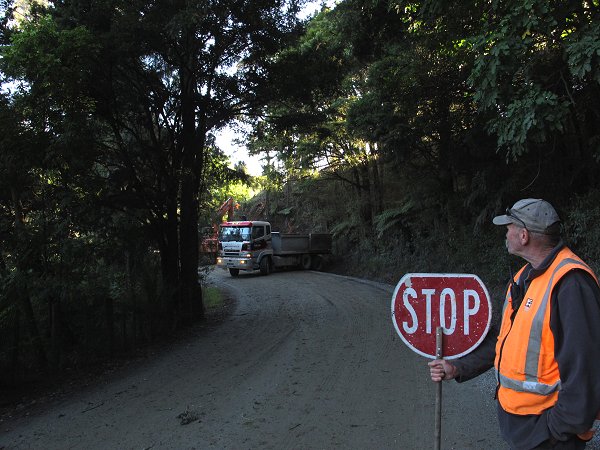 Traffic movements are only occasionally exciting enough to provide anything for this guy and his mate at the other end to do.  The logging trucks are still going up and down the road and there's the odd car or ute, but not much else. 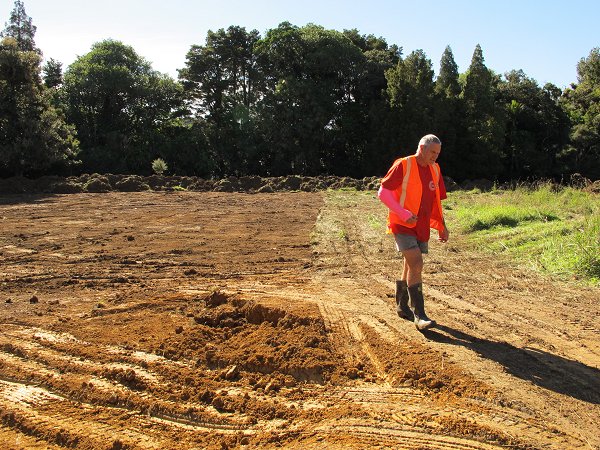 Our Road Flat paddock looks rather different from its old self. 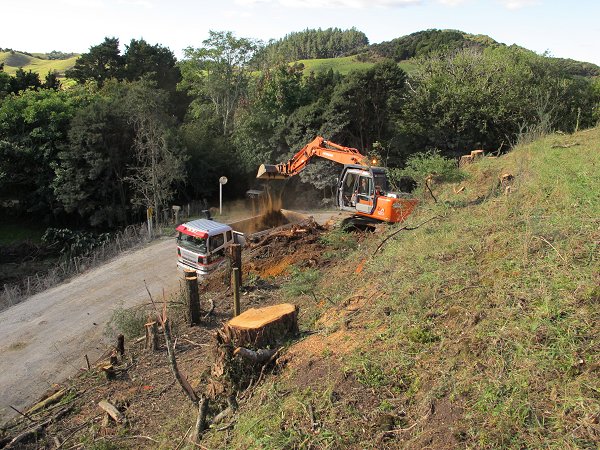 After all the trees had been felled, work began on digging away the bank. 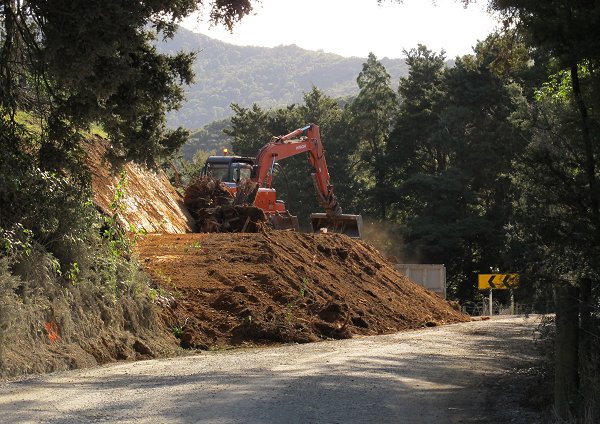 I'm not now sure how many benches they're now intending to make down the slope, the plans have been changed so much. 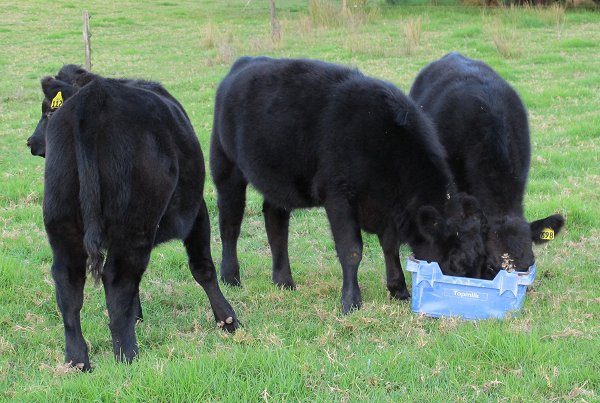 I've started feeding the twins some Mooslee each day, to quieten them down a bit - they're strangely jumpy when I'm near.  Their mother is very quiet and so was last year's calf, so perhaps they just set each other off all the time by reacting to anything new. 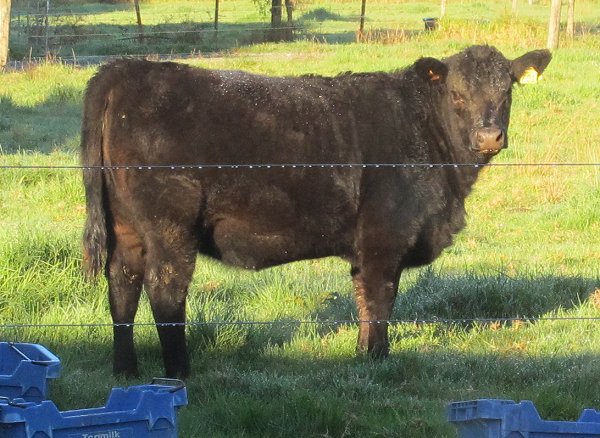 701, daughter of white-faced 517 and bull #89, now just over seven months old.  (The blotchy nature of the photo is due to the disgusting state of the window through which I took the picture.)  She's a lovely looking animal and I'm very pleased she is, because I want a daughter from her mother and last year's calf was a disaster from a replacement heifer perspective!  I very nearly sent her mother to the works, but I am now glad I didn't. 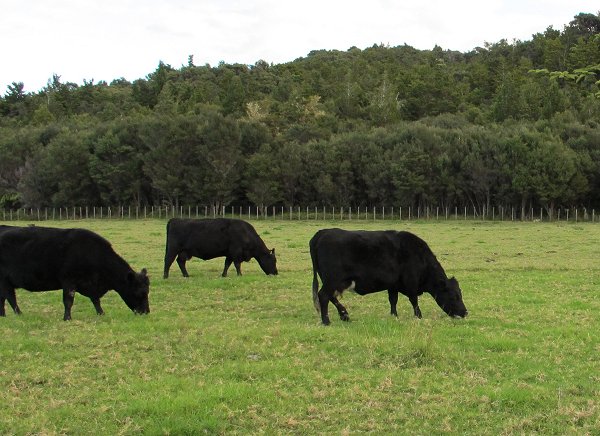 This afternoon I sowed my third paddock of Italian rye grass seed, then let the cows in to graze down the grass.  I'm quite late this year after a few false starts.  When I bought seed, we discovered it was from 2010, so I sent it back.  We brought home some treated seed as a stop-gap so I could get started with the sowing, but as I was preparing to go out with it, I noticed the various warnings on the first bag, which included a withholding period for grazing animals and further reading via the internet discovered warnings about handling and inhaling dust from the treated seed, so that lot went back to the shop as well.

Having bought 250 kg of seed, I considered the idea of getting someone to come with a quad bike and spreader to put it on the paddocks for me, but wanting to use the cows to tread it in and chew the grass down, means I can only do one paddock at a time, so hand-sowing is my best option still.

The paddock beyond the cows is the one they were previously in.  I sow the seed, which falls through the grass to ground level (mostly) then the cows come in and they chew down the grass cover so the germinating seed has light to grow, then the paddock is shut up for at least six weeks as the new plants get established.

This evening Dan and Nathan, who've been to cut and collect firewood for themselves on several occasions, kindly came to cut some up for us, since the firewood cutter of this household is unable to do it at present.