The week beginning the 4th of February 2012.
Saturday the 4th 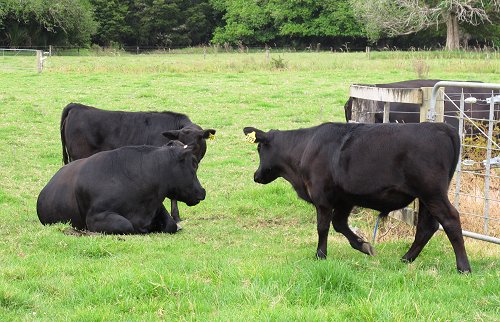 #96 bull is still with the house cows, only because I haven't decided where next to put him.  He seems to be behaving himself now and often stays in the paddock when the cows come out in the morning (the calves spend their nights in a separate area altogether) and this morning he was sitting by the gate when the cows and calves came back and didn't bother to get up.

The calf in the foreground is Imagen's abandoned son, a much lesser calf than his brother last year!  He can't drink much milk in one feed (his belly gets round and blown-up and he looks like he'll burst) and because we can't practically provide him with little servings of milk all day, we've been feeding him a commercial calf rearing product called Mooslee, which smells lovely and which he's learnt to like a lot.  He's been growing at just over a kilogram a day since we started supplementing him with that.  This is not a commercially sensible decision, i.e. people who rear calves only to make money would not be feeding such an animal at this age and this expense, but I feel that it is my responsibility to give this creature the best start I can under the circumstances and that means adequately resourcing him to build a healthy body and immune system.  It's not his fault his mother abandoned him. 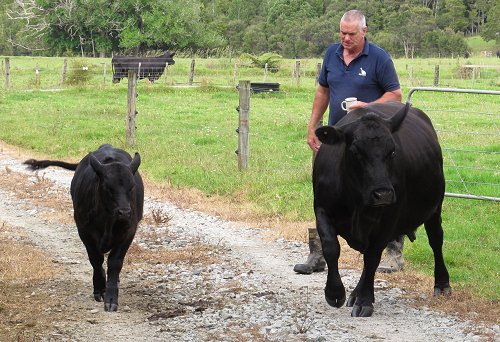 Athena is not happy about being kept on her own away from the rest of the herd, but her son needs Penicillin today and tomorrow before they can go back to the mob.  I put them on the river bank where there's grass, a trough and shade and I can keep an eye on the calf during the day.  He looked pretty miserable yesterday, but today he's perked up quite a bit. 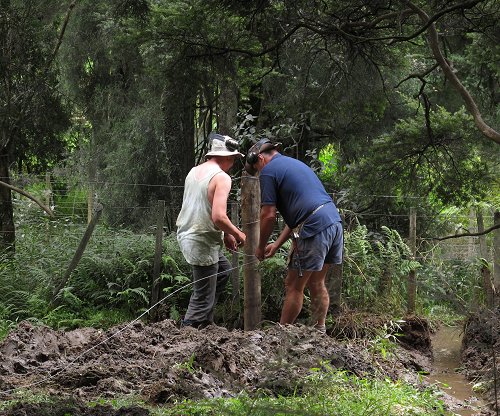 Mike said he'd like to come and do some fencing with Stephan, before he starts running an agricultural module with some of his school students.  Fortunately we had just the job: close to home, needing to be done, and small, so that the whole process of a strain of electric fencing could be demonstrated.

This is the roadside boundary of the paddock over the road, where one of the main gully's water exits the paddock.  Back behind where I was standing taking the picture, is an area I've kept fenced off for the last couple of years, to exclude the cattle from a dangerous hole the water has formed as it comes down through the hard soil and tree roots.  Two years ago Stephan put a culvert in to enable better and safer access across the gully for the cattle, and this is the next phase of the project which will eventually see the whole gully fenced off and the paddock thereby subdivided. 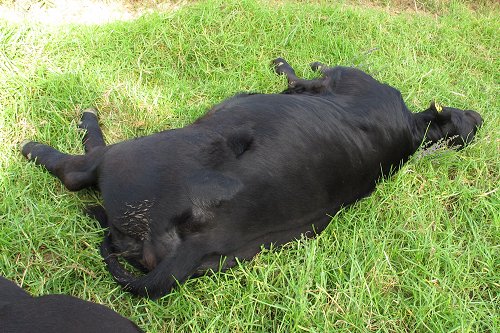 If it were safe and she'd let me, I'd like to have cuddled this fat and lovely calf.  710 again.  It won't be too long before this position won't be comfortable any more.  When she's a mature ruminant and no longer obtaining part of her nutrition from milk, her rumen will be too full and producing too much gas for her to lie out like this for long.  Cattle need to be upright to belch their rumen gases - all that tosh about cattle farting and warming the atmosphere with Methane is annoying, since they don't fart it, they burp it!  If a cow lies prone like this for too long, the rumen gases start causing it to put too much pressure on her diaphragm, making it hard to breathe.  If a cow can't stay upright because of illness or injury and is left like this, she will eventually suffocate. 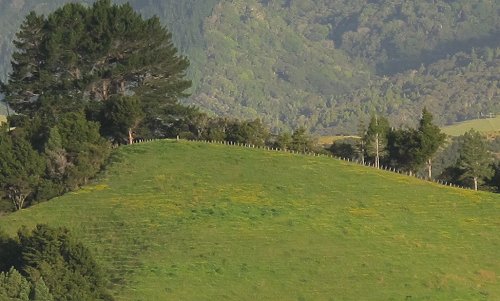 Standing at the top of the PW this evening (where I was checking cows and hunting for Ragwort) I could see that what began as only a hint of yellow on the hill over the road, is now a significant colouring.  It's the plant commonly known as Lotus major, although that's apparently its former name and it's actually Lotus pedunculatus, a very useful legume.

Stephan says he understands one of the former owners of the farm spent years sowing Lotus around the hills. 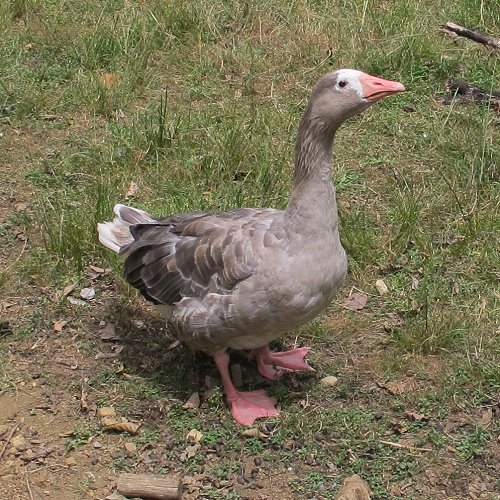 Old Madam Goose, who's been with us for several years now and still looks to me as she ever did, although I see in the photos on the day of her arrival, that she was not quite so white over her head when younger. 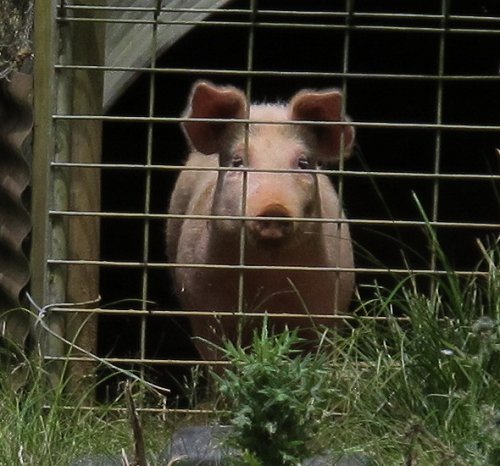 The pigs are growing and growing and growing.  I don't visit them often, feeling unhappy about their future prospects - not that I don't want to eat pork, but that I choose not to become very close with animals I will later eat.  You have to be quite "hard" not to think of them as the individuals they were when sitting down to dinner and while lots of people can do that or can train themselves to do it, I find it emotionally challenging.  At least I think that's my problem; maybe it's as much to do with simply not liking pigs very much.  They're violent buggers and one, during my teens, killed and ate my pet duck. 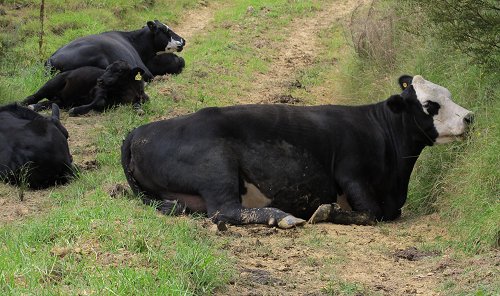 I happened to be watching 517 as she sat down here this afternoon.  I think she miscalculated the space and terrain, so that when she was down, she was sloping uncomfortably the wrong way, as well as not having sufficient space to hold her head at a comfortable angle.  She stayed there though, for a while, although I bet it wasn't long before she repositioned herself. 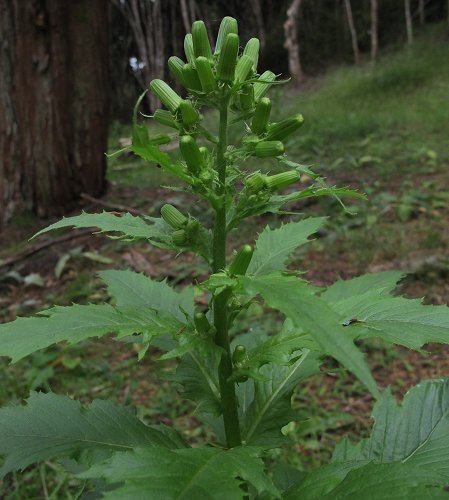 I've not discovered its identity yet, so please tell me if you know.

It looked dangerous, so I beheaded it, put the flower buds into my Ragwort collection bag, pulled the plant and hung it in a tree.

Very late this evening (actually into the early hours of the morning) Jim, my old friend who's lived in England for the last two decades, and his nine-year-old daughter, Thea, arrived.  They got a bit lost and eventually Stephan went out in the ute to see if he could spot them somewhere and eventually they all arrived home.

I was supposed to be at a Board meeting today, but discovering that Jim and Thea were only going to be here for two days instead of the four I had expected, I decided that sometimes one's personal life needs to take precedence over other things and tendered my apologies.  I was also hellishly tired, and knew I'd find it difficult concentrating on anything much during the day. 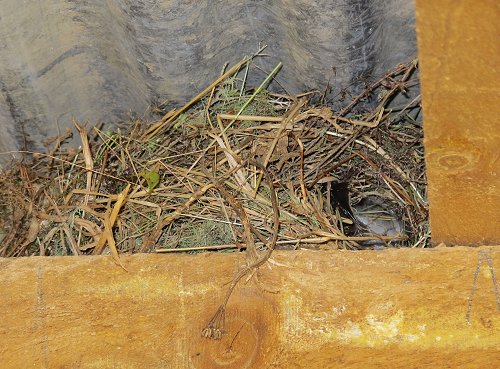 The Sparrows in the cowshed have settled into their new home.  We'll hear the cheap of hungry babies before long.

I think the entrance to the nest is the bit with the white feathers showing.  I didn't want to poke around and disturb the birds. 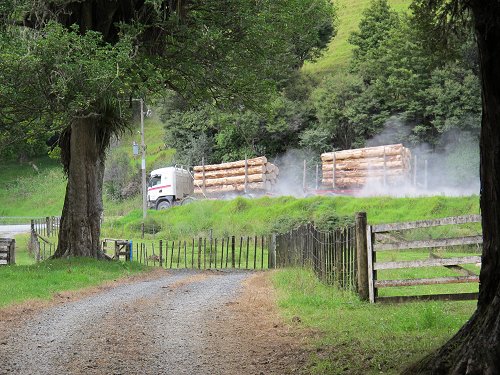 Logging trucks have been thundering down the road for a few weeks, but this is the first one I've actually seen.  Because it's been so dry, great clouds of dust drift across through the trees from the road after they pass.  They travel up the road with their trailers "piggy-backed" on the front part of the truck, so they're potentially not quite as alarming for other drivers when they're coming up the road as they are going back fully laden.  Diggers Valley Road is not wide! 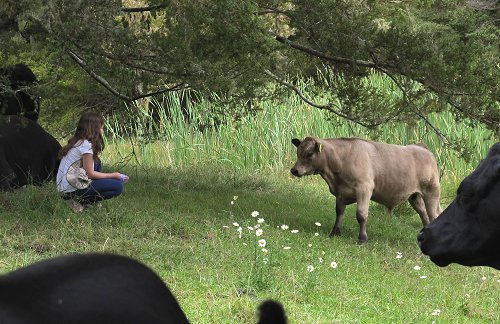 We took Thea and Jim out for a walk when I went to check the cows.  Thea seemed quite unperturbed by them, although it couldn't be said that the cattle felt the same about her.  There's something about the movements of children that cattle do not like, and I was continually trying to get Thea to slow down and stop darting ahead of me as we moved amongst them.

But the quieter cows were quite calm with her and she groomed a number of them and tried to befriend others. 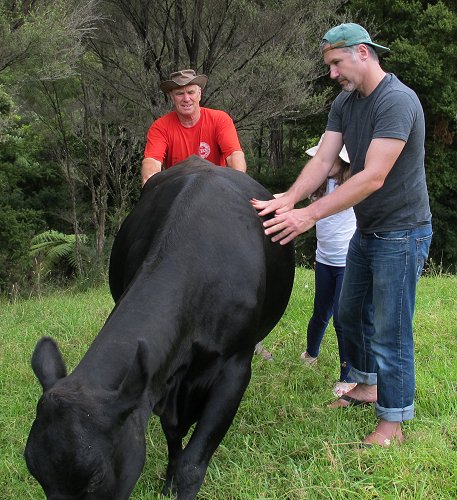 Demelza always gets the best treatment, partly because she'll let almost anyone touch her and often because she simply insists, by turning up and nudging people until they do what she expects.  Massage and Reiki were on the menu today.  Lucky cow.

The weather has been so dry that many of the epiphytic ferns are drying up.  They'll recover again later in the year, but they look miserable now.  We've had no significant rain for a month. 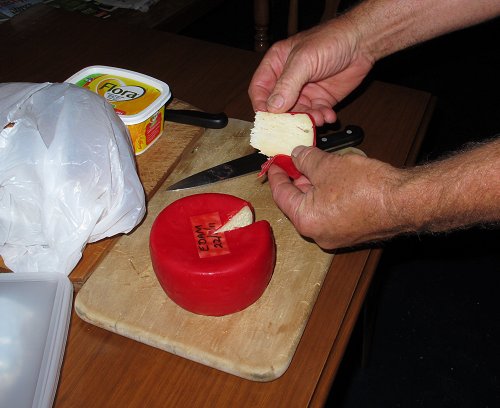 Stephan cut the cheese he waxed in November and while it wasn't quite as it should be, it wasn't inedible.  More experimentation and practice is probably required. 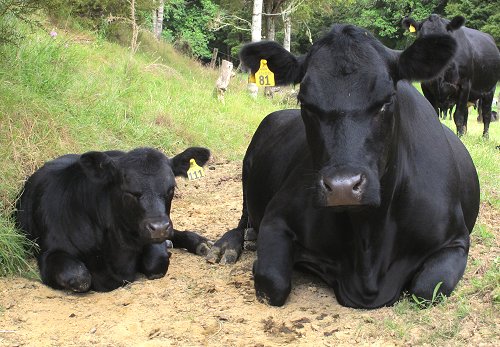 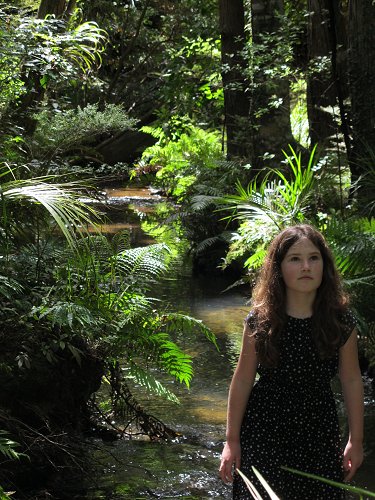 Before Jim and Thea left this morning, we took them for a stroll amongst the big trees in our reserve near the house. 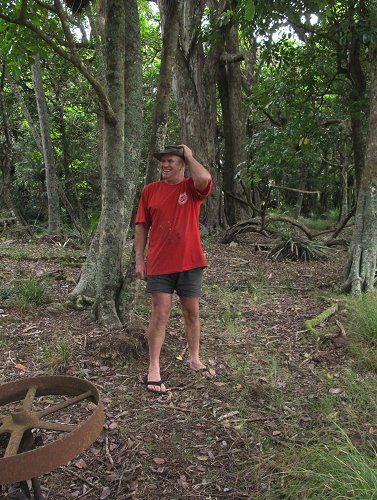 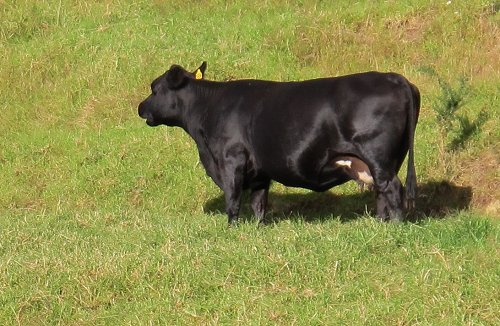 539 in the sunshine in the Middle Back Paddock.  I've always liked this cow, although last year I thought I should consider culling her due to the skew-faced heifer she produced.  I may have the opportunity to see that animal in the next few weeks, so perhaps that will further inform my decision.

539 is one of two Arran 20 daughters I've kept in the herd and is doing a very nice job rearing her calf this year, as well as maintaining herself in exceptionally good condition. 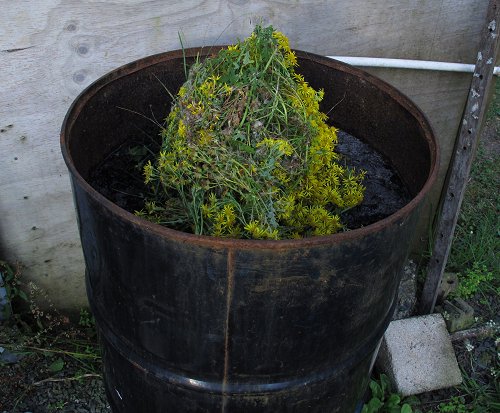 How to deal with Ragwort: we bring our bags or sacks of flowers home and empty them into this drum which is half-filled with water, then push them down into the liquid with a long pole.  A few days after the first flowers went in, there's already a good mat of rotting material, under which the new stuff will end up, preventing the new flowers from sitting on top and then going to seed.  It smells very bad, but if we left it dry, the drum would be full of seeds which would fly out whenever we took the lid off. 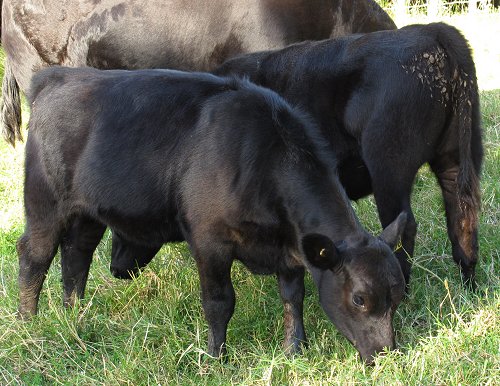 I only needed to take this one photo to show what these animals look like from either end: the twins.  That is because the test results are finally back and the two calves are identical twins.

I did a bit of searching for mirror twins, having heard something about them somewhere, and wondering if the various slight differences in these two fit with that possibility: they have an extra teat each, on opposite sides, and if you look very carefully at the photo I posted of them a few weeks ago, you'll see their facial hair whorls circle in opposite directions: 698's is clockwise and 699's anticlockwise.  Apparently 25% of identical twins are mirror twins, resulting from a late split in the embryo.

I'm very excited about the result, even though they're not the best-looking animals I've bred.  I'll definitely keep them, hope nothing untoward happens, and see how they continue to mirror each other in development.

They both still have dirty rear ends, which might indicate they'd benefit from a drench.  Normally I wouldn't do such young animals, but they have probably had to rely on more grass than the other calves because of their reduced milk intake, which could mean they've picked up more worm larvae.  The fat cow behind them is not their mother.