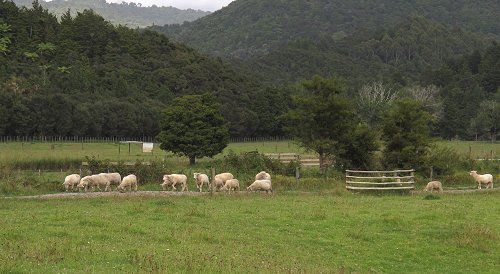 Crazy sheep, got out the top of Flat 1 (probably under the gate) and came down the House lane.  I opened the Flat 1 bottom gate and put them back in again.  Ha. 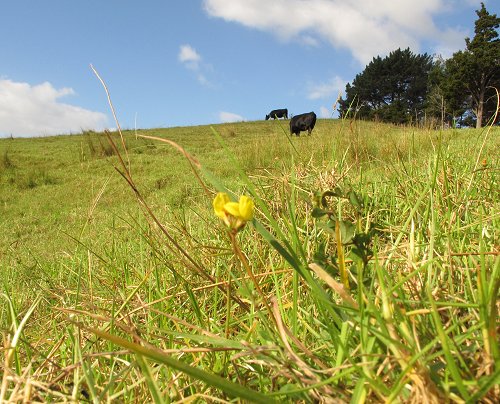 After a week's grazing, the cows have eaten nearly all the yellow flowering Lotus.  There is only the odd flower here and there on the hillside. 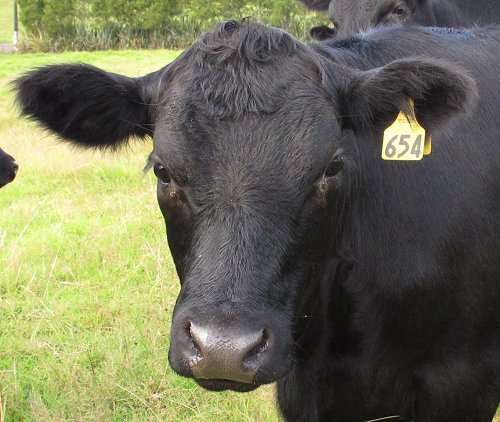 Heidi and Dave invited us to go and have a look at last year's calves and see how they'd grown.

This is 654, 539's daughter.  I was keen to see how her twisted facial features had developed.  It seems she has continued to grow quite evenly, so that the twist has not worsened and she lives an ordinary sort of life.  Maybe it's just one of those chance happenings.

I am pleased she is alright, because her mother is a very nice cow. 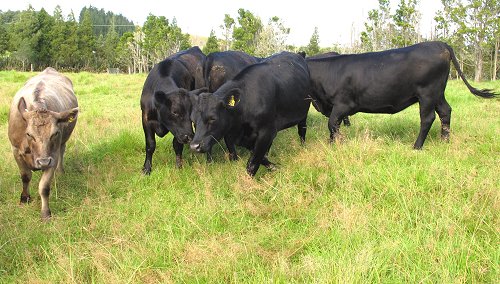 The heifers are all looking really nice.  The wild white-faced heifer is still pretty spooky, but the grey is quieter than she was. 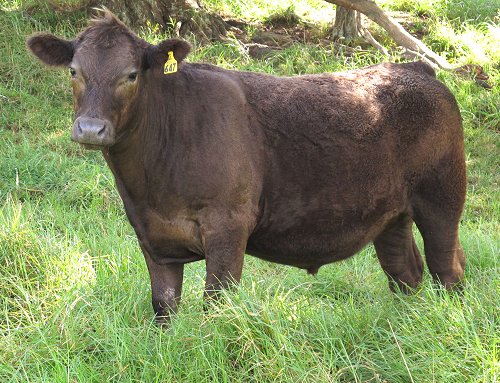 This is Curly's son, the steer which suffered from repeated Coccidia infections last year.  Cocci infection is supposed to have a long-term effect on an animal's growth, because of the damage it causes in the small intestine and the gut's ability to absorb nutrients.  I doubt there'd be many animals much worse affected by the infection than this one was without actually dying, but he's grown into a fine looking creature. 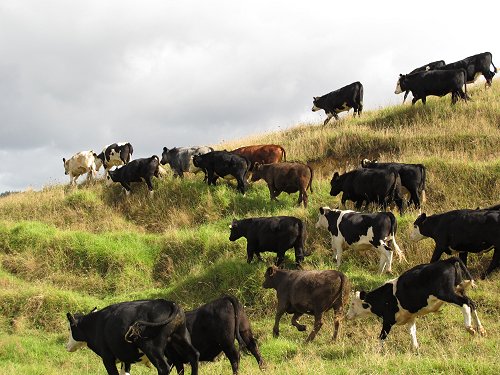 The lovely black and brown steers now live in a liquorice allsorts mob. 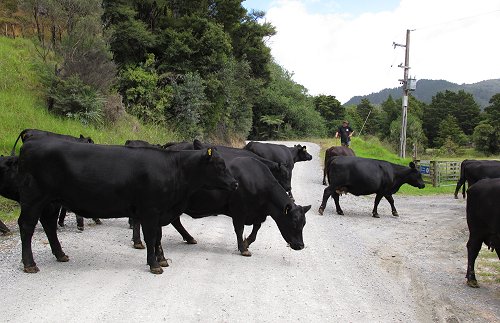 Back at home we called the cattle down to the gate out of the hill paddock over the road and brought them across.  A vehicle came along the road as the cattle were crossing, and we let them through when there was a break in the flow of animals.

Look at those nice feet on the hard surface!  The feet of the cows have improved over the years, by the use of sires with good feet and by some good luck along the way.  It's not always possible to tell whether or not a semen sire's feet are good and I suspect in some cases they have not been.  But when I've bred bulls which have had good feet and used them, their daughters have usually inherited that trait. 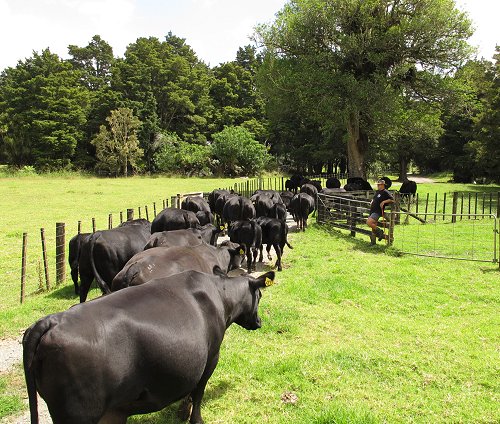 In our usual urgent manner we hurried the cattle out to their new paddock.  Yeah, right. 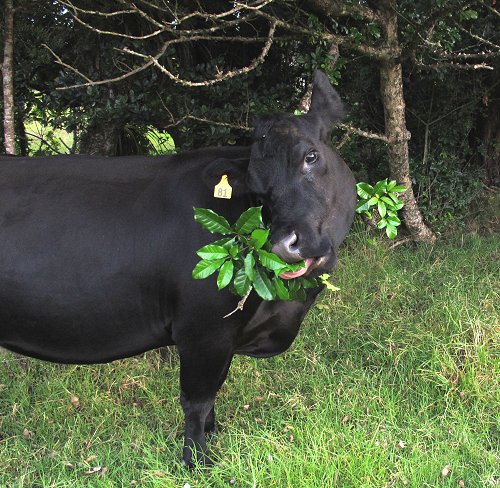 Later in the day I went over to check them all over properly and watched Eva working out how to reach some nice Puriri leaves at the end of a branch above her reach.

She worked her chin over the branch at its lowest point, then hooked it down with her neck, then turned to grab the leaves with her tongue.

I wonder if she learnt this from someone else, or figured it out for herself? 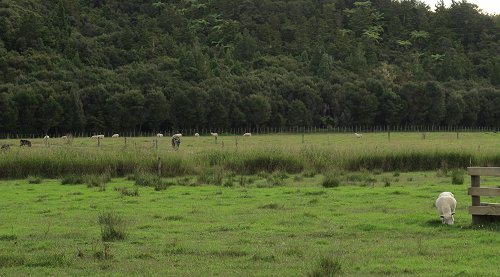 The rest of the sheep have left Yvette again.  She seems comfortable enough, but sheep are mob animals and don't like solitude; I suspect she'd prefer to be with the others.  I left the top gate open for her to wander out of the paddock and up the lane, but she stayed here. 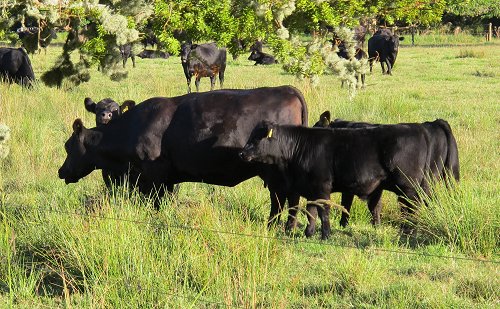 528 was on heat, being followed around by a lot of little steer and bull calves.  She had two cycles with the bull, so I don't know why she's not in calf.

I am disappointed, because I've always liked her and have no daughter in the herd.  But her sisters are the white-faced cows and there are nieces staying on.

I'll be out all day tomorrow and want the cows to come into Flat 1 and I suspect the calves would chase Yvette, so I led her slowly up the lane with the promise of some sheep nuts and maize, to the rest of the mob in 5b.  Once there she had a long rest.  (That's Yvette, sitting down at right.) 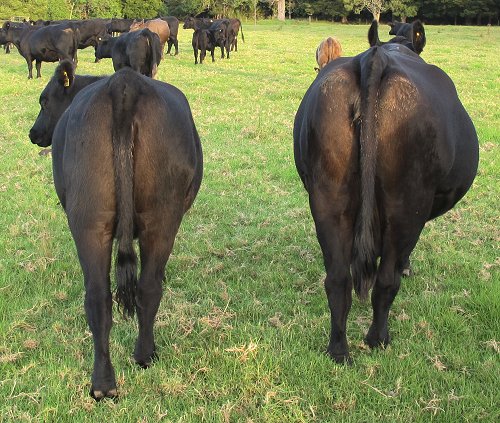 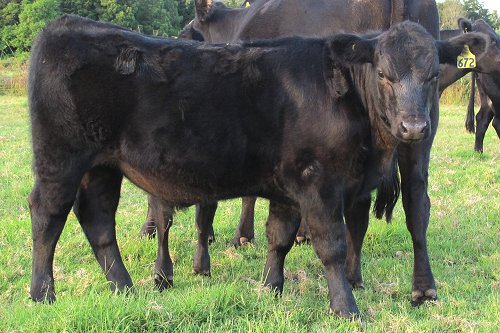 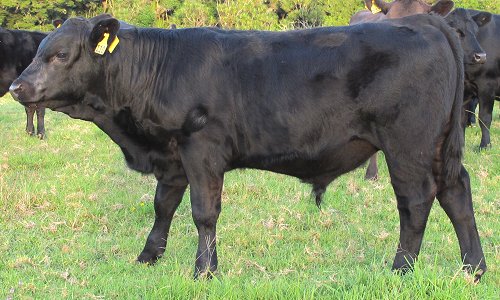 I gave Irene 35 her first twice-daily dose of the Homeopathic remedy, Viburnum, today and will do that for the next three days, then once a week from then on for the first half of her pregnancy.  As I've said before, I have no strong view on homeopathy one way or the other, but because I can't do anything else about Irene's condition and the safety of her gestating calf, I will try this.  Last year I didn't give her the remedy and she lost her calf.

Up really early this morning, Stephan milked the cows - all for the pigs, so I wouldn't even have to process it - and I shot out to give Irene her homeopathic remedy spray and then we drove down to Whangarei for the day.  We went to help Jill tidy up some of her paperwork, because sometime in the next few months her house will presumably sell and she'll need to move.  Better to have prepared while we have time, than have to get everything done in a rush!  We arrived home with just enough light to still see the cattle. 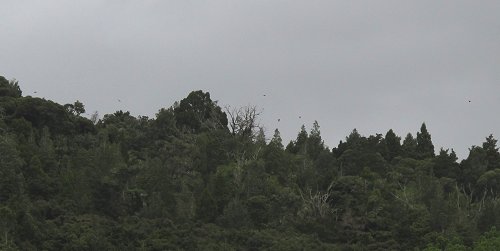 I can't find any reference to the last large flock of Kukupa (native wood pigeons) I saw a few years ago, but there were seven or nine of them.  Today I saw a flock of eleven fly over the flats and off up to the bush.  When they'd passed, I saw another two pairs in nearer trees, so that's a definite population of thirteen.  I've been reasonably confident that they're doing well here, seeing what look like family groups with youngsters most years, but it's hard to know how many there really are around, unless they're all conveniently in the sky at the same time. 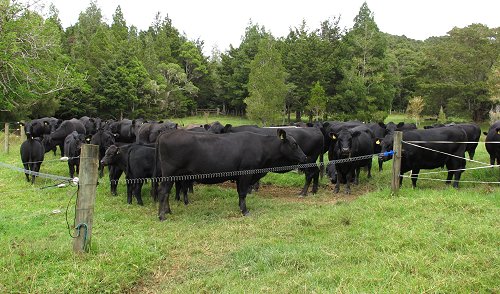 I sent the cows and calves (87 animals) to the Big Back yesterday and I don't think they want to be here!  Sometimes they'll go into a paddock and there's something not quite right for them and they really don't like it.  It'll be something about the growth phase of the grass, perhaps, or maybe they're just moody madams and liked it better where they were. 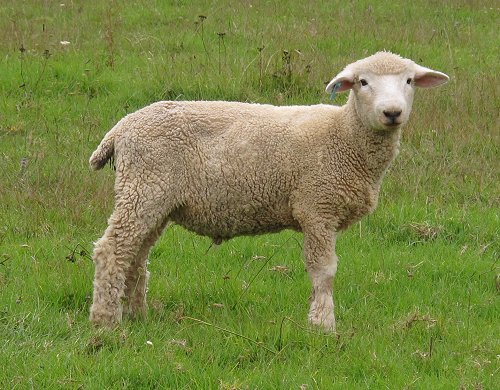 Little sick lamb is looking better than he did last week.  He's still very thin, but he's no longer completely miserable.  He and his siblings all have droopy ears, thanks to their sire. 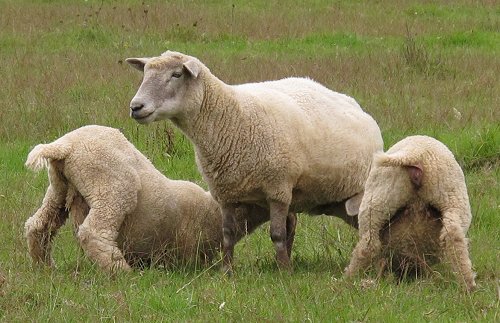 Dotty's lambs are still feeding, although I never see them under her for long because she moves away quite quickly.

The lambs' tails appear longer than usual at present because Stephan shore them before the ringed bits dropped off, and there's a bit of extra wool where he didn't shear to avoid catching the rubber ring. 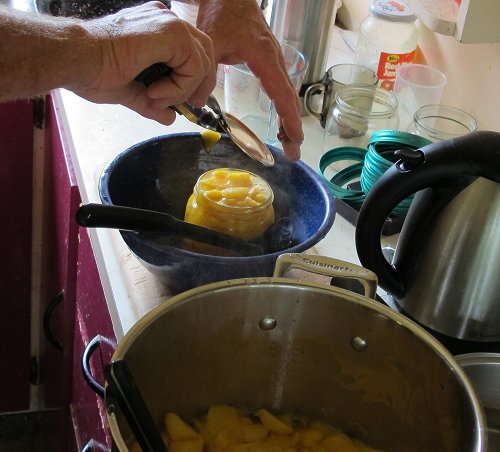 Stephan spent a couple of hours bottling peaches from our lovely tree.  It's a Golden Queen and the fruit is delicious.  We'll eat them from time to time through the winter months. 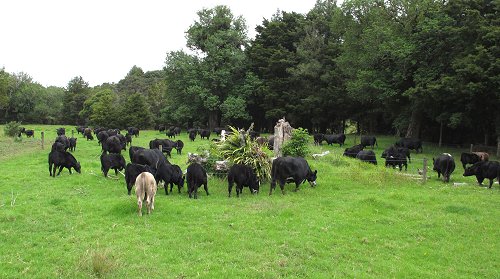 The cows continued to look pretty unsettled in the Big Back and had grazed it down anyway (87 animals will see to any paddock reasonably quickly), so I let them out into the Bush Flat.

The tree stump in the middle is the remains of the tree we felled last year.  There are new shoots growing from the base of the trunk, but there's also quite a lot of fresh growth from some of the branches too, which suggests they may be doing what Puriri often do and sending roots down where they lie.