L-J and Fran left us this morning ending a long and enjoyable string of summer visits from many friends and family. 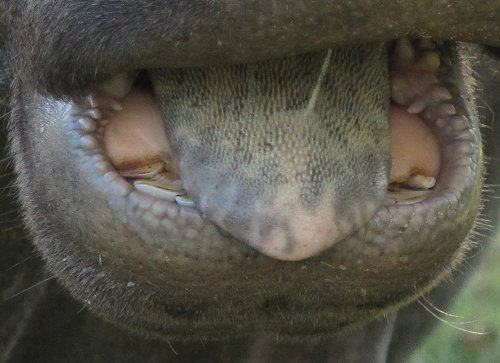 I spent a few minutes watching Curly's mouth this afternoon, catching a couple of clear photos of some of her teeth.  I'm keeping an eye on her because her mother, Fuzzy, lost at least one front tooth before she should have done.

Curly's penultimate incisor has just erupted (on her right side, our left) and the last immature front tooth is on the right of the picture.  Curly is nearly 4½ years old. 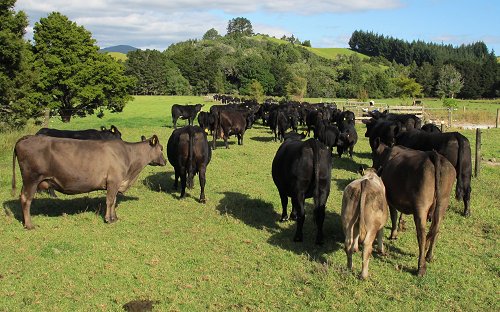 The cattle slowly left the Camp Paddock this afternoon, drifting down the lane toward the yards, then we put them over the road and up the hill. 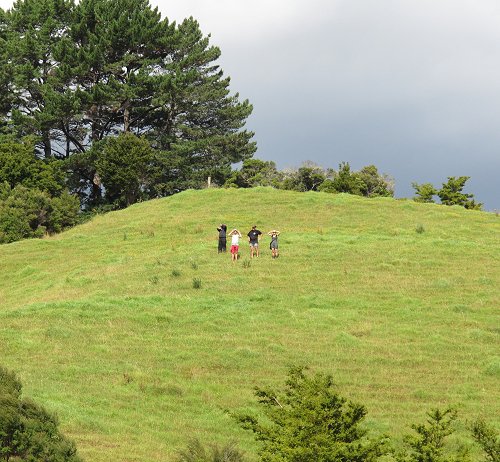 Stephan and I spent most of the day building a live capture trap - he built, I photographed - so I could write a (hopefully) explanatory article on how to build one for readers of NZ Lifestyle Block Magazine.

As we were nearing completion, Mike, Chantelle and Eric arrived for a visit, so we took them over the road and up the hill, where I don't think we've taken them before.  I checked cattle as the others walked directly up to the look-out. 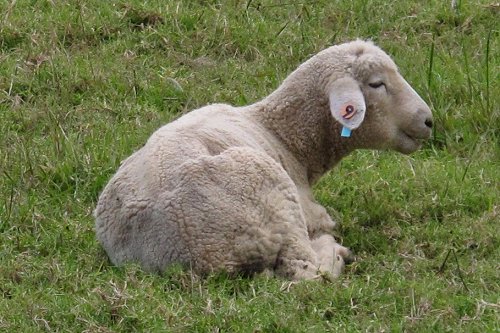 This little sheep is not well.  I suspect he is overburdened by intestinal parasites, possibly including Barbers' Pole (Haemonchus contortus).  Tomorrow I will purchase some drench and treat the lambs, or this one will probably continue his downward slide in condition and health, and die. 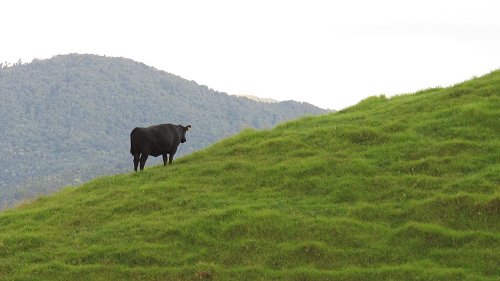 I went back over the road to find the cattle I'd not seen earlier in the day.  I think this was #86, ruminating on the hillside.  I liked the perspective, and the colours. 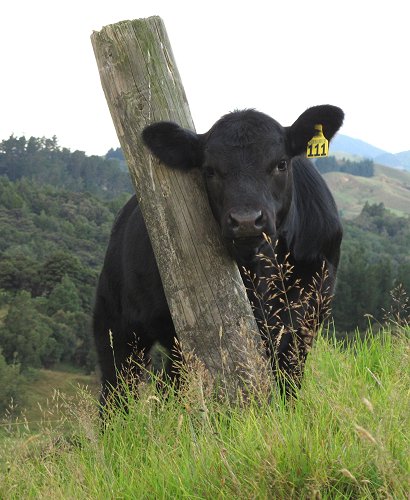 I sat in the grass for a while and watched as Emergency rubbed her face and neck on this old fence post... 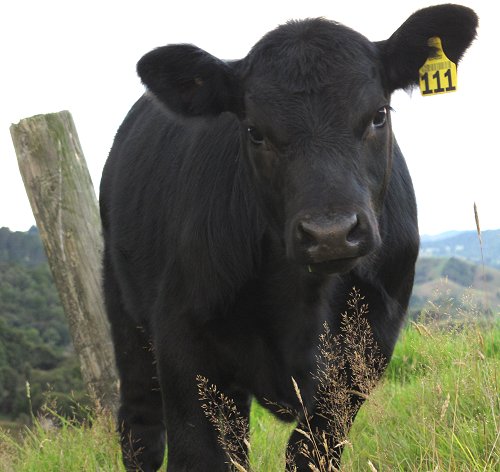 ... and then continued to sit quietly as she came over to see what I was doing. 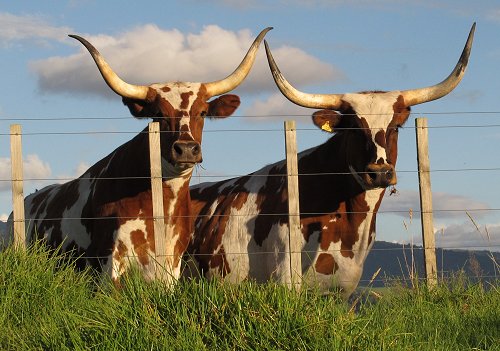 Freaky neighbours!  I got one hell of a fright when these two came thundering up the hill to the boundary fence this afternoon. 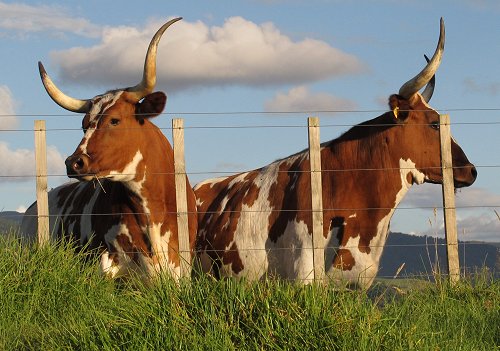 What impressive creatures they are.

We talked to one of the guys who owns them a few months ago and he said they'd used some Texas Longhorn semen in the Ayrshire cows (just for fun, I think) and produced these two beauties. 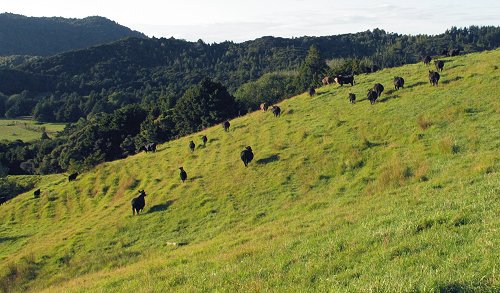 My cows all ran away in alarm. 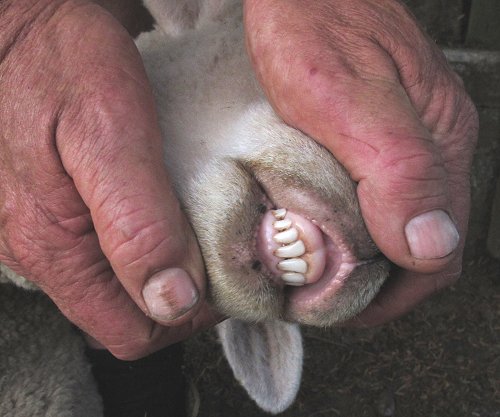 Stephan came home with some drench and we put the sheep into the cattle race, weighed the lambs and drenched them.

We had a look at the gums of the sick lamb, to see if he was obviously anaemic, which would be a certain sign of Barber's Pole infection, but he still looks pretty pink to me.  He doesn't hang back from the rest when they're moved either, which is another sign to look for.  I think he's in need of some help from a drench for whatever else he's harbouring, and I'll watch him over the next couple of weeks for signs of returning health.

In this picture he's the lamb on the left, his brother is in front of him and their mother is the sheep furthest from the camera. 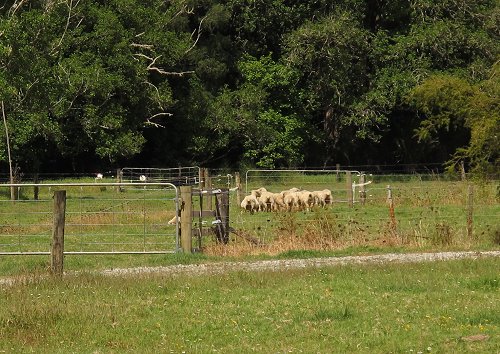 We put the sheep in Flat 1 last evening and today I could see they were up to something.  Sheep aren't subtle about planning unruly behaviour.  Just after this they all shot down to the left and then gradually most of them appeared over in Flat 2. 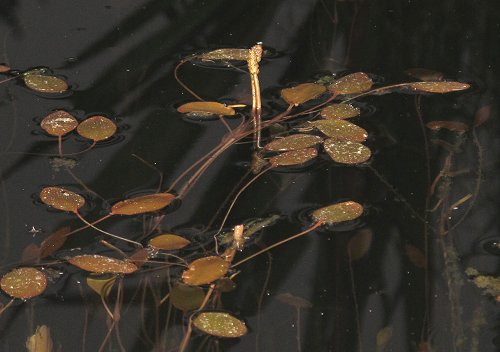 The new pondweed plant has already thrown up some flowers. 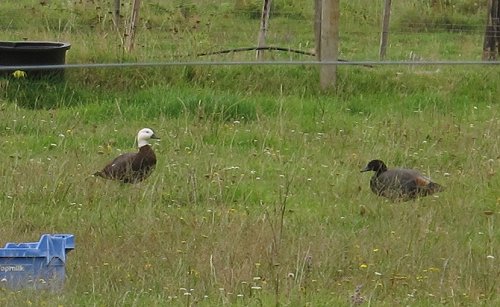 Our closest resident Paradise Ducks have returned to the House Paddock, in their brand new plumage.  They've been away for several weeks, for their annual moult. 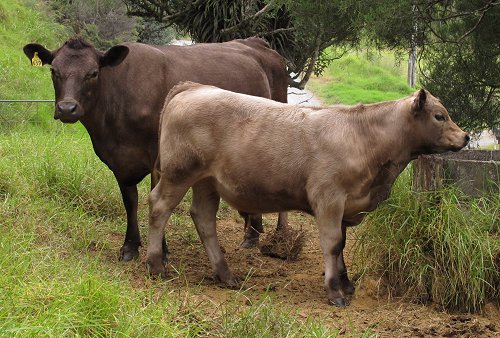 639 has the largest udder of the young heifers and has reared her calf as well as her cousin 607 did last year when she was the same age.

Today it rained and we certainly needed it!  The last we had was on the morning of the 15th, and a follow-up fall was necessary for its usefulness to be sustained. 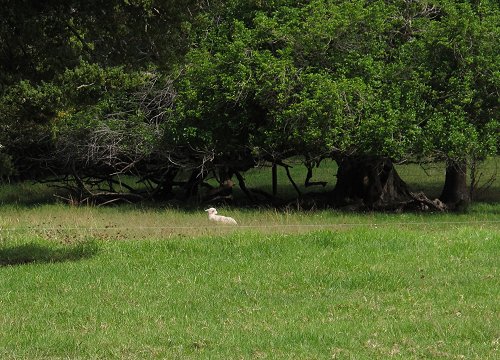 Yvette is now on her own.  She's too old and stiff (or too well behaved) to go through holes or gaps in the fences and her failing front legs are too sore for her to range across the flats as the other sheep are doing. 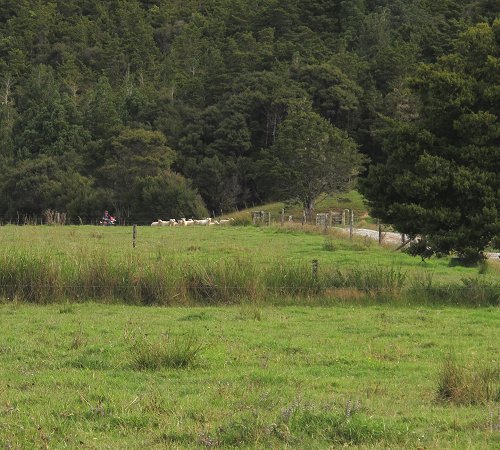 The rest of the mob had made their way through various fences, and then through an open gate into Flat 4, where I don't want them, because they're too close to the neighbours' place whence once came a vicious dog which killed and injured some of the flock.

Stephan went over to round them up and send them back down the lane and Jill (who's visiting again) and I put them back in to Flat 1 through the top gate, so Yvette will have company again. 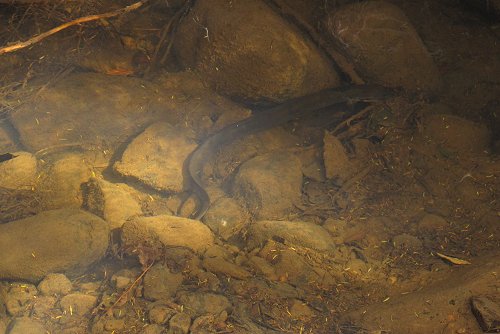 Jill and I continued our walk.  In the last crossing the sunlight caught the shape of a small eel.  Eels feel fabulous to the touch under the water, so smooth and firm.  I managed to stroke this one a little, but it swam backwards away from me, then into a deeper place I couldn't reach.  It had a dark mark in the shape of a large apostrophe on the back of its head.  I'll have to look out for the same eel again. 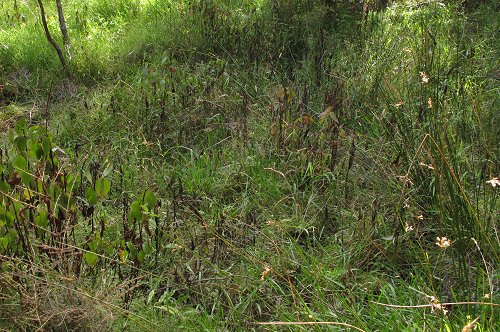 When Stephan was out in the Back Barn paddock spraying gorse and ragwort, he tried some of the herbicide on the Beggar's Tick plants and here is the result.  In the left foreground are some still-green Mexican Devilweed leaves, but of greater interest are the dead, blackened stalks of former Beggar's Tick plants in the middle of the picture. 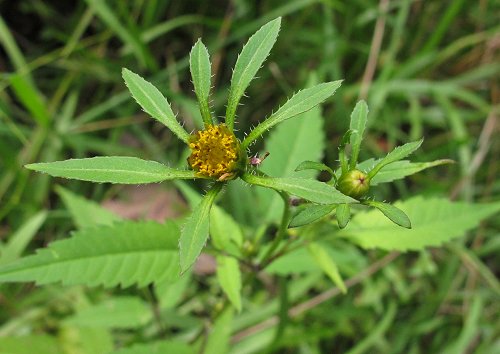 A Beggar's Tick flower.  There's not much to them, but obviously enough to attract whatever insect pollinates them very successfully to ensure prolific seeding. 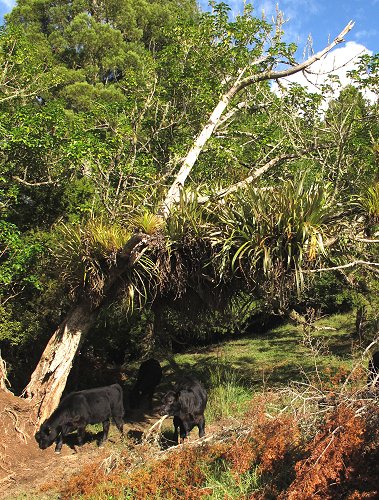 This piece of an old and decaying Puriri tree gives me the jitters.  It'll fall down without too much prompting, so I'll ask Stephan to fell it before it falls on something or somebody it shouldn't.  Stephan has already done some clearing up here (hence the brown Totara prunings), ready to begin fencing up the edge of the gully to the left.  The larger section of the tree is also breaking away from its base, but is falling toward the gully and still held up by the other trees around it.  Once the fence is in place, it won't matter much when that part falls. 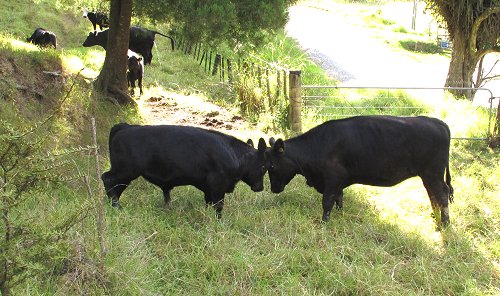 I was surprised to see a serious bit of fighting between one of the bull calves and a yearling heifer.  Normally the size and age discrepancy would prevent such skirmishes, the calves learning quite early in their lives who they can take on and who will teach them a lesson in manners if they try anything.  Either 113 hasn't learnt that lesson, or he's feeling bigger than he really is.