The week beginning the 3rd of March 2012.
Saturday the 3rd 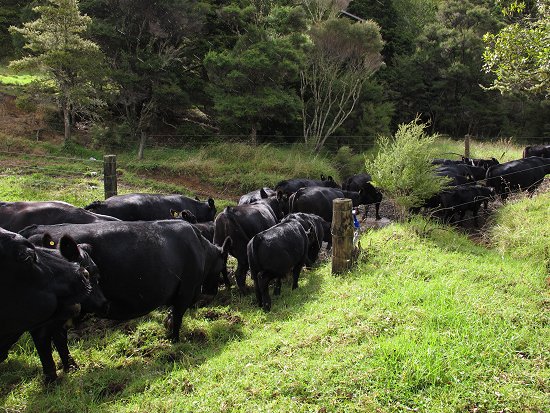 I love watching cattle move together.  I'd opened the gate out of the paddock and across the stream, but the cows didn't notice until I led them toward it when I'd finished checking them all.

They all went to the Pines, which is a small paddock for so many together, so I'll move them again tomorrow. 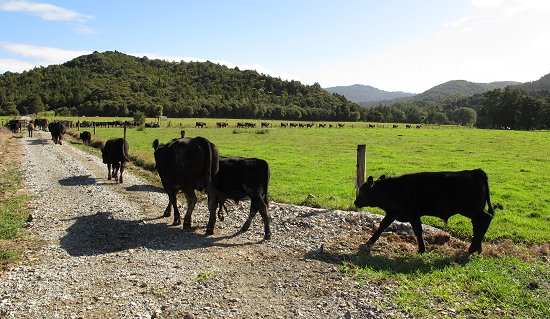 Little 116 was due for his booster shot of 7in1 vaccine.  There wasn't any easy way of drafting him and Abigail out of the mob this afternoon as they left the Pines paddock, so I let all of them drift down toward the yards.  (116 is a month younger than everyone else and when they had their second injection last month, he had his first.)

Some of the cattle had turned and gone out toward the Back Barn paddock where they were to go next, but most didn't go back that way until after I'd finished in the yards and sent them back.

I well remember having to chase animals across the middle of the Windmill Paddock to the right, before we started putting the races in.  Getting cattle to the yards had to work in with the grazing rotation, because otherwise it was almost impossible to get the cattle across paddocks full of nice grass.  There are only two paddocks on the farm now to which we do not have direct laned access: Flat 5c (c for corner) and the Middle Back.  At some point we'll fence off a wet area and Route 356 along the bottom of the PW, which will enable us to get directly to the Middle Back, and would allow access to subdivided parts of the PW, when we get around to those fencing jobs.
A farm map is available, but requires a password before you can view it.  If you'd like to see it, or have lost your password, please email me. 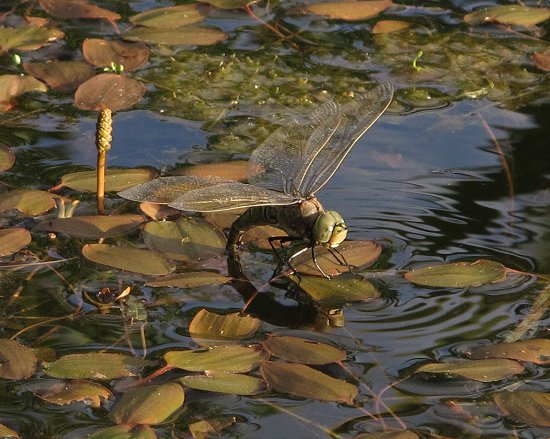 I went to photograph the development of the pond weed and happened upon this dragonfly, completely oblivious to my presence in her concentrated egg-laying.  She was quite a large insect, with a body around 3½ inches long (9cm). 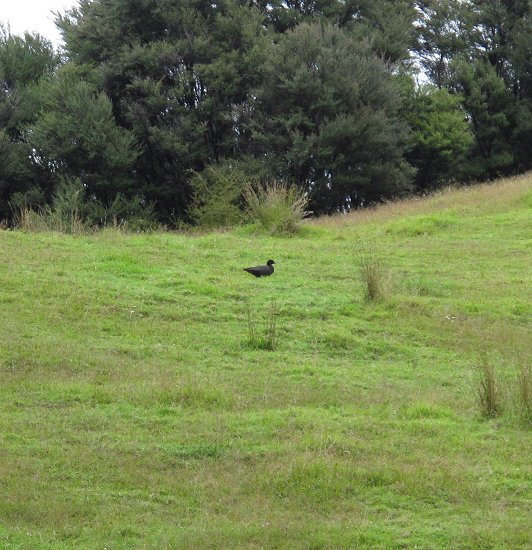 I heard a male Paradise duck yesterday when I came out to open the Back Barn paddock gate for the cows.  Normally Putangitangi (Paradise Ducks) will fly away when approached, but this one walked down through the river crossing and up the other side somewhere out of my view.  Today I watched him walk up the hill and found him again later up the top.  I wondered if he was injured, but as I approached, he eventually flew off without any apparent difficulty. 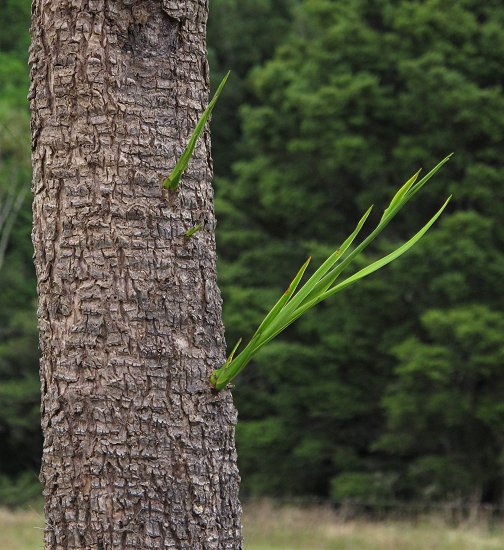 The Cabbage Tree in the garden has put out two more shoots! 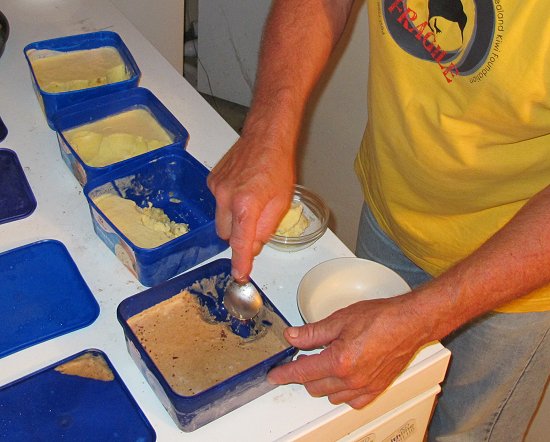 Stephan regularly makes ice-cream and it is of course my duty to eat it.  It's a tough job, but someone has to do it. 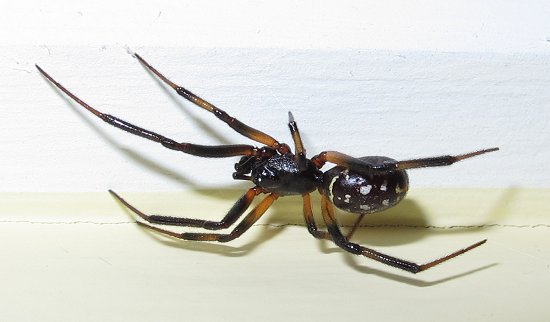 A number of these spiders have appeared around the house in the last few days.  I haven't yet been able to identify them.  Do you know what they are?  They're not much more than 1.5cm, or ½ an inch long. 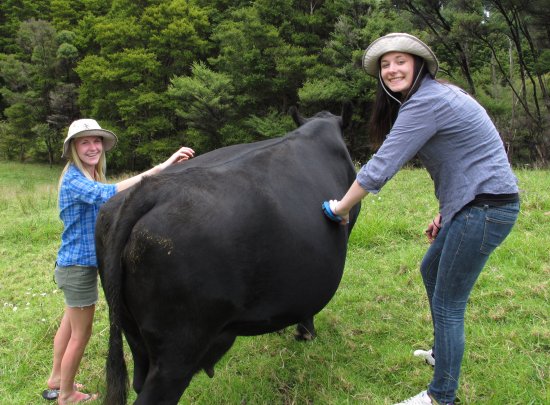 I had a surprise phone call yesterday from my friend Cliff, who's back for another visit from Canada, this time with daughters Callyn and Jaidan.  I haven't seen these lovely girls since I first met them back in 2006. 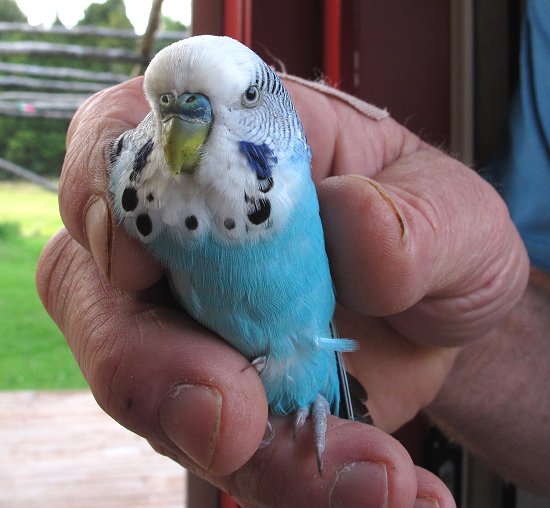 When Stephan was up feeding the pigs this evening, this pretty Budgerigar flew down beside him and he was able to catch it.  It is being just as grumpy as it looks in the picture, and has a really vicious bite!

We set up one of the cat cages for it, with a couple of perches and some water.  I offered it a few sesame seeds, having not much else of any use in the house.

Went to town and acquired Budgie seed.  Bird much happier. 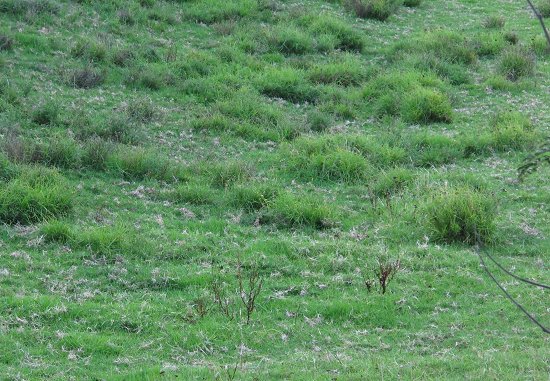 On our way to Whangarei again, I stopped to take some photos of a paddock beside the road, where I was told I could see the next big weed problem for the Far North: Gravel Groundsel, Senecio skirrhodon.  It's apparently synonymous with Senecio madagascariensis , which has spread across South East Australia, where it is referred to as Fireweed.  I'm not entirely sure why nothing is being done to eliminate it from this relatively small area, before it becomes a wider problem for us all. 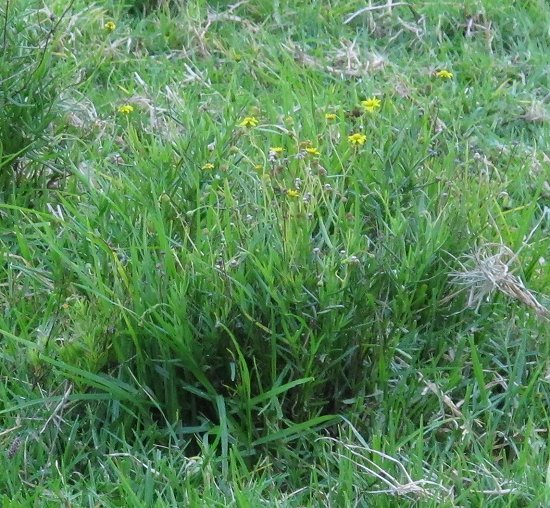 Like its Ragwort cousin, it is toxic to stock, produces multitudes of windborne seed and is hard to eliminate once established.

The clumps in the photo above were so obviously different from the normal appearance of Northland pastures, that it wasn't hard to determine where the weed was to be found.

I wanted to have a look at this plant particularly because it was from this property that our river gravel came three years ago and it is quite possible we could have brought seed to our farm.  I recall pulling a number of yellow flowering plants out along the tracks, but haven't yet found any pictures I may have taken of them at that time. 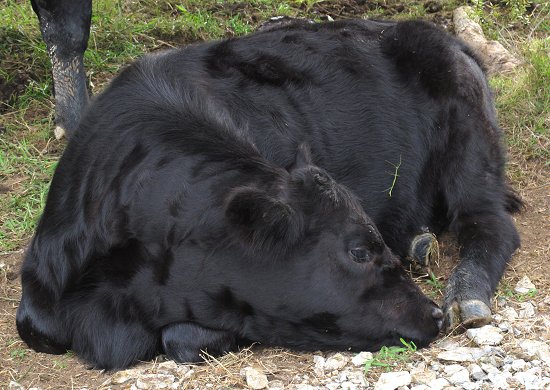 Cute enough to cuddle!  Sadly she wouldn't let me.  She looked like a big black cat, asleep at her mother's (Queenly 23) feet. 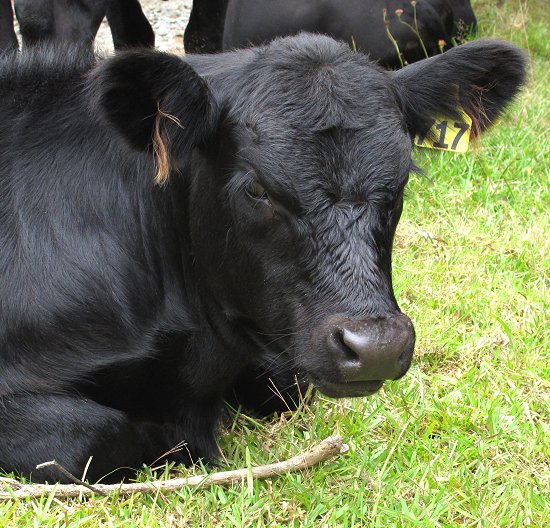 717 is 606's daughter and she has the same highlights in her ears as her elder sister did last year.