The week beginning the 5th of March 2011.
Saturday the 5th

As I approached the cattle this morning, I couldn't figure out why the separated heifer was pacing the fence with a black animal, rather than her white-faced mother: it was the bull, along with one of the two bull calves.  This heifer is definitely having a proper heat and I'm very glad I got to her before the bull did.

I called her mother, 470, over to the gate and popped her in with her calf, leaving the two of them alone together.  The bull looked like he'd like to jump over the fence to join them!  Electric fences are good to have.

The calf immediately tried to mount her mother, had no interest in having a feed, which I expected she would want after twelve hours separation from her milk supply, and then returned to the fence where the bull was waiting.

In the evening we had rain, measuring 30mm, much of it falling while we were attending a birthday party where some of us sat and ate our dinner under a large (waterproof) sun umbrella, while the rain poured down around us.  The weather is lovely and warm. 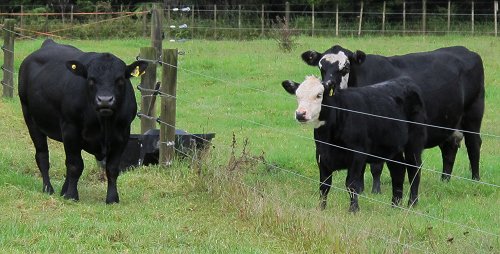 660 is still attracting the bull's interest this morning.

Realising that perhaps I had made an error in putting the bull back with the mob, I cut him and Demelza back into the paddock as I let the others leave.

When the vet clinic was still open yesterday I made a call to try and arrange for some pregnancy testing for the cows and Nathan phoned me today and said he will come tomorrow.  If I know who's definitely pregnant, there will be no need to keep them with the bull, with the attendant risk to their daughters. 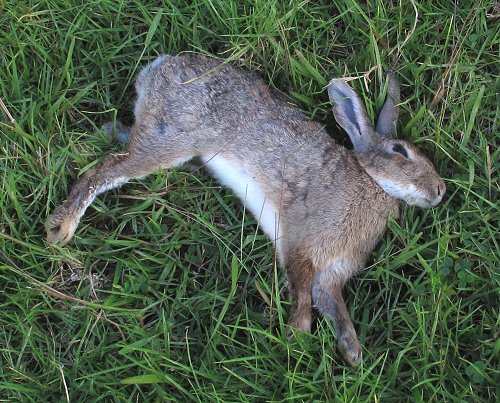 We keep finding dead rabbits.  Not great numbers of them, but every few days we come across one lying, looking like it just stopped being alive.  We wonder if there has been a new release of one of the rabbit diseases in the area?  This one's body was still warm, but quite stiff. 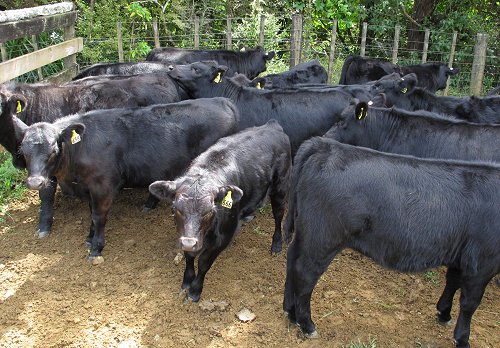 Usually when we pregnancy test, Stephan and I are both here; but today I was on my own, so I started early enough to get all the drafting done without having to hurry.

I separated the cows and calves, then put four of the calves into the race so I could take tail hair samples from them for testing.  Down in the grassy yard I'd taken hold of some of white-face 601's tail hairs and pulled them already.  They all went into their own envelopes with each ear-tag number recorded on the outside.  I'll send them off to the lab for testing for AM or NH.  601 is the daughter of #49 who tested NHC, two of the heifer calves are daughters of AM carrier cows (Dexie 46 and Ida 75) and Squiggles' daughter was sired by an AMC bull (Ardrossan Connection X15), as I used one of the remaining straws for an insemination I didn't think would work.  (Squiggles had a strange lump on one side of her cervix and my first insemination had failed.  When she came back on heat again, I decided to use one of the AM carrier straws, thinking I didn't have much chance of getting her pregnant anyway.)

After I'd dealt with the calves, I put the cows up into the top yards and waited for Nathan to arrive, which he duly did, almost exactly on time as usual.

The results were good, with no surprise "empties".  A couple of the late-mated cows' pregnancy status couldn't be determined, but I'm reasonably confident they'll be in calf.  Those can go back out with the bull for a couple of weeks, just to be sure.  I didn't test Abigail, since I know she's still cycling.

After I'd stopped for a break, I drafted the cattle, putting the bull calves and their mothers in with the bull and the two late-pregnant cows (which luckily don't have daughters).  Abigail and Imagen and their calves are now their own little mob and I'll either get hold of the semen bank when Abigail comes back on heat, or put her in with the bull for a few hours.  I really don't want to risk leaving her daughter in a mob with an adult bull.  Imagen's calf, while big, won't yet be fertile.

The pregnant heifers and cows and calves are now a big mob of 72 animals.

Another of the dangerous little gullies, where the water has worn deep channels down the hill.  This is just down the hill from where lovely heifer 410 died after she fell the wrong way into a hole at the top of the gully.

Stephan spent a few hours here, pruning the low branches from Totara trees on these faces, and piling them into the gully in the middle.  The water will still run beneath, but the branches will prevent the cattle from venturing so close, and the clearer hillside will give them more room to move without going so close to the dangerous places. 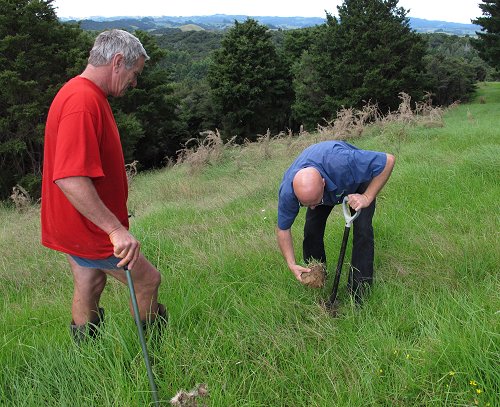 Late this afternoon Steve, a guy we talked with at the Dargaville Field Days, came to talk to us about his company's liquid fertilizer and to take some soil tests.  I was particularly interested in liquid fertilizer applications for the difficult places the fertilizer truck can't get to, so we headed up into the PW to take some samples.  We started with an earth-worm count and found a few more than I expected at the top of the hill in dry, warm weather.  Fourteen in a spade-width hole isn't a huge number, but it was better than I thought we'd find. 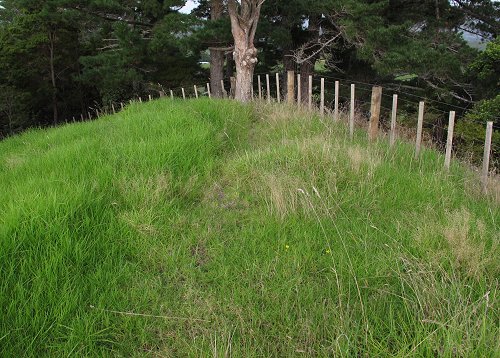 This is where the old fence used to be at the very top of the paddock over the road.  On the left is Kikuyu which has been regularly grazed by my cattle and on the right, having been left to grow for just as long, the grass is far less dense and healthy.  Neither patch has received fertilizer - the truck would not have come quite this far up the hill - so the difference must be due to how it has been grazed. 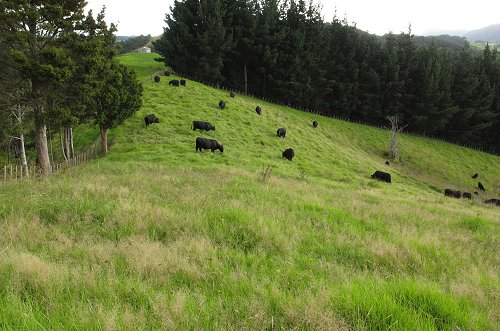 The fence against the pine trees, and the new fence running along the left side of the picture, are our boundaries up on the hill, which you'll often see in my pictures from down on the flats.  The dead (Totara) tree in the centre right, is where a spring erupts from the hill and it was the wetness which appeared to kill the tree a few years ago.  That water runs down the hill to form the gully below, which appears in Tuesday's picture above. 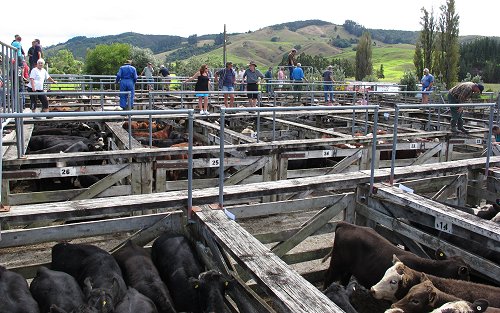 Peria Saleyards held its annual Weaner Fair today.  I wasn't selling or buying, but there to help someone else select some appropriate stock.  I had a great time, bowling up to agents and asking questions; something I don't usually do since I'm never there to buy for myself. 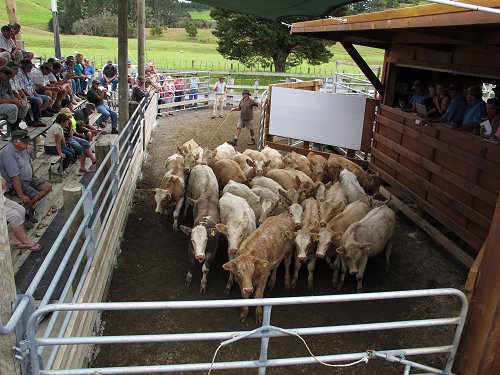 Things have changed quite a bit since I was last there for a sale, with the installation of a weighing platform and auction area with covered podium for auctioneers and agents, and tiered seating under a shade sail on the other side of the animal pen. 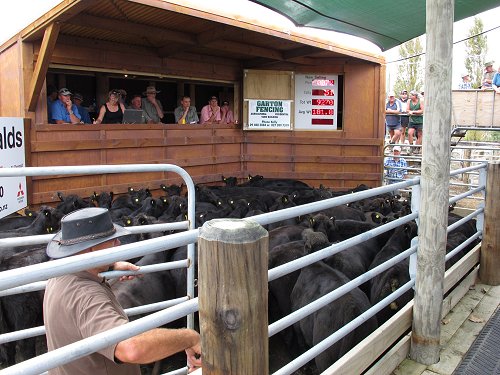 The cattle are weighed while the previous pen's occupants are being sold.  When their turn comes, their weight data (number of animals, total weight of the mob, average individual weight) appears on the display and the auction begins.  If you take a calculator or are quick at maths, you can work out the per kg price being paid.  Generally steer calves made around $2.50/kg and heifers around $2.30.

Driving back from another appointment in Whangarei today, we were blissfully unaware of the latest horrible news until we received a phone call on our arrival at home and turned on the TV to watch the horrific coverage of the Tsunami in Japan!  What appalling scenes.

Having met with Jude and Roger and the children in Whangarei before we came home, who were on their way to Mokau down on the coast south of Russell, I was particularly concerned about the reported threat of a Tsunami travelling across the Pacific, which would reach our shores in the early hours of Saturday.  Jude and Roger's bach is not far above sea level.