The Women's Studies Association conference ended at about 4 o'clock this afternoon and I enjoyed it enormously!

Afterwards I headed back to Jude and Roger's place in Grey Lynn, loaded up the glass-house which Stephan had arranged to have and put Stella and all her gear in the ute and off we went, north.  The original plan had been to stop for the night in Whangarei with Jill and Bruce, but Topmilk's hopeless staff management meant that Stephan had to be at work in the morning, despite having previously arranged to have the day off, so I felt I needed to get home to check on the not-yet-calved cows before they were left alone on Monday.  We arrived home at 11pm and I did a quick check on the cows and went exhausted to bed!

I dropped Stephan in to work and did the usual morning checks before Stella and I went off for the year's last Women in Agribusiness day in Ohaeawai, an hour south of here, past which we'd travelled at 10 o'clock last night! 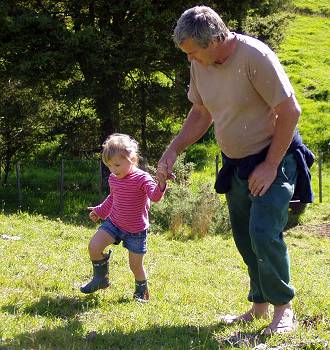 Arriving home in the afternoon, we went for a walk to check on the cows - there were some calves calling over the road in a fairly insistent way this morning, so I wanted to ensure all was well... 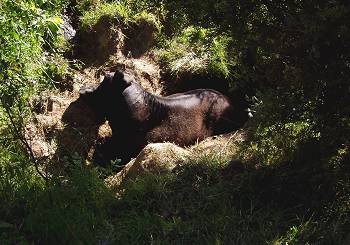 ... but it wasn't.  My ever-feared nightmare in farming: a stuck cow.  I knew from the marks Stephan had made in my notebook that he hadn't seen #410 on his check yesterday and he said he also hadn't checked them on Friday or Saturday as I'd asked, so when I found it was her calf calling so loudly, I began to fear the worst.  Heading over to the gully which runs down the western side of the paddock, I smelt 410 before we saw her!  But she was alive and appeared in reasonable condition still, so Stephan went off to get ropes and straps and help and I walked with Stella back home, to ask Jane if she would kindly look after her for the rest of the evening while we did what we could for the cow. 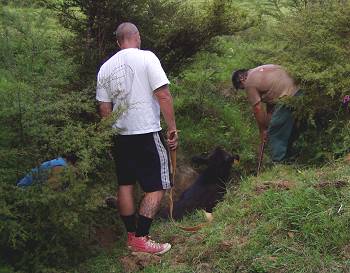 William and Lisa from next door were there with Stephan by the time I arrived back up the hill with a Ketol drench (to try and help normalise 410's metabolism which was doubtless dreadfully disturbed).  Over the next three hours we dug, winched, pushed, pulled, and eventually got 410's back legs up out of the hole into which she'd fallen and packed earth under her so she was able to lie normally and rest.  By that time it was dusk, so we decided we would have to leave the cow as comfortable as possible for the night, under a blanket to help conserve her body heat, and reassess the situation in the morning, with an eye to seeing if there was any way to safely get the tractor to the area to assist in the rescue. 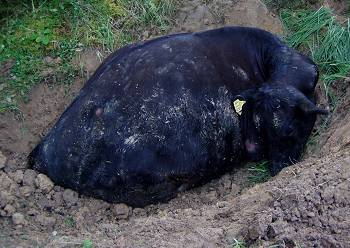 We climbed the hill again just after dawn this morning, to discover that 410 had remained entirely as we'd left her last night, her blanket unmoved, and died.

I am also resigned to the fact that cows will get into trouble from time to time unless one lives with them as a constant shepherd, which is not a realistic option.  For all I know she might have fallen in the hole just after a check on Saturday, had one been done, and thus been in this situation anyway.

In retrospect I thought about the smell I caught when coming over the hill - the beginnings of decay, but not quite the same as that of a dead creature.  I have smelt it before, when I found #25, a red and white cow here when I first arrived, who fell into the river at the back of the farm and wasn't found for a couple of days and subsequently died, despite rescue.  I suspect it may well indicate that the stuck animal has been so for too long and that the most humane thing to do may be to shoot it before trying to get the carcase out of wherever it's stuck.

410 had appeared to be doing all the right things, didn't seem to be terribly dehydrated or in enormous distress, but her breathing became fast and laboured at times during our work to free her and by the time we left her just before dark, I wasn't sure how she would be when we next saw her, but I didn't really expect her to die.  Presumably the shock of releasing her legs, on top of however long she'd been stuck with her back end so much lower than her front, was all too much for her body to cope with.

410 was one of the lovely first-calving three-year-olds, a daughter of Quadrille and 349.  Her calf was growing tremendously and looking fantastic and even though he hasn't had a milk feed for a number of days, still looks great!  410 deserted her calf at birth (7 October) and has now ended up leaving him again.

We took the cattle out of the paddock and back across to the rest of the farm, via the yards so I could draft Sybil (who has yet to calve) and the orphan calf out of the mob.  I'm not yet sure what we'll do about the orphan, but a chat with a vet suggests that he should survive without further feeding, although he'll suffer a severe growth check.

I also contacted the Regional Council with regard to our options and responsibilities in disposing of the cow.  Because she is not in a running water-course (the spring which feeds that gully is almost dry and will remain so throughout the summer) we may leave her there until her bulk is reduced by the activities of the insects which will now colonise her body.  It'll be a smelly job, but we'll go and clean up what's left sometime in the late summer.  One is not obliged to bury dead animals as long as they are not in waterways, do not create an odour nuisance for neighbours, and will not be accessed by dogs.  It would be quite difficult to get the tractor to the area and risky to machine and operator to try and drag the cow out of the gully and away up the steep hill - if even possible.  I shall keep an eye on the situation and make sure that we clean everything out of the gully before the rains start again in the autumn.

Ronnie, who lives about 21km away at Fairburns, borrowed our cow-sling a few weeks ago and I rang her the other evening to ask her to return it in case we needed it for 410.  That not being an urgent need any more, Ronnie decided she'd bring it back anyway, along with a 20 litre bucket of milk from her few milking cows, so we could try feeding the orphan calf.  I've just been watching him for the last couple of days to see how he would fare on his own, but I really don't think he's eating enough grass yet to do very well at all, so we'll see how we go with trying to get him to take a bottle.

Late this afternoon we walked him and 348, one of the two remaining uncalved cows, in to the yards and wrestled him into a corner in the race and gave him a bottle of milk.  I think most of it went in, although he showed no sign of actively sucking until the last little bit at the end. 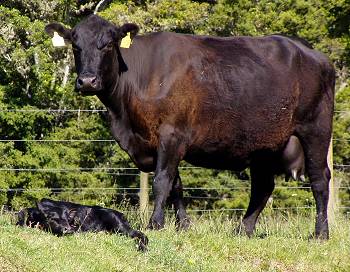 At my last check on the cows last night at 11 o'clock, Sybil was in labour.  Remembering how she disliked my observing her last year, I decided there was little point in hanging around, so went to bed.  When I was woken at 1.45am by a calling cow (whose calf had gone through a fence further out on the farm) and went to find out what was wrong, I saw that Sybil had a little companion, with reassuringly reflective eyes in my torchlight, so just left them alone for the rest of the night.

The calf is another bull, which will be Sybil's last since she's losing too many teeth and requiring rather too much extra care during the winter.  It would have been nice to have a heifer from her, but that is not to be.

Stella and I walked 348 (who may very well be about to calve today) and the orphan calf in to the yards again and this time the calf actively sucked the bottle for most of the time, so I think we may well get him to feed.  He's significantly larger than when I carried him down the paddock as a new-born calf!  I wonder if he remembers me? 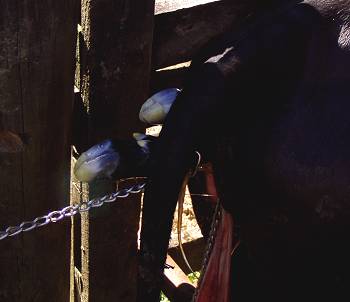 As if this week hadn't already been quite traumatic enough!

Stella and I went out and sat in the paddock this afternoon when 348 began her labour.  We watched for about 20 minutes and finally a bag with feet appeared and after a couple of pushes, I realised that they really were upside down!  For goodness' sake!  Isn't one breech presentation in a year quite enough?  Alert readers will know that it was this cow, 348, which produced the Backward Baby (beautiful 418) three years ago when she first calved as a two-year-old.

We walked 348, the orphan, Sybil and her calf in to the yards, after I called the vet in Kaitaia.  Greg came out and efficiently delivered the live heifer calf. 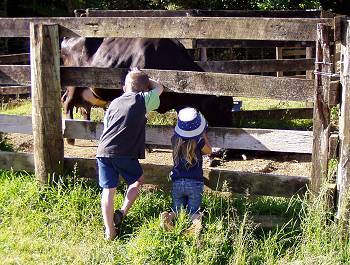 Stella and Greg's son, Craig, watched the whole process with great interest, wanting to get right in the thick of everything - we non-parents sometimes forget to make sure that everyone is where they ought to be - Craig running off into the middle of a pen to try to make friends with the very unwilling orphan calf at one point and Stella climbing over the rails to get in for a close look at the calf!

348 received a shot of oxytocin to get her uterus contracting to expel the afterbirth, (which she did within the next hour or so) and then we let her out the end of the race and around to where Greg had placed the calf.

So that's calving finished for the year.  It has been a rather unusually stretched out period, taking ten weeks from the first to the last of them, although the first ones were born almost a week earlier than expected and these last two were over a week later than the last two born, so perhaps we could just consider them outliers, statistically speaking, and say that the calving period really was much shorter!  The cows are mostly in excellent condition, so hopefully I'll be able to drag them back together again for next year.

For the first time in several years we've reached the end of calving without losing a single calf, although the sense of celebration which ought to go with that is rather deflated by the loss of 410 this week.  And I don't really consider them safely out of the woods until the last of them gets past about six weeks, which is the period during which most of the fatal accidents occur.