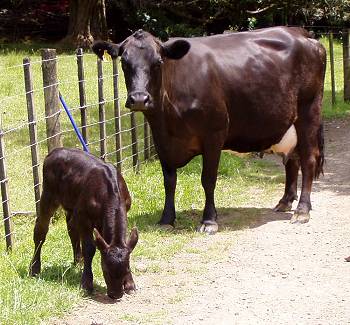 348's latest backwards calf was up on her feet before dark last evening.  I left the two cows and calves in the driveway near the yards so they'd be reasonably near the orphan calf, which I left in the yards for the night so he'd be easy to get in for his feed in the morning. 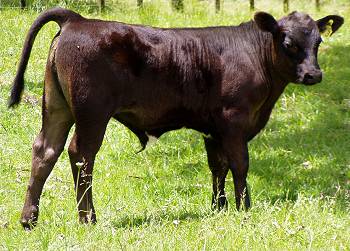 493, the orphan calf, is a lovely looking animal, but I suspect he won't look quite so good without unlimited access to milk over the next few months. 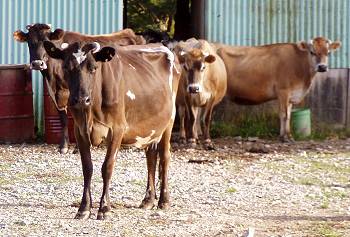 Early this morning I drove 21km to Ronnie's place at Fairburns to collect another 20 litres of milk from her cows.  Ronnie milks her few cows and raises calves and pigs on the milk - fortunately she has a surplus at the moment.  We figured that giving the calf whole milk would be the best thing to begin with - and prevented our having to buy a 20kg bag of milk powder which, if the calf wouldn't take a bottle, would then be wasted.  We'll buy some powder this week, since the calf is feeding well, and gradually change him over to that milk. 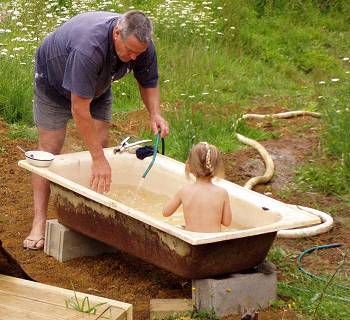 Stella likes to have a bath at home, so we promised her we'd do what was necessary for her to have one here during her stay.

During the afternoon Stephan filled up the 200 litre drum (about 44 gallons) with cold water and lit a fire beneath it and three or four hours later the water was very hot and Stella could have her bath - filled right to the top!  And there were strawberries and ice-cream for pudding while she was in there!

I managed to feed the orphan calf in one of the larger yard pens this morning, gradually approaching him with the bottle, until he tentatively reached forward to take the teat.  Having achieved that, I decided I'd risk letting him go back to the house paddock with the cows, since they needed to move out of the driveway, where they'd eaten most of the grass.  In the evening the calf approached his bottle quite easily and so feeding is now much simpler!  If I'd had to walk him into the yards for every feed, his milk-suckling future would have been rather short!

I brought Isla's mob of cows and calves in to the yards this afternoon for calf weighing - the second time for some and the first for those born in that paddock.  I've decided I will buy some cricket shin pads!  Some of the calves, when confined in the yards, will kick straight backwards at speed and whilst I've not been badly hurt by a calf yet, I can see the potential for injury and having rather difficult feet, necessitating the use of my "mobility scooter" to get around, the last thing I need is a disabled knee as well!  When weighing and dealing with the little calves in the yards, up until they're about three months old, one needs to get in with them to get them to go where required.  They're only about 70cm/28 inches tall, so come up to about half-way up my thighs.  If one keeps really close to them, kicks don't have too much speed and force, but I've narrowly missed being clouted on a number of occasions when there's been a bit of distance between one of them and me. 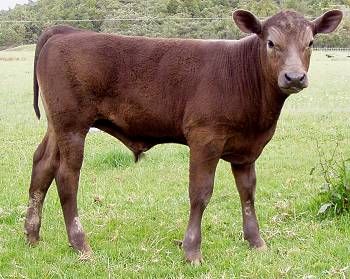 I noticed yesterday that Fuzzy 357's calf is going bald over his shoulders and around his face!  I'd found some information on the condition I suspect they carry some time ago, so went searching for it again on the internet.  I also contacted Massey University's Animal Science department to find out if they could provide any information.

He has a condition commonly called rat-tail which results from the interaction of a couple of sets of genes, and from my calculation will result in half her calves having the condition.  I sold her normal-looking heifer calf last year - perhaps I ought to have kept her, since I realise I've only a 25% chance of producing another normal heifer.

Those odds are a bit too long, and I am concerned that in a pen full of beautifully grown, black steer calves, calves like this will stand out in an uncomplimentary way and downgrade the price I might expect to get at the saleyards at the weaner fair, so Fuzzy, for all that she's a lovely animal, will have to go.  The rat-tail cattle, in northland where the weather never gets terribly cold, do just as well as the others - in colder climes, the lack of insulating coat hair means they often don't maintain their condition during the winter months, nor grow quite as well at those times as other cattle. 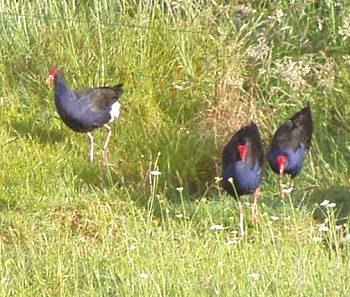 An attempt at long-distance nature photography!  There has been a great deal of fuss at the bottom of the garden this morning, as this group of Pukeko try to sort out some sort of disagreement.  I have no idea what's going on - whether they're all one family group, or perhaps two lots which have drifted a bit too close to each other.  There were about seven or eight of them chasing each other about and having face-to-face flapping confrontations and when they weren't doing that, it was flicking tails and white-feathered bottoms all around!

A couple of weeks ago I decided we had better have some lime for our soils.  Our pH is a bit below optimum and I haven't put lime on for a few years, since we've been using RPR, which has a slight liming effect anyway and will have kept the soils reasonably sweet.  Lately I've noticed the presence of a number of plant species and mosses in some of the paddocks, which indicate that the pH has dropped a little too much. 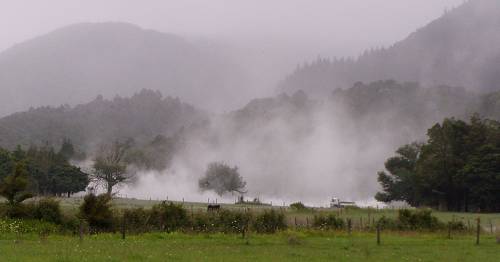 Ryan phoned last night and said that if the weather was good this morning, he'd be round with the truck and the first load early this morning.  The air was reasonably still and it looked like it might rain at any minute, but there was only a little light drizzle, so we were able to get four loads on, covering most of the flats.  My priority paddocks were those I'll use for insemination this year, since I need good growth in those for the mob which will stay on the flats during mating.  There's a lot of lime dust rising in the picture, but the rest of the mist is the extraordinary low cloud which has been hanging around for the last couple of days.