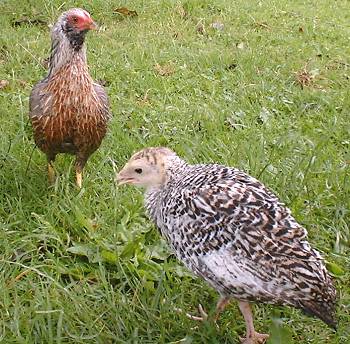 Here's the turkey chick, now almost as big as its foster mother!  It still follows us around peeping constantly. 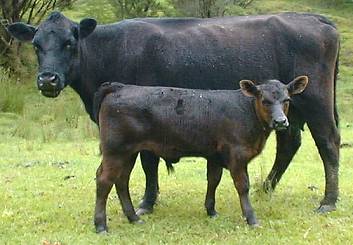 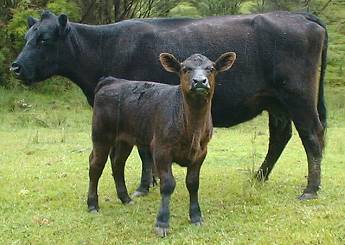 Isla and her calf have been out at the back of the farm for a little while, along with Abigail, Onix, 348 and another five cows and their calves.  Isla is looking pretty light again, but is holding her condition and her calf is certainly growing very well.  I spent some time grooming Isla and then Abigail the other day and contemplated some research and theory recently proposed by a local scientist working with another in the UK.  The book, written by Professor Peter Gluckman from the Liggins Institute in Auckland and Professor Mark Hanson of the Centre for Developmental Origins of Health and Disease in Southampton, proposes that a fetus makes "predictive adaptive responses" in its development, to prepare it for life in the environment in which its mother lives in terms of its future nutritional environment.  In terms of humans, the suggestion is that many people (in the western world in particular) now live in a world full of foods of such different quality from that of their parents' world, that heart disease and the problems associated with obesity are alarmingly increasing.  I pondered the theory in terms of how cattle which are born into a particular environment seem to do better throughout their lives than those which arrive from elsewhere where the quality of the feed may be quite different.  Much of the adaptation which occurs when a ruminant animal moves from one environment to another is to do with the change in the makeup of the micro-organisms which populate the rumen and enable processing of the grasses eaten by the animal, but I wonder how much effect the fetal predictive adaptive response might also have in enabling those animals born on a farm to do better than others brought in from other places.  "I have a theory" has become my phrase of the month.  This could, of course, be a case of a little knowledge being a dangerous thing!

Tuesday the 7th of December 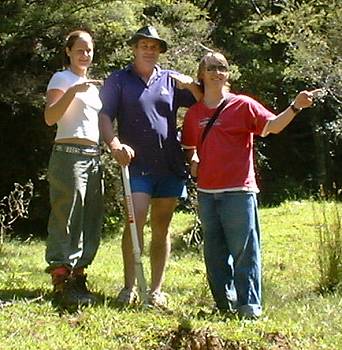 We had lots of visitors today!  A woman who lived near Stephan's family (he was about six years old at the time) in Brecon, Wales, came with Muriel; nephew David and Kelly came too.  Stephan made lunch and then we left Muriel resting while the rest of us went walking.  David and Kelly joined Stephan in a walk up to the waterfall high in the bush behind our property and Libby and I went walking amongst the cows.  It's such a pleasure to have guests who like cattle and are interested in their breeding and conformation!

We've been selling off ewes and lambs all over the place.  Lynn and Kees have decided they'd like to repopulate again, after their sheep flock was decimated by dog attacks a couple of months ago (during which the ram they bought from us perished), so we've sold them the three three-year-old ewes which had twins.

I listed the four- and five-year-old ewes with twins on www.trademe.co.nz, the local auction site and sold them to a woman near Auckland, and we agreed to transport them down to her.  We also offered to shear them first, since they'll be going to a property with rather overgrown pastures and the risk of flystrike increases in damp and warm conditions in long grass!  Stephan shore the six ewes and twelve lambs which are to go to Auckland. 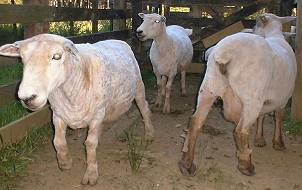 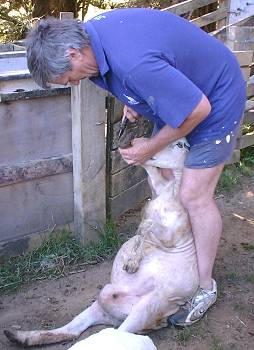 Since we'd left the sheep in the driveway overnight to tidy things up a bit, we popped them back into the yards this morning to trim the feet of those ewes going to Auckland.

The fertilizer spreading man came out with four tonnes of the RPR we ordered the other day and we spent a couple of hours going around putting some on the paddocks, but soon gave up because it was simply too windy.  I'm not too happy watching clouds of expensive dust flying off into the sky!  We'll get him to come back with a couple of larger loads when the weather settles down a bit.

Once the fertilizer man had left, we brought the three bulls in to the yards and Stephan expertly took a couple of tubes of blood from Crispin.  Stephan, in a year in the distant past, spent a season working as a Brucellosis Testing Assistant with the Ministry of Agriculture and Fisheries, which involved taking blood samples from every animal in the district.  Fortunately it is a skill he has not lost and it has come in handy a couple of times when we would otherwise have had to get the vet to visit and collect samples.  We are testing Crispin for BVD (Bovine Viral Diarrhoea) because we may lend him to Lynn and Kees for use over some heifers and wanted to know what his status was before he left.  It's a complicated disease which would cause all sorts of problems if the heifers didn't have it and Crispin was infectious although I'm not sure what would happen if he caught it from them whilst in service.  I used to think I understood the workings of BVD, but it has different effects, dependant on when and how an animal is infected.  I had the camera, but was so involved in being worried about what Stephan was doing (I must learn to relax!) that I forgot to get it out.  As it was, I had to move pretty quickly to retrieve a dropped glass tube before Crispin stepped back and crushed it, so it was probably fortunate my mind was completely on the job at hand! 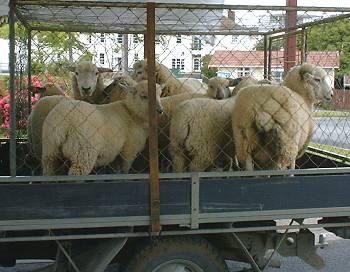 We then popped Lynn's sheep onto the back of the ute to take them to their new home.  It always amuses me to see our animals in places they don't usually appear, like here, in front of the Kaitaia Hospital where they waited while I dropped something off there.  Naturally a couple of wits made helpful comments about their being at the wrong place for treatment, so we then parked outside the vet's while we dropped off the bull blood.

When we arrived at Lynn and Kees's place, we backed up to the appropriate gateway and the sheep jumped off and ran off into the lush long grass awaiting them, appearing to be quite content to have shifted home. 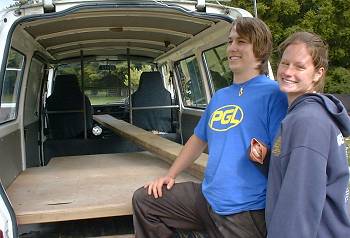 Uncle Stephan helped David and Kelly build a platform in the back of their van, upon which they could place a mattress and also have storage space beneath.  They're off to do some travelling around the country over the next few months, since this is Kelly's first visit to Aotearoa from England.