Having received a call from the trucking company to say that the hoggets could go off to the works on Wednesday morning, we brought them into the yards to check their teeth again.  Two weeks have passed since Anthony checked them and since they're just over a year old, we knew some would have cut their teeth and therefore be no longer eligible to go off as lambs. 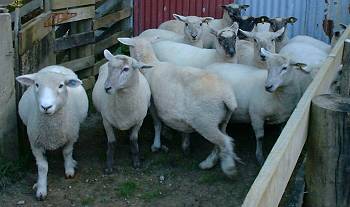 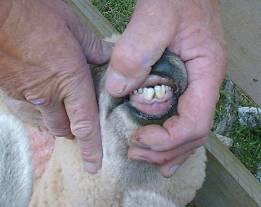 Of the 14 we marked last time, three had cut their first adult teeth.  I had given some thought to keeping Dotty, since she's remained a tame animal and has grown quite well, so she's staying anyway.  Bendy's teeth had come through, so he'll have to stay just a bit longer, along with the other two which will become homekill lamb/mutton instead.  I said goodbye to Tabitha, who ignored me and ran away. 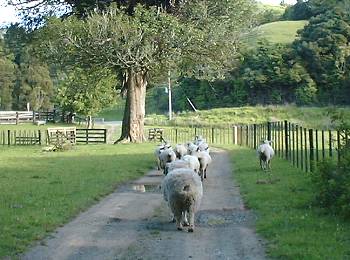 We put the half of the mob to remain on the farm in the paddock next to the yards and the half which were to go on the truck in the yards for the night.  I didn't want to separate them by too much distance in case any of them escaped in an attempt to rejoin the other part of the flock!

Wednesday the 1st of December

The lambs went off on the truck as planned, so that's 11 less on the farm!

We went out!  It's December, so we've a few social events to attend, for a change.  This one was only a pseudo-social event, since it was an evening arranged by an insurance company to meet and greet their clients.  The guest speaker for the evening was David Fagan, champion sheep-shearer, who entertainingly recounted a number of his experiences as a competitive and commercial shearer around the world.  There were a few spot-prize draws during the evening and we won dinner for two out at the Carrington Club on the Karikari Peninsula, operated by fellow Angus-breeder Bob Haig.  We've been there for lunch once, for Muriel's 80th birthday and on that occasion it was certainly not deserving of a good review!  However I saw it was recently very favourably reviewed in the North & South magazine, so we shall look forward to experiencing an improvement! 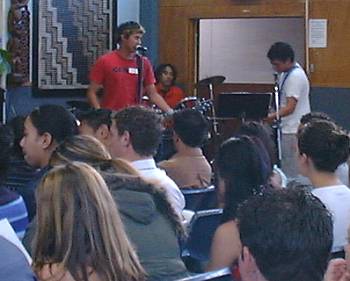 The Senior Prizegiving for Kaitaia College was held this evening, so we went to watch Favourite Niece Amanda (to keep myself out of trouble I must also mention that this does not preclude the existence of Favourite Niece Stella and Sarah and Miriam...) receive all sorts of awards for her outstanding contributions to College life and for her own splendid achievements.

As people were arriving, entertainment was provided by Kaitaia's famous "Outatune": Evan Ashley, Painia Huru and Raymond Rice, who have been together for some time now, and regularly compete and have some success in national competitions to find the best new rock band around.  They are a nice tight group with much more tonal and rhythmic sense than I've heard in some inexplicably successful bands in pubs around Auckland! 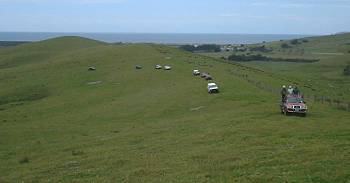 Stephan being on holiday for a couple of weeks, we were able to go to the Far North Monitor Farm's final meeting for the year, near Taipa.  The property boasts some spectacularly wide views out across Doubtless Bay - although this isn't actually the best shot to demonstrate that!  Anyone with a 4-wheel-drive ute took as many people on the back as would fit and we went off around the farm to see recent progress. 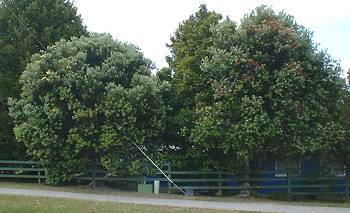 At the end of the day we went off with Jeff, who bought our bulls this year, to join him and Helen for dinner at their place in Otongaroa.  We stopped briefly at Coopers Beach, where I spotted this pair of Pohutukawa trees (the two trees in the foreground): the one on the left has yellow flowers and that on the right has the usual crimson, although neither is in full bloom yet.  They're growing outside the house in which I spent my early childhood, at Motel Pamir.  My mother tells me that the yellow flowered tree was bought by my father from a nursery in Whangarei about 39 years ago!  I took a couple of pieces off it to attempt propagation.

We passed this wonderful formation: Taratara.  It's a landmark which is part of my forever.  Because we lived at Coopers Beach and then Cable Bay during my childhood, whenever we went anywhere south we'd pass Taratara.  My mother bought a picture painted by Neva Clarke at some time in the 1970s, so it's been in our house for a lot of my life as well.  My brother, Bruce, apparently abseiled down it at some time.  There are many similar formations around the whole Whangaroa Harbour area.