Just on dark this evening, 350 went into labour and I watched, ate some dinner, dashed out to check, ate some more dinner - Stephan doesn't always gain my full attention and appreciation for his fine culinary efforts.  The calf was born, a heifer, just after 8.30pm.  Meanwhile, sometime just before the light started to fade, around 8pm, Ranu popped out a tiny red bubble of birth membranes ... and then nothing else happened, except she kept wandering around the paddock, bellowing.  Because she had at no time made any effort to lie down and get on with birthing the calf, and as she was not in any other obvious birth discomfort, I just left her to it, popping out for a look every 20 minutes or so.  At about 10.30pm I set up the yards ready to take her in for some investigation.  As soon as I opened the gate, she was off and out to the yards, on her own.  I don't know what that was about.  I eventually coaxed Isis into going out to keep her company, for although Ranu was keen to get out there, I doubted she'd be as calm on her own as I donned a glove and added to her physical discomfort.

I did an internal examination at around 11pm and all was where it should have been: two front feet and a little head, but she just wasn't getting on with things.  I wasn't sure if the calf was still alright or not, but I didn't have any distinct impression of it not being, so decided to leave well enough alone for a while longer, in the hope that the interference might prompt some activity.  It didn't obviously do so.

I let Stephan go back to bed while I left Ranu and Isis in our grassy yard and I continued to check every half hour or so.  Eventually Ranu appeared to be making some actual effort to birth the calf!  Still she took an exceptionally long time to get the feet out where I could see them, but once the head began to appear, things happened very quickly and suddenly there was a calf, at about 1.45am.  She was born in a fluid-filled bag and Ranu started licking from the back end, so I dashed in and whipped the membranes off the calf's head.  Ranu was much calmer about all this than the other two new cows!

The calf was fine, a heifer, and soon up on her feet for her first feed.  I went, gratefully, off to bed, half expecting to find Isis with a calf as well, by dawn. 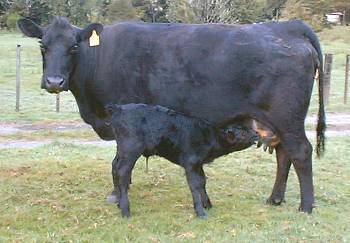 At 6.30 this morning things were looking fine.  I was suddenly taken by the utter beauty of Ranu's eyes, and realised what a difference a thickly curled set of eyelashes can make to eyes and face.  Perhaps that explains why some people spend fortunes in their lifetimes on cosmetics.  I'll just continue to enjoy them from behind my unencumbered lids on the faces of other creatures. 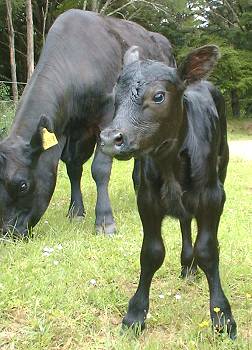 Funny to think I met this calf with my fingers, before she was born, in the middle of last night. 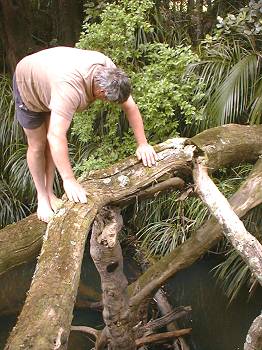 Looking out the kitchen window this afternoon, I saw Ms Duck's parents approaching the house with three brand-new ducklings.  We went out to have a look, but they very quickly turned around and headed off again, as fast as they could.

We went over to the river bank to check under the enormous tree in which they nest, to see if there were any lost babies in need of our assistance.  Despite clambering out over the river to check along the bank, we could neither see nor hear any characteristic Putangitangi duckling chirrupping. 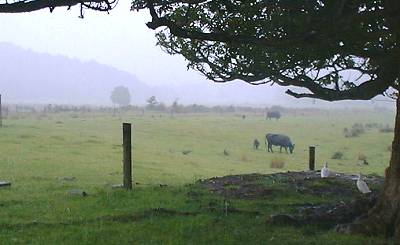 After ten days of lovely dry, warm weather, some rain again - falling very heavily for a while! 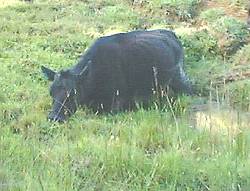 Who else but 99?  I wonder if 99 will ever get into a bog from which she finds she is unable to extricate herself?  Up to her leg-pits as usual in the swamp. 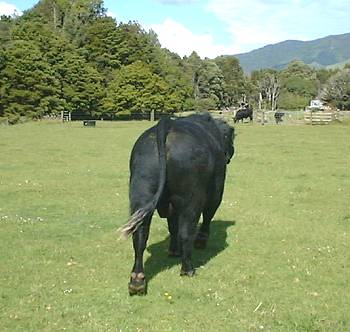 This is almost as much fun as taking 20 animals on a walk from one paddock to another through the bush.  (Really!  That's like taking your dog out, but 400 times better in terms of biomass.)

I needed to move the bulls out of this paddock so I could put some cows into the neighbouring one and Quadrille was at the other end of the paddock, so I had to go and get him.  He growls fiercely all the way, but otherwise does as I wish and sensibly goes through gates.  I'm careful around him, but he's never yet shown any sign of ill-humour toward me.

Conveniently, at about 7pm this evening with an hour and a half of daylight left, Isis finally started her labour.  I've been nervously waiting for this for the whole season, having watched her give birth to her dead baby last year.  Stephan and I stood near her while she paced around.  I happened to have the telephone with me and received a call from an internet friend just on dark, so had a nice conversation while I wandered around the paddock with Isis, waiting for her to get on with the birth.  The calf was eventually born at around 9.30pm and was worryingly slow to start breathing, so I did a bit of brisk rubbing and chest slapping to help get her going.  I'm not entirely sure if anything was really wrong - it may only have been my paranoia, of course, since I couldn't have borne seeing Isis have another fruitless year.

This morning's first job was to weigh the new calf and her paddock-mates.  Isis's heifer weighed just over 40kg.

With the cows all safely calved, I was able to get away on a planned short trip to Auckland.