I am still waiting for the last three cows to calve.  It is now six weeks since the first calf was born this season, so I would have liked to see all the calves on the ground by now.  I knew that Isis would probably be late, after her uterine infection last year as a result of having a dead calf, but the other two were not expected to be still hanging on!  Ranu, one of the three stud cows I bought last year, didn't get pregnant until her third insemination, which I suspect might have more to do with a particular batch of semen rather than my technique or timing.  Despite the short-gestation EBV of the sire I used over her, she's holding on into the late end of her gestation period!  350 is the other late one and I'm not sure why she is so.  Perhaps she had problems I wasn't aware of last year and so was delayed in conceiving again. 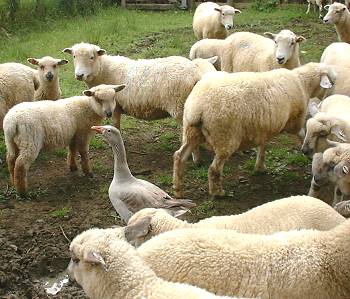 Special Agent Anthony came out here today to feel up our hoggets!  We also got the ewes and lambs in for him to see, so we could discuss how best we might go about selling them.  Spot the impostor!

As far as the meat works are concerned, a lamb retains that qualification until it starts cutting its first adult teeth, so our hoggets, despite their being over a year old, are still "lambs".  We'll receive less per kilogram for them than if they were smaller and younger, but there is more of each of them, to make up for that.  After much thought, Bendy and Tabitha have been included on the list of those animals to go.  Bendy has been causing problems with his complete lack of respect for any fence on the farm!  Tabitha is not a sheep I would keep for breeding due to her inability to thrive; keeping her for sentimental reasons is tempting but we need to reduce our sheep numbers, not find reasons for not doing so! 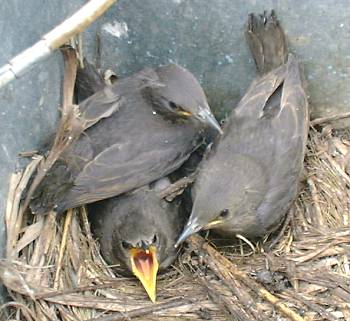 The starlings are off!  I opened the top of the mailbox to take a photograph and one of them flew out.  By the time I closed it again, there was only one left in there - the others were perching in the trees nearby, where their parents would find and continue to feed them. 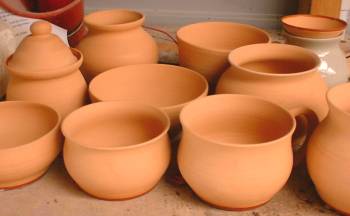 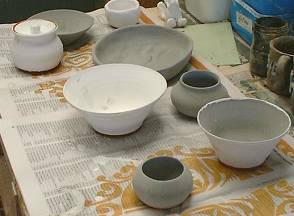 I went to town to pretend to be a potter again.  For various reasons, including some house renovation work we needed to do, I've not done any pottery for months.  My pots have been bisque fired and were awaiting glazing, gathering dust on the shelf at the Arts Centre.  Under supervision, I applied glaze to some of them and left them to be kiln-fired again during the next week.