During the weekend we went to visit some friends, so Stephan could help shear some of their sheep and we could have a long-overdue friendly visit.  While the blokes were working, Lynn and I drove around their farm having a look at the cattle and horses.

Lynn used to be a potter and still had her potting wheel tucked away in the corner of one of the hay sheds, so we dragged it out and took it back to the house and she and I had a bit of a play with it.  Lynn very kindly offered to lend me the wheel (and even provided some clay to start me off), although I wondered if she was about to withdraw the offer as soon as she got her hands on some clay and started working!

The wheel has got as far as just inside the house and it's set up and ready to go.  I've been practising by throwing pots on the wheel, then cutting them through to see how my technique is progressing. 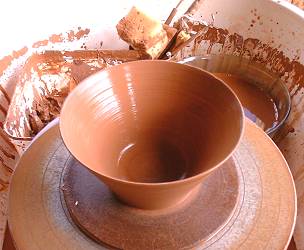 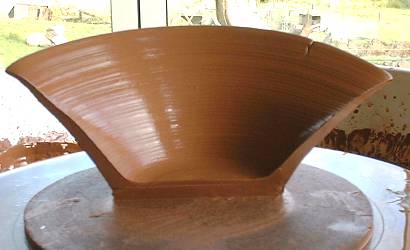 My pottery "guide" tells me she's surprised at my early ability, so with a bit of practise, I think this might be something I will very much enjoy doing. 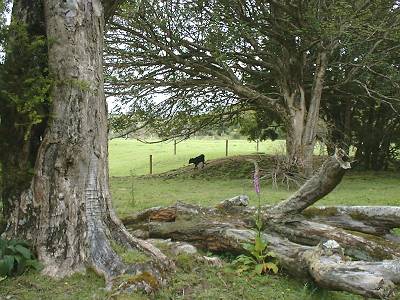 Calves, who'd have them?  A single calf finally finds her way to the gate, after nearly all the others have left the paddock. 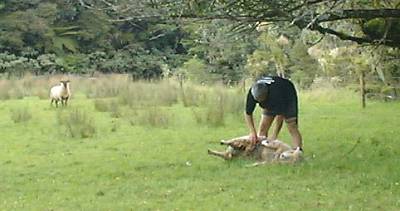 Damian has been lying down whenever we've seen him lately, so we thought we'd better check to make sure there was nothing obviously wrong with him, like being besieged by flies and eaten by maggots.  He seemed fine.  He's getting on a bit and would probably feel better if he didn't have as much wool on him. 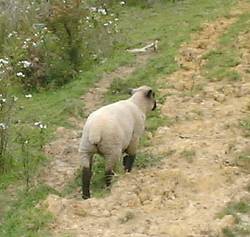 Bendy suddenly decided to join me for a walk today, out to the back of the farm.  He was distinctly unhappy about crossing the streams and made huge leaps from one bank to another where he could, or otherwise bounced his way across, getting his feet in the water as few times as possible.

The four bulls, just after a move to a fresh paddock.  They are, from left to right, Crispin, Quadrille, Bernard and Lendrich.
As you might see, being moved is really more a change of scene, still, than the provision of a lot of feed.

The rejected bull calf is completely relying on Isis for his milk needs now, and she appears quite content with that arrangement.  Flower continued to run away from and kick or bunt the calf whenever he attempted to feed, so with a final frustrated reprimand to Flower, I gave up. 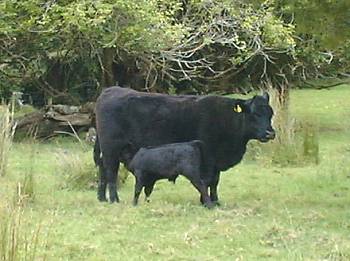 Off to my pottery class again today, taking the bowls I didn't chop into bits.  My pottery guide wasn't there today, so I picked up some clay and the fired dishes I'd made at the weekend workshop, and came home again.

To the weekend pottery class, I had taken some bits of what I thought were clay pebbles from our river and we put one in the kiln with the pottery, to see what happened.  It melted into the most beautiful dark brown shiny mass, which could presumably be used to make a glaze - I don't know much about that side of the process yet. 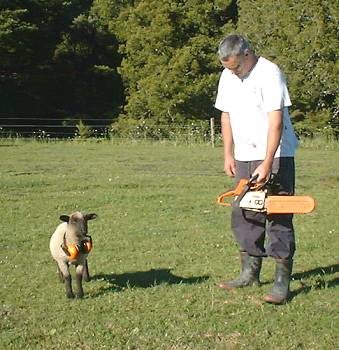 Late this afternoon, I headed off to the river where I'd found those coloured pebbles and Stephan and Bendy came too.  Stephan thought he'd go and find some more prospective turning wood and Bendy carried his ear-muffs.  We weren't quite sure that Bendy wasn't going to turn around and run home after we put the muffs over him, but he settled down and just trotted along with us.  Perhaps I could train him to be a helpful carrier-sheep.

Again, he had a few problems with rivers - running up and down on the wrong side (the one I was no longer on), trying to work out how to get across. 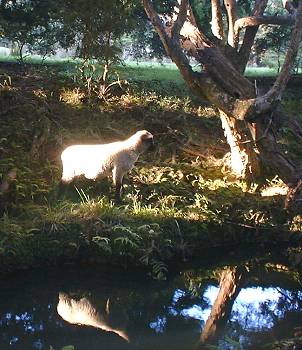 I had to be a bit careful that I didn't go too far away when I thought Bendy might be inclined to attempt a jump over too wide a piece of river - he might very well be ok if he did, but his front legs are not normal and I didn't want him to hurt himself by landing badly.

Our set of six Muscovy ducklings is still complete, in spite of their habit of ranging far out onto the paddocks in easy reach of any passing hawks.  Some of them are quite quiet and will approach us to be hand-fed.