Last night, when I drove Stephan's mother, Muriel, back to her home, I spotted a dog on the side of the road, outside a house I knew didn't have a dog!  I stopped the ute (our small utility truck) and the dog jumped on the back, so I tied him on and we continued on our way.  This morning we had a closer look at him and discovered he has extraordinary eyes ... 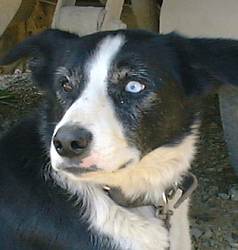 ... one brown, one blue, and that he had stitches from a very recent neutering operation.  I phoned the local vet clinics and we worked out which dog this was - Patch is his name - and I telephoned his owners, who came to pick him up.
He has a bad habit of wandering off, so the neutering was an attempt to reduce that urge, although the vet thought that might not be very effective at his age - about seven years old.  He was a lovely quiet dog, didn't dash up and lick me (which I loathe), nor did he bark until the peacock walked past him this morning. 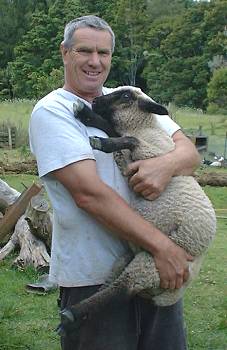 Bendy still isn't a big sheep, but he's a lot bigger than that little thing we carried out to the back of the farm a couple of months ago.  He's quite affectionate, even when I'm not holding the feeding bottle and follows me around just for a scratch around his face.  Tabitha and Dotty spend most of their time tied to fence posts and Bendy just grazes near them, although I've been letting the three of them race off across the paddocks in the evenings this week and the two ewe lambs haven't been trying to escape into Jane's garden, so I might allow them a bit more freedom again.

Today I went to the Women in Agribusiness (previously Women in Farming) field-day near Okaihau, where we looked at the grading system meat companies use for beef cattle and how to determine when one's cattle are ready to go to the works for slaughter, along with all sorts of related questions from the forty or so women attending.

On the way home through the Mangamuka Gorge I stopped and took some photographs of the Kauri trees, which were planted some years ago to try and reinstate them in this area (there are a large number dotted through the Maungataniwha Range through which the gorge runs, but not in the sort of numbers they probably once were).  The trees looked beautiful, as their spring growth has sprouted at the ends of all the branches, which in the distance, made them look a bit like they had rings of decoration around them.  Unfortunately my camera is not advanced enough to really do them justice. 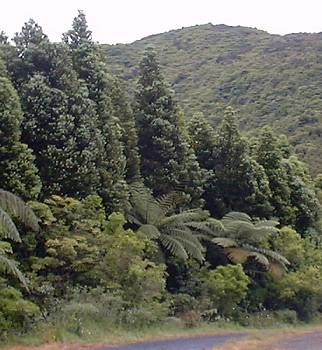 On my arrival home, I went to check on the cattle over the road, and while I was there, did the job which has been on my list of things-to-do for ages: I cleaned the trough! 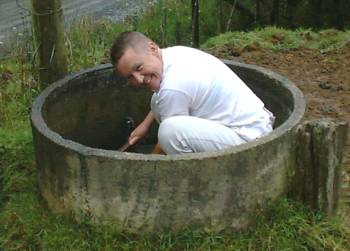 There was all sorts of stringy green algae growing in the water, along with an inch or more of scum at the bottom, collected there from the mouths and faces of drinking cattle, over the period since the trough was last cleaned (beyond my memory now).  Over the summer months, the water gets replaced more frequently as the cattle drink more than at other times, but the water is warmer too, which encourages faster growth of the things living in the water, so it was a good time to reduce the number of those things.

The rain has come, at last!  We've had about 70mm over the last three days, with which we're very happy.

Lenita, who is one of the seven children who live just down the road from our place, came to spend her days with me this week, while her mother and three older siblings spent the week with the children of a local school, on a trip to Auckland.  The children are all home-schooled, so their programme flexibly allows for interesting interludes, taking part in different forms of learning.  I still had things I needed to be quietly getting on with, so at one point, Lenita set off across the paddocks with some maize, to visit the sheep.  I watched her through the binoculars at one point, as she, in her lime green shirt, was mobbed by a sea of white sheep.

In my herd of cattle, there are some who become the first followers of my calls and leaders of the cows from one place to the next.  I've started noting which of them either turn up first, or actively follow me when I'm taking them from paddock to paddock. 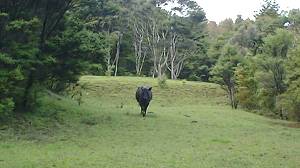 This is #350, who alone followed me from the hillside on which she and the others were grazing and sitting, around the hill and through the bush, to the new gateway to the next paddock.  The others eventually came around and made their way after her. 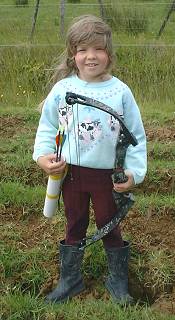 Lenita brought her bow and arrows with her today, so we went hunting for rabbits.  We only found one - I think one of us was talking rather too much as we walked and most of the rabbits decided to go elsewhere before we arrived in any clearing - and it ran off before Lenita could get close enough to take a shot at it.

We had a very nice walk through some patches of bush I've not visited for a while and talked about some of the trees we found.  I discovered a number of Puriri seedlings which are not often seen these days - with the number of opossums in the bush and anywhere the cattle can graze, they simply don't survive.  Since the big opossum poisoning operation in the area last summer, there is a noticeable increase in some of the seedlings on the forest floor.

Everywhere at the moment, the Cabbage Trees (Ti Kouka) are flowering.  The Cabbage Tree is a tree unique to Aotearoa and is a favourite of many New Zealanders. 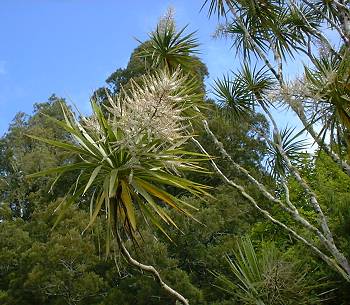 There was some fear for their survival over the last few years, but ours are extremely healthy, on the whole, and there are new ones sprouting up anywhere we've fenced the cattle out.  We found a multitude of small seedlings on the edge of our road a few weeks ago, germinated from seeds falling from some large trees on the river bank, but we didn't know the local council had just applied weed spray to the road side (we have asked them to desist, but they have, in their usual manner, ignored us) and they all then browned off and died in the pots in which I planted them.  This year, I shall attempt to gather some seed directly from the trees.

After weighing the rest of the calves the other day, we drafted #367 (who is #16's 2½ year old daughter) and her calf out of the paddock she had shared with Abigail, Flower and Isis, and into the larger mob.  Now there are three very closely related cows in this mob ...

Just before Lenita was due to be picked up, we went up the road and moved the young cattle from the hill paddock to the one between the road and the river.  They were all waiting by the gate when we arrived, so the job was done very quickly! 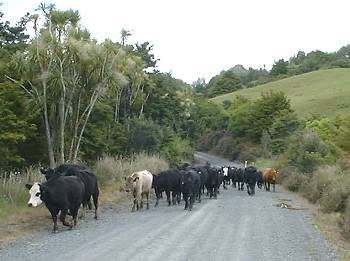 Then, because that move had been so easy, I decided we could get the cows and calves into the paddock next to the yards, in preparation for doing the tagging and castrations tomorrow.  Stephan and Lenita went up to open the gate and get the cows out of the paddock, but then the plan fell apart.  I had forgotten that #367 goes completely mad when she sees children, or even adults other than me, and she wasn't going anywhere near Stephan and Lenita.  Eventually the two of them came back home and we left the cows to settle down and make their own way down the lane.
I'm not sure what #367's problem is, she's never been subjected to any sort of trauma and is a fairly quiet animal generally speaking, but people she doesn't know really upset her, especially very short ones!