This evening was the opening night of Stephan's play, his first major role, in a one-act play by Bronwyn Elsmore called "Abandon Hope".  The play is set in the imaginary town of Ruawhetu, somewhere south of Auckland, in a bra factory which is about to be closed down. 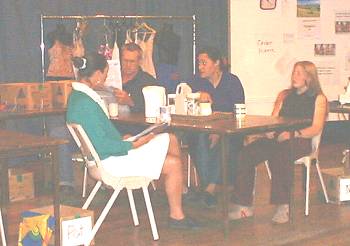 Stephan played a bloke named Dan Robinson, who was the packer/floor-hand in the factory.  The four actors on stage, and three or four back-stage helpers, all presented a polished performance, which they will repeat on Monday, Tuesday and Wednesday evenings.

Monday the 1st of December

The sheep have been just getting on with their own lives for a while, with the occasional check by us to make sure there's no sign of fly-strike.  This afternoon when I walked over to move them into a fresh paddock, I found Yvette in this sad predicament... 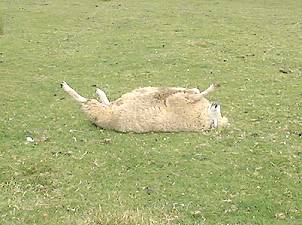 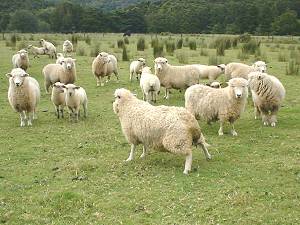 She had obviously been there for a while - possibly since the previous day - so she was pretty shaky when I helped her up on her feet again, but was soon able to make her way down the paddock to the gate.  She was a bit smelly from urine leakage into the wool on her rump, and the flies were pretty interested in her, but she had no fly eggs in her wool.  This is the same paddock in which one of the ewes was cast last summer, with even less wool on her, so the lumps and bumps in the ground here must be just the right shape to catch sheep.

The three bottle-fed lambs had followed me across the paddocks on my walk, so were running around amongst their siblings.  The three of them don't have quite the same "bloom" as some of the best lambs out there, but are much better than those few who are not being well fed by their mothers. 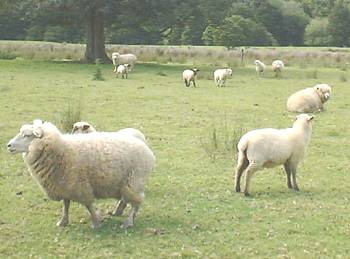 That's Bendy in the middle, looking towards the camera.

The man who brought the amazing singing Magpie to the A&P show last February phoned and asked if I had a spare rooster, since his had died, and asked if we'd like a drake.  What a perfect swap!  We swapped all our drakes a couple of years ago for some fish, so the ducks have been happily living their lives and laying eggs, but they're all getting a bit old, so I'd like to breed a new generation from the best of those left.

We had to go to town anyway, so last night caught the chosen rooster and caged him, then took him to town and met up with Arthur to exchange birds. 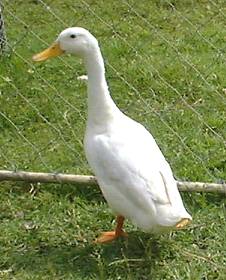 I have spent some time getting the new Crafts page set up, to display Stephan's wood-turning, in particular.  If I get good enough at pottery, there just might be a bit of that there too.

A little Old English Game Bantam hen has been sitting in her nest in a small plastic rubbish bin in the porch at the back door for about three months.  Her eggs weren't fertile (or if they were, they would have been of unknown paternity) so I removed them.  She seemed quite happy sitting there as we came and went, Bendy occasionally poking his nose into the top of her container when I'd left the outside door open - he likes sitting beside the washing machine, out of the rain or sun.  Every day at some point, the hen would get out of the nest and pop out through the hole in the bottom of the door where the cats come in and out, and go off for a feed, so I just let her carry on sitting.

Three weeks ago I had enough Pekin Bantam eggs to set under her and they have been hatching over the last couple of days. 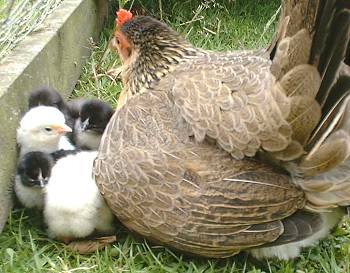 Both parent birds appear black but were of some eggs I bought some years ago, half of which were supposed to be from blue (which in the animal and bird world means grey) birds, so I was pleasantly surprised to see a couple of yellow chicks.  I had bred the one original Pekin hen with each of the original roosters in turn, but suspect I hadn't got around to the present pairing.  This rooster is the last, since we sold two at an A&P show, and the last one I tried with her proved not to produce fertile eggs and then he was eaten by a hawk, leaving only one, who I've had caged since that time, to protect him from aerial attack!  (Actually, caging him is also to protect the rest of us from hilarious ground-launched attacks by him, in a flurry of black feathers and tiny feet!  He's an extremely aggressive bird, but fortunately doesn't usually reach much higher than a tall gumboot, but as we have children around quite regularly at the moment, he must be restrained, since he could do significant damage to a small face.)

We have lost a duckling.  Since Thursday morning I've been hunting around for any sign of the missing baby, but have found nothing.  I recall there was some unexplained alertness amongst the adult ducks a couple of days ago, but as I didn't think to look out across the paddocks, I may have missed the cause - it being quite likely the duckling became hawk lunch.

The ducklings are growing quite quickly, so I hope they get big enough soon not to be at risk for much longer.