Finally some warmth! For the last couple of days it's been very hot, after a far-too-cold spring (officially the coldest recorded in 30 years!).  And so of course, now we want some rain. 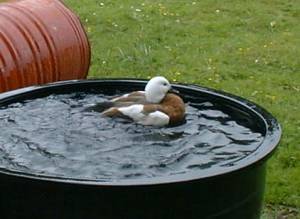 Ms Duck won't be told that this is not her private swimming pool.  I'm not sure that the cows appreciate drinking her bath-water. 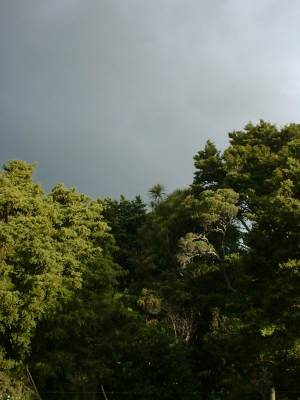 These clouds began gathering, threatening rain, but nothing came of it.  The quality of the light in these conditions is quite extraordinary - bright sunshine against heavy dark clouds and a very oppressive feeling in the air.

Sunday, the 1st of December

I haven't been taking a lot of photographs recently, probably because I've just been busy getting on with things at a time of year which always feels too crowded with things yet to be done. So while I was out shifting the cows and calves I thought I'd take a few of some of them. 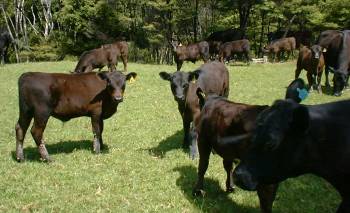 Every year the calves are looking more and more uniform, which in this business is a good thing.  I miss the obvious differences between them, but once they're tagged each year, at least I can see who they are.  Five years ago, there was a vast difference between the best calf and the poorest.  Three years ago there was less difference between calves in the top two thirds of the group, but still a number who really weren't up to scratch.  Now there might be the odd one whose growth and appearance aren't quite what I'd like to see, but that one might well have been considered quite a good animal five years ago.  It's so good to see the results of all my work and planning.
Come weaner-fair time, when we sell most of the calves, their relative merit is still only stacked up against the price on the day, so the fact that this year's calves are better than ever, may not mean that we achieve a better price for them this season.

The "young mob" over the road on the hill were due to be shifted and had begun to complain.  One big steer had even achieved an escape from the paddock in the morning, straight over the top of the fence (it's time he was put on a truck and sent somewhere from whence he cannot escape).

Abigail is in that mob, so I took the brush with me to give her a bit of grooming... 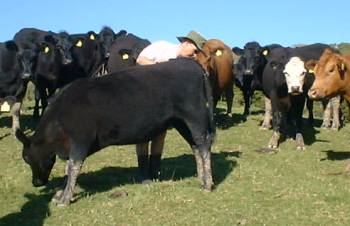 Then we continued with the moving, down the hill ... 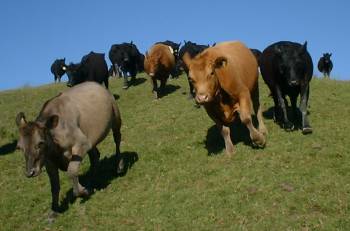 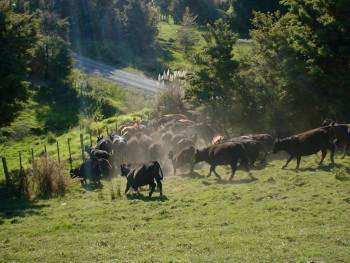 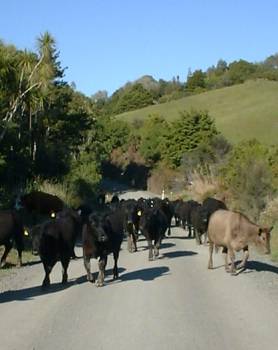 ... to the new paddock, where it's all heads down and munching.

We went to Whangarei, two hours south of here, for the day.  Well, it's usually two hours driving and that's what we allowed for the trip, but then we met this... 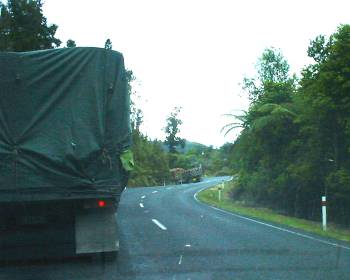 ... huge, fully-laden articulated trucks, slowly making their way up the steep and winding Mangamuka Gorge, with us stuck behind them.
There are various places where one can overtake if one is quick and knows the road, and also places where the drivers will pull over to the side of the road and indicate to following traffic that it is safe to pass.  We passed ten such trucks on our way south, which made our trip a bit longer than we'd anticipated.
There are vast areas of pine forest in the north, now being harvested and a mill which processes some of it.  Some trees go south on these trucks, some trees are imported to Kaitaia from places south, so we see the ridiculous sight of trucks full of logs passing each other in opposite directions, but we presume the logs are of differing quality and so get processed by different mills.
Then there are trucks, like the close one in the picture above, carting the products from the mill to other places and milk tankers which travel around northland picking up the milk from dairy farms and taking it to just north of Whangarei and numbers of similar and smaller trucks transporting goods mostly to Kaitaia for local retailers to on-sell to we ordinary folk.

At some times, though, one can travel on practically empty roads and it's a delightful trip.

On the way home again, we took a detour, since we were invited to dine in Kohukohu, a little village on the northern side of the Hokianga Harbour.  I don't think I've ever been on the road we travelled, between Ohaewai and Rawene.  There is some fantastic scenery.  I was particularly taken by this range ...

... although I unfortunately failed to note the name of the settlement pictured.  It was just a little south of the turn-off to Rawene.

To get to Kohukohu from Rawene, we had to catch the ferry across the Hokianga, but just managed to miss the one at 5.30pm and had to wait for an hour for the next one.  While we waited, we had a lovely cold beer (I've forgotten the name of the place and it's sadly not listed in the site I've linked to, above).  We phoned Jill & Bruce, our dinner hosts and told them we'd be there a bit later and they decided to catch the ferry over to meet us at Rawene, just for fun. 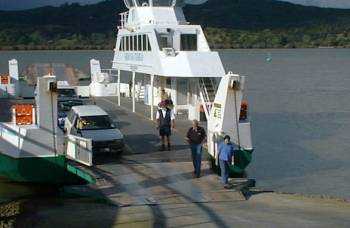 Once finally on our way across the harbour, I noticed that the occupants of one car on the ferry were four young women, who looked very much like self-contained travellers in need of a camp-site.  I approached them and confirmed that they were, and to their delight and ours, provided them with directions to the farm, and to the easiest paddock in which to pitch their tents, where no stock would curiously harass them.  We parted company again once back on land, and we went to dinner and they went north.  They weren't sure if they'd get as far as our place that evening, but said they would definitely visit.

Arriving home very late that night, we had no idea if we were alone on the farm or not.  We peered, with a failing torch, at the track out onto the farm, but since everything was so dry, we could not decide if there were new tyre tracks there or not.

...we looked out the window to see a couple of tents in the distance.  Our guests had found the right farm and even the correct paddock.

They did a day trip to the beach and then when it started to RAIN, they went to stay up at Waitiki Landing, while they explored the Aupouri Peninsula.

The rain came and poured very nicely for a good number of hours, so that we felt less concerned about the forecast of a long summer drought.  By dusk, it had stopped, so we were able to go out and do all the things we need to at the end of every day, which was very convenient.