Ah, bliss, school is out and although I have a little work to complete before the end of the year, that's the end of needing to make an appearance every day.  Now of course we head into a different and more satisfying sort of busy time - except now it's raining so wonderfully, that I think I'll just wait for a bit.

Our guests reappeared, looking a little damp.  We'd lit the fire to dry the house out a bit, after a few days of very humid weather before the rain, so we were very warm and dry.  I was sitting knitting a hat which a Crafts page visitor had ordered and my wares were spread about me.  Cortney was particularly taken with one of them and so I made my very first in-person hat sale! 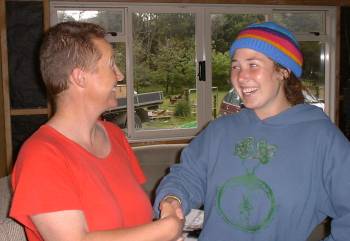 Gisela, Britta, Cortney and Marlie, came in and sat in front of the fireplace and didn't seem much inclined to return to their wet tents out in the field.  So they didn't.  Stephan and I went out to the Topmilk (Stephan's work) end of year dinner/party and left our guests to the house and fire.  When we returned, we found them bedding down for the night in front of the fireplace.

I took the women for a short bush walk in an area full of fairly large old trees which we fenced off a couple of years ago.  Then they left to have a look at the Bay of Islands, on their way back to Auckland and other places. 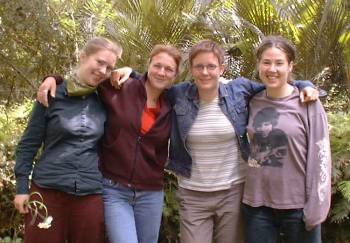 I drafted the yearling and older heifers off from the larger 'young mob' and weighed them all, drenched those still young enough to need it and sent them out to join the cows and calves.  Usually I would have begun mating already, but since the spring was so cold, I decided to delay everything by a couple of weeks.  I suspect that the cows may have forced such a delay themselves and then I would have had a few early calves and the rest strung out over too many weeks next spring.

Stephan has been busily changing the landscape again, so now, in whichever direction I look, I see fine lanes, just waiting to be filled with obedient stock. 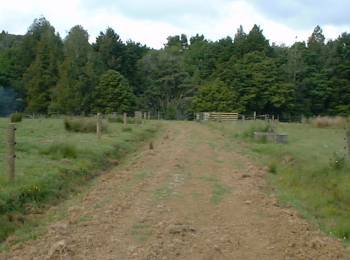 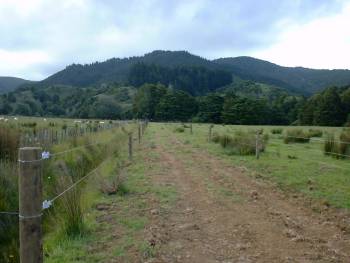 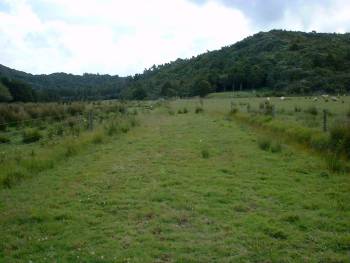 This last one's a bit harder to see, since it's been fenced for some time and the track hasn't been smoothed over since last year, so the grass has grown over again.

I went out to see how the next section of fencing was getting on, but ended up getting engrossed in conversation with cows.  Sometimes I even let Stephan near them. 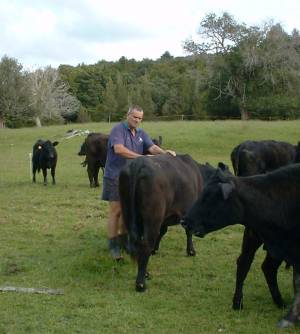 Most of the mob had gathered around in this bit of the lane, either checking on what Stephan was up to, or investigating each other, since a couple or three were on heat.  I think that putting the young heifers out with the cows has probably stirred them all up.  I'm very glad to see some action, at last, since I'm to pick up the semen bank tomorrow and if it isn't pouring with rain, I will officially begin mating.  (The rain is significant only because I want to stick indicators on their backs to tell me when the insemination mob cows are on heat and when the cows with the bulls have been mated.  If it's wet, the glue won't stick properly and whilst that wouldn't stop the cows getting pregnant, it might interfere with my knowing who gets pregnant when, or worse, who's ready for insemination.) 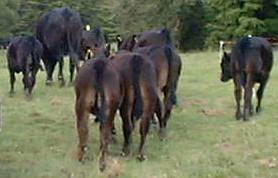 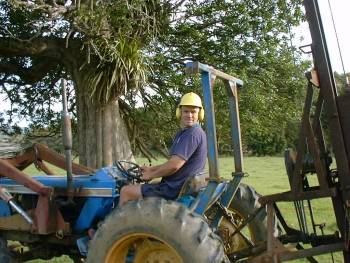 Since buying the fence-post-thumper for the huge sum of $50, Stephan has enjoyed fencing much more than ever before.  He can now go out and finish a fenceline during a day's work.  Occasionally there's the frustration of a post hitting a tree root or rock well below the surface, which can skew its travel and leave the post crooked, but otherwise the thumper saves hours of back breaking digging and pounding to get the posts into the ground.

Lastly, for this evening, Foxton has found yet another victim, this one screaming in the most disturbing manner.  Stephan seemed to know what it was, but I'd never heard such a noise before: a frog! 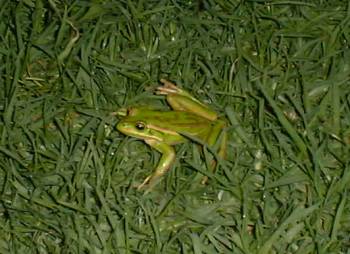 Unhurt and hopefully now safely making its way into the night, the first frog I've seen here in years.  They seem to be returning this year.  I hope they stay.

I brought all the cows in to the yards and spent some hours weighing the calves and yearling heifers (to see which yearlings had topped 300kg to be eligible for mating this season) and then stuck the mating indicators to their backs.  What a job!  Glue EVERYWHERE!  I was using a grease gun tube which just kept dribbling glue, so every time I picked it up to apply more to a cow or to the next indicator, it got all over me, the wooden rails, my clothes, legs, arms, hands.  I kept getting stuck to things - cows for instance.
Fortunately, apart from a couple of quick showers, the rain held off, which made the job a lot easier than it was last year, when it poured while we put the indicators on.
Afterwards, I called Stephan in to help draft the cows into three mobs: one each for the two 2-year-old bulls and one for me to inseminate.  Then we took them out to their separate paddocks and went to get the bulls for the cows.  The stupid boys decided it was a good time to push each other around, so we only had time before dark to put Quadrille 07 out with his mob.  One of his heifers was on heat so I wanted him out there with her.  None of the other cows were showing any sign of needing the bull, so we left Lendrich 05 where he was for the night.

This afternoon a visit, from some lovely neighbours, all nine of them, for a swim in the river. 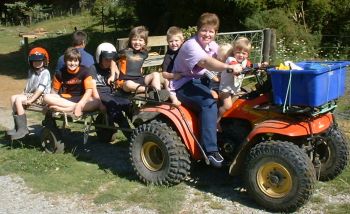 After taking Lendrich to his cows, Stephan and I went for a walk out to the back of the farm, looking for Inga 11, one of the stud heifers, who wasn't where she should have been the other day, when I was sorting out the breeding mobs.  I suspected that I'd previously drafted her into the wrong mob, but needed to make sure.  It was also time for a move for her and her companions, from one paddock to another.

While we were out there, we wandered a little further to see how the ragwort was getting on.  Stephan spent part of a day out spraying poisonous chemicals onto the ever multiplying patches of ragwort in our furthest back paddock and now we're waiting for it to die off completely before we can put cattle into the area again.  While it's in this wilted state, it becomes more palatable to the animals, but no less dangerous to their health. 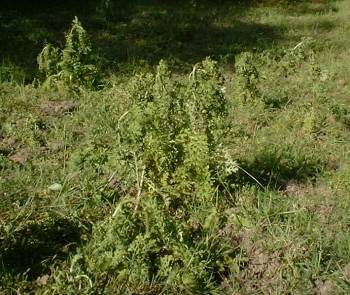 Then back see the fencing progress.  This is one side of a lane travelling through this paddock.  We're completely refencing this area since most of the old fences have fallen over. 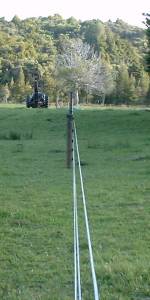 Then to check on the cows and heifers with Quadrille 07, one of the bulls...

...and to move them from the part of the paddock they'd eaten, to the part beyond the new fence.  Apart from the bull, who just followed me through this open gateway, they all stopped in alarm when they saw the tiny trench in the ground (there for the electric cable to travel from one part of the fence to the other).

Cows are often really unsettled by the smallest things.  The way in which they sense things is obviously completely different from ours.  A bit of white paper on the ground will cause them to go completely mad and run past it as quickly as possible, as if it's going to jump up and bite them.  Freshly turned earth is obviously very disturbing.  Then again, it may be the darkness within a hole that they don't like.  I know these things about them, but sometimes it still surprises me, just how small a change can completely disconcert them.