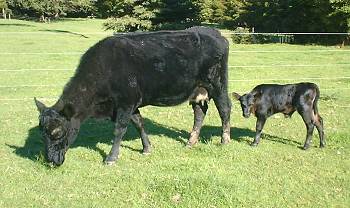 Here is Onix and her bull calf.  Issa owns Onix and I've not even heard from him since she had her baby!  Issa, where are you? 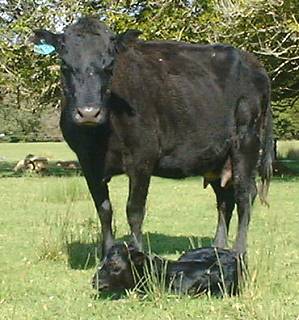 This is #37, who has lived here since an unreliable stock agent landed me with a motley lot of 17 heifers from the Hokianga in 1996, half of which turned out to be pregnant at the time, and of which less than a handful proved of any long-term use!  This is the last of those heifers still in the herd, kept because she reliably produces one of the better growing steer weaners every year and has caused no problems at all.

This year, after producing six bull calves in a row, she's finally had a daughter to replace herself in the herd.

I'll probably cull 37 from the herd this year, partly because she's getting on a bit, but also because there are so many potentially better young heifers to bring into the herd and some of the older cows have to go to make room for them.  I'm gradually eliminating the older cross-bred cattle, so that the herd has a progressively greater Angus base, although there remain a small number of younger heifers which are only 50% Angus. 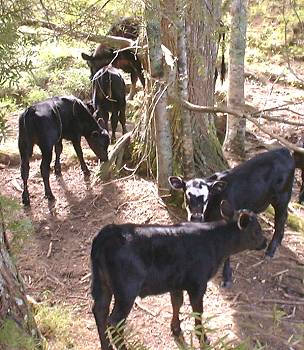 The yearling heifers and some of the calves and cows are over the road on the hill, so I went to check on them this morning, where the older cattle were all grazing up one of the gullies and the calves playing under the trees. 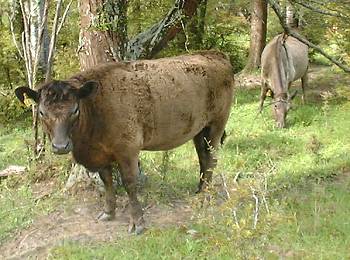 443's sire was Merchiston Playboy, so she's a sister to Onix and her Aunty 348 as well!  It's getting quite difficult to remember who is related to whom and how, these days.  I have to refer to the records more and more often to ensure I don't do any accidental close-relative mating. 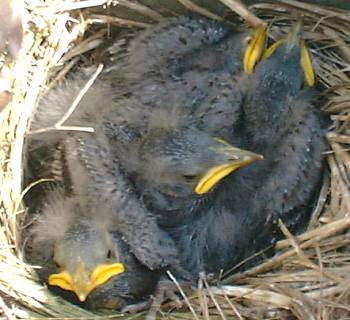 The starlings continue very stinkingly occupying our mailbox.  There are still four of them; the warm weather must have increased the food supply, enabling the parents to feed all of their babies, instead of raising none or only one or two to independence. 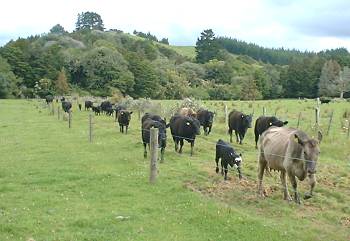 I brought the cows, calves and heifers off the hill over the road late this afternoon.  I'm always a bit careful about the time I do this, in terms of what traffic might be likely to be on the road at the time.  Just as we'd got all the calves out of the gate and they were coming down the slope leading onto the road, there was the sound of a vehicle which suddenly hurtled around the corner at speed and I ran in horror with waving arms and much shouting, with complete disregard for my own safety as I watched one of the calves step out onto the road into the path of the car driven by this idiot who treats our road like his own personal rally track.  He skidded to a halt, fortunately maintaining enough control not to spin round and collect us all and we all stopped for a few seconds while the animals on the road crossed to safety, then off he went, to create danger and mayhem elsewhere.

Feeling in need of a stiff brandy, I drafted the yearling heifers into the yards and put their long-overdue pour-on drench on their backs, feeling reasonably confident that the gathering clouds weren't going to produce actual rain.  Then I walked the whole mob out to the Camp paddock for a couple of days' grazing. 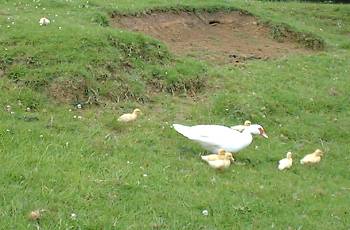 Hawk lunch?  This duck started off with ten ducklings and has managed to keep all but one for several days, despite spending much of her time out in the fields a very long way from our house, and often from any trees.  She had made her nest in some unknown (to me) place, and just appeared one morning with her family.  I doubt that many will survive.