We've had no more calves since last Monday, when there were three born.  There are twelve pregnant cows yet to calve. 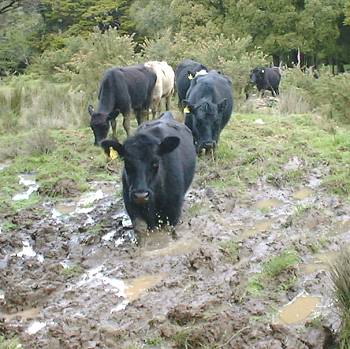 The paddock we call The Pines has a swampy area at the bottom due to a spring or two in the hillside making its way down to the river through here.  There's a gate at either side of the paddock and naturally the cattle gather at one or the other.  This time I wanted to shift them out of the gate at the other side of the paddock from where they were sitting under the trees, so called them to make their way across the bog.  We're still trying to work out the best place to put a culvert in this area, to make a better crossing for the animals, but they'd no doubt still slurp around in the mud when reaching for the swamp grasses they enjoy.

I watched as Onix, Issa's cow calved at about 10.30pm.  I didn't disturb her to see what sex it was. 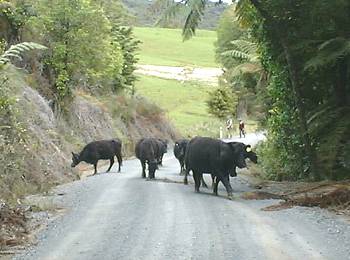 Jill and Bruce came to visit, so we took them for a walk to fetch the cows from along the road.  Six of the nine are in calf and getting a bit closer to calving, so I wanted them back nearer to home. 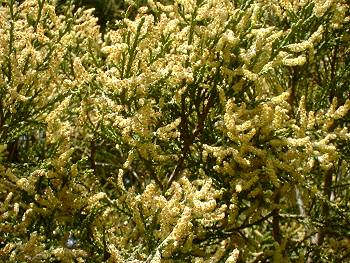 Over the last few days Stephan and I have been alarmed to note what first looked like great clouds of smoke rising from somewhere out on the farm!  It couldn't be dust, since it's not that dry yet and fire seemed rather unlikely.  We then realised it must be some of the trees releasing great clouds of pollen!  Out walking this afternoon, Jill and I examined some of the trees, which are loaded with the tiny pollen filled cones.  The Kahikatea (pictured) and Totara are both in a similar state.  The Kahikatea in particular have virtually changed colour from their usual dark green to anything from this light yellowy-green to a deep brown, depending on how advanced this process.  I don't recall noticing the trees so obviously in this state in other years. 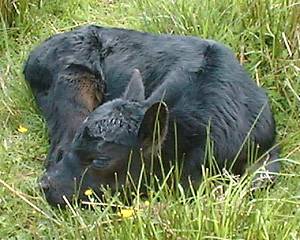 This is Onix's calf, her third, but her first bull baby.  His sire is the same as that of Isla's calf, so it will be interesting to compare their progress.  This one will be castrated to make him a steer, while Isla's calf will remain a bull, being of superior and long-recorded breeding.

Tuesday the 2nd of November. 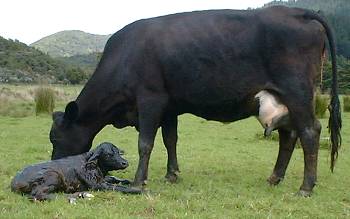 348 calved this afternoon, while making a great deal of noise, as she alone in the entire herd does.  With every contraction she bellowed loudly and the calf was born quite quickly, while 348 stood.  The sire of this calf is an old Kaharau bull via some straws I was given a few years ago.  That bull is sire of 359, who's a lovely quiet cow who appears to have little milk, so I have used him over this cow and her sister, #16, both of whom obviously have far too much milk for their babies to consume!

As I prepared the following photographs for inclusion on this page, it became increasingly obvious that I really do need a better camera.  I apologise that some of the following pictures are of quite poor quality and are included mostly for their news value.  Should you wish to contribute to the slowly growing new-camera fund, please let me know!  I have had a birthday, after all, and Christmas approaches. 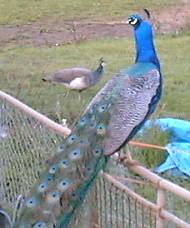 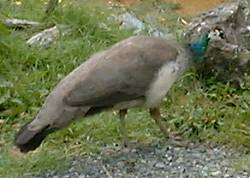 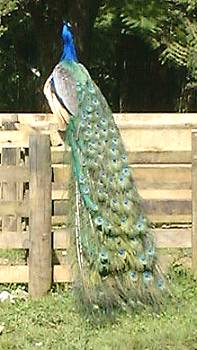 The Peacock is being very noisy and displaying to everything today, including his new friend.  She doesn't look terribly impressed, but we presume she is, or she'd not have come from afar in answer to his constant and loud cries.

The six remaining Paradise ducklings which inhabit the swimming hole out on the farm are now fully feathered.  I can't see any evidence of whitening around any of their bills, so they're either all male, or still a bit too young for that to begin to show if they're female.  Their parents are still making the usual racket any time anyone approaches the area, drawing attention to, rather than deflecting it from, the fact that their babies are swimming unprotected in the river.

Sybil, one of the three 'new' stud cows, went into labour this afternoon.  She took absolutely ages to get on with things, causing me some worry.  She seemed quite unhappy about my being in the paddock watching her, even from quite a distance, so I withdrew and climbed up the trunk of a fallen tree a long way away.  Even there, when I moved to raise my binoculars, she spotted me: her alertness is obvious, with her ears pricked and head up. 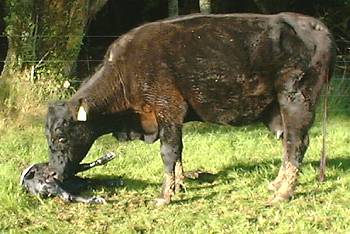 An hour after the first sign of expelled fluids and membranes (and after I'd gone off to set up the gates to the yards because I was really starting to wonder what was going on), Sybil produced a couple of feet and then her calf, a bull.
She dropped him onto his head, as so many of them do, and as also quite often happens, his head was underneath the rest of him - it's below Sybil's chin, back toward her front legs - and I always worry that they may not get breathing well enough in that position.  However I couldn't do anything about it, since Sybil looked a little menacing and I don't know her well enough to be sure I could go in and touch her calf without her bulldozing me across the paddock with her head!  She licked and he struggled and eventually untangled himself.

No sign of the suspected twin!  I don't know why Sybil was looking so thin a couple of months ago.  I checked her teeth and she still has them all and she was on the same feed as the others in her mob, most of which were holding their condition quite nicely.  I shall note it in her records and see if she does the same next year.

When I was out wreaking death and mayhem in the 'possum population after dark, I discovered Abigail in labour.  I stopped to watch her and realised she must have been going for a while, since there were feet appearing with each lot of contractions, then disappearing within her again.  The two feet were at a very odd angle, as if the calf were coming out sideways!
My torch battery was obviously running low, so I turned off my torch in between contractions to conserve its energy, then suddenly it failed to go any more at all!  There were only stars to light my way, so I carefully walked home to find another light.
It's lovely walking in the dark out here, as long as one doesn't accidentally walk into a black cow in the dark, or fall over an obstacle on the ground.  The sky was completely clear and every now and then I'd catch sight of a light along the riverbank: glow-worms.
When I arrived back to see Abigail, the calf's feet had rotated most of the way around to a more normal position and eventually she actually lay down to birth the calf.  I realised, once it was over, how worried I'd been that things weren't quite right.  One oughtn't to be quite so emotionally attached to one's cows if one wants to be a real farmer - after all, if they're beloved of their own individual selves, one can hardly make sensible decisions about culling them from a production herd if necessary!  Too bad.  I have come to love this wee animal and feel entirely responsible for what happens to her.  Part of my worry was because I'd calved her last year as a two year old and she'd had such a long hard labour on that occasion.  The test, as far as I was concerned, of success in her breeding and in breeding her was proved by her getting back in calf with this second pregnancy and then successfully giving birth to the calf with much less difficulty than she had with the first.  Abigail now has her second daughter. 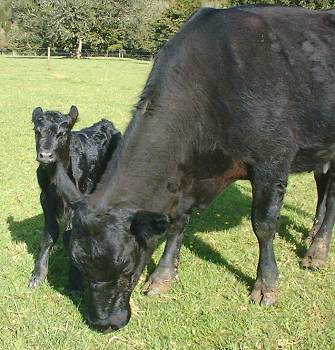 Abigail and her calf.  The calf is a ridiculously spindly thing - narrow and leggy.  Her sire is Minerts Fortune 2000, the same as that of #452 who was the fastest growing heifer last year, from #348, so I'm not too worried about her appearance at the moment. 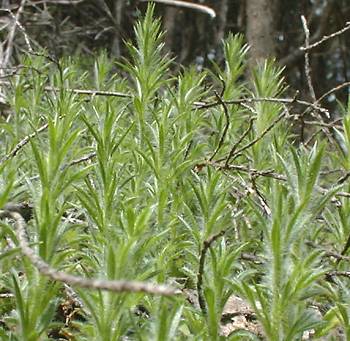 I found this beautiful forest along the new track we made last summer to rescue #356.  The plants are tiny gorse seedlings.