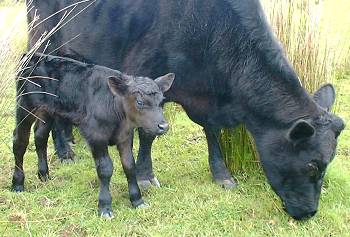 Here is Isla and her bull calf, a little later in the morning.  She hasn't been at all concerned to hear of the number of people with an interest in when she delivered this baby! 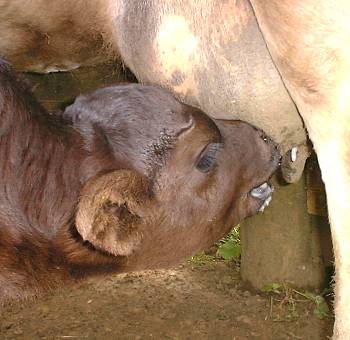 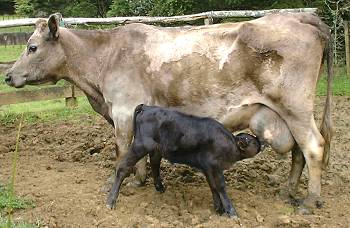 Success again this morning with 16's calf, both in the race, and then when we let 16 out and the calf followed and reattached.  Now we just need to observe this in the paddock and we'll know all is well. 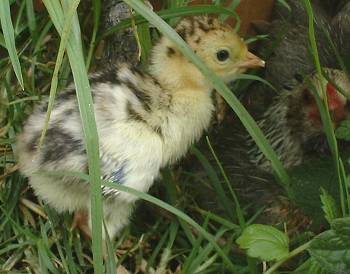 About five weeks ago, Stephan was out at work, delivering the milk to the shops around the North Hokianga, and stopped to make one of the few home-gate deliveries on the way.  There was a turkey near the gate at which he'd stopped and when he got out of his truck, it stood up and walked away, and there was an egg on the ground!  The egg was still warm and the turkey was obviously not actually nesting right there on the side of the road, but had just laid the egg.  Stephan brought the egg home and it sat in my desk for several days until I got around to putting it under a bantam hen. 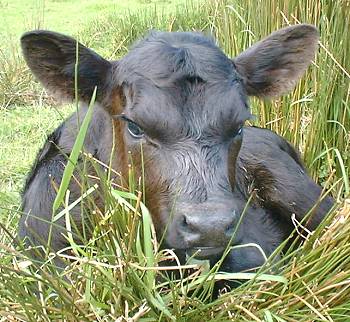 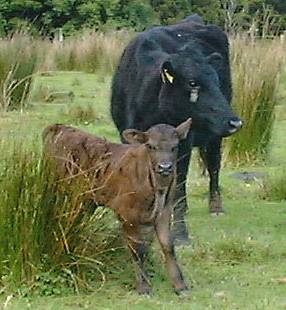 341 had this light-coloured bull sometime before dawn.  I almost kept her first (heifer) calf last year, because she looked quite good, so I'm looking forward to seeing what this calf's growth-rates will be.  341's mother was a splotchy dairy-cross cow, probably of Jersey and Hereford parentage.  341's sire was Merchiston Playboy, and this calf's sire is a bull named Victoree Scotchcap.  He will be castrated with the others and sold as a steer at weaning time.  If he's especially good, I will use the same semen in his mother again this season, in the hope of getting a heifer next year. 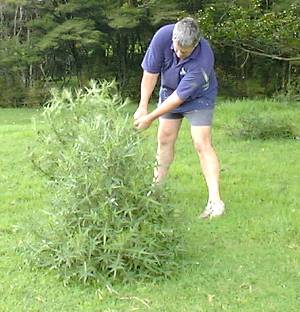 Stephan and I went out to the very back of the farm to check the cows and calves there, so took our weed-fighting gear with us.  We keep meaning to do so, and for various reasons don't quite get around to it, but the thistles are just beginning to flower, as is some of the ragwort and it's time to take ACTION!

We've accepted the need to fight the ragwort with herbicide, since it's just too big a job for the two of us to maintain control in any other way.  One of the management problems that then creates is that after one poisons a ragwort plant it wilts and becomes more palatable to the cattle before it dies and dries up.  Ragwort will cause liver damage in cattle and they will generally not eat it unless they're really pushed for feed, or can't avoid it where it is thickly amongst their pasture grasses.  Unless the weather is extremely hot and dry, we end up with wilting ragwort in most of the paddocks for several weeks.  As far as we can, we only do the poisoning after the cattle have already grazed the paddock, but there's a fairly short period in which the ragwort can be killed, before it flowers and sets its multitudes of seed. 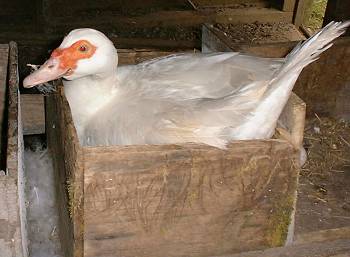 For a number of weeks, we've been finding a Muscovy duck egg in with the hen eggs in the laying boxes in the hen house.  One of the ducks lives in there with the hens by choice (she could easily fly out of the enclosure, if she wished to).  I was surprised that she was able to get up into the nesting boxes, since she's a large, heavy bird and her wings are built for long flight, rather than short flaps into tight spaces!  Now she's sitting and has evicted a couple of the hens which had also been trying to nest in the boxes. 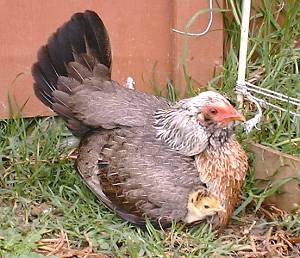 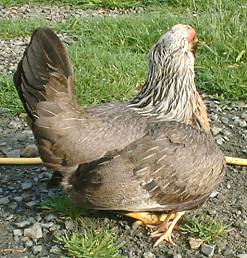 The turkey chick has survived and appears to be doing well.  It's a funny wobbly little bird - looks like it has taken a while to get used to its long legs!

We've lost our mailbox to the starlings again. 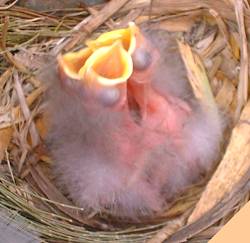 It's a territory argument we don't even bother trying to fight, solved simply by having our mail delivered to Jane's mailbox instead.  Anything sitting in our box over the last few weeks has been at risk of being shreaded and tossed out the letter hole and anything being pushed into the box now might hurt our babies!  In a couple of weeks they'll be gone, I'll clean out the vast quantity of nesting material and life will return to normal.