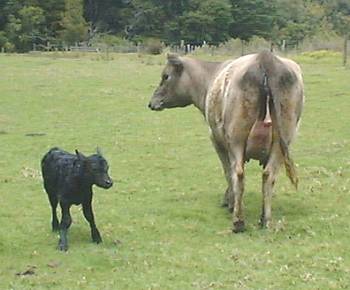 I wasn't watching today while this, the penultimate calf for the year, was born.
#367 is the daughter of #16 (who is the same colour and featured on the 9th of October with her latest calf), and is now 2½ years old. 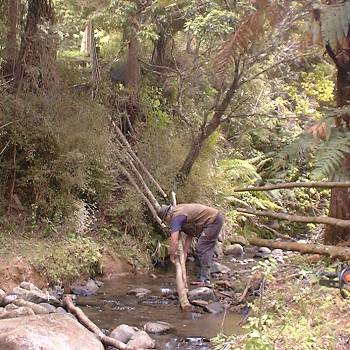 The last rather large flood, partially demolished the flood-gate across the river-bed where it enters our property at the back of the farm, so we went out to fix it.

Stephan first cut down a couple of tall, straight Manuka trees (which grow everywhere, very quickly) and used them to replace the missing rails in this part of the barrier.  The wood eventually rots, but lasts for a couple of years as railings, and since it is so abundantly growing, we use it in many such situations. 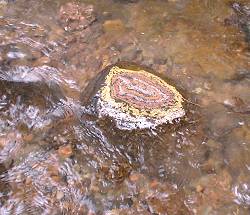 Meanwhile, I played in the river... so many different colours of clay!  White, grey, green, oranges and pinks - brilliant for colouring the tops of rocks to surprise passing eels and pigs! 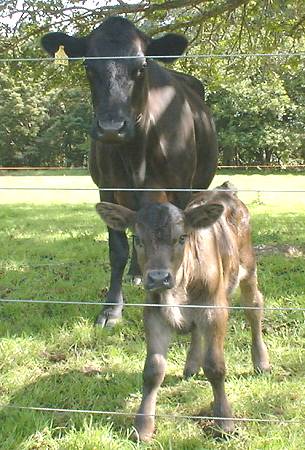 #348 and her heifer calf, born yesterday.

It has been fine for days, so I phoned my friend Ronnie, who lives about 20 minutes away from here, and arranged for Stephan to go over and shear her sheep this afternoon.  By the time we were ready to leave, there was a light rain falling here, but still not much at Ronnie's place, so we set out. 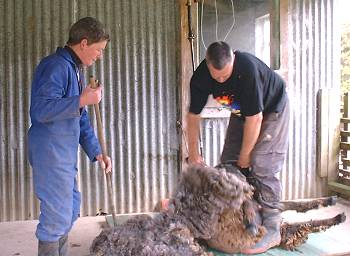 Stephan shore, Ronnie played rousie (the person who clears away and sorts the wool) and I sat and knitted - someone has to do the hard work, after all.  We were really fortunate in that the rain didn't fall where we were, despite the cloud cover being very thick and low.

We were rewarded with a fabulous pork roast dinner, all homegrown, of course.  Then we went home and I did all those end of the day jobs, very late, like feeding the lambs, and checking on Flower, who is the last cow yet to calve. 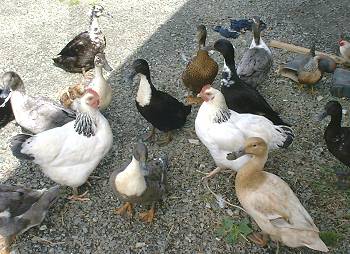 This is Stephan's fan-club.  They just hang around, waiting for him to appear, then follow him around ... until he feeds them.  When he's out at work, the first indication that he's about to arrive home, is that all the birds run off down the driveway, having heard his vehicle coming in from the road.

The Muscovy duck found a better place for her nest a few weeks ago and laid eight eggs in it.  When I found it, I took four of them away and put them under a bantam hen - after all, one oughtn't to keep all one's eggs in one basket, so to speak. 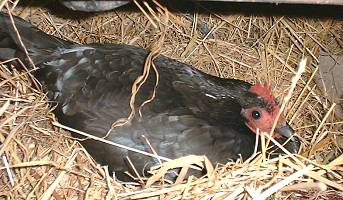 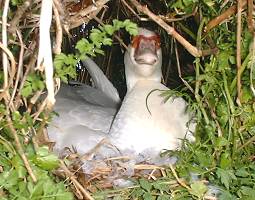 Now the eggs are about to hatch - when shining a torch light through the wide ends of the eggs, I can see the babies moving around, either through the membrane into the air-sac, or about to be.  The duck has two fertile eggs and the hen, four.

Rather late last night, Stephan dug in a post for me, in a clear spot in the paddock outside our house, so I could begin halter training Demelza, Abigail's daughter.  After such a splendid effort, I thought I'd jolly well better get on and use it! 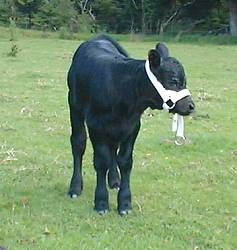 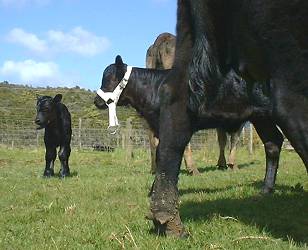 This was actually about as far as I managed to get, because although I succeeded in getting the halter onto Demelza, there was no way I could encourage her and the others down the paddock to tie her to the post.

The halter is only just small enough when the buckle is fastened to the tightest extent, so there are long bits hanging down below her chin - one is the rest of the head-strap and the other is the under-chin strap, to which I will attach the lead.  I put it on her to get her used to that part of the set-up for a start and she wasn't too happy about it for a few minutes, trying to back away and shake it all off her head, but she soon settled down and later lay down for a nap.  I left it on her for an hour or so, checking every now and again to make sure she hadn't become tangled or caught on anything, then took it off again.

I thought, last night, that Flower (Taurikura Flower 682) was about to have her calf, but nothing had happened by this morning.  She has been taking an increasing interest in #348's calf, which is a pretty reliable sign that she's about to calve. 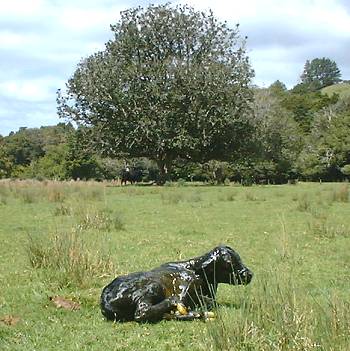 This afternoon, she did it.  I was on my way over to have a look at her when she dropped her calf on the ground.  Both Flower and #348 went for a sniff and Flower bellowed and jumped around, then ran off with #348 and her calf to the other end of the paddock, leaving her poor new-born boy alone.  The cows are in the picture, under the big tree.

Flower was licking and vocalising to #348's calf as if she were the new-born and #348 was getting quite distressed about this attempt to steal her baby.  Eventually I managed to get #348 and her calf out of the paddock, leaving Flower and her calf alone, but Flower still wouldn't take any notice of her own calf, other than pushing him over if he approached her.  I got an electric tape and enclosed her in a small area with the calf, in an attempt to promote some bonding.

I watched them all afternoon, as the calf moved around to find his mother, and she moved away from him and the situation didn't seem to be improving.  Fortunately the day was warm and sunny, without a lot of wind. 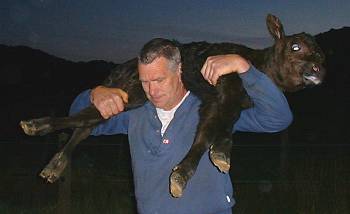 Before it got dark, we went across and brought Flower out of the paddock and back to the yards, so we could give the calf a feed.  There was no way Flower was going to let him anywhere near her on her own.

Stephan carried the calf most of the way back, since although he's pretty huge, he's still a new-born baby.

We had to put Flower up in the head-bail to restrict her movement and enable the calf to learn to feed and then to get a good amount of his first colostrum. 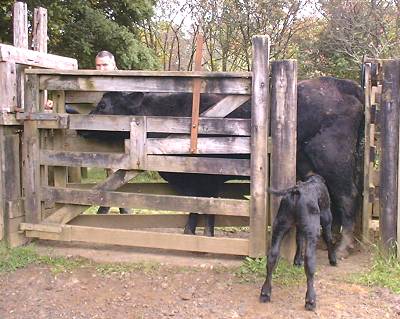 This morning we figured out the best way to keep Flower comfortably restrained so she couldn't hurt the calf as he fed from her.  Stephan stood and pushed the gate on his side of Flower in toward her, so she had to step back in the race until she backed into the vet gate behind her.  That meant she couldn't go forward or backwards and the calf could easily access her udder, without danger of her moving and hurting him as she did so.  She stamped on the calf's feet several times and attempted to kick him and as soon as she was let out the gate, she bowled him over and tried to push him into the ground.  Obviously she's still convinced this calf has nothing to do with her.

I went out for a spot of retail therapy in town, for the first time in months, since I've been so busy being midwife and nurse, first for the sheep and then the cows.  I spent a wonderfully relaxed couple of hours (apart from the moment when I remembered one can be fined for parking in one spot for too long - at which point I went out and drove the vehicle forward one parking space, the demand for parking not being terribly high in the Kaitaia main street) looking for knitting patterns and selecting wool for future projects from the last wool shop's closing down sale.

When I returned home, I could see the calf sitting in the corner of the yards, but no sign of Flower.  She had apparently decided she needed to get back out on the farm to "her" calf (#348's baby) and had climbed/jumped over the gate and then another fence to try and get there.  We began to reconsider our options and decided to try bringing the other cow and calf back to Flower in the hope it might settle her down, but soon discovered that Flower is so convinced that the other calf belongs to her, that the calf's presence only made things worse and Flower's attentions to that calf made #348 extremely anxious.  We sent Flower off to another paddock, intending to see if we could get #348 to adopt the abandoned calf, but she was not nearly as accepting of that idea as she had been last year with Ivy's twins, so Plan B was abandoned and #348 and calf went off out to the other cows again.

Next we brought Flower and Isis in together, hoping that the presence of another cow would settle Flower enough that she wouldn't go over any more gates - especially since she appears to have hurt her foot during her first attempt at escape - and that not having another calf with them might be a good idea.

This is not a situation we've often had to deal with, so we were unsure how best to proceed.  When Flower showed such complete rejection of her calf, we thought perhaps she'd never be willing to accept him, so we felt it might have been easier to try putting him with another cow, but we'll now persevere with mothering him onto her and see how we go. 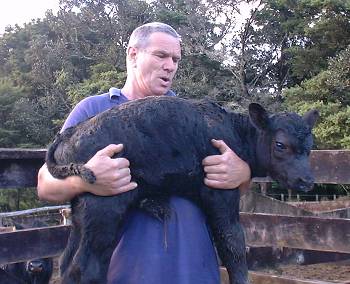 We weighed him this afternoon: 42kg!  He's probably bigger than Demelza at two weeks old!

Minty keeps crossing the river from the chicken paddock where the rest of the sheep are currently grazing, and hanging out with the ram and Damian.  Oh, so relaxed....

The lambs have all (actually there's one left) lost their tails now, and most of them are growing splendidly.  There are a couple whose mother obviously doesn't have quite as much milk as they need, so she'll have to go on the cull list for the end of the season.

In the midst of all the calf problems, I'd completely forgotten about the ducklings who were hatching.... 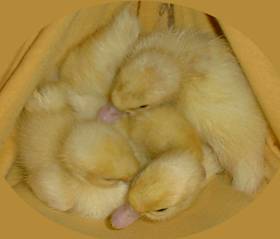 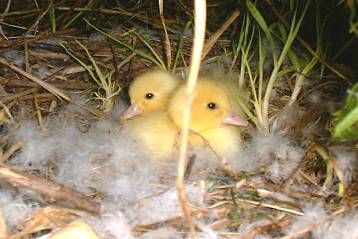 .... they'd all managed to get out of their eggs and were healthy and lively under their mother and foster Bantam. 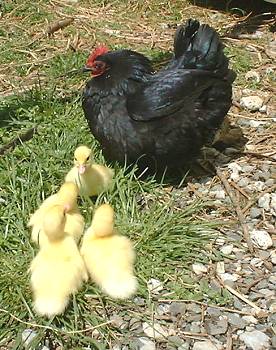 The ducklings were out and about this morning... 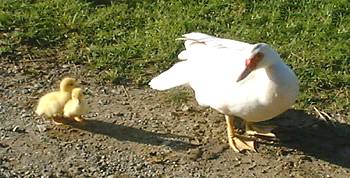 After the second (around 2pm) feed today, the calf went straight over to Isis and thoroughly investigated her udder! 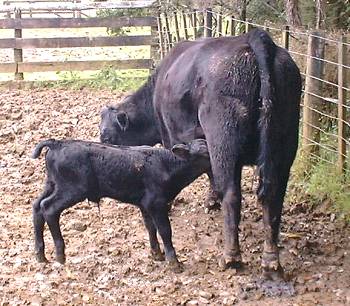 He seemed to be sucking some milk, although not a lot and goodness knows what it was like, considering she calved two weeks ago and has been left to "dry off" since.  She didn't seem to mind and I don't think it will do her any harm at all to feed him if he can get some milk from her. 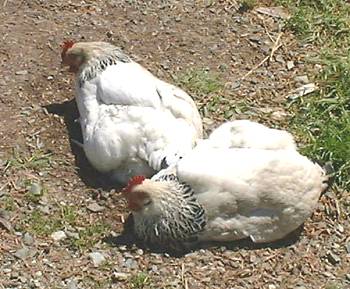 No wonder these two have been looking so disgusting!  You just can't dust bathe in this sort of dirt and expect to have glistening white feathers.