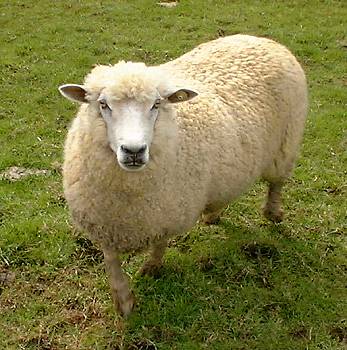 Sometimes Yvette looks positively evil!  She was running in towards me for a taste of some maize I had in a bucket.  If I don't give Yvette enough maize quickly enough, she scrapes down my legs with her hoof, or if I'm walking, she keeps trying to push around in front of me so I have to stop, or fall over her.

The sheep are supposed to be walking down the lane, along which they can now find dry bits to walk upon, but many of them decided they'd prefer to jump through the tape gate and into the house paddock instead.  But in the end, we won - the sheep went where we wanted them to go.  Once they got there, I think they probably figured it was all rather nice too, having large quantities of lovely fresh grass, which we figured they were due for, after a couple of weeks of rather short rations.

Then, since the other sheep are now a lot closer to the house again, it was time for Tabitha and Dotty to rejoin them.  They've been helping themselves to gardens and grazing to which they have no right, so have been learning to cope with collars, and being tied up. 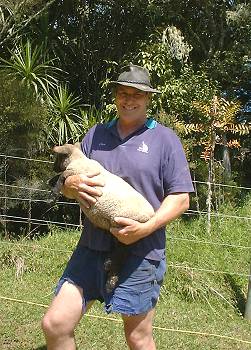 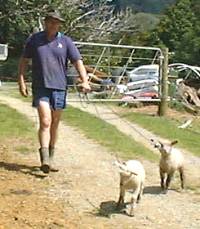 These pictures are just to prove that hard old guys who used to be serious shepherds can get quite soft in the end - imagine, any self-respecting traditional sheep farmer, moving sheep by leading them with buckets of maize, leading lambs around with collars, or carrying bent lambs and giving them cuddles! 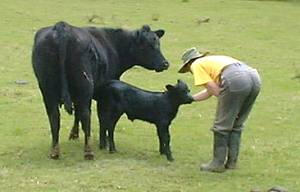 I've decided this calf will be named Demelza.  When I was young, I remember watching "Poldark" on the television and being madly in love with Demelza, although I can remember little about the story itself.  My youngest sister called the programme "Muddy Waters" because part of the opening theme showed sunset over the sea, which made it look an orange/brown colour.  Our Demelza was born on the morning of all the muddy waters, so I'm giving in to my whim.  Abigail's offspring, because of the timing of her first birth, will all have "D" names. 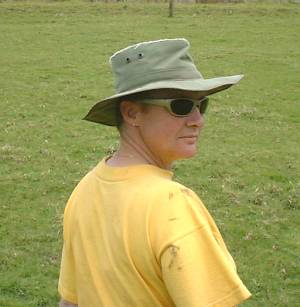 We went out to move the cows and calves into another paddock and then heard those of the "young mob" calling from further out on the farm and since they didn't have a lot left to eat, we moved them too.

This bit looked like being a bit tricky - I thought some of the calves might come through the fence and get mixed up with the older animals and then they'd be in the wrong place again!  So I pushed the older ones along the lane and managed to discourage the calves from going through the wires. 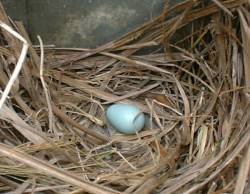 We've been evicted from our own mail-box again - the Starlings are back.  Our mail has been being scratched open for the last couple of weeks, as the bird scrabbled around in the bottom of the box, sorting out her nest.  Things keep being thrown out onto the road and the whole thing is full of leaves and grass.

And over the road, on the side of the hill, in the small Totara tree, is the Blackbird nest which, two weeks ago was as the picture on the left, and today, on the right, the two babies who have hatched and obviously grown enormously.  No wonder she only laid two eggs, these babies must take a huge amount of feeding! 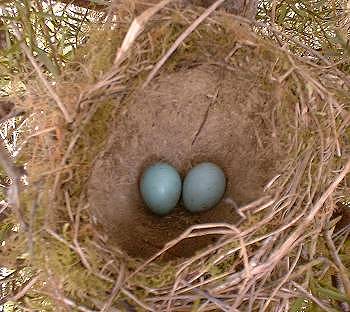 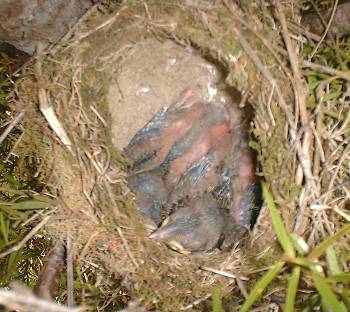 The biggest mob of cows and calves, 25 of each, needed shifting, so I went out to their paddock and called them down from over the river, off the hill.

Most of the calves were down here on the flat part of the paddock, while their mothers were up on the hill grazing, so as the cows appeared, the calves dived in for a feed, while we waited for the rest to make their way down to us.  (Isla is side-on, to the left-middle-ish with no ear tag.)

After a wonderful warm growth period for a few days about a month ago, the weather has been too cool for the grass to really get growing again and now things are drying out far too quickly as well.  Some of the cows are thinner than I'd like, but there's still no sign of any of the hoped-for spring growth. 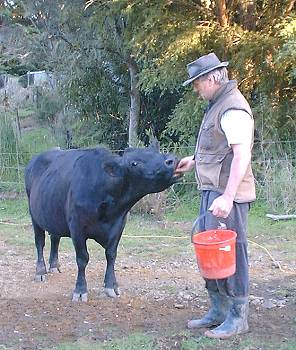 Ivy has been looking beautiful, all lovely and sleek - such a different cow from last year when she'd had her twins and then was trying to feed them on grass levels which were even worse than now.

Her fertility appears to have returned to normal, after being long-delayed after the twins, so I'll get her in-calf again this year, come mating time, and we'll see how she goes next year.  She's now 14, which is getting on, but she could well continue breeding for a few more seasons, if we look after her well enough.

She has become much more tame since last year, when I was feeding her daily when there was no grass and she was so thin.

Last year #348 had her baby backwards, so I was feeling a little nervous about this year's calving.  I was quite relieved to see her calf's front feet appearing first this year! 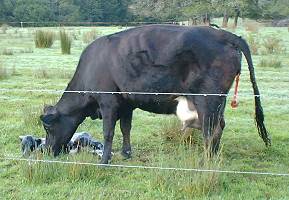 In the picture at left, she was bellowing during a contraction, which most of the cows don't do.  They usually grunt a bit, but most of them are very quiet until it's all over, when some of them make a bit of a fuss as they first meet their new baby.

The other two in the picture are her paddock mates, Flower (who has yet to calve) and Isis, who still has retained membranes, after the birth of her dead calf.

Realising that the end of the week had rather suddenly arrived, I phoned the vet and asked if I could get someone to come out to fix Isis up, i.e. clear out the extremely smelly membranes and provide any necessary treatment to assist her in regaining full health.  She has seemed quite well for the last week, and on Wednesday evening, the membranes had appeared and begun to drop, but had stopped again by Thursday morning.  My concern was that she might become unwell if we didn't remove what oughtn't still to be there, and she being a potentially very good stud heifer, I wanted to make sure it was all done correctly.

We can't believe how dry everything has suddenly become!  For the last ten days or so, there has been no rain and usually a crisp wind, which has whipped the moisture out of the soil at an amazing rate.  Suddenly we can walk around the farm in soft shoes and not pick up any mud at all!  We're going to need some rain again, very soon, and it would help a great deal if the temperatures rose and we had some sunny days as well ... we don't ask much. 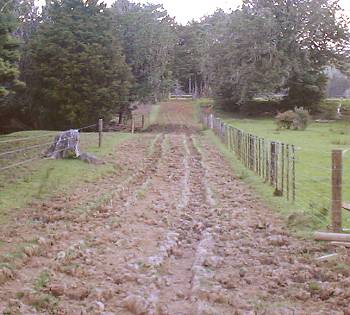 This is one of the wettest tracks on the farm and even in the middle, where it has been difficult not to get entirely bogged and lose one's gumboots, for months past, the mud is now hard enough to walk on and not even feel it move as one does so.  I've noticed the cows today, finding it really unpleasant to walk over these sorts of areas, since where the mud dries into points, it hurts their feet and legs.