I discovered Abigail, at about 5 o'clock this afternoon, sitting out in the rain, when the other three in the paddock were either grazing or standing sheltering from the rain, under the trees.  I went immediately to see what was happening and discovered that she appeared to have begun the process of birthing her calf.  Working on the usual gestation period of 275 - 290 days, with the average being 280 days (40 weeks), she is significantly early at 267 days (38 weeks and one day).  I had intended to move her to the paddock near the house, today or tomorrow, since I was beginning to wonder if she might calve early - her udder has been getting quite hard over a couple of days and she was born early, herself.

I watched her until dark, but she didn't seem to be seriously in labour, despite my having seen part of a membranous bag emerging from her, earlier.  I considered taking her to the yards, so that I could do a careful internal examination to check that all was as it should be, but my instinct was to wait and see, for the time being.

There was a heavy rain warning out from the Meteorological Service, (which sometimes means we actually get heavy rain) and it came pelting down during the early part of the evening, bringing the river up and over the bridge by about 11pm, so that removed the possibility of taking Abigail to the yards, should we have needed to assist her at that stage.

I checked Abigail frequently during the evening, until just after midnight, but nothing much appeared to be happening and she seemed quite relaxed.

Up at 4am to find Abigail much the same, but now expelling amniotic fluid, which looked the right colour and I could see movement in her body which I was sure was being caused by the calf.

Another check at 5.30am and she allowed me to insert my hand far enough to feel that there were actually a couple of feet on their way to the outside, although she didn't allow me enough time to determine if they were the front ones or not. 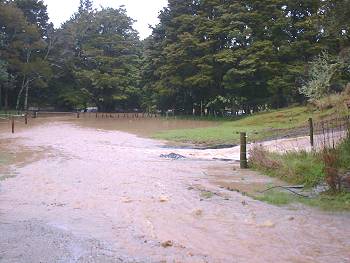 7am and light at last, with water absolutely everywhere and Abigail was wandering around with a couple of feet protruding from beneath her tail!  If there had been any sudden need to get her to the yards for assistance, there would be no way in the world we'd be able to achieve that! 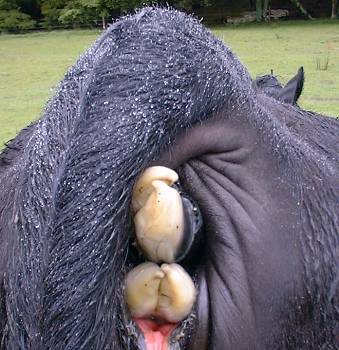 The bottoms of the hooves of the unborn calf, are covered in soft, smooth material (the white stuff, with the cute little points at the ends).  Once the calf is born and on the ground, that wears away, leaving the hard hoof behind. 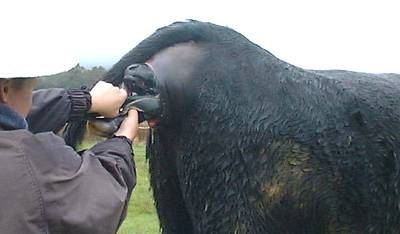 I was a bit concerned that Abigail was getting pretty tired after so long, so I attempted to help a bit at one point, just holding the calf in between contractions, but Abigail wasn't altogether happy with that.  She just carried on on her own, lying down a couple of times, but mostly standing.  At just after 9am, she popped the head out, at last, then dropped her heifer calf on top of a thistle, right next to the fence (just like her mother did last year). 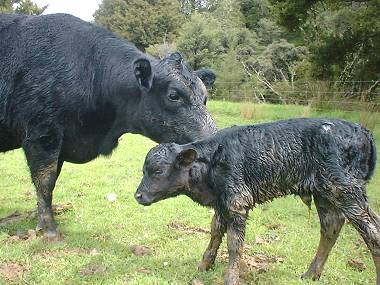 We took the scales out to weigh the calf a couple of hours later.  She weighed 29kg, 2kg heavier than Abigail was when she was born two years ago.

During the flood on Sunday morning, the water washed our pile of recently delivered metal (crushed rock) all down the driveway, so Stephan piled it back up again this afternoon, since it was rather difficult to drive over! 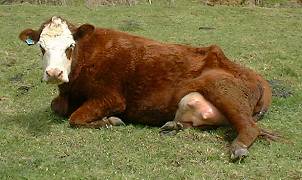 Early this morning, this silly cow, #79, lay down with her tail facing the drain which runs down one side of this paddock, and gave birth to a bull calf.  Fortunately I'd been watching her for an hour or so, so when, from the house, I saw her looking into the drain, I could guess what she'd done, so went and rescued her baby.  #79 is a grandmother - you'd just expect her to know better!

Jill and Bruce came for lunch and Jill and I went walking, visiting the cows and calves in their rather bare paddock.  As we found the whole lot of them on the right side of the river, we shifted them out of that paddock and along the lane to an area where they could graze on some longer grass. 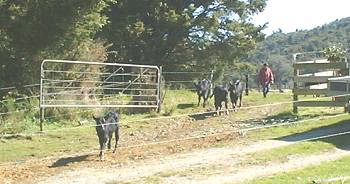 Of course one of the calves ended up in the house paddock, where she wasn't meant to be, and then somehow two others made their way back up the lane through a closed gate and electric fencing, to join that calf, when their mothers had gone on, out of their sight.  They sat there together, for hours, until around sunset their mothers came looking for them and enticed them back to the right side of the fence and took them away to the rest of the herd.  We had to go and find the third cow, who hadn't any idea where she'd left her calf.

Late last night, Isis (one of Isla's younger sisters) was starting her labour, so I went back out to check on her in the early hours of this morning and watched while she birthed her calf.  Things looked alright until the head appeared and I thought it was stuck, but then realised that it was actually coming through and out of Isis, but looked very odd.  As soon as I could see the calf's mouth, it was obvious that he was dead and the odd appearance of his head was caused by the flaccidity of his skin as it was pushed out.  I went closer to double-check by looking at the calf's eye, which was that of a very dead creature.  I gently pulled him clear of Isis, since she'd stopped pushing as soon as he was mostly born, then left her to it and went home to bed. 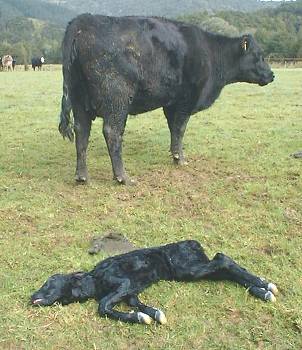 This morning, Isis had licked the calf clean and was calling to him to get up.  From the pungent, but not rotten, smell during his birth and the appearance of the fluids and the placental material which emerged as he was pushed out, I would estimate he had been dead for perhaps two to four days.  I don't know why - maybe Isis was pushed around by one of the others, maybe the placenta just failed by some chance, there is nothing obviously wrong with the calf.

Stephan and I carried him away in a crate and weighed him.  Had he not been a stud calf, I would have left him there until his mother had worked out that he really wasn't going anywhere, but he was quite heavy, so we didn't take him back to her again.

The mob of 25 cows and their calves, had eaten all the grass out at the front, where they'd spent the night and much of the day, so we gave them all some more lane-walking practice!

Naturally that one calf pictured went through the fence, but he very sensibly went back through again when I encouraged him to do so.  All was going wonderfully well, until another calf stumbled over a tiny blackberry bush and leapt through the fence and then wouldn't go back and tore off around the paddock in a most inconvenient manner.  After setting up the gates ahead of the cows, Stephan came back and we managed to manoeuvre the silly thing out through the gate and then had to do the same thing at the end of the next section of lane and paddock, with a whole group of calves!

Calves are quite difficult to move when they're little.  If a couple of cows and their calves were quietly walking up the lane, the calves would just trot along beside their mothers and quite probably go through the gateways with no problem either.  But when there are a larger number of animals, the cows lose track of where their calves are, so some will keep turning back to try and find them, others will just go off ahead with no regard for the calling babies at the back of the mob, so it all gets very confused.  We turn off the electric fences in the lanes when the calves are very young, because adding electric "frights" to this situation just makes everything much more complicated, since a calf who goes under a wire and gets a shock, generally won't go back under it again to where it is supposed to be.

Once that was all sorted out, I headed for the back of the farm to check on the young stock who are out in the biggest of the back paddocks.  It's a lovely place to walk, with views in all sorts of interesting directions and I discovered some new trees I hadn't spotted before.

There is a Clematis vine at the top of the paddock, the sight of which made the walk up the hill well worth while! 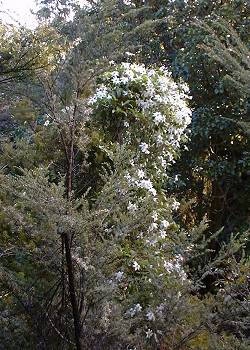 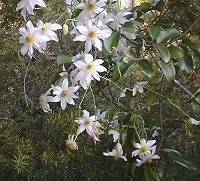 Most New Zealand native trees and plants have tiny, almost unnoticeable flowers, so this profusion of perfection is a delight to behold.

On the way home again, for those who are following their progress, I took a photo of Isla and her boy, although he was far too busy to pose nicely for the picture. 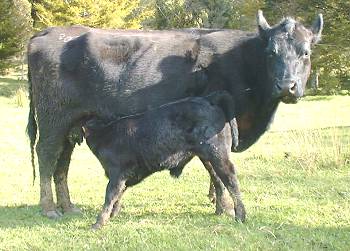 I suppose at some point I could unplait Isla's tail.  I tied it up one day about a week before she calved and it's stayed that way since.

On my way home again, I watched the third calf for today being born, heifers #360 and #341 both having heifer calves this afternoon.  Now there are only six left to calve.

#14 stood around being odd for most of the morning and during the afternoon eventually got on with her labour.  I was determined to watch her, since her calf last year was dead and I wanted to ensure (as far as possible) that everything went well this time. 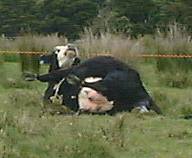 #14 lay down several times with feet sticking out the end of her body....

and then there was this guy, with the same...

We considered, while lying out in our field, all those people we know, as well as those we don't, who spend their days in offices, commuting to and from work in throngs of cars and people and we felt, despite the deaths and other challenges in our lives, very fortunate.

And then, very suddenly, there was another live baby... 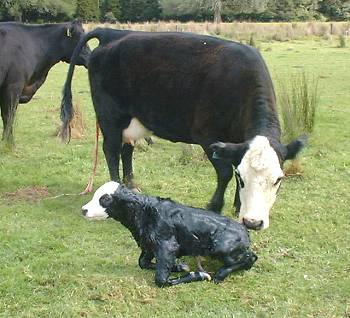 He wasn't waiting around to be cleaned up, either, almost instantly trying to get to his feet, flopping about and before we'd even reached the gate out of the paddock, he was standing.

At the end of the week, this is the best sort of fence post to have on a farm.... 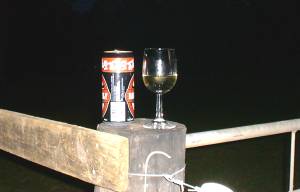 It wasn't quite as dark as this appears, and wandering across the paddocks at dusk, watching the animals doing their evening thing, listening to the birds, is just lovely.