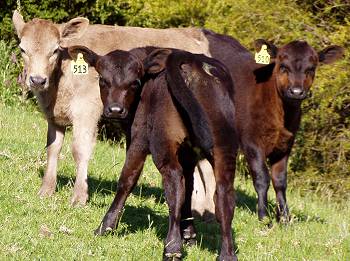 Thankfully calves don't seem to discriminate on colour, or little 516 might be quite lonely!

The tagged calves and their mothers are over the road on the hill paddock at the moment, having a lovely afternoon in the sunshine.

The young heifers are looking lovely!  It's looking likely that they'll all be big enough for mating this year and I'm carefully considering the cull list from the cow mob to make room for them in next year's breeding herd.

There are four or five cows to go for age and soundness reasons and bearing in mind a probable four or five cows not getting in calf during mating, there could be space for them without me having to make any really difficult decisions.

This year we've 45 cows in the breeding herd, but I'm aiming for a herd of 50 each year.  Because the herd's breeding has improved so much as I've brought the younger animals in, every year from now on I'll be keeping a reduced number of youngsters as replacements for cows culled from the mob.  That will mean there are less "unproductive" animals on the farm, so more room for breeding cows.  Those young animals which are only growing, are now doing so for half the time they previously were - mating at fifteen months and calving at two years means that they join the breeding herd a year earlier than if they're not mated until after they're two.  Having successfully calved the two-year-olds this year and also managed to grow the yearlings to good mating weights, I think this may be able to become our general management policy.  It will always depend on the climate from year to year, but there is flexibility in being able to simply not mate some or all of the yearlings in any year if they're not ready. 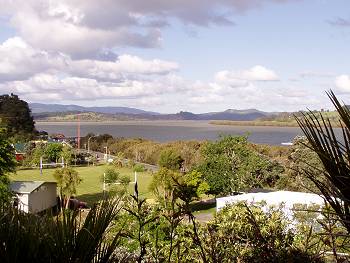 Jill, my mother, and Bruce have been living in Kohukohu on the northern shore of the Hokianga Harbour for the last few years, but have now decided to sell and move to Whangarei, where they've actually been living during this last year while Jill works there.  I thought it would be nice for us to go and have a last meal with them in their cottage, so we went.

It will be strange not to have that connection with Kohukohu any more. 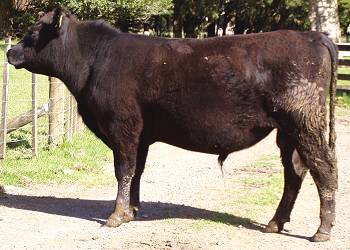 We've sold two more of the yearling bulls, so they went off today to their new home.  I washed Aidan 27's tail after this photograph, because he's become so daggy around his rear end, and he looked much better for it!

Aidan (at left) is going off to be a yearling-heifer sire and #29 (below) has a slightly higher birthweight EBV, so will be used over cows.  #29 has been through a bit of an awkward appearance phase, but is just starting to look really good again! 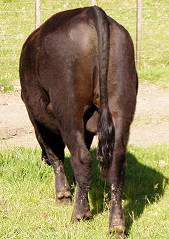 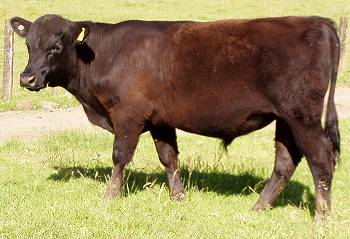 While I was out working with the bulls, Robyn (who has bought the bulls and earlier in the year bought the empty cows) left a telephone message saying she'd just watched one of those "empty" cows give birth to a lovely heifer calf!  Checking the records from when Liz did the pregnancy testing, I see that she scanned her, then also manually palpated her and on both checks judged her empty and by then she would have been ten and a half weeks pregnant.  Goodness knows where she was hiding that baby at the time.

It's a disappointment for me to know that I sold a cow which ought to have stayed in my herd, but I shall comfort myself with the knowledge that I've been instrumental in someone else's very good fortune.  After all, if any of the stud cows I bought from Takou Bay the other year had then produced an unexpected calf, I'd have been rather pleased. 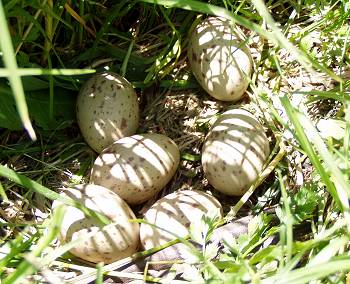 Looking at the young heifers in the Road Flat paddock this afternoon, I spotted a Pukeko sneaking off through the grass, then, as I came closer to where I'd seen it, another suddenly burst out of the grass and flapped away.  This is their nest. 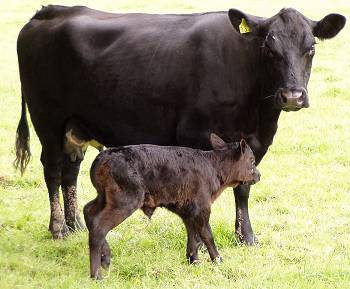 Two cows had their calves today, the first being Onix, pictured with her new-born heifer.  Onix is Issa's cow and has her own (not updated for ages) page.

The next cow was 393 who I saw heading for a swampy corner of the paddock when I was watching from the house, after noticing earlier in the afternoon that she was looking rather like she might be in early labour.  I went over to the paddock and shut her out of the difficult area she'd chosen, since it was a bad choice for calving.  I let her into the neighbouring paddock and she walked to the far end, obviously wanting to be completely alone.  Once she'd calved, I let the others into the new paddock with her.

Around this time last year, I received notice that the Women's Studies Association NZ was to have it's biennial conference, so took that into consideration when planning my cattle mating dates.  Obviously I miscalculated slightly, since there are two cows still to calve, but I'm off for the weekend, leaving Stephan in charge of the cows.

The Women's Studies Association (WSA) is mostly an academic-based organisation, drawing most of its membership from staff of the Women's Studies departments of the Universities, or students within those departments, but there are also a number of members like myself, who are feminists in the community, often tied up in feminist-based community work.  I joined when I first did the Certificate in Women's Studies through the Continuing Education Department at the University of Auckland and have remained a member ever since, despite not doing any Women's Studies at University itself.  I remain a member because it is the only staunchly feminist group around and because I therefore get to stay in contact with women of like mind - and occasionally to meet up with a great number of them together at the conferences.  If you've ever said "I'm not a feminist, but ..." and you think you might be ready to leave out the "not" and the "but" then maybe the organisation would interest you too.  Feel free to get in touch if you'd like to know more!  The WSA website is at www.wsanz.org.nz.