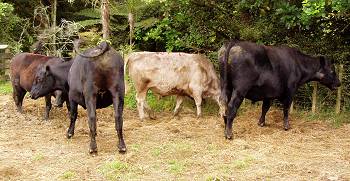 The four steers due to go to the works went today - although they almost got to stay here for a bit longer!  After appearing reasonably quiet when we brought them from their paddock up the road to the yards, this morning, they went quite mad when the truck arrived and crashed through rails, jumped over gates, and generally carried on like wild animals, rather than the quiet cattle they really are!  Eventually, after breaking most of the loading ramp, which Stephan had to repair by tying borrowed gates across various new holes, he and the truck driver finally got them up and into the truck!

Part of the problem was that the steers are now so large and there was only the pen at the back of the smallish truck for them to travel in, and every time the first one went up, he immediately turned and came down the ramp again.  I expect there'll be a fair amount of bruising on a couple of them, something the works will not like!

And no, I don't believe they were mounting a protest at being sent to their deaths; they just didn't want to go anywhere! 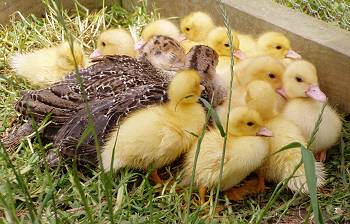 Some creatures have life well sorted! 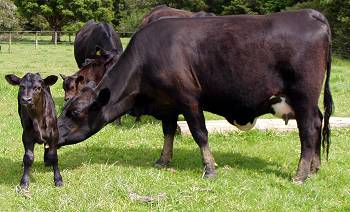 452's udder vein oedema is still very impressive!  I checked with the vet the other day that this is not something I need do anything about.  Since 452 is quite well and comfortable, we will just wait for the swelling to resolve itself. 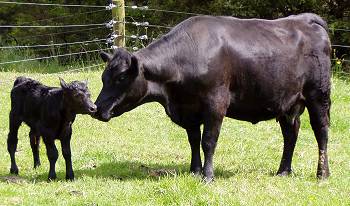 446, the last of the pregnant two-year-olds delivered her little bull calf last night, at about 9.15pm.  I am relieved that all the youngest heifers are now safely delivered of their calves and have thus proven Arran 20 to be a good bull for yearling heifer use.  Arran is still not too heavy to use with the yearlings again this year - and would be my preference, since many of the low birth-weight insemination bulls I've used have produced much less impressive calves! 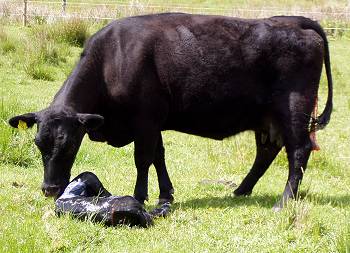 Virago Quanda 09 produced her second bull calf this morning.  This one's sire is Vermilion Dateline, a bull I've not used before, so I will watch the calf with interest.  Quanda is mother to #25, the bull I sold four weeks ago. 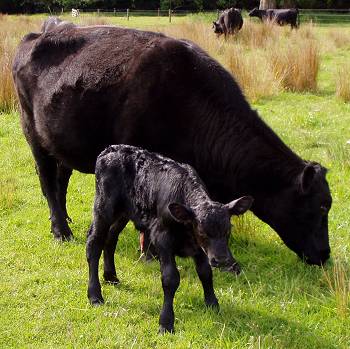 Late last night I went out for the last check on the calving cows and discovered Isis in labour.  I waited out there for over two hours, for her to get on with the job.  Fortunately it was a pleasantly still night, and sitting under one of the big Puriri trees, leaning back against the trunk, was quite pleasant in the starlight.  At 12.45am, she finally delivered her bull calf.  I wanted to watch Isis calving, since she delivered her first calf dead for some reason.  She's since had a heifer and this bull, so whatever the problem the first time, it hasn't been repeated.

Today I brought the first-born mob of calves in to the yards and weighed them all, painted marks on their bodies for identification and then, taking the weighing platform out of the race, put all the calves through again in groups for vaccination.  Then Stephan put rubber rings on all the scrota and tags in one ear each, right for heifers and left for steers, according to the paint-marks on their sides.  My intention was that the steers would number 491 to 504 and the heifers number in order of birth from 505, but I mistook one of the marks and now a heifer has a steer number and there'll have to be a steer with a later number - and of course there are still calves to be born yet anyway, so the whole plan was a little shaky!  Ultimately it doesn't matter what numbers they get, but being able to compare sizes of calves in the paddock by knowing the order of their births from the tag numbers is quite handy.

They spent the night in the paddock near our house so they didn't have to walk very far from the yards, since castration causes the newly steered calves some pain for a while after the rings are applied.