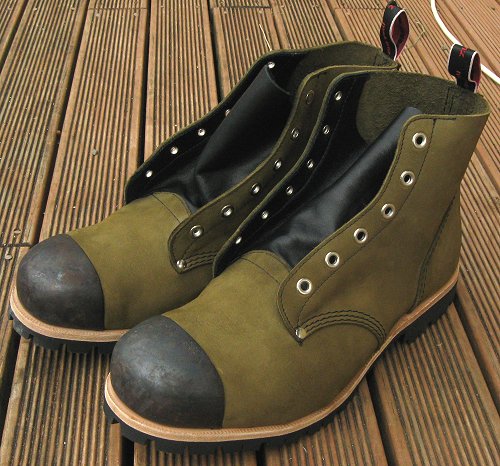 Stephan's newest boots, from [a vendor we will no longer use due to subsequent unsatisfactory service].  His tramping/trapping boots have been so comfortable (although they're currently back with [the vendor] for a repair) that Stephan opted to have a safety-toe boot made as well, for his chainsaw work around the farm, in particular. 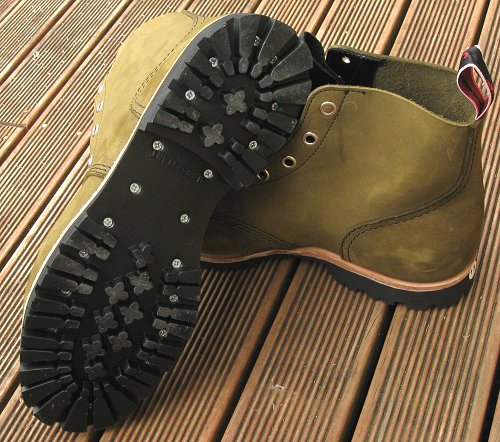 Two days after this photo, he wore them all day in the bush and came home with comfortable feet: pretty good going for a new pair of boots! 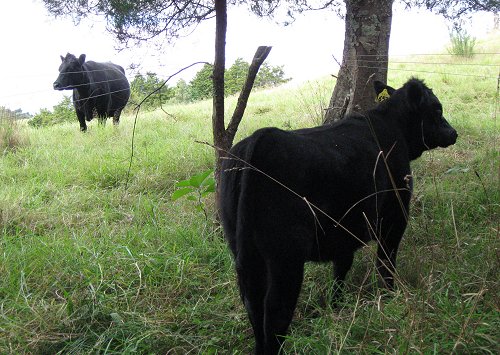 Yesterday when I checked the cows and calves over the road, I found this calf, 653, in the fenced bush reserve.  I left her there, thinking she'd find her way out again, and hopefully receive a shock from the wire to teach her the lesson she's obviously missed about electric fences.  But perhaps she'd already received too good a lesson on her way in, because this evening she was still there.

I was surprised, having heard no calling from either calf or cow.  Her mother, 488, appeared to have remained nearby while her daughter was trapped.  I wonder if she went down the hill for water? 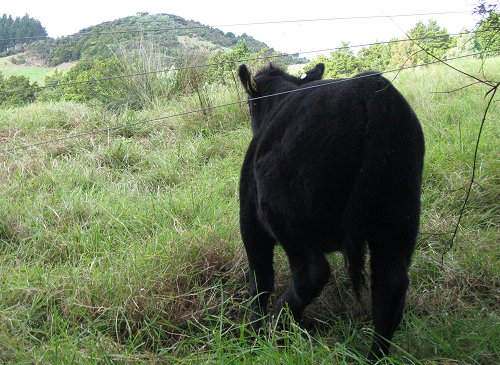 Finding a forked branch of appropriate height (pruned from one of the trees when Stephan constructed this reserve fence), I propped the fence wires up to provide an escape route for the calf, and quietly persuaded her to go through it towards her mother.

The fence was "dead" at the time because this section is fed by a connection I'd left open on entering the paddock. 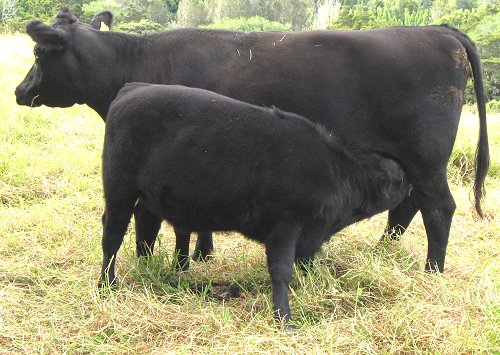 The calf went straight to her delayed dinner/breakfast/lunch and stayed there for some time!

The calf, if she has continued her measured growth-rate over the last month, should now weigh around 220kg (about 480lbs).  She's five months old.

488 was born in 2004.  It pains me now to look back at the pictures of my thin cows in years past.  It seems to be quite common for people to become so accustomed to the state of their animals, that they sometimes do not see how unsatisfactory that state might be.  Now I think I've become so aware of that tendency that I'm suspicious even about the cow in this picture, and see her as slightly too thin!  But she's probably about right, four fifths of the way through her lactation. 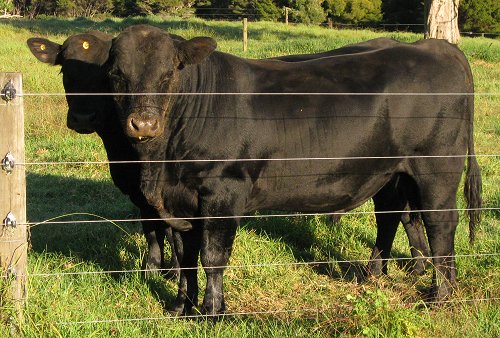 A couple of days ago I tried out the online booking system for the nearest meat works for bull #89 (in the foreground).  I had a couple of nice emails from someone at the other end, but nothing further yet.  Normally I'd phone my stock agent, but as it's the busy weaner fair period, thought I'd try this method on this occasion. 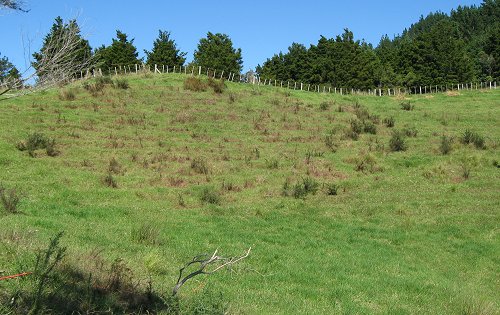 Stephan went out with the tractor to the back of the farm and sprayed some gorse.

The larger dark green plants are gorse and so are the smaller things you can't see as easily, with what is probably the dye-loaded herbicide patches around them where they've been sprayed.

I sent the new camera back to its vendor on Friday, so this week is a bit light on photos.  I have to share Stephan's camera with him, and he's become quite attached to it!

Another meeting, another trip to town.  When I eventually arrived home, it was to find our house now looking not unlike the Warkworth Satellite Station!  I've had a satellite Broadband connection installed, since that's our only faster internet connection option.  It's very expensive, but it is to be paid for by a job I have recently contracted to do, updating and developing the Kaitaia Vets website.  It is still in its infancy in terms of content, and has a nasty "content management system" through which I have to work, but as the internet face of the vet club to which I belong, it's an interesting project.

I've been waiting for Abigail to come back on heat again, since seeing her cycling three weeks ago.  Just after noon she started calling and looking toward the bull a couple of paddocks away across the flats.  She spent hours pacing around, yelling, looking longingly towards the bull, or across the stream to the three young heifers over on Jane's place.  Neither Imagen nor her son seemed particularly interested in Abigail, so I brought the three heifers back from Jane's and put them in the House Paddock with the two adults and calves.  I needed some keen young stock with Abigail to show whether or not she was in "standing heat", to give me the best chance of correctly calculating the best time to inseminate her.  Why the little bull wasn't interested, I'm not sure; perhaps she simply wasn't properly on heat at that stage.

We fetched the semen bank a couple of nights ago knowing that Abigail would be on heat again this week, so I could inseminate her instead of putting her back with the bull.  Her calf will be born much later than the others, but with her short gestation and calves' fast growth rates, it may not make too much difference.

Abigail was still standing for the heifers to mount her at 10pm and my past records tell me she has a long standing heat, so it will be appropriate to inseminate her early in the morning.

After bringing the cows and calves from the hill paddock over the road, I checked them as they grazed the Pig Paddock - a good place to bring them from the hill, in case there are any late-comers, who would then be drawn to the gateway by the cattle just across the road.  Curly's steer calf, who suffered so horribly from Coccidia several weeks ago, was sitting down looking not quite right, and as I watched, he produced a blood-tinged pile of poo.  He looked likely to remain lying where he was, so I quickly walked back to the house to fetch a sample pottle and a tea-spoon and collected a bit of it for testing.  I labelled it and put it in the fridge for the night and will take it to the vet in the morning.

My entire insemination season started and ended this morning!  (Assuming I was as successful as usual - I'll have to decide if I'll give Abigail another go in three weeks if this one doesn't work.)

Abigail was still obviously on heat this morning, so while I'd got up really early to do her first thing if necessary, the fact that she was still in standing heat meant the timing wasn't immediately critical.  After some breakfast we walked her and a couple of others in to the yards and I gave her a shot of Schurrtop Reality X723, sire of the three lovely bulls currently on the farm.

Curly's calf still looked uncomfortable this morning, so we drafted him and his mother out of the large mob as they headed out onto the farm.  I may need to treat him, so best he's nearby.

Then off to town for a Kaitaia Vets Board meeting.  While there, I consulted Nathan about the sample and whether or not I should treat the calf and if so, with what?  He prescribed another course of Amphoprim, and we sent the sample off to be tested.

In the evening we walked the calf to the yards (with his mother and a couple of the others) and gave him his first injection.  Poor calf.  We both stroked and scratched him after the injections (I divided it between two sites in his neck) so that he'd associate some pleasure with the yards.

I wrote a letter to the Angus Association, resigning my membership.  It has taken some time to do this, not because I was unclear about my decision, but because it was a sad step, personally, to have had to take.  I said in my letter that "I no longer wish to be associated with a body whose ethical standards are at such variance with my own.  That the Council condones the sale by some members of breeding bulls which carry lethal genetic conditions, in many cases with no disclosure in sales catalogues, is unacceptable, and in my view contrary to the organisation's constitution and aims.  Cattle breeders in my own community have been unknowingly duped by this practice and I am no longer comfortable with any tie to Angus NZ."