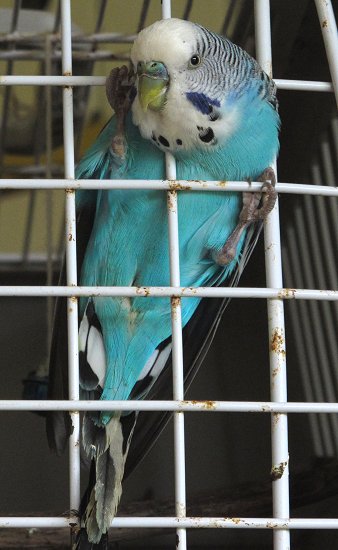 Budgie doesn't seem so happy about being confined to a cage. 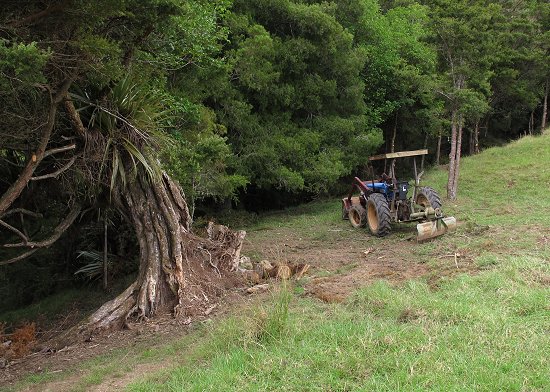 Stephan spent most of his day over the road, clearing the proposed fence-line up the side of the western gully, which will subdivide the paddock into portions of one and two thirds.  He'll need to construct a fence up the other side of the same gully to keep the cattle out of it and to protect the trees which grow on the steep slopes and in a triangle of bush at the top. 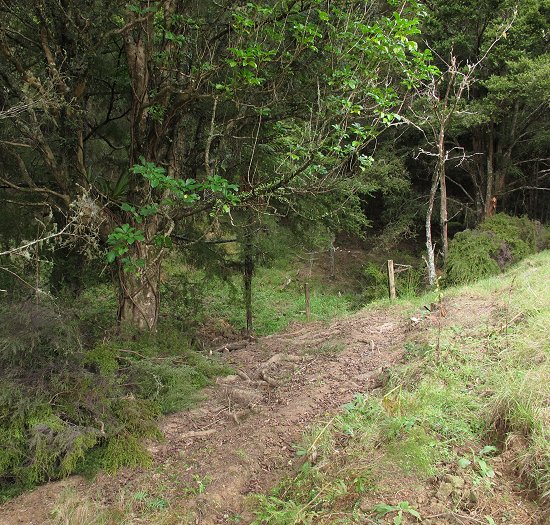 Neither of us had really noticed this relatively young Puriri before, because it was surrounded by Totara.  The cattle were in the habit of pushing their way through the Totara trees, which took them over the up-hill roots of the Puriri and we'll need to take the fence out from the tree enough to properly protect those roots from now on. 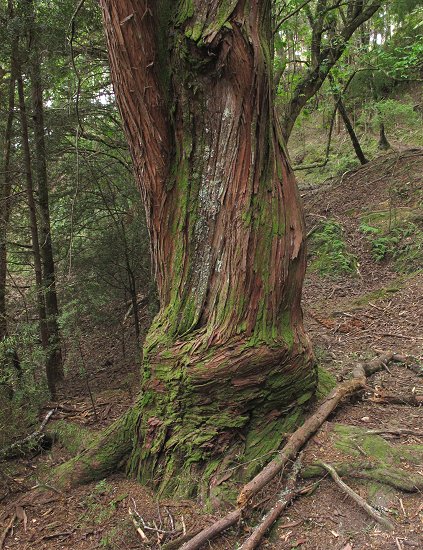 Up the hill a little further we found another couple of Puriri and to the right, this interesting looking Totara, with a twisted base.  Totara trees don't appear to suffer much from the presence of cattle and also grow like weeds here, so we'll take the fence between the Puriri and this tree, clearing the smaller scrub from the slope, which will allow grass to grow again there.

These conservation fencing jobs can be quite tricky, but electric fencing makes them entirely possible.  It would be a huge job to create post and batten six-wire fencing through here, because so many more posts would need to be hand-dug into the hill.  An electric three-wire fence requires about a quarter of the posts and works well for the purpose, as long as the fence is live. 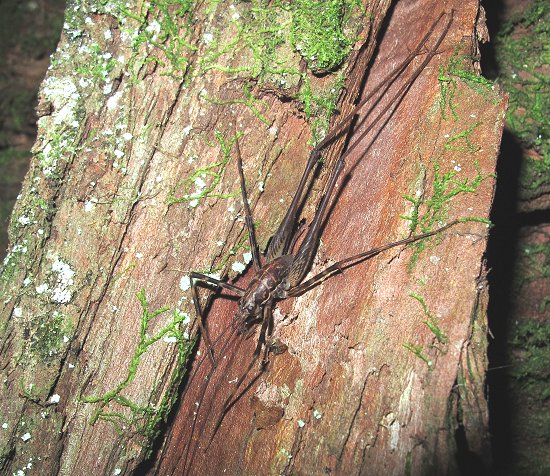 I lifted a bit of loose bark on the side of the Totara tree (it comes off it huge strips) and found this lovely Weta. 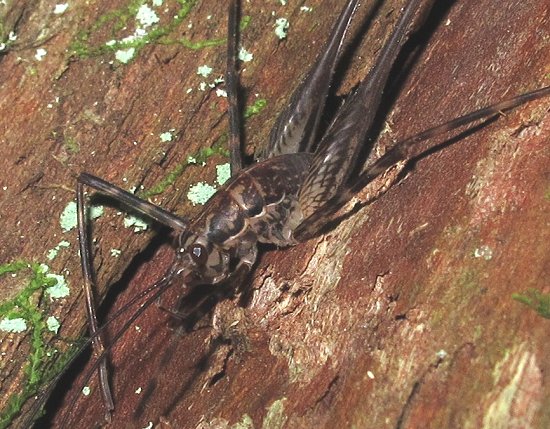 The patterns on its body and thighs were very beautiful and seemed a little different from the usual appearance of these insects. 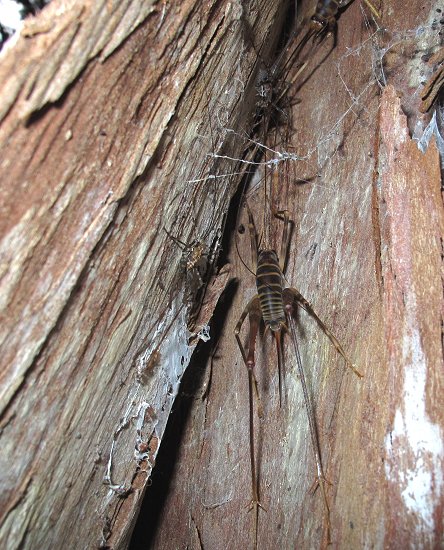 Behind another flap of bark I found a whole family of Weta, and had to let the bark back to its original position very carefully to avoid hurting them as I did so. 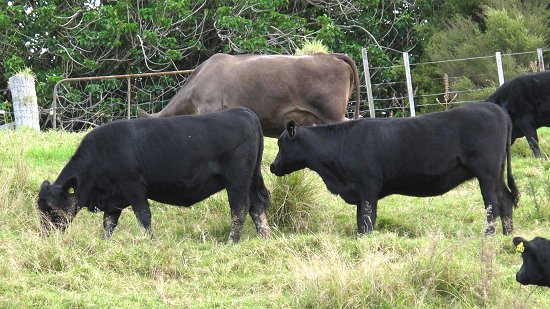 The two heifers in the foreground in this picture are 657 and Dexie 101.  It looks obvious at this stage that 657, on the left, is the superior animal.  I wonder how they will look as cows? 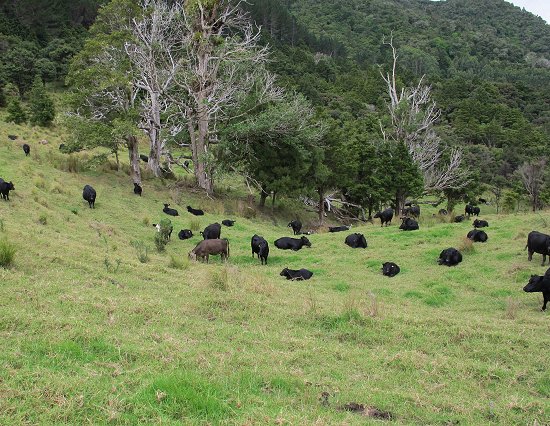 I think the cows like this paddock quite a lot, with so many nice sheltered places to rest.  After checking that everyone was safely present, I led them to the gate (around to the right of the picture) and they went into some long grass at the top of the PW.

At some stage we'll fence off the trees in the centre, which may save the last of the surviving Puriri trees there.  Most of the damage has already been done and the two or three trees which were most at risk from the cattle have already died.  It took me a while to realise that the cattle were causing harm to the trees, and I can't remember what state these ones were in when I came here.

Another day in Whangarei.  I made an appointment to go and look at one of the Retirement Villages there, to make a comparison with my sisters' preferred option of having Jill go to Auckland.  Stephan decided he could even live there, in another decade or two! 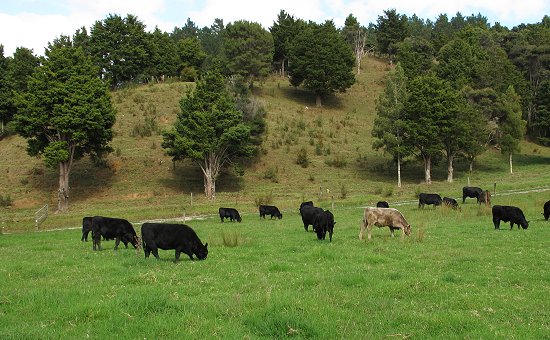 Gorse grows quickly and all those plants on the hillside in the PW have now been sprayed.  Last year they missed out. 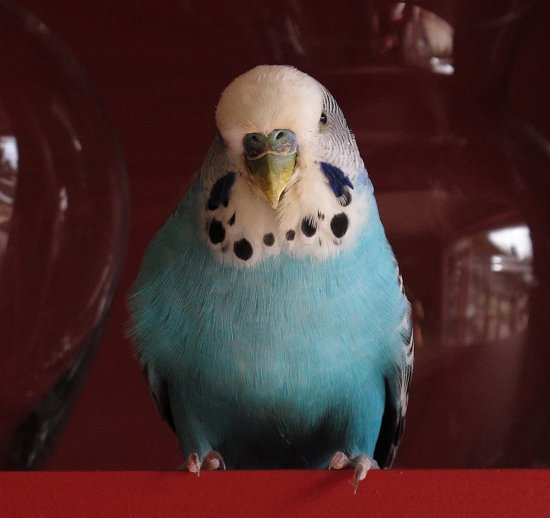 I thought I'd better find out a bit more about budgies, and read that they should be allowed to fly around a bit each day, so I let the bird out and he had a lovely time.  It took him a few minutes to work out where the windows were, and then he flew around and across the room repeatedly, very happily. 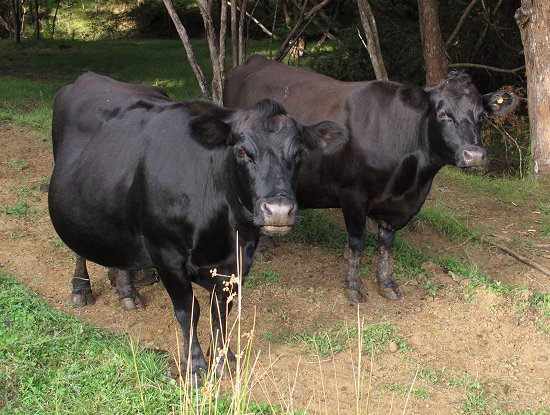 I had, until writing this, forgotten that 486 was 348's daughter, thinking she was instead of the old Jersey 82 family.  The Jersey appearance is really strong in these two, and keeps coming through in their calves, which is not what I want in my Angus herd.  I like both cows very much, but this year I have a number of lovely heifers to find room for in the herd, and I'm thinking that 542 may have to go on the truck with her mother, come weaning. 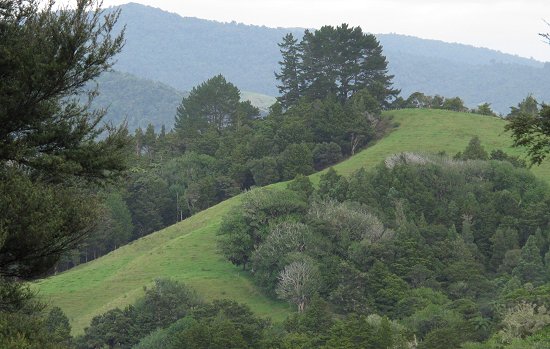 It's harder to see than I hoped, but if you dropped a line from the right-hand edge of the pine trees on top of the hill, it would point to the felled trees where Stephan has been working to prepare the gully fenceline.  The new fence will turn in the trees, to ensure we don't lose the use of the grass at the top of the hill. 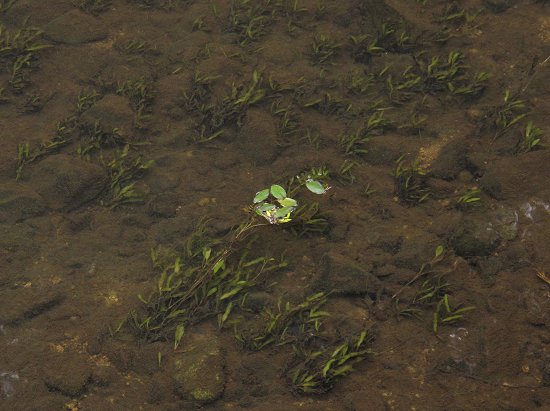 These are the same species as the plant now growing in our pond, Potamogeton cheesemanii.  It grows in any depth of water, from a few inches and running, to still and up to eight metres.  This part of the stream runs through the Frog Paddock, just a few metres from the top of the Windmill Paddock. 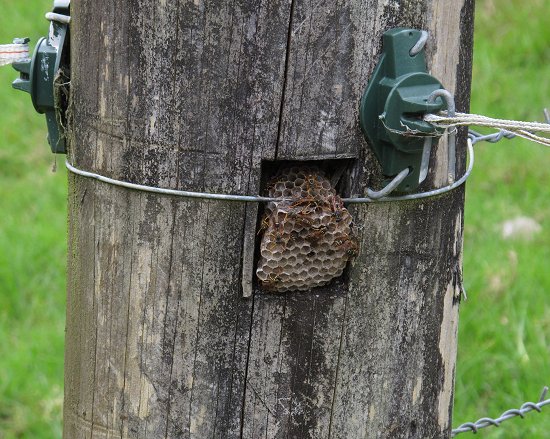 I nearly got too close to this wasp nest as I was shutting the gate into the PW.

It's a very waspy season!  The house is constantly buzzing with the large German wasp and they're still all over the place harvesting wood pulp from any wooden surface.

I spent most of the day setting up a new computer.  The old one had become frustratingly slow as I tried to do more than it was capable of and when L-J and Fran were here, L-J told me how much she likes building computers and offered to make me one.  I now have a whiz-bang fast machine with mirror hard drives to protect my data, 8GB of RAM and the capacity to upgrade and add to most of its components should I ever need to.

I'd forgotten how long it takes to transfer all of one's working programmes and data. 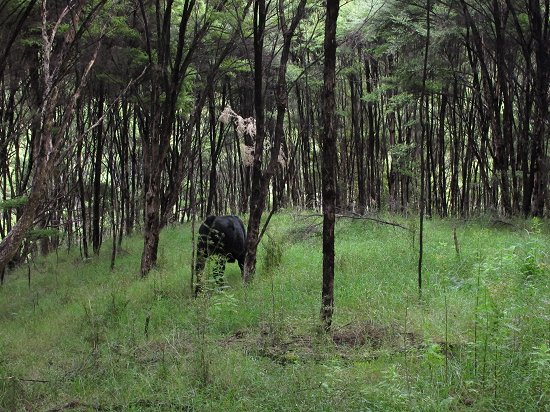 I called all of the cattle to the Back Barn gate, but couldn't find 679 amongst them.  He's the calf which always ends up left behind because he wanders off alone.  I went looking for him, and found him wandering quietly amongst some scrubby trees, grazing, completely ignoring my calls and those of the rest of the mob.

These shady areas don't get grazed down much, because the grass isn't terribly tasty for the cattle.  We'll fell the trees in this area sometime over the next couple of years, for firewood and to clear it for better grass.  It was once all clear, but the Manuka grows like a weed. 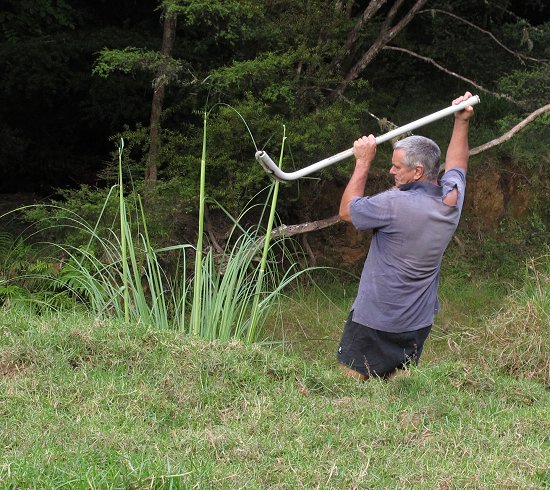 Pampas plants have appeared in several places around the farm.  It's not surprising, since they grow amongst the gum trees in the timber company's plantation on our boundary, but I intend that we should control them here.  We used to call it cutty-grass when we were children, because it cuts skin very painfully if you push past it.  It is only in recent years that I discovered these plants are not the native Toetoe I always presumed, but an introduced species from South America which is an invasive weed in this part of the country.
The upright thick stems on this plant would soon produce the characteristic feathery head, which children like to pick and play with.