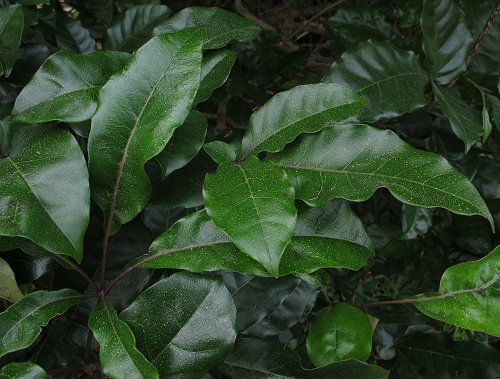 Everywhere there is Pine tree pollen.  In Whangarei it was all over the cars around town, here it's on any surface, anywhere.  It's all over the windows! 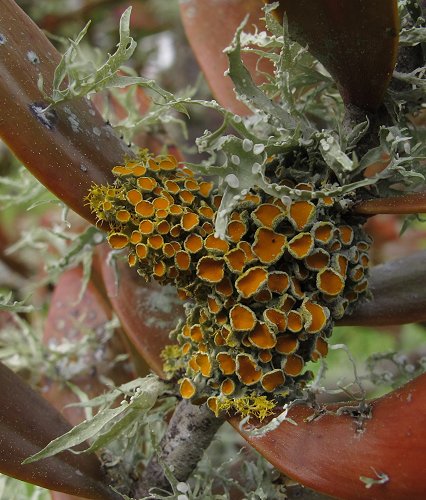 This colourful lichen is growing on a young Kauri tree in our native planting area - the leaves are the reddish-brown bits going to left and right in the picture, which measure around two inches each. 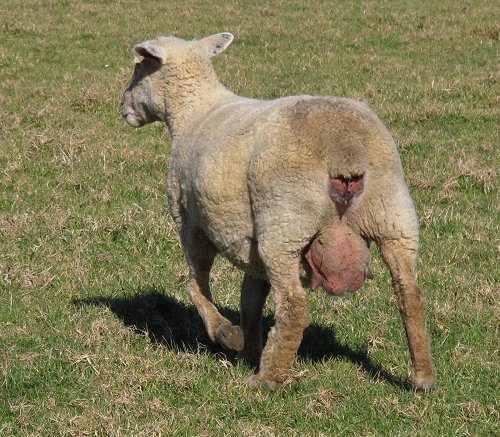 While I was away, Stephan said he'd found this ewe cast (stuck on her back), and she may have been down for more than twelve hours.  He said she was quite wobbly when she got up, but seemed otherwise ok.  This morning I went to move the ewes from the Windmill Paddock to Flat 1, so the Windmill can grow some grass for the start of calving, and found young ewe away up the top of the paddock on her own, under a tree.  That's never a good sign in a pregnant sheep.

However, she got to her feet and wobbled her way down the paddock, with me following along to keep her going in the right direction, since the other ewes had already gone to the new paddock.  Once there with them, she put her head down and ate with enthusiasm, so I think she'll be alright.  I suspect she may have some slight nerve damage from being on her back for too long, since one leg seems quite stiff.  If she keeps eating well, she'll be ok, but I'll be watching out for any signs of "sleepy sickness" (pregnancy toxaemia). 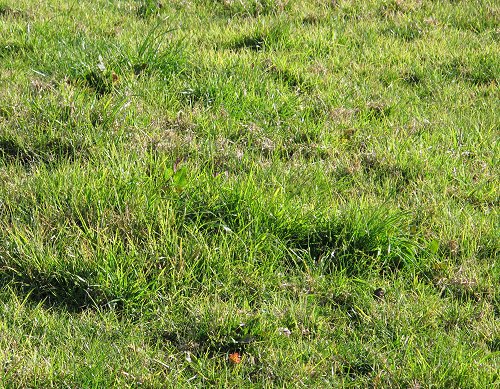 I sowed no Italian rye this year, as I probably ought to have done, but there is still a little of it showing up in the paddocks (the longest darker blades in a couple of small clumps) where I sowed it two and a half years ago.  The fact that it persists, despite two periods of drought, is remarkable.  The Kikuyu (the lighter green grass) probably shaded and saved it from too much heat and desiccation. 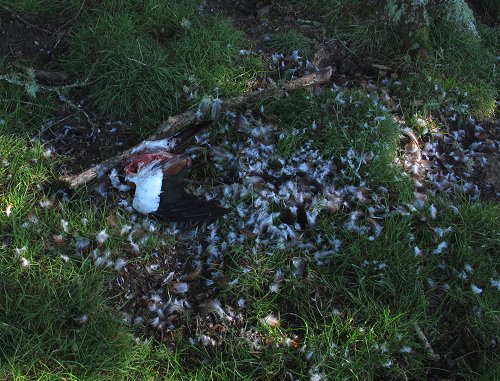 We have a new near-neighbour who does an alarming amount of shooting; I wonder if this is one of his victims?  The remains of a female Putangitangi - Paradise Duck.
She must have died here, and has since been found and partially eaten by a hawk. 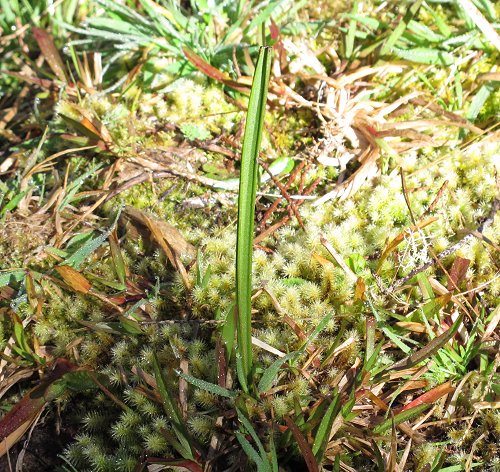 Walking out toward the Bush Flat this morning, I wandered through the Mushroom 1 Paddock with the ragwort plonking stick, and headed over toward some small flowering gorse plants, which should now die!

There's a bit of a swampy area where some water comes up out of the ground, and where there are Manuka trees are growing, the ground is harder and dry in a small area around their roots.  There grow numerous sun orchid plants.  They're far more common than I realised.  I do still think it's rather interesting that so many of the plants I've discovered are single young plants, rather than colonies of them.  It is as if the orchids have only just begun to grow in these places in the last three or four years. 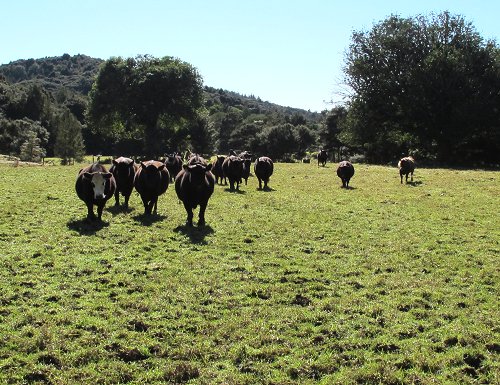 Stephan rode most of the way out on the bike as I was walking, carrying the chainsaw and safety gear.  We had a project in mind on this nice warm, calm day.

The cows are ready for a move, but I thought they'd like to help clean up after us first, so kept them waiting for a while. 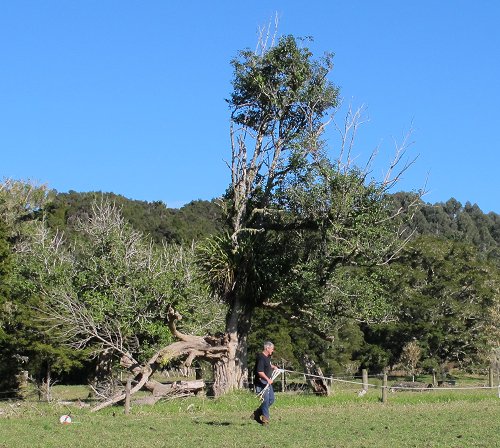 This tree has been gradually splitting apart for several years, the second part having fallen after heavy rain in December last year.

The last bit standing looks precarious; I worry that there is not enough strength in what remains of that part of the trunk to hold the weight of the heavy branches.  In case it should fall down, I had put an electric tape around the area to keep the cattle out of the danger zone.

Stephan moved the tape to exclude the cattle from the whole area while he felled the tree. 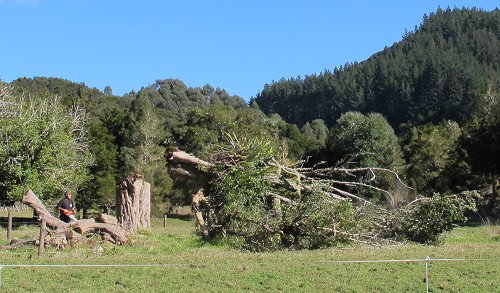 After some careful assessment and on-site planning, Stephan made a few careful cuts, before the tree twisted in a way he hadn't anticipated and trapped the bar of the new chainsaw.  He went home for a couple of wedges to bang in to release it, and then continued cutting until the tree fell, very tidily, without hitting the fenceposts.

The risks were mainly in how the head of the tree would move, when the largest branches hit the ground. 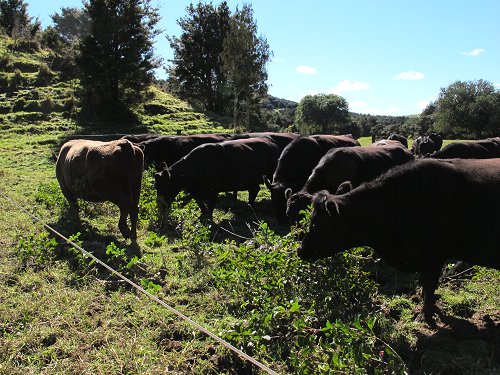 Stephan carried on cutting, gradually removing branches from the tree, and I moved the tape closer to the tree and spread the foliage out for the cows.  They like Puriri a lot, although I have observed that they prefer the younger leaves, so they wandered off after a surprisingly short browsing session, partly also because they didn't much like all the chainsaw noise. 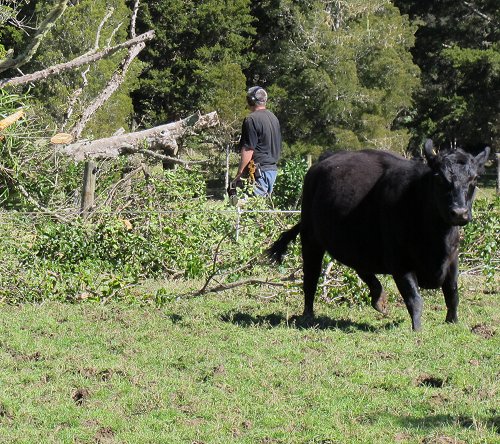 548 stayed though, until a large branch crashed to the ground and startled her. 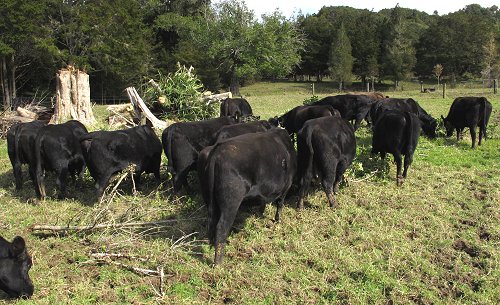 When Stephan had finished cutting, he resurrected the electric fence which was built to protect the tree.

The tree had been sprouting from the base of the trunk for some time, but that young growth had been repeatedly nibbled by animals getting in whenever the tape around the area wasn't quite tight enough.  With the permanent fence reinstated, it should be left in peace to grow again.  I expect shoots will grow from the top of the remains of the trunk as well. 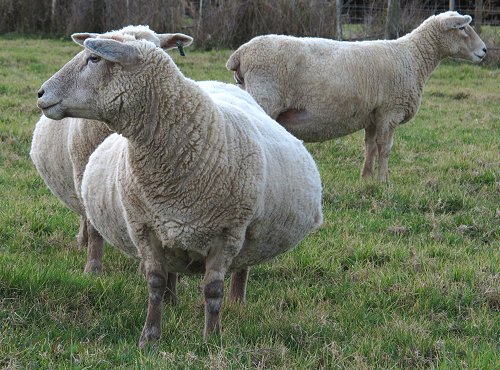 The three pregnant ewes, Dotty in the foreground.  She's such an odd shape.  I think she's probably carrying twins this year, although last year she seemed almost as wide with one.  We shall see. 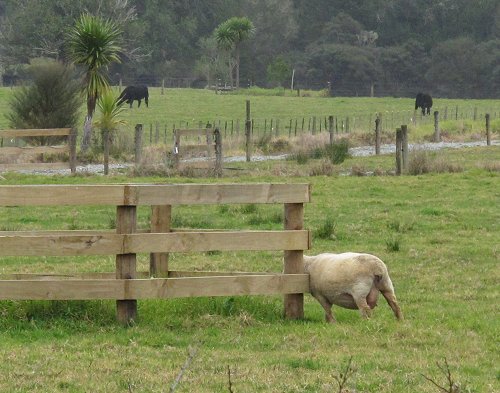 I've been watching the young ewe which was cast last week with some concern, because she has been lying down a lot.  But watching her enjoying an itching rub this afternoon, I was reassured: it takes energy to do that, and if you weren't feeling well, you (or ewe) just wouldn't bother.

We drenched the sheep today, particularly because of my worry about the young ewe, and the younger animals (last year's lambs) have never been drenched and the smaller ones are looking a bit ragged.  Fortunately we decided to weigh them all before drenching, because they were nearly all heavier than I had estimated when buying the drench, and underdrenching must be avoided!  The ram and the biggest wether consequently went without, because there wasn't enough.  Both of them look healthy enough to cope.

The three pregnant ewes also had a 5-in-1 vaccine, because they should now be two or three weeks away from lambing, and their antibody production as a result of the vaccine will give protection to their lambs.  I put raddle marks on Dotty's two daughters so I could easily identify them from a distance.  Dotty, with her extraordinary shape, can be distinguished at any distance. 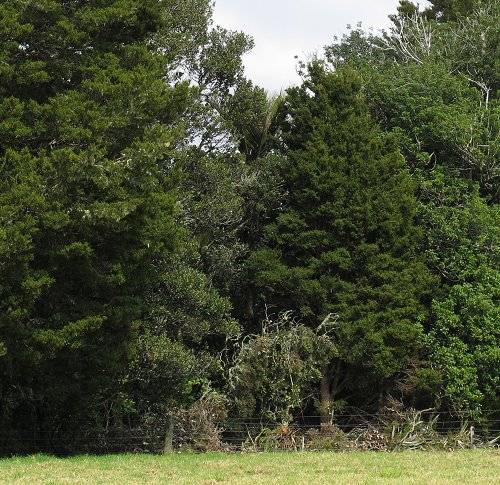 The Taraire tree which suffered so much from the drought (see April 2010), fell down sometime in the last week or so, and Stephan cut it all off the fence and tidied up, so there's hardly any sign now that it was there. 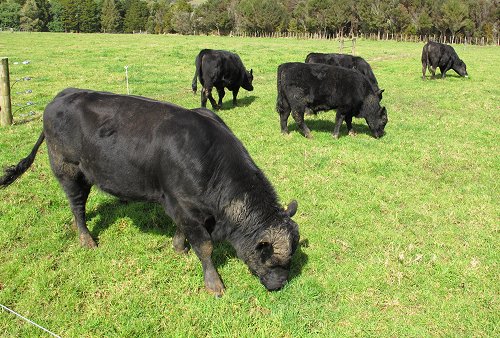 The bulls, which I drenched a month ago, are looking vastly better!  The little guys in particular had looked quite rough, but are now much cleaner around their rear ends, and generally smoother looking than they were. 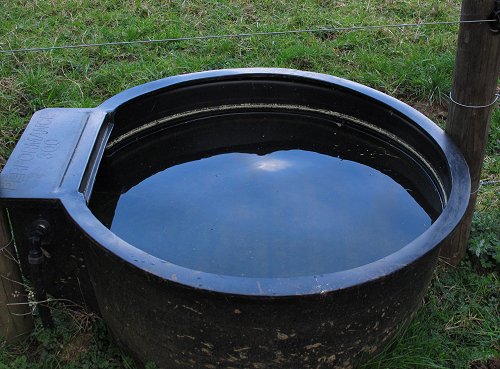 A Pine pollen tide-mark in one of the water troughs.

I went to Whangarei to do some things for and with Jill, bringing her back home with me on Friday.  In my absence, a fabulous banister rail has appeared on our stairs, to aid our guests in their perambulations to and from their accommodation.