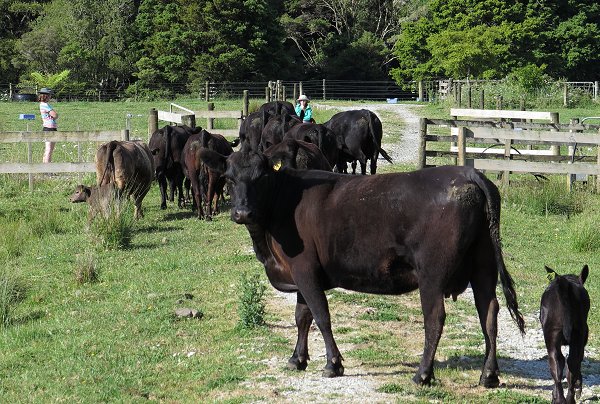 While I was supervising exams at school today (a couple of Scholarship papers, often set on Saturdays) plans were afoot for a family barbecue by the pond.  Soon after I arrived home, so did Elizabeth, William, Miriam, Sarah & Karl and the two boys, Kerehoma and Maihi.  And they brought most of the food!

Miriam and Stella came out with me to check and move some of the cattle, helpfully standing as blocking agents in the lane to stop curious calves wandering off under the spring gates in the wrong directions.  The cow looking back toward me in the picture is Dexie 101, still as alert to any danger as ever.  I hoped she'd settle down when in a larger group of cattle, but she shows no sign of doing so yet.  At least she never kicks me, although I'm always careful not to surprise her by touching her when she hasn't noticed me beside her. 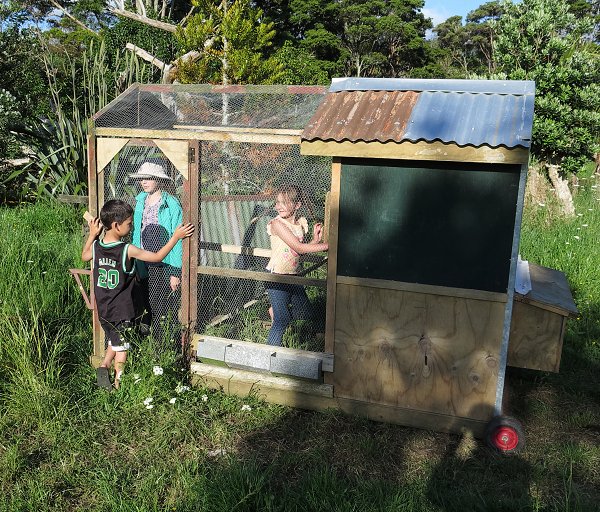 We gained a couple of new chickens.

Girls can be so nurturing when playing with younger children.  Stella also knew how to flick the catch and get out if she wanted to!  Kerehoma seemed very pleased with his catch.  I'm not sure I approve of boys locking girls in cages, really.  The other way around is of course entirely acceptable and probably sensible practice from age 13 to 25!

The younger girl is cousin Christina's daughter, Emma, who'd popped in on their way home from a birthday party up the valley. 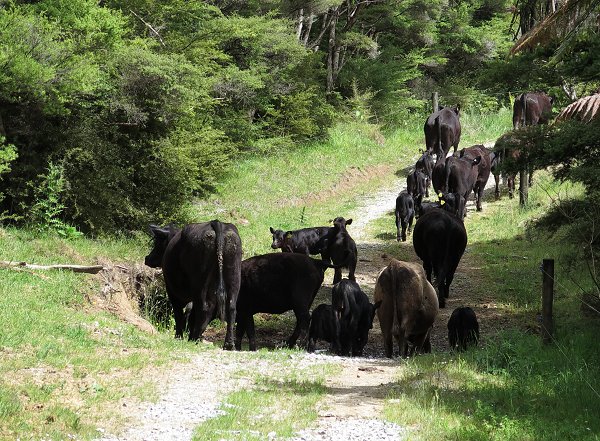 The calves were no trouble at all when crossing the stream here today.  They learn their way around their environment very quickly and well, with "river crossing literacy" being a necessary early competency.

The grass is growing like crazy all around us, at last: the 56mm of rain which fell in the first nine days of this month were just what we needed and the daily average temperature is now well over ten degrees (I'm calculating the average of the measured minimum and maximum temperatures each day). 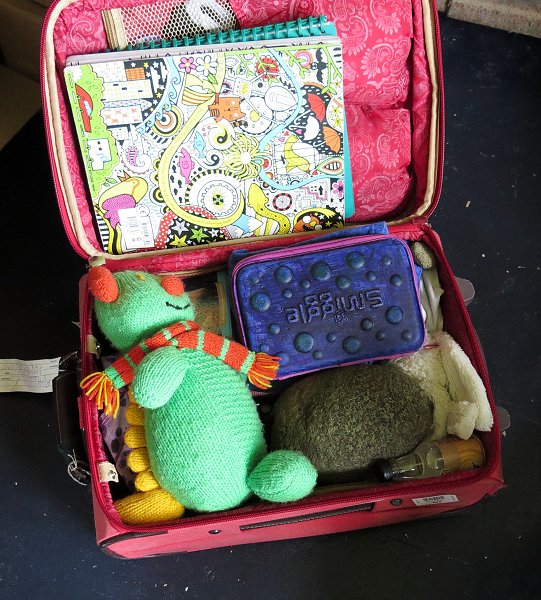 Stella packed her bag and it was several kilograms heavier than when she came up.  Opening it up revealed why: she'd decided she needed to take a dragon egg home with her, 4.5kg of rock.  I told her she'd have to leave it here to hatch.  I've seen a lot of those around and hadn't realised what they were.  Sarah told Stella there were lots of them here when she was a child.

Stella and I went up to the airport for her 3pm flight and off she went home again. 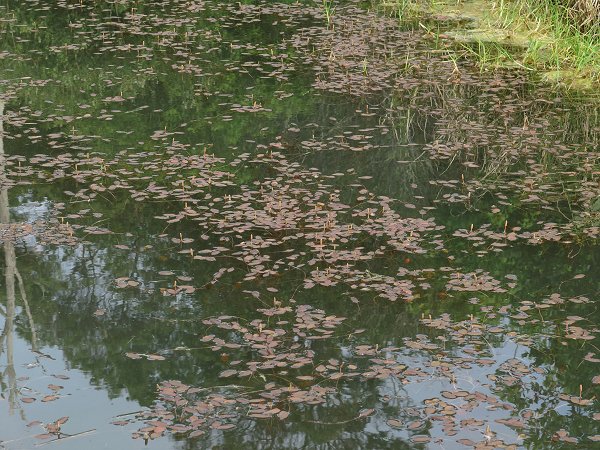 The weed in the pond has become well established, so I think some weeding will be required this year.  It's a pretty plant, with its little fruits all sticking up above the surface at present, but I suspect it won't be very comfortable to swim amongst it. 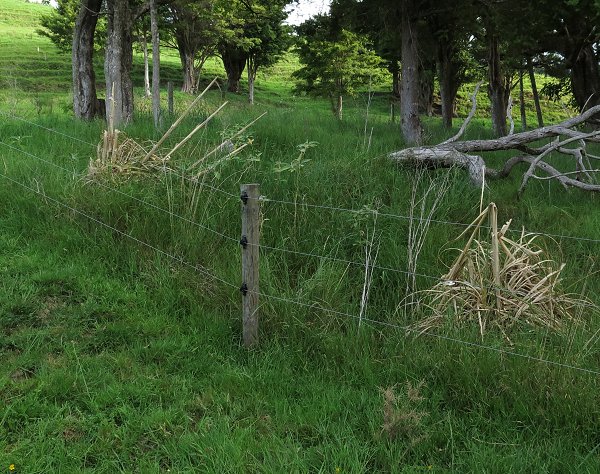 Finally the Pampas plants I wiped with Glyphosate earlier this year really do look to have succumbed to the treatment.  Back in June I wasn't quite sure. 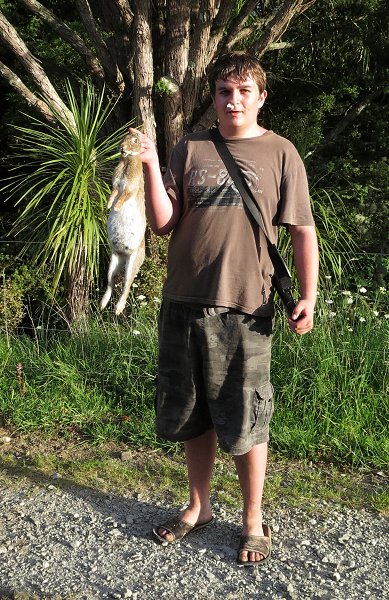 Lance bought a rifle on his 17th birthday and is about to get his licence - in the mean time it stays here in our gun cupboard and is only used under supervision.

Today he shot his first rabbit!  He'd also had a blood nose, hence the plug in his nostril, which I suppose I ought to have suggested he remove for the photo.  When his Nan arrived to pick him up, I told her he had blood all over his face from carnivorously gnawing on his kill. 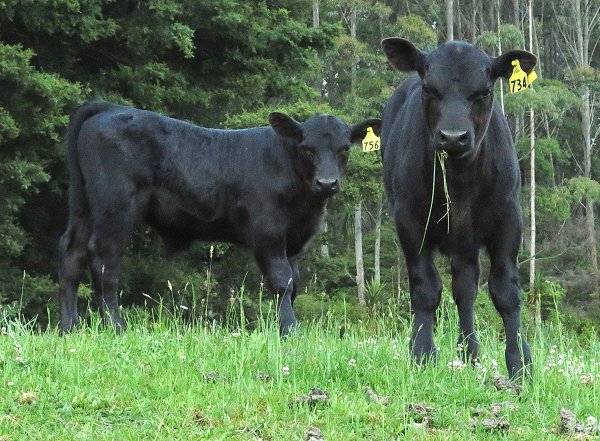 The calves have reached the age at which they start looking really good.  Those with good resource provision (well-milking mothers) put on weight and condition readily and look more and more solid and muscly as the weeks pass. 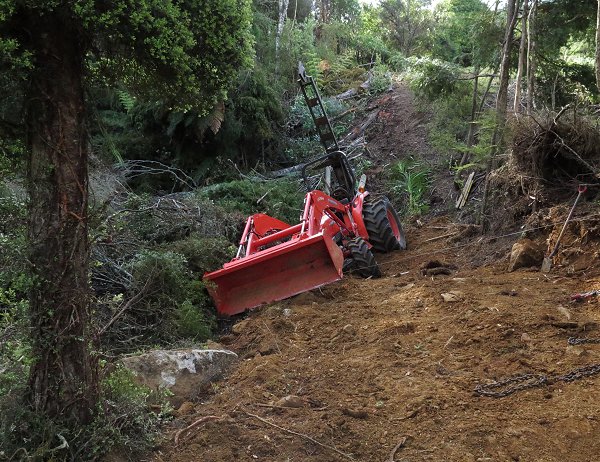 He'd been moving some earth and rocks to fill in a soft wet area where water had channelled its way along our side of the fence instead of out in the reserve and had later backed in to thump in a post ... and the tractor slid sideways off the hard bit and down into the swampy area.  In the photo it doesn't look as bad as it really was. 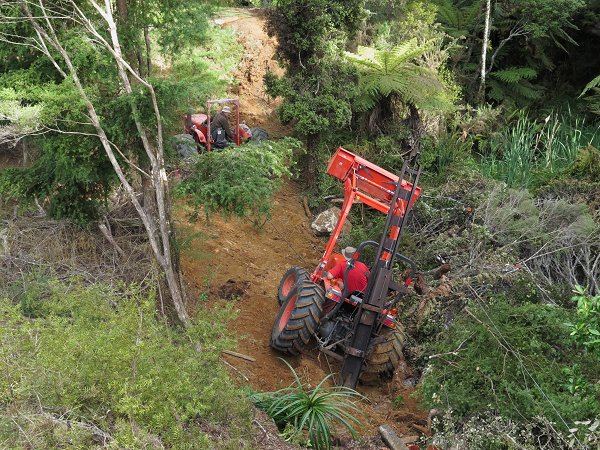 Having gone to help Brian unstick his tractor from a tricky spot in the last month, Stephan rang him to ask a slightly bigger favour, since our tractor would need another tractor to help get it out and we don't have a spare one.  Brian immediately set out and arrived within the hour and I led him out to where Stephan was waiting.

We conferred about the best way to approach the problem, because pulling the tractor straight forward would cause it to go further downhill and into the swamp and also cause it to meet a large rock which would stop any more progress in that direction.  We were also concerned that the tractor might tip to the right if the wheels ended up in an even softer spot.

Deciding on the method, Brian started to pull while Stephan sat on our tractor, but it very soon became apparent that we'd need to be pulling from up the hill as well, or our tractor was going to tip over into the swamp (even with the weight on the post thumper removed and the bucket down as low as possible).  An upended tractor in a swamp would be a whole other level of seriousness, both environmentally and financially.

Brian said he'd used one of the local towing companies in such a situation and so I rang to ask if they'd help, but they wouldn't tonight and not until Friday, if we were lucky.

I drove Brian home while Stephan made some more phone calls, trying to find someone and some method of getting the tractor out.

A sleepless night was had by some.  It rained a little and we both lay there hoping it would stop, even though what we really need right now for the pastures is some really good rain!  If it were too heavy, the water might get too high around the tractor and get in where it shouldn't.

Brian said he'd woken at four and then stayed awake, thinking, and had come up with a plan; it happened to be about the same plan Stephan had formed as he lay awake as well.  So while I went off to supervise exams, Brian and another man came over with yet another tractor and the three of them worked until they got the tractor out.  I was very pleased to receive a phone message at 11am saying all was well and no damage was done.  A huge thank you to Brian and Patrick! 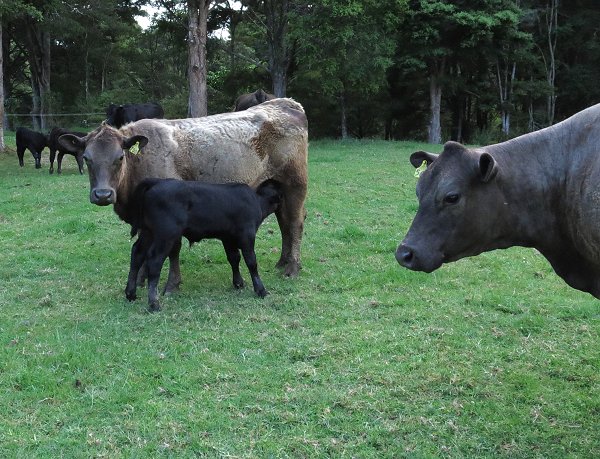 Endberly is still very thin, but her calf is doing well.  There's time for her to fatten up again, as long as we get some rain sometime soon to keep the grass growing as well as it has started to do.  That's mother, Curly, looking on. 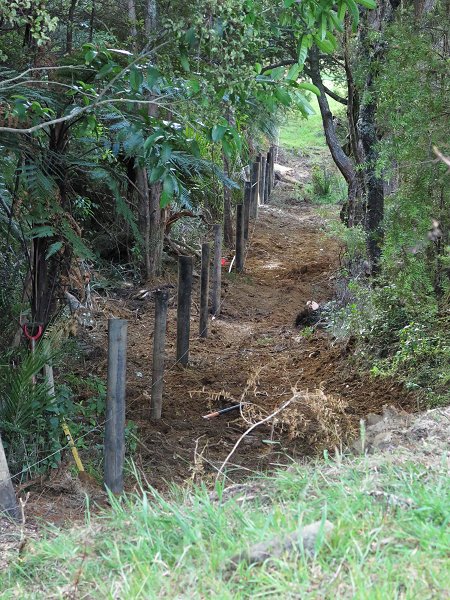 Stephan has been working hard on the boundary fence, thumping in a number of posts during today. 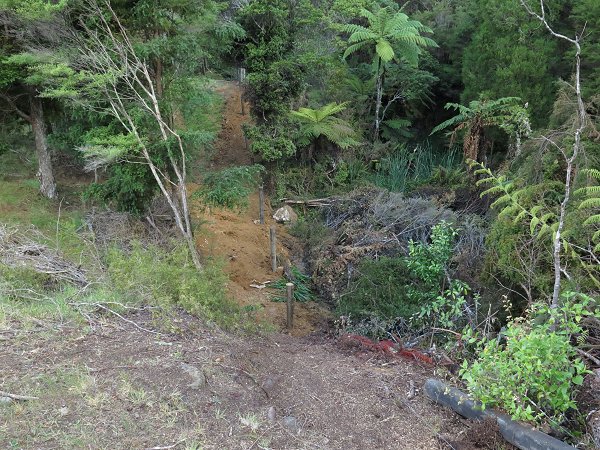 This bit looks much better without a tractor in it.  He dug these posts in by hand. 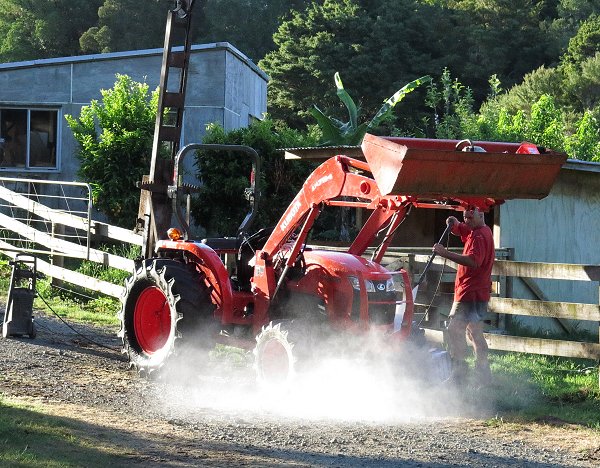 I should think so!

Buy a guy a lovely new tractor and he parks it in a swamp.  Pah!