The week beginning the 9th of November 2013.
Saturday the 9th 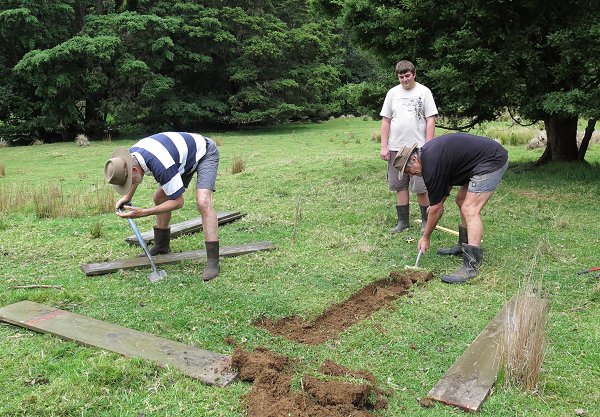 William and Stephan started building a pigsty today, with some help from Lance.  We hadn't quite decided whether or not to have pigs this year, but William found someone with some needing a new home and offered to help prepare their accommodation. 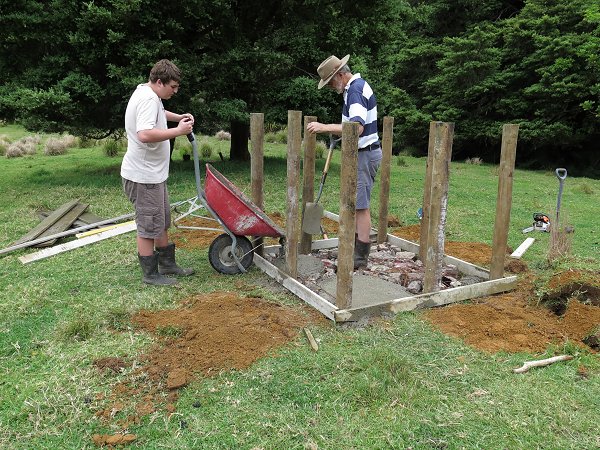 They made Lance work for his lunch by putting him in charge of the wheelbarrow, once it was time for the concrete to be made and poured. 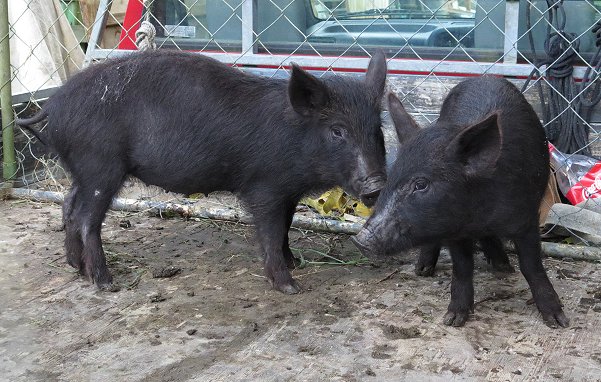 When that was all done, they went off with the ute to collect the two pigs.  We don't know what breed(s) they are, but they have been done a bit hard. 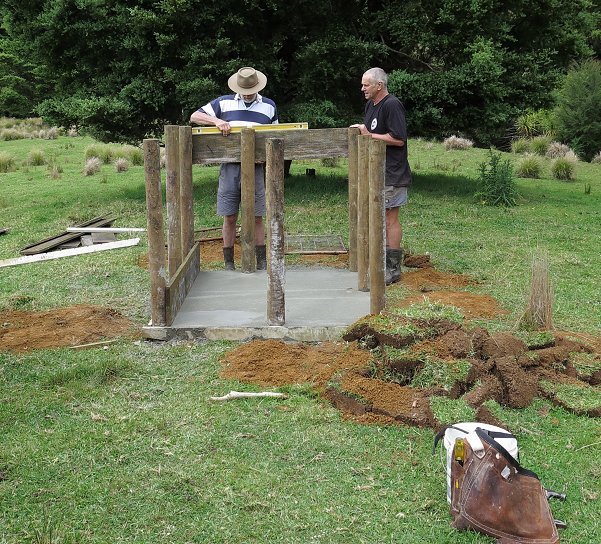 The concrete now set, building began on the small shelter. 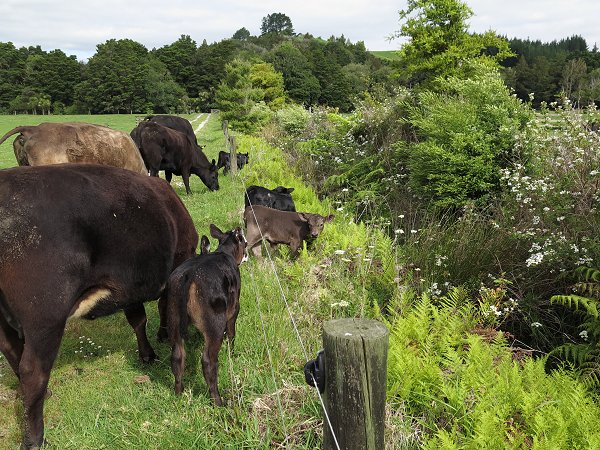 I brought most of the rest of the cows and calves in to the yards in the afternoon.

I don't know why, but lots of the young calves go under the bottom wire along this drain and walk forward until their front feet are in danger of going over the edge so they fall in.  Next time they come along the lane they'll be older, and won't do this.

We came up with a new way of dealing with the calves in the yards: Stephan holds them and I go into the race and tag them.  It's much calmer than him trying to hold and tag at the same time.  The tagging pliers are a bit large for my single hand, but with both hands I can easily operate them.

As we were about to send the cows and calves out to their new paddock, Stephan said he'd like to think about whether or not he should milk Imagen, as well as Zella.  It would solve the company problem for Zella, since Dexie is really not a suitable companion, with her nervous habit of running off in the wrong direction when it's milking time for Zella.  So we put Imagen in the little milking shed area to wait for Zella, whose calf we then tagged.

Zella and Imagen seem pretty comfortable together still, daughter and mother.  Two years ago Stephan milked both of them, but last season Imagen was "just an ordinary cow".

The big exam sessions began today and although it's a year since I was last there, this year it was like stepping into old shoes: all was familiar and went very smoothly. 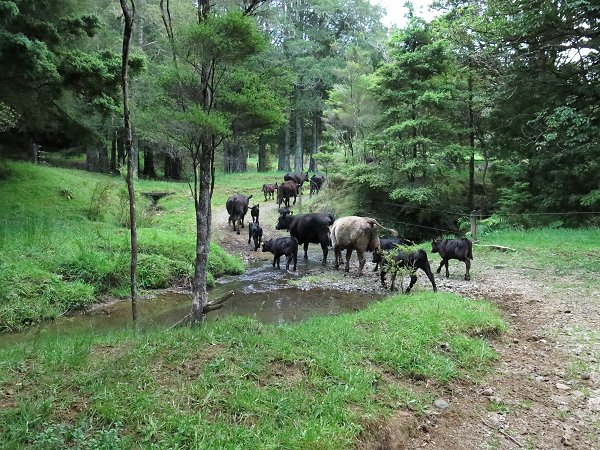 In the evening I checked all the cattle, moving the biggest mobs to new grazing.  The 20 cows and their calves now move well together, with the calves now having learnt to walk along with the group, rather than dawdling and sniffing everything, baulking at anything new. 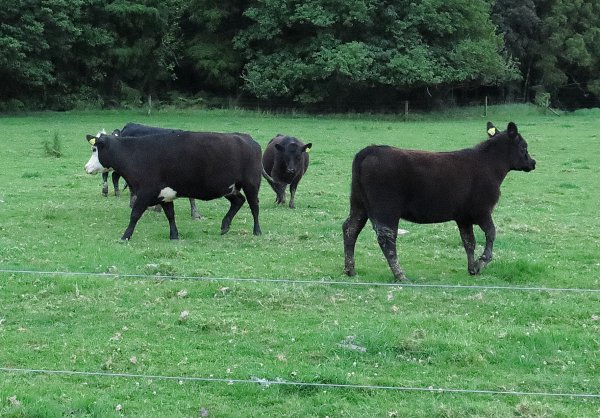 I put the heifers in the House Paddock so they'd be somewhere safe for the addition of white-faced 660, who spent her winter with the cows.  660, having not calved, will fit better with the heifers from a management perspective, than with the cows and calves and I wasn't too worried about introducing her as a sole new-comer to the group, since she's two years older than most of them. 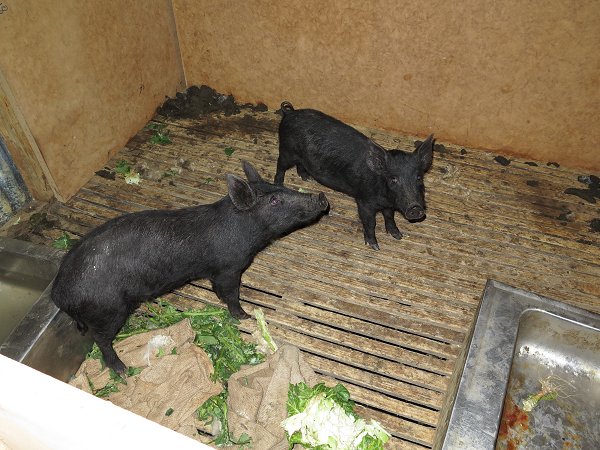 The pigs are settled in the sheep pen until their own area is ready for them.  They're very nervous, but show signs of settling down.  Today was the first time I've heard them make any noise (apart from their squeals of protest when we carried them here), continually quietly grunting to each other. 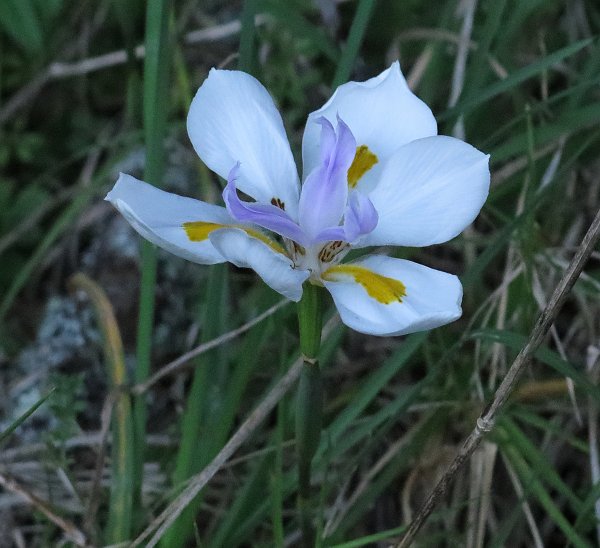 The Irises on the riverbank continue to flower occasionally, these pretty blooms suddenly appearing amongst the grasses where they grow.

The heifers having had a day to settle down with their new companion, I brought them all to the yards to weigh them and apply the tickicide pour-on, before they went Over the Road, where there's now ample grass.  They've done very well through the winter, most of them now already weighing over 300kg.  They should all easily exceed my preferred minimum mating weight of 320kg by the time we start mating toward the end of December.

660 behaved badly in the confined spaces of the yards, bullying all the younger heifers, pushing them into rails and generally being a pain.  We had to draft her into a pen on her own for a while, out of the way of the others.  Hopefully she'll settled down with a bit more time.  For the last few months she's been at the very bottom of the social order with the adult cows and in this mob she's boss and it's obviously gone to her head! 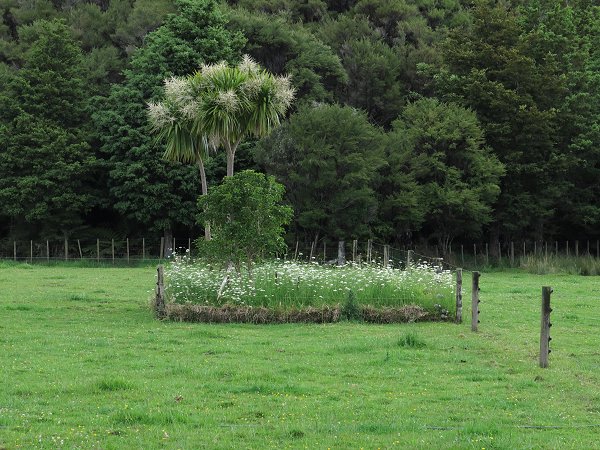 Without enough cows, many of our paddocks would look like that little reserve at the top of Flat 5.  The Parsley Dropwort is an excellent feed when soft and young, so the early-growing plants in the pasture don't get a chance to flower.

Jude spotted and bought an $18 return flight for Stella a couple of weeks ago and she arrived on this morning's plane.  Stella tells me she learns more in a day here than she does in a week at school, so in her mind truancy is excusable.  I'm not convinced by that argument, but it is lovely to see her.

Stephan picked her up from the airport and brought her in to school to say hello.  Because I had trained him as an emergency supervisor, I could leave Stephan to watch the exam for a few minutes while I showed Stella around a bit of the school.  Then they went home and I carried on as usual. 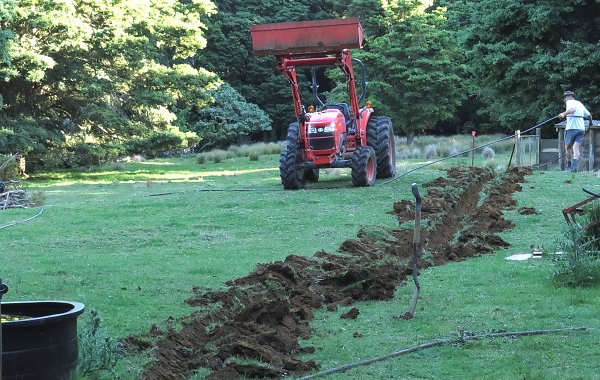 Stephan spent the afternoon building an outside pen onto the pigs' little shelter, then dragged the back-blade across the paddock to create a trench to bury a water pipe.

Stella slept and read library books.  She has a dreadful cough and doesn't seem particularly well, so it probably did her a lot of good.

When I came home we gave the pigs an anthelmintic injection each, to treat them for any intestinal parasites.  We decided it would be sensible because these pigs appear not to have been fed very well and have probably been under some physical stress as a result.  Both pigs squealed very loudly, but the injection was easy to administer, with a firm push through their neck skin and injected subcutaneously. 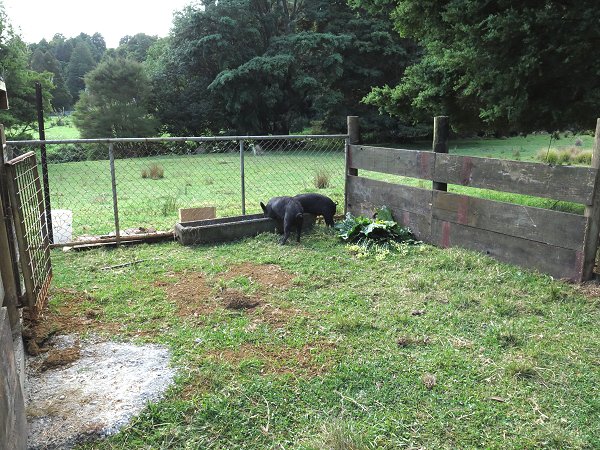 I had today free from exams and the weather was gloriously fine.

As soon as Stephan was ready, we carried a pig each from the sheep pen along to the new pig pen.  The sow is larger and noisier than the boar, but he was still quite a handful, struggling so that I had to hold one of his rear legs very firmly in case he wriggled free.  He didn't and gradually settled down as I carried him along.  Some milk in their trough soon made the pigs happy again.

Stephan continued work on the Big Back boundary fence project and Stella and I set off on a walk around the back of the farm to visit all the native orchids I know about.  By 11 o'clock the air has usually warmed enough for them to open. 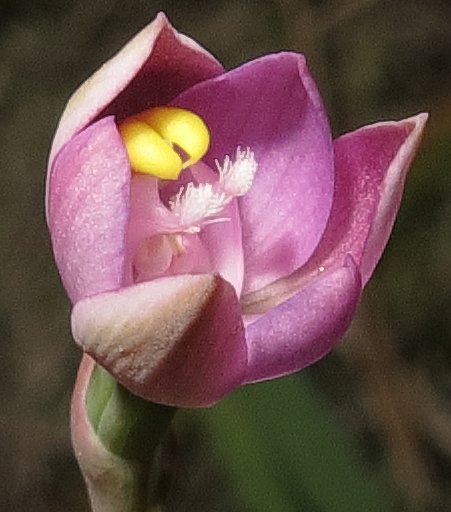 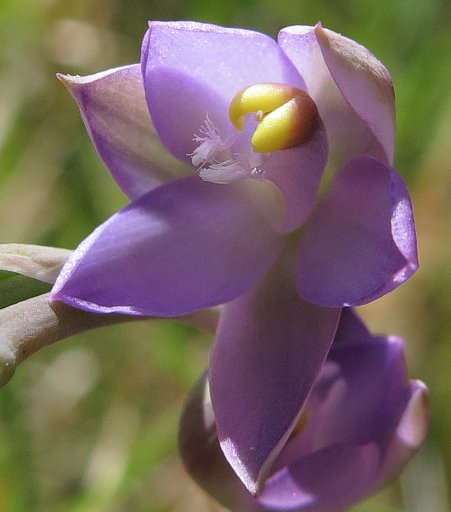 These ones weren't quite open, so we sat on the log in the sunshine and waited.  We tried breathing hot breath on them to hurry the process along and I think it may have helped.  Orchid nutters.

There are many plants growing on a fallen Puriri trunk at the top of the Big Back paddock, now enclosed in the top reserve swampy area, so they're protected from cattle grazing, although not from possums, Pukeko and possibly rabbits.  Fortunately only a couple of flower spikes have lost their buds to hungry browsers.

Some of the flowers in this spot are purple, the most common colour of the plants around the farm, but there are more pinky ones here than anywhere else. 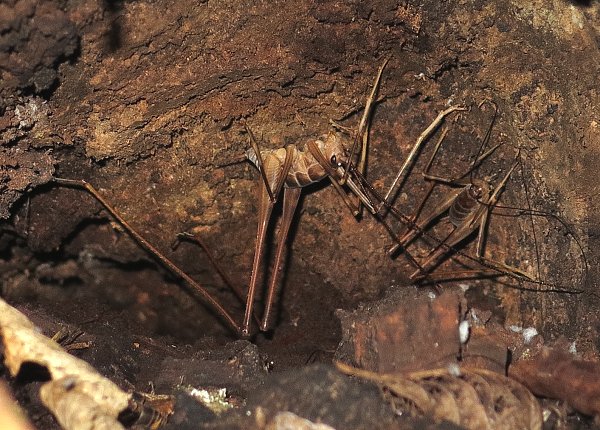 We climbed the south-facing slope of the paddock on the other side of the big swamp, looking in holes and hunting for interesting things.  I carry a tiny LED torch on my camera bag, so we were able to look down inside the hollows of big fallen trees and in one we found these startling creatures: cave Weta. 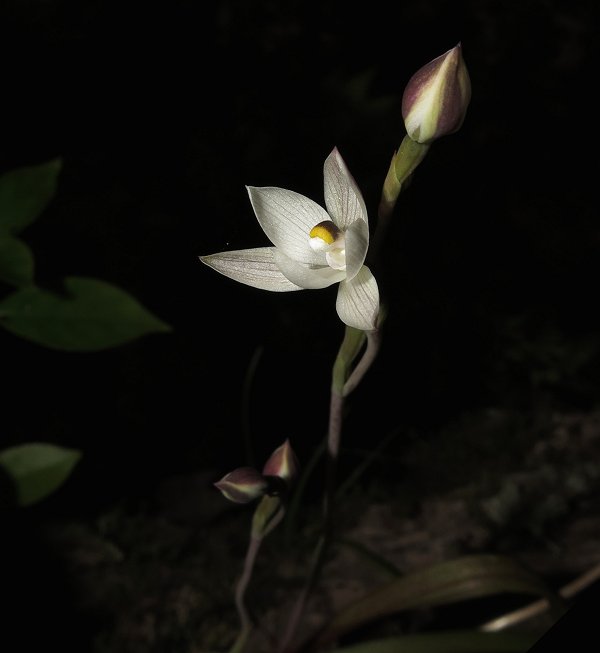 We climbed over the fence along central ridge and walked down into the Middle Back paddock to have a look at the big fallen Puriri in the damp area there.  Several of these beautiful little white orchids (Maikuku, Thelymitra longifolia, apparently a very common species) were open.  They're lovely and the column is quite different from the other sun orchids here, with its smooth un-cleft yellow dome and tightly massed cilia. 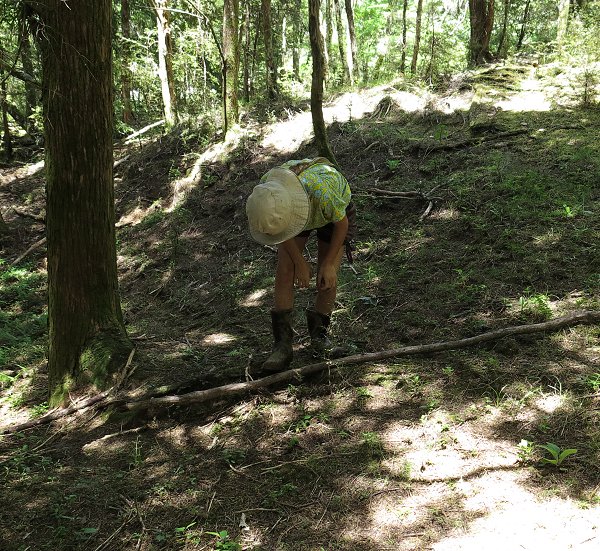 Through into the Back Barn paddock I challenged Stella to find a different sort of orchid - there are lots of greenhood plants now flowering under the trees.  Then we went down to the bottom corner to look for the tiny Caladenia orchids which should also be flowering now. 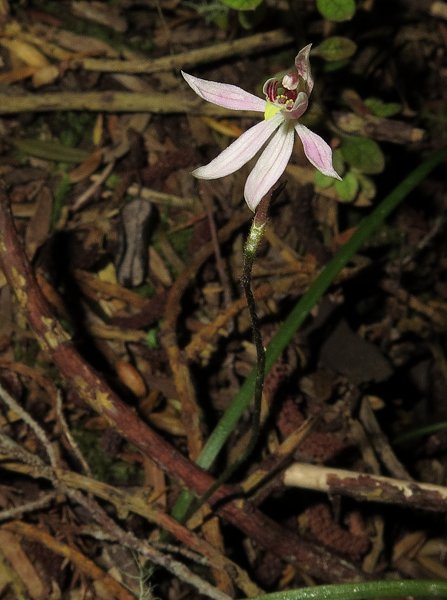 There were lots of buds on the green/white plants and lots of developing post-flowering ovaries on several others, which I concluded belonged to the earlier-flowering pink variety.  But after some searching, I finally found one still in flower to show to Stella. 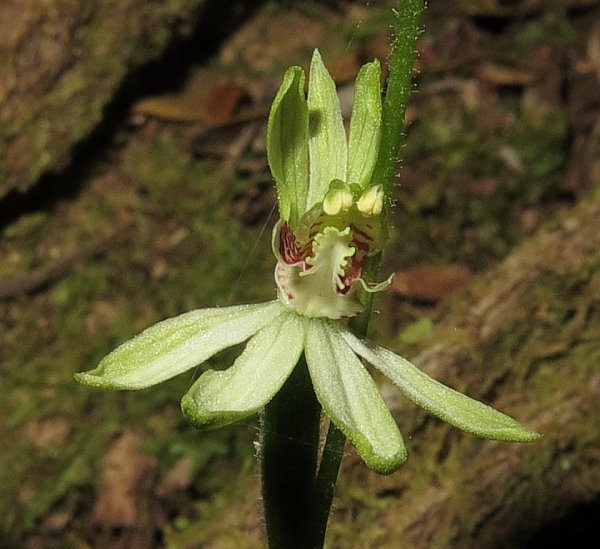 We also found a mutant!  This one has a double column and two extra dorsal sepals (the three petal-like structures behind). 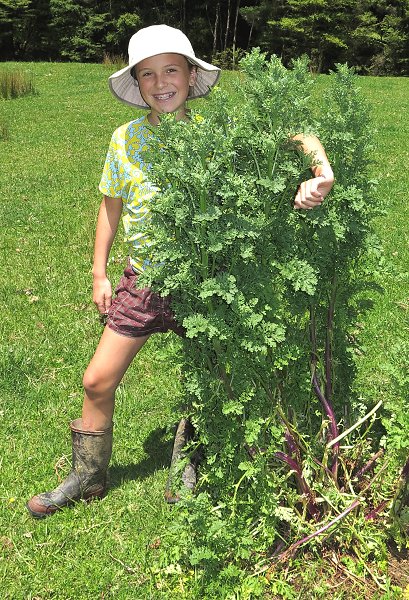 Stella's friend, Ragwort.  This huge plant has been growing over the last few months, but only in the last couple of weeks has it grown up.  Its base was too big to pull out, so I've meant to come back with some herbicide.  Now I'll need more than I would have done before.

The other suddenly-grown creature is this lovely girl, who seems to have done a bit of a growth spurt in height and maturity.  I worked out that Stella's the same age now as I was when I went off to England as an unaccompanied minor to meet my British relatives (my maternal grandmother paid for the ticket while I was still able to go half-price).  She also has braces on her formerly very crooked teeth, which has changed her appearance significantly. 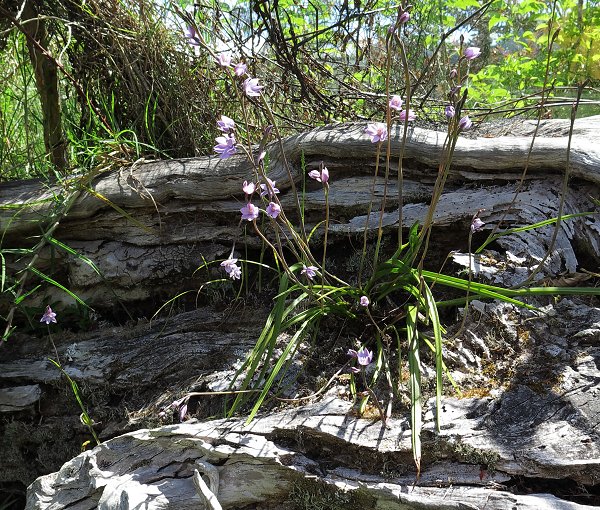 When we got home after four hours walking, there were all the fabulous Thelymitra "puriri" flowers blooming in the sunshine.  We could have saved ourselves that long walk!  Except that it's delightful to find so many different flowers in different areas around the farm. 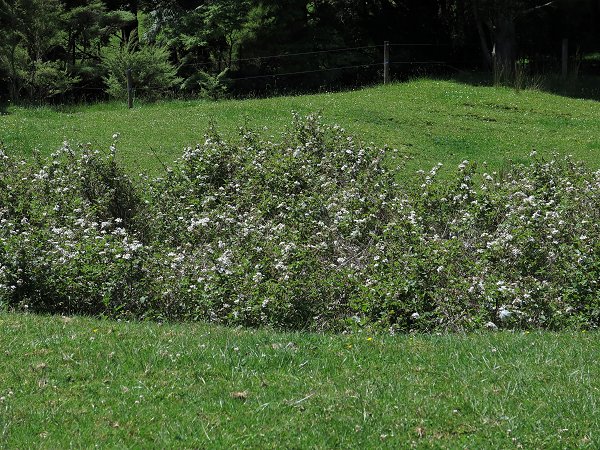 The blackberry bushes are all flowering, with lots of little fruits developing in the centres of the earliest flowers.  Stella asked when the fruit would be ripe and I realised I haven't really noted how long it takes from flowering to ripeness.  This year I will find out. 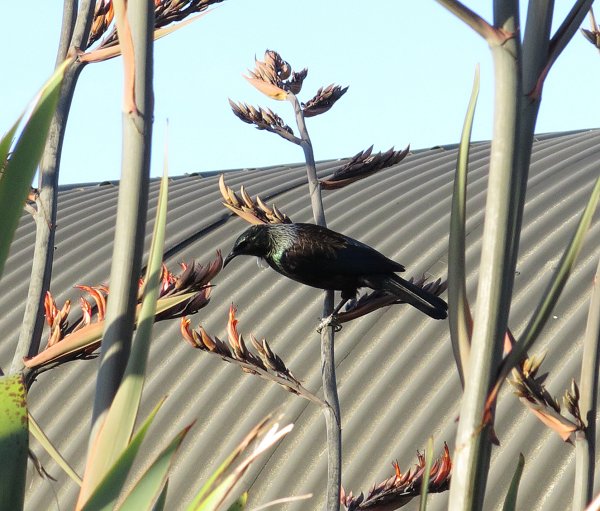 There aren't many Tui about yet, which is surprising considering the vast numbers of flax flowers now blooming.  This Tui obviously isn't sharing the news with anyone else! 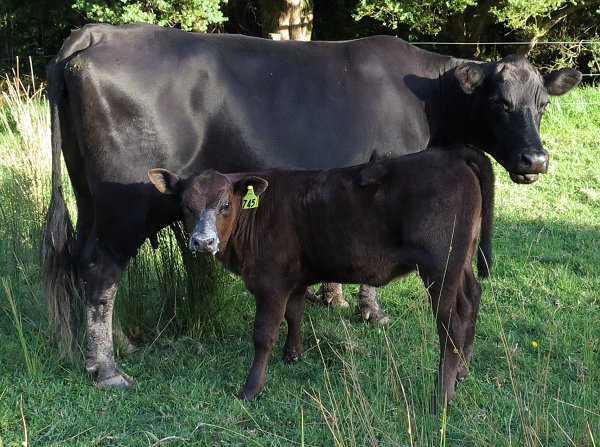 475 is now glossy and smooth, after her thin start to winter.  It looks like there might be rather a lot of cream in her milk! 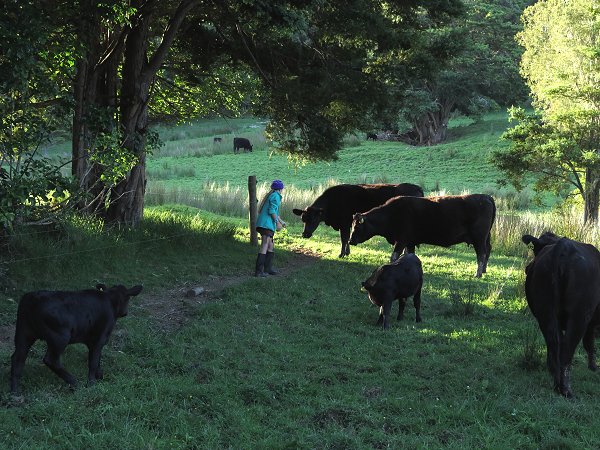 Stella picked Puriri leaves to feed to the cattle and managed to convince Gem 698 to take some from her.  Perhaps food is the answer to taming the twins.  Meg 699 took some from me too. 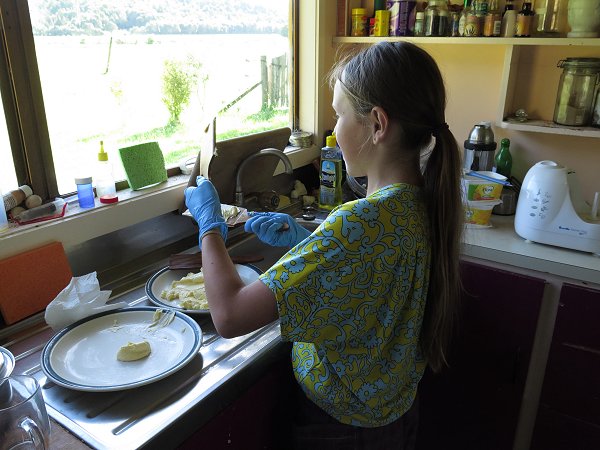 In the early evening we made butter.  I did the beating and washing part with the mixer and then emptied the washed butter onto a plate and showed Stella how to work it to get the water out.  Everything was a bit too warm, so the butter was very soft, but she managed to make a pretty good job of it for her first try.