The week beginning the 2nd of November 2013.
Saturday the 2nd 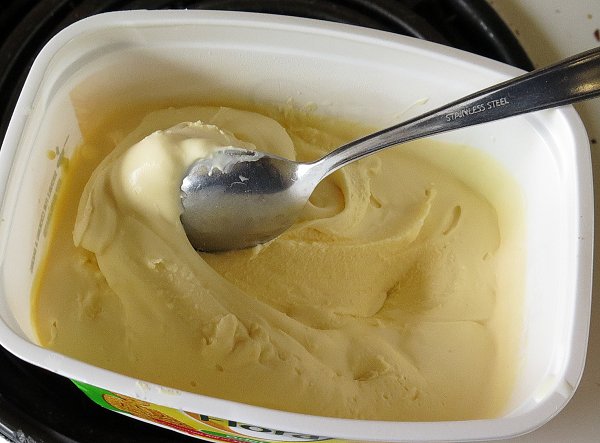 Zella's cream comes off the top of the milk in a thick, leathery lump and this is how solid it becomes after a day or two in the fridge.  I took it out to let it come up to room temperature before making it into butter and while I had it out, decided some of it should go on top of my piece of chocolate cake.  I'm now firmly subscribing to the belief (true or not) that real food is good for you. 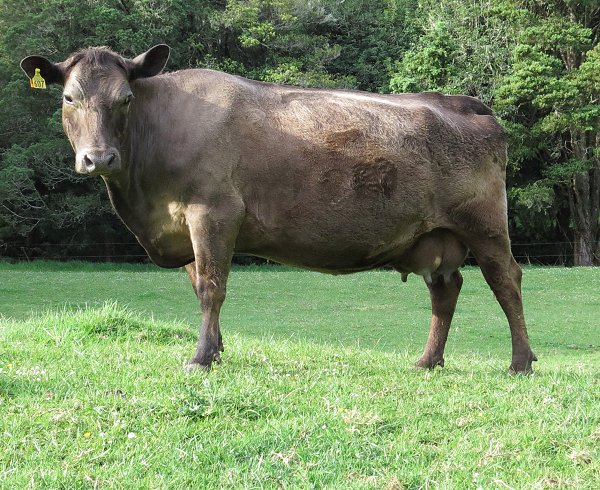 607 seemed to be standing around quite a bit, made some low calls to other cows' calves at one point and looked very much like a cow in labour, without any really obvious outside signs.

I checked her at 10pm and thinking back, I suspect there may well have been a slow leak of birth fluids at that point, but as it was very minor, I discounted what I saw until later.

At midnight I went back to the paddock specifically to check 456, whom I thought may have been in labour and as 607 was sitting quietly under the trees, I almost didn't go to her.  But since I was there, I thought it wise - and then saw she had a little pool of blood behind her, even though she was still showing no other signs of labour.

I waited around for a while to see what she'd do, which amounted to nothing.  One of the tricks I've learnt is that it's sensible to watch for small irritated movements and time the intervals between them, because they probably indicate otherwise-unseen contractions.  When I did that, I could conclude that things were not as inactive as they looked at a casual glance.  But there still wasn't as much happening as there should have been and so at 2am I walked 607 and 456 (who wasn't in labour yet) down to the yards, collecting a sleepy Stephan on the way.

After washing 607's rear as well as is possible, I did an internal examination, finding first a set of teeth!  Poor calf, being suddenly probed in the mouth by some external foreign body.  The head was around in the lower left quadrant and I found the legs up on the right, so the calf was lying almost on its back, which would explain the lack of any real effort by its mother.  I've concluded this is not an unusual presentation (or my herd is extraordinary and problematic in this way) and that the usual walking around, lying down and getting up again that a cow does during labour, must help to get the calf around into the classic "diving" position to exit front feet first, with the head on top of the legs.  Cows don't appear to progress with labour unless the legs are in the correct position to enter the pelvis; I suspect most calves are ready and waiting when labour begins, or able to quite quickly get into position.

With both arms inside the cow, I managed to haul the calf up and around a bit by pulling on both front legs.  The calf pulled back in a lively fashion at one point, which was nicely reassuring.  I could have put chains on the legs and pulled, but my preference is always to let the cow do things in her own time, as long as I'm assured things can progress normally, so we let her out of the race and went home for a cup of tea.

Not much more had happened by 4am, so I let the two cows into the Pig Paddock and went to bed.  607 looked like she'd rather I wasn't watching her with my bright torch and I was reasonably confident I'd done what was necessary and she could get on with the rest of the job. 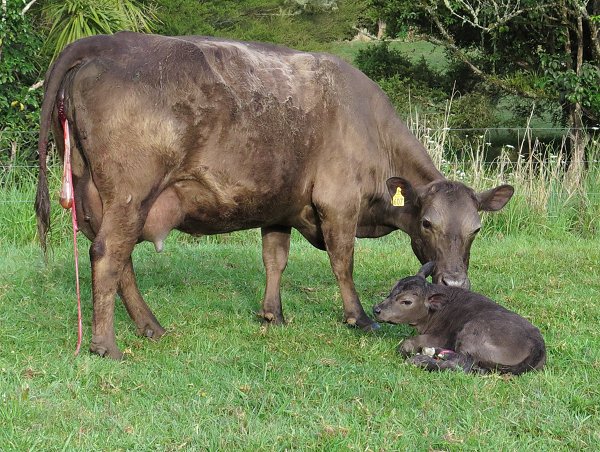 Everything was lovely this morning: a cleaned, dry calf sitting beside his mother and then up and obviously familiar with where the milk is kept.  This is 607's fourth grey son.  I had hoped she'd have a daughter this year, but under the circumstances, I'm not at all unhappy with a live and healthy bull. 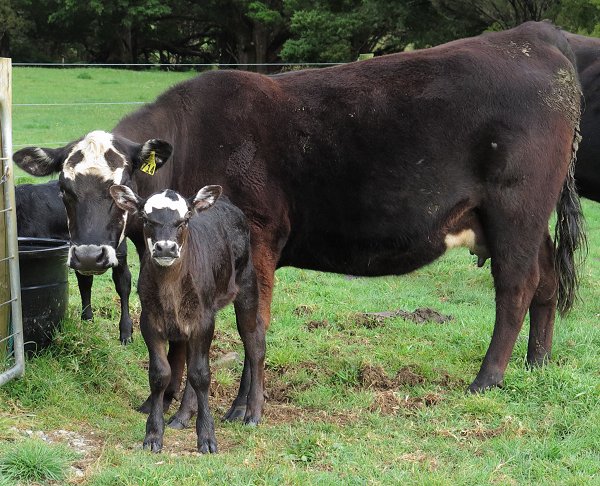 Proof that babies get half their genetics from each parent: this calf has only one of her mother's black patches on her forehead. 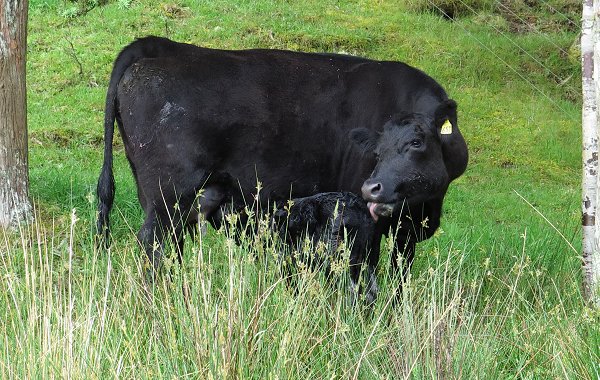 Young 657 would have calved at around dawn.  All day yesterday she sat around looking as though labour was imminent.  I think the calf is a heifer, although I didn't get a very clear look and haven't yet been back for another check. 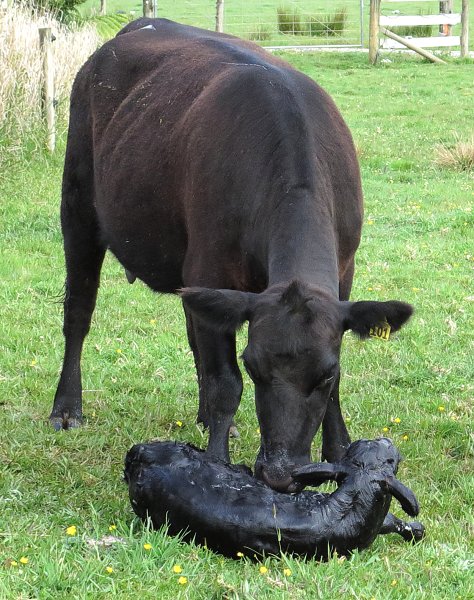 Dexie was behaving oddly this morning when Stephan took Zella in for milking and just after eight she started stalking around with her tail out, delivering this calf by 9.30: another daughter.  This one sired by the US bull BT Right Time 24J, from whom we now have two bulls and three heifers.  I still have one straw left.

Now I wait for 456 to calve and it'll all be over for another year.  Today is 37 days since the first calf was born, which is a nice, tight calving period. 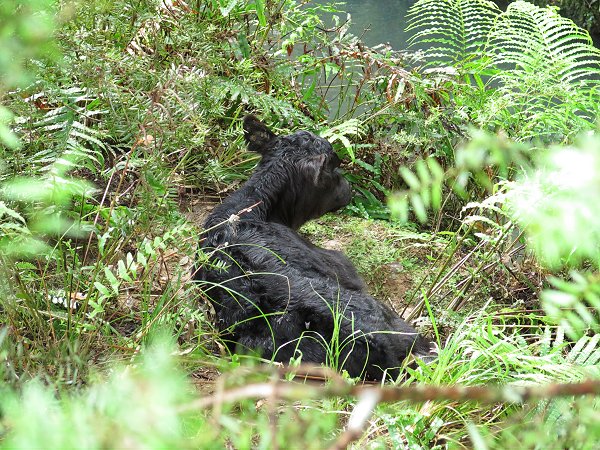 548 was yelling toward the river-bank this afternoon, but I couldn't see where her calf was until I'd spent quite some time looking along the bank.  Calves really worry their mothers when they sneak off for sleeps in inaccessible places, but fortunately this one had just settled down amongst the ferns and not managed to fall into the water.  I very slowly and quietly approached him, making sure he knew I was there, constantly monitoring his level of arousal.  If he'd looked like he was going to bolt, I'd have quickly and quietly withdrawn and left him to eventually make his own way back to his mother.  But he remained calm and I was able to stroke him for a while before gently getting him to stand up and then climb back up the bank in the right direction and under the fence to join his mother.

456 was in labour, but after several hours of wandering around looking uncomfortable, nothing was happening.  I pondered investigating, but recalled the other year, when I'd felt an upside-down calf inside her, whose position probably would eventually have resolved successfully on its own and decided I'd wait some more.

When I went out for a later check, I was relieved to find 456 sitting down with a tiny little heifer calf. 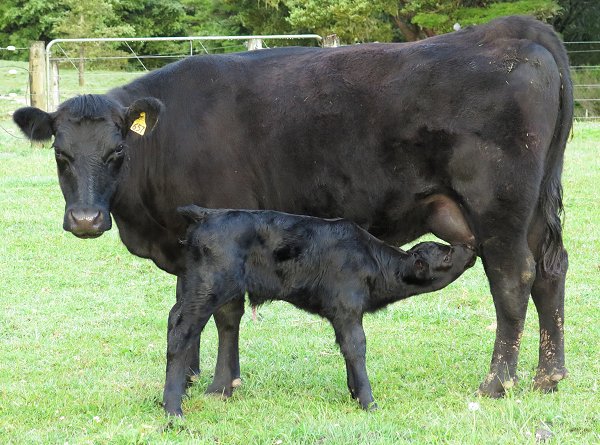 I wasn't convinced that 657's calf had managed to get her first feed yesterday, even though she appeared to be looking in the right place when I first saw her.  657's teats are quite big, although a great improvement on her mother's.  But when I checked early this morning, I was relieved to discover they'd definitely sorted themselves out. 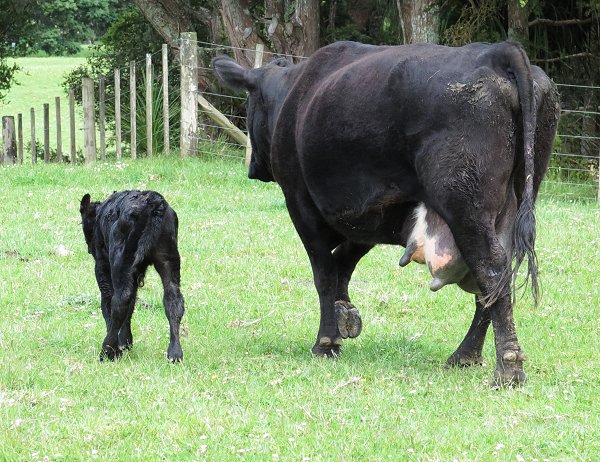 456 was up and about with her calf this morning, so it seems I have achieved that marvellous thing, 100 per cent live calving this season.  I am very pleased with it all. 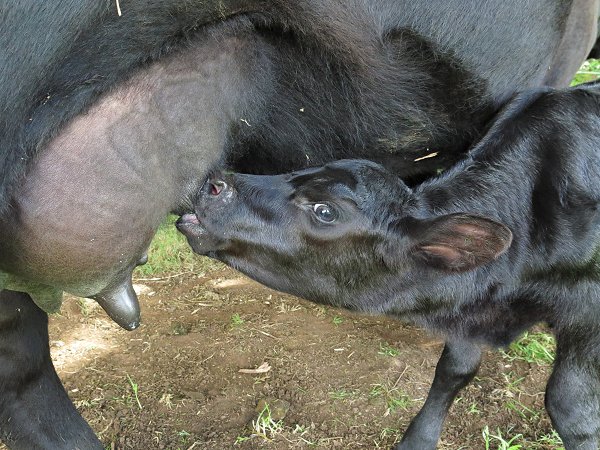 Eva's calf is a pretty little thing.  All five calves of their sire have quite distinctively long, finely chiselled faces. 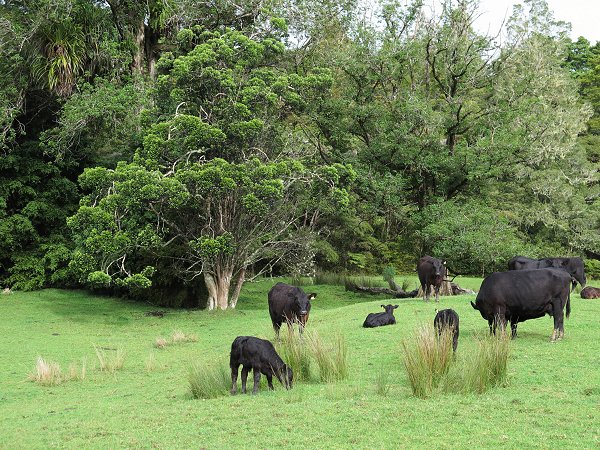 The tree on the left is one of my favourites: a Puketea.  Its older leaves are blackened by a fungus and the new leaves are now bright green, so it looks really pretty at this time of year. 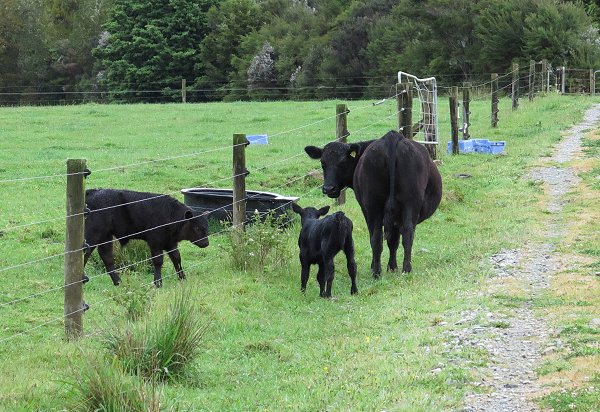 Finally, 657's calf has emerged from her lying-in period.  I haven't seen her for two days, but I inspected 657's udder each morning and evening to ensure the calf had fed and was reassured that even though I couldn't find the calf (and I spent some time looking!), she was somewhere safely tucked away.

There was no grass left in Mushroom 1, so I had opened the gates for the cows and calves to move down to Flat 2.  Five pairs and 657 wandered down, but I never saw 657's calf, so I left 657 in the lane, with access back to the paddock they'd left.  She never appeared distressed, so she must have known exactly where to find her calf.  Now they're back in with the others. 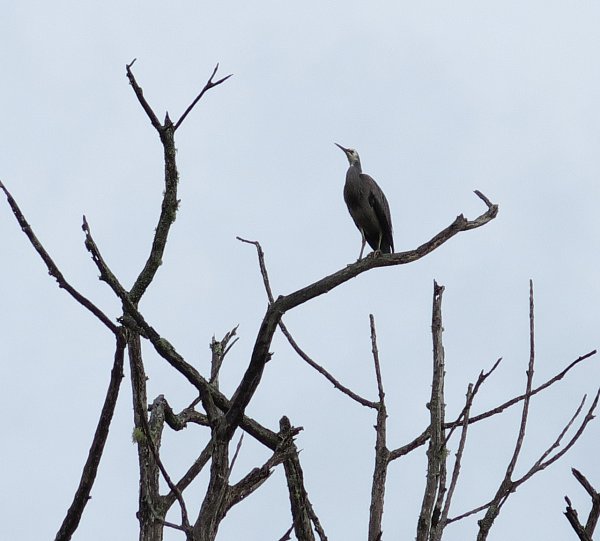 There are more herons around this season than I've ever seen before.  I wonder why? 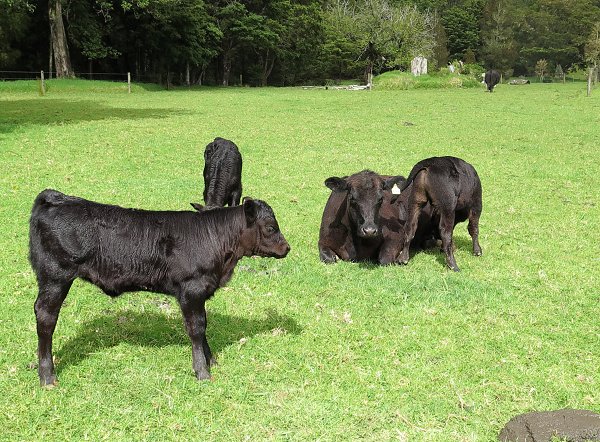 It doesn't take the calves long to work out how to obtain a feed whenever they want, even if their mothers aren't cooperating.  This pair are Gem 699 and her son, 739. 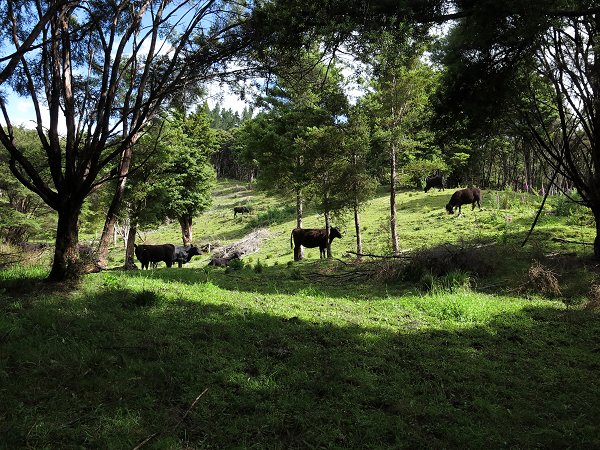 Having been busily involved in sorting out exam session rolls and sorting and packing papers, I've only seen some of the heifers in passing for the last three days, so decided I'd have a head-clearing walk this afternoon to ensure they were all present and correct.  I'd turned off the electric fences on this side of the farm when I put the cows and calves out here and I wondered if the heifers had taken the opportunity to go somewhere they shouldn't, since I'd only seen a handful of them any time I checked on the other mob.  But here they all were this afternoon, quietly grazing or resting on the side of the hill in the PW. 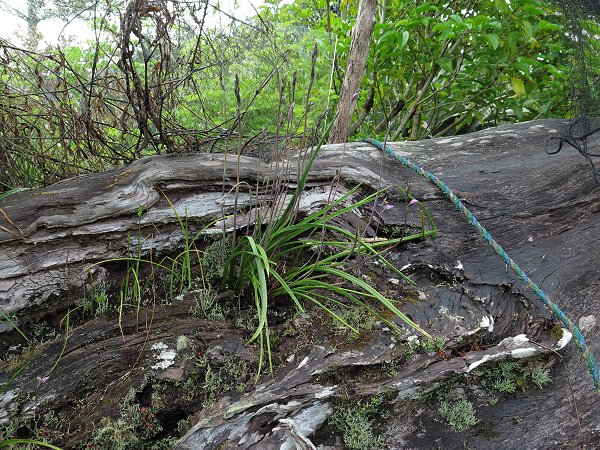 The orchids are mostly intact, despite my not having sorted out their protective netting this year.  Some slugs have wrecked a couple of flower spikes, but no larger browser has been to wreck things yet.  They're just on the verge of blooming, with purple petals visible on the most mature flowers.  They'll probably look fabulous next week, when a few days of fine weather is forecast.  Hopefully I'll get to see some of what ought to be a vibrantly blooming show.