The week beginning the 21st of September 2013.
Saturday the 21st

The sick ewe has been looking a bit better today, up and eating more often than sitting down looking miserable.  She's in such good body condition (has lots of reserves) that I'm not overly worried about her.  I wonder if she had a fight with someone (they've been doing that a lot since being shorn, no longer recognising each other as well) and has a headache, or got a shock when the rain fell so heavily on her just-shorn back last week. 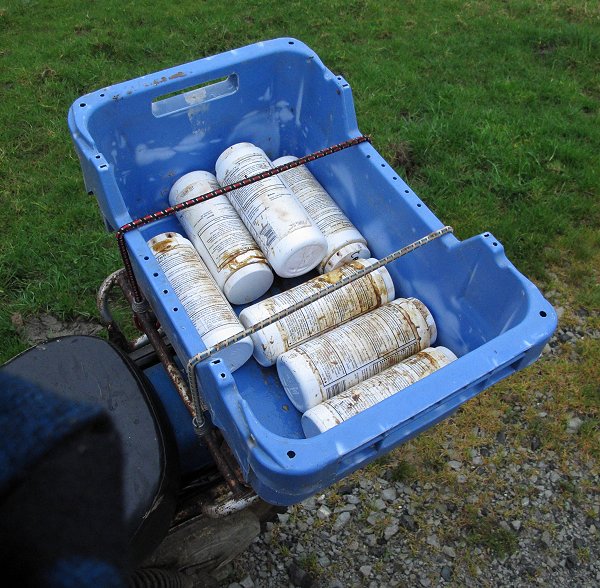 Every afternoon I put about 60g of Magnesium Oxide powder into a little water in each of these containers, shake it up, then fill to the top with Molasses.  The Molasses is much thicker than the MgO and water, so it takes some vigorous shaking to mix the two completely. 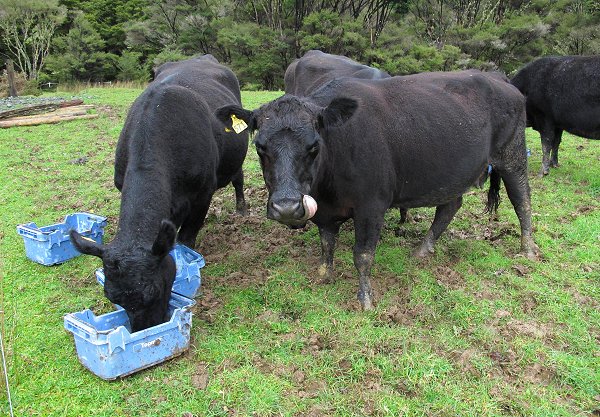 When I get to the paddocks where the cows are, I divide each of the containers between two Topmilk bins, so each cow gets about 30g of Magnesium Oxide - if she's quick enough and licks it up before being pushed out of the way by a greedier bully.

Last night Metservice issued a weather watch for a wide area including Northland.  The watch messages (to which I subscribe by email) are less serious than warnings.  The message said there could be heavy rain and thunderstorms, but because it was all so vague, I didn't think much about it.  "Northland" often doesn't really mean us anyway, since our micro-climatic conditions can vary widely from those experienced a little further south where the land-mass is wider.

There was a tremendous downpour sometime around 1am, which I ignored by rolling my pillow around my head.  But a while later I awoke, perhaps because of the increasing level of noise outside as the river came up.  The rain had probably fallen at a rate of about 30mm/hour at its heaviest (from the sound of it on the roof and long experience) and downpours like that cause our streams to rise alarmingly quickly.  The river beside the track was up around all the Cabbage Trees where I planted them on the bank and was starting to come over the corner where we go up to the Chickens Paddock.  The other stream had already been up and over the bank, through the pond and gone down again - the two waterways respond differently because of their proximity to the hills in relation to our place.

At 2am I went out to check on the near-calving cows in Flat 1, where the paddock was ankle deep in water and the stream had swallowed the bottom corner.  I moved the cows, because if any had calved too near the water, a calf could very easily have tottered into the flood and disappeared forever.

Later, in the early morning light, I discovered the four hens which still live in one of the little triangular cages, huddled on top of the overturned nesting box in which the bantam had been sitting (lucky it didn't flip right over and trap her) and the water marks from the flood showed they must have been trapped in the shelter by about eight inches of water.  They were all dry, but probably lucky not to have been harmed. 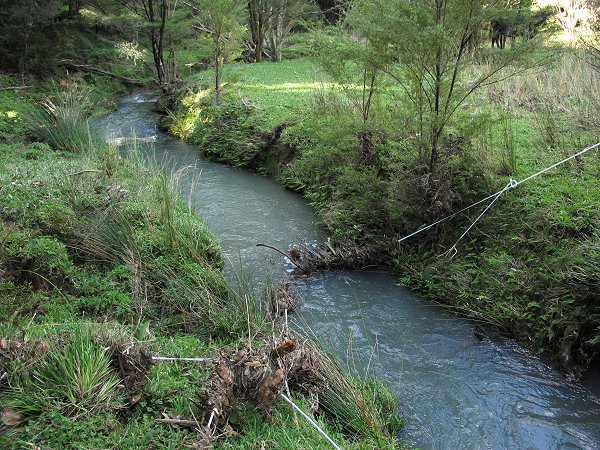 Out in the Small Hill Paddock I had some tidying up to do.  This is the tape I erected to keep the cows out of the sticky area they used to use to cross the stream, where Stephan has created a silt-catching drainage sump for the water coming down the hill to the stream.

I disconnected the tape from the electric fence and pulled and shook free all the flood debris from the tape and standards. 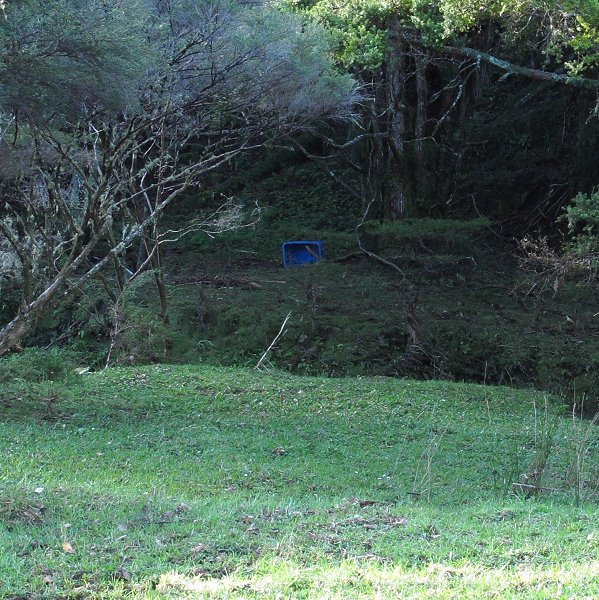 I've been giving Zella and Dexie 101 their Molasses on a low flat bit of the Bush Flat paddock near the gate and during the night I imagined their Topmilk bins floating off in the flood, probably to be found one day in the midst of a debris blockage of the stream, but fortunately neither of them had gone very far.  The first was sitting on the track on the high side of the stream crossing and the second was a few corners downstream.  When the water level drops, I'll go over and get it.

Heifer 701 allowed me to scratch her tail.  Of the ten R2 heifers, I can now touch seven.  I find it far easier to work with my cows if they're happy to have me near them.  I have yet to convince the twins of the goodness of my intentions - although I did manage to scratch both of them once in the summer, when they were looking the other way.  Meg enjoyed it so much she nearly fell over.  710 is the other untouchable.  I had to be careful with 701 because she kept stepping backwards toward me, wanting more!

I switched the big water tank's taps today (for the first time since we installed it) so it would feed back to the troughs, because the flood has done something to our running water supply.  Fortunately the cows don't need to drink a great deal at this time of the year, but I don't want the troughs empty if they wish to use them.

Ella arrived to stay with us for a week of her school holidays.  It's been nice seeing her so often this year.  She and Stephan went out for a friend's birthday dinner in the evening while I stayed home on maternity watch.  I don't go out at this time of year.

We had the most awful storm, with very strong winds from the south-east and then south-west, bringing driving, horizontal rain - not a lot of it in terms of density, but it went on and on and was being blown so fast that it was very wetting.  The rain-gauge managed to collect 68mm, so the river was up over the bridge for a long period.  I checked on the cows at 8pm and found most of the flat paddocks ankle-deep in water.  I hoped the cows would hold on to their calves until the storm had passed. 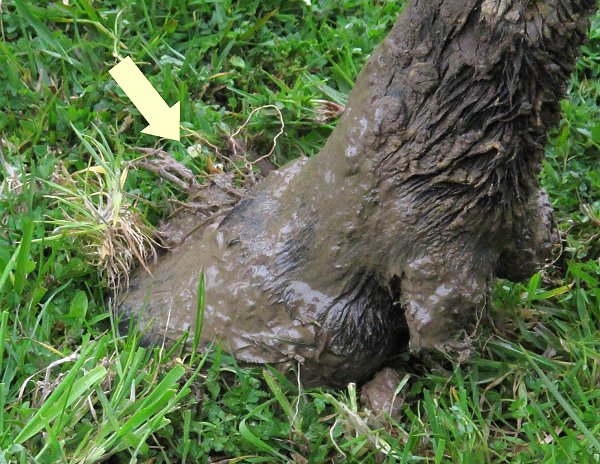 517 was limping slightly a couple of days ago and today I found her lying down, so I could get to her foot - she wouldn't let me touch it while she was standing up the other day.  The problem appears to be the collection of a lot of fibrous bits of grass between her toes, which get compacted and because the ground is so soft and muddy, won't fall out.  If they're there long enough, the warm conditions are conducive to rotting and often some of the stuff I pull out of feet in this situation is black and stinky, which may presumably cause some soreness.

568 was oddly alert this evening at 10pm and watching her, I noted she looked a bit uncomfortable (swishing her tail in an annoyed fashion and moving on her back feet) about every five minutes.  I got up at 2.30am for another check, finding her much the same.  I think bovine labour is much longer than most people observe. 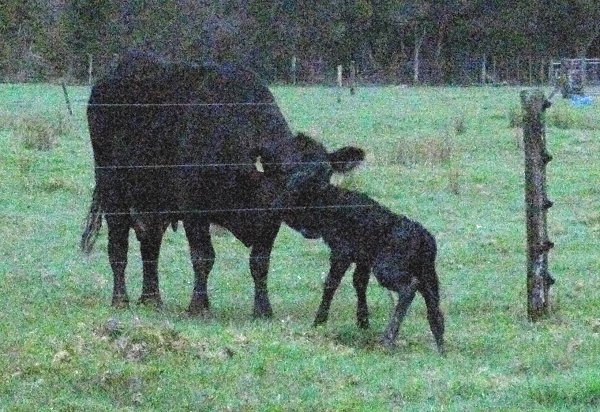 At about 6am she must have delivered her calf - and then shoved him through the fence into the next paddock, as she usually does.  Athena was there when I looked out the window, but was fortunately only curious, not intent on stealing the baby.

I went out and helped the calf get his unsteady back legs through the fence, chased Dinky 94 out of the way, since her intensely curious involvement wasn't helping 568 settle down and left the two of them to calm down and sort themselves out. 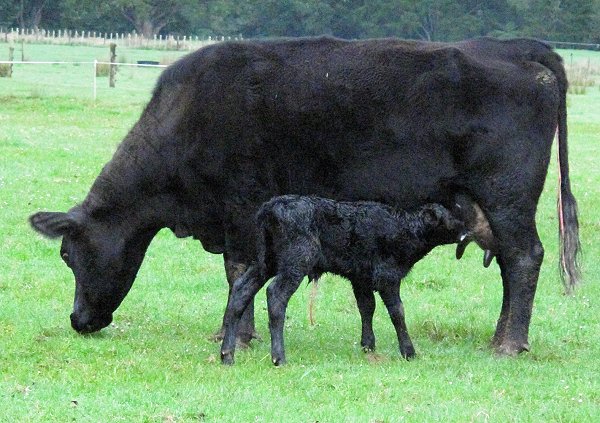 By the time I'd fiddled around changing the position of an electric tape across the paddock, the calf had found out where to get a drink and was noisily slurping.  Milk froth at the corners of a new calf's mouth is a good thing to see. 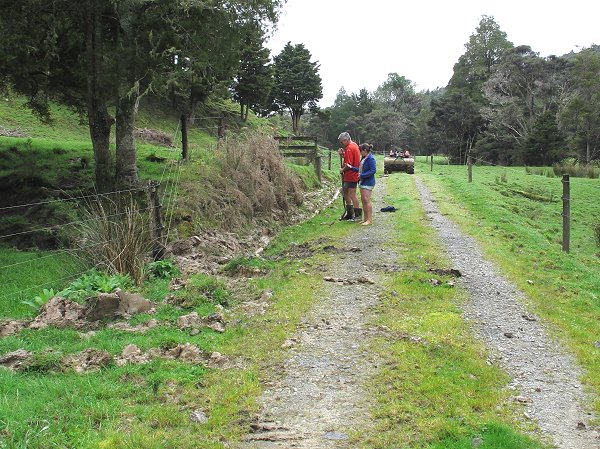 There's a very boggy place at the gateways into the Pines and the PW and it has long needed a culvert.  This isn't quite the best time (in terms of ground conditions) to do such work, but then again, it couldn't get much messier.

When I went out to check some of the cattle, I found Stephan and Ella and a long drain, with quite a lot of water draining more freely than it has for a while. 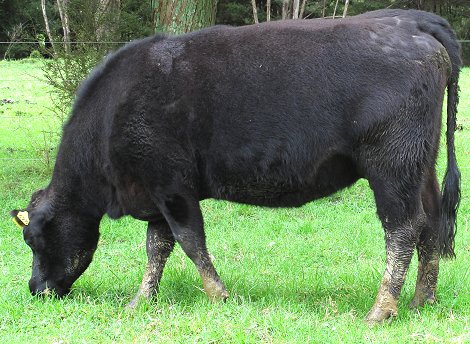 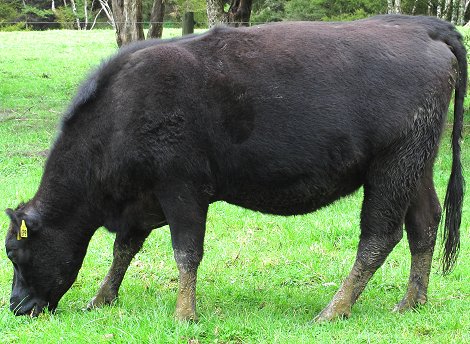 The twins.  I took the picture to compare the current shape of their back ends, to see whether there was any real difference in how much their tail heads have risen; I don't think there is.  Gem is all moth-eaten around her rear, from scratching under trees.  She must have too many lice.

Have you entered the first of our two Calving Date Competitions?