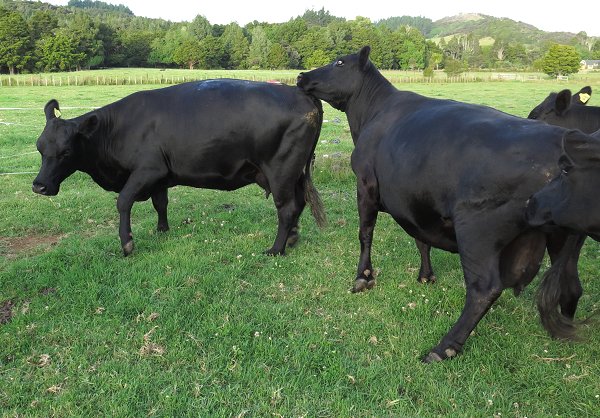 I did an Emergency insemination this morning!  Emergency came on heat yesterday evening, so we brought the mob in to the Pig Paddock to be near the yards early this morning.

I decided to relax about cows not coming on heat within the first three-week cycle, because I usually get them in calf whenever they do come on, especially later in the mating period.

This evening both Eva (Emergency's mother) and her mother Demelza, came on heat, so I took them all in for another night in the Pig Paddock - it's not a large enough paddock for them to remain there for long, but serves well for overnight stays.

Cows have no sense of familial relationship when it comes to sexual behaviour. 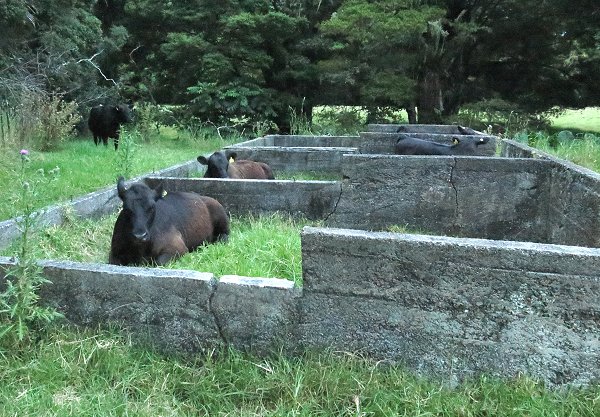 In the early morning I found these heifers happily occupying the old pigsty pens.  They often come and sleep in here when in this paddock.  Perhaps the concrete (now beneath the mat of Kikuyu grass) holds enough heat to provide under-floor heating throughout the night.

I inseminated Eva first, with semen from Pono of Kawatiri (given to me last year by his breeder, Mr David Bone) and then Demelza, who got a shot of Kessler's Frontman, a low birthweight sire.  Demelza hasn't had a bull calf for a while, but if she has one next time, I could use such a bull over the heifers. 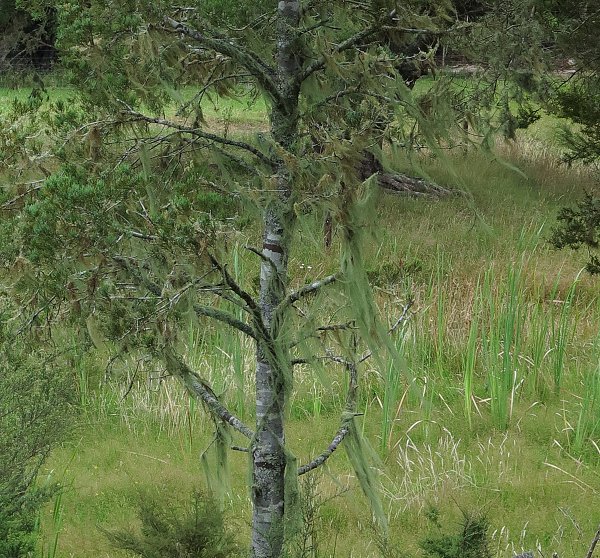 I like Lichen, especially the long stuff which hangs from the trees and blows around in the breezes. 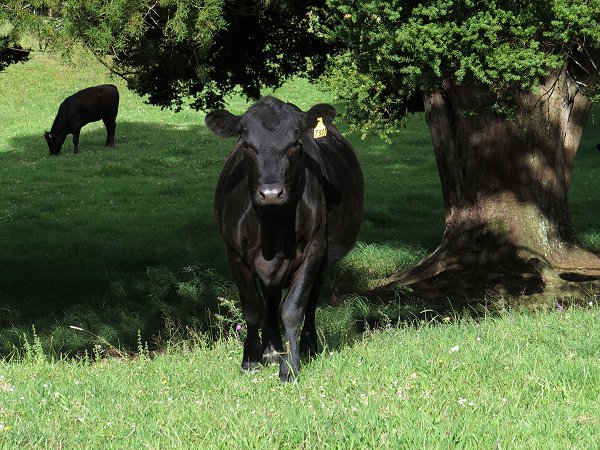 730, on heat, looked like she might very well come over and attempt to mount me!  I'm always careful around my cattle when they're on heat, because one could be severely injured by a hot cow which wanted to ride any other creature in her paddock, but this was the first time I've ever felt there was serious intent on the animal's part.

Victoria is in the background, still hobbling around eating enough to survive.  I'm still hoping she'll get over whatever ails her.

Today was tough.  I got off to a late start and because I could see all of my insemination mob from the house, I didn't immediately go for a closer look.  While I was processing the milk, I noticed all of them head to one spot in the paddock, as they sometimes do if there's something unusual to see, but I thought it was probably just a Pukeko nest or a hawk landing to catch a rabbit and didn't worry about it.  Half an hour later, when there were still gathered together, I looked through the binoculars and saw one of them sitting in the middle of the group and figured they had simply stayed where they were and begun sitting down together.

A little after nine I went out to see them and as I approached the gate into the paddock, from the middle of the group emerged a very distressed-looking heifer, 117, with her head raised oddly, foaming at the mouth and high stepping with her front feet in a manner most unusual.  She blundered around in an arc and straight into the four-wire electric fence along the river bank, where she appeared to stop, although I feared she was going to go on through and over the edge.  I thought the best thing to do was to immediately cut the power to the fence, so rode back across to the switch and turned it off.  Whatever was going on was all wrong and potentially risky to deal with, so I carried on out to the front and called Stephan to come urgently from the fencing job and assist.

Back in the paddock, the heifer had pulled herself back out of the fence and was high-stepping out into the open, with all the others following her and she eventually stopped and gradually slumped into a normal sitting position. 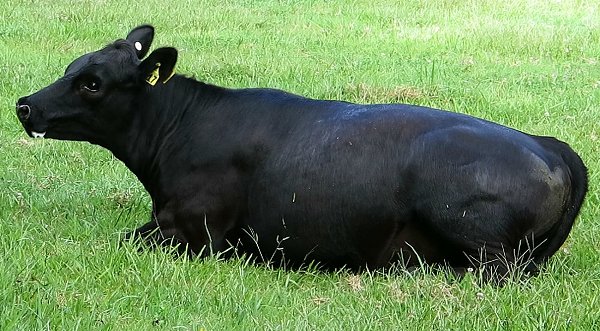 She was continually champing, hence the production of the foamy saliva, with her eyes flickering back into her head.  Her whole body constantly twitched.  Over the next fifteen minutes she gradually collapsed over onto her right side, still champing and twitching.  I sent Stephan back to get the rifle and continued my distressing vigil until he returned.  My lovely heifer was obviously dying and it seemed unreasonable to let her continue any longer than necessary, so Stephan shot her. 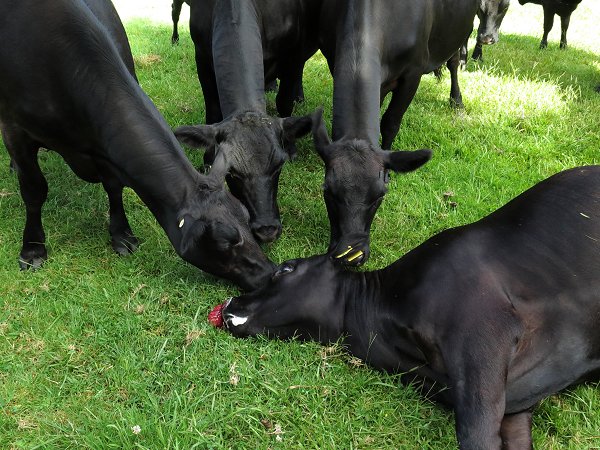 It was tremendously upsetting to see a beautiful, apparently healthy, well-grown heifer reduced to this.

The others gathered around and sniffed her, licked at the blood a bit, but we eventually erected a tape around the area so Stephan could bring the tractor in to pick her up and take her away for burial. 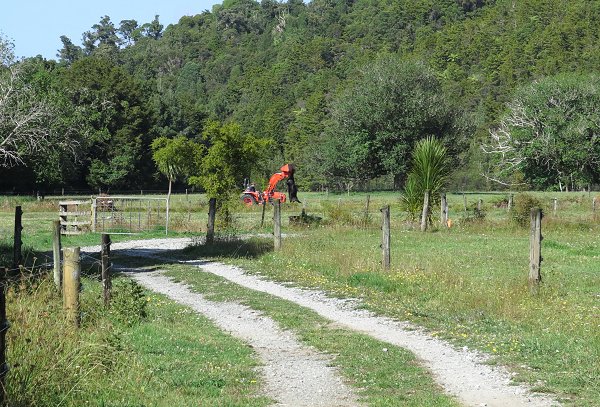 I went back to the house to pick up some containers for a few bodily samples.  We cut her open next to where she'd be buried and I took a liver sample and some blood for testing.  A Thiamine deficiency was probably a possibility but because we'd shot her, I didn't think there was much point in trying to have a look at her brain - apparently a sample would have determined that possibility one way or the other.

Her blood test results gradually came back from the lab over the following couple of weeks, showing that her liver stores of Copper and Selenium were good (not that either was likely to have had any involvement in what killed her, but her status gives me some information about the rest of her contemporary group) and later, a test for Lead was negative.  I didn't think Lead a probability, but because it causes seizures in poisoned animals, it seemed sensible to eliminate it.  We haven't lived here for ever and people used to dump Lead batteries on farms and since Lead apparently tastes quite nice, an animal might return to a discovered source over and again until the accumulation was fatal.

117 was behaving completely normally the previous night at my 11 o'clock check.  If she'd had some sort of Thiamine problem, I understand there would have been some observable change in her behaviour and health, but there was nothing to indicate what would happen today.  There was an unusual event twenty days ago (the oestrus cycle is 21 days long, so I wonder if there is a hormonally induced sensitivity involved here) when I found her grunting and drooling and behaving as if she really wanted to cough.  I thought that perhaps she'd swallowed a bee and been stung down her throat and as it was dusk, decided I'd see how she was at the time of my late check and then found her much quieter, although still grunting a little when exhaling.  On the following day and every day afterwards, she was completely normal again.  In retrospect, I think I witnessed a very mild seizure on that occasion.

I watched all the others with trepidation over the following days, but as I write this some three weeks later, nothing more alarming has happened and I have hopefully concluded that 117's problem was individual to her, or possibly an inherited epileptic problem.  117 is Athena's daughter, whose mother was Isla.  (Isla, in case you're a new reader, was euthanised after a year of seizures in 2009.)

I've been watching Athena since this event, wondering about the wisdom of continuing with her in the herd. 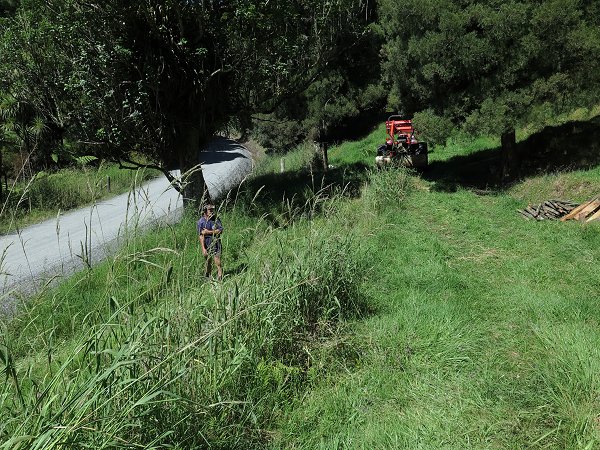 After burying 117, Stephan went back up to his fencing job Over the Road.  I wandered through my day feeling shocked and sad. 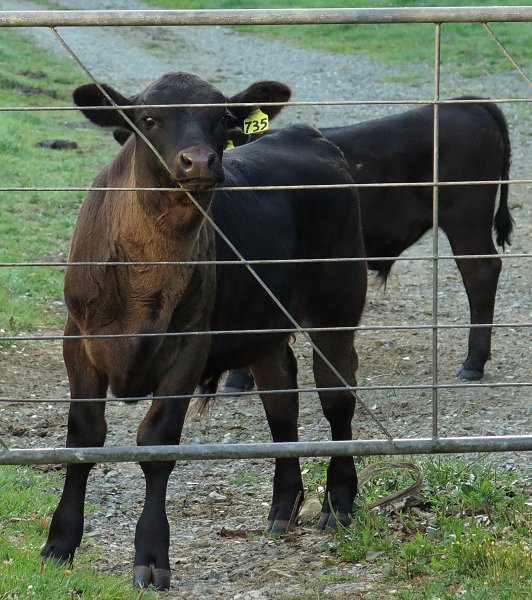 Zellason waiting for his breakfast, resting his chin on the gate.  The two calves usually spend the night in the little green patch by the cowshed, but sometimes the cows indicate a particular preference for the area, so they swap sleeping arrangements. 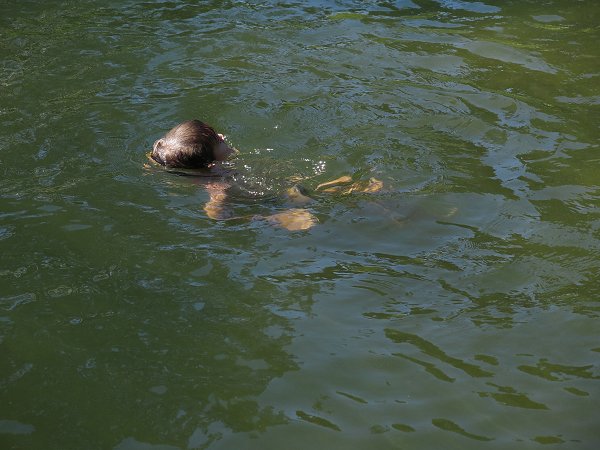 Stella and Louie (my youngest sister Jude's first and third children) travelled from Auckland on the bus today and I picked them up from town this afternoon.  It wasn't long before they were in the pond.

Louie, who previously always swam with some sort of floatation aid, has gained tremendous confidence since last summer, although he swims like a drowning child.  We repeatedly checked with him that all was well and he, between gasps, assured us he was just swimming.  If he wants to move anywhere at any speed, he swims under the water. 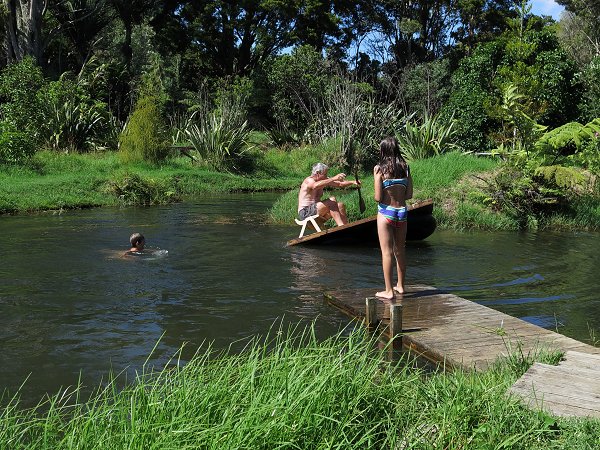 I suspect this was a deliberate capsizing for the benefit of Stephan's audience. 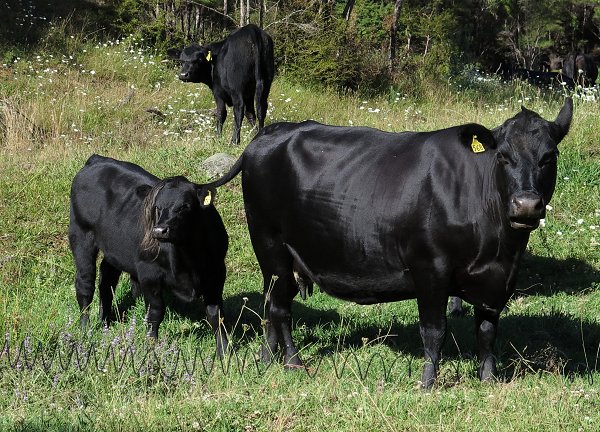 What a pretty hair-do - with a little help from his mum. 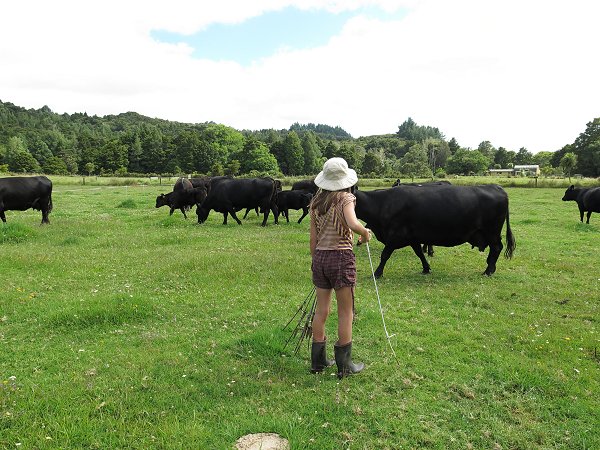 I like having my young farming helpers around again.  It's lovely going out for walks and talking and finding interesting things to see and think about.  It's nice when they carry the fence standards too! 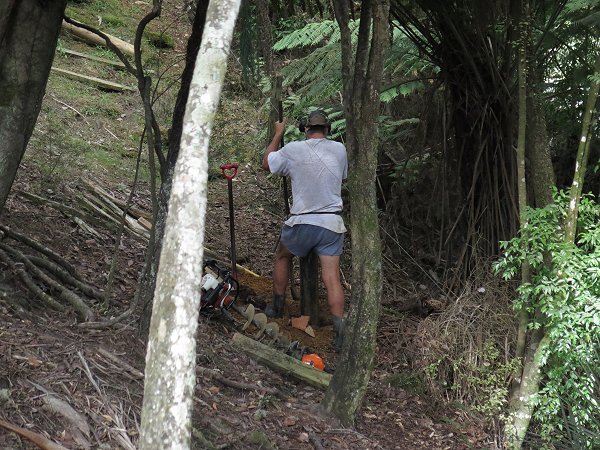 Stephan has had to hand-dig a lot of the posts and angles through this next section of fence, because most of it is on a steep slope facing the road. 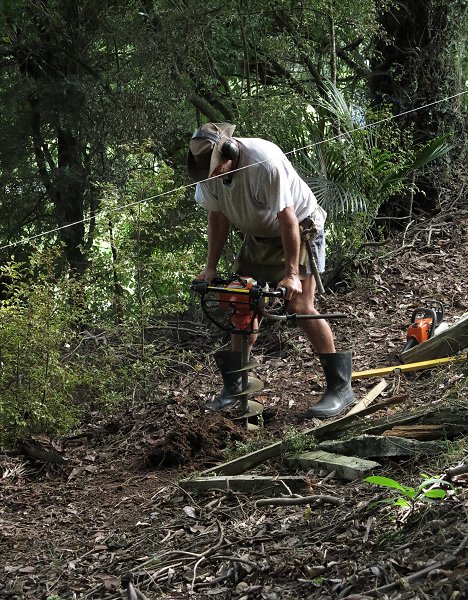 Fortunately our friend Lilo lent him her post-hole digger, which has taken a bit of the hard work out of it. 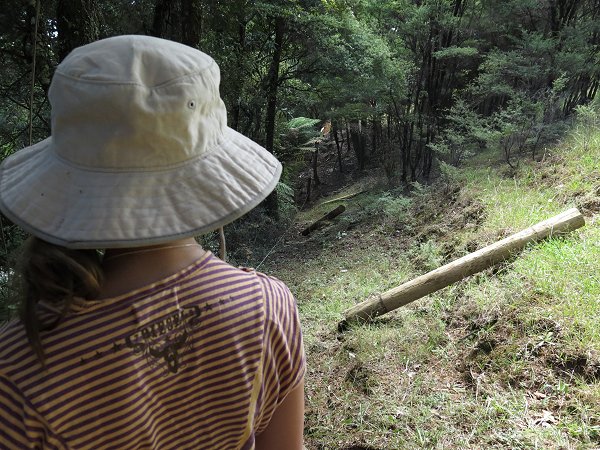 Louie, Stella and I walked on up to the top corner and somebody twanged the fence wire and discovered that it caused a wave to travel down as far as the next post and back again.  We spent some time experimenting as I explained how waves work and what an excellent example this was of theory in action. 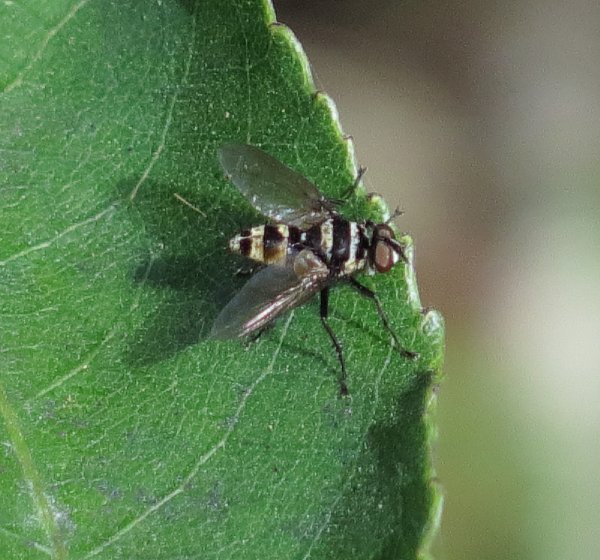 Cute fly.  Stella spotted it and I couldn't see it very clearly with my now-dodgy eyesight, so took a picture just before it flew away. 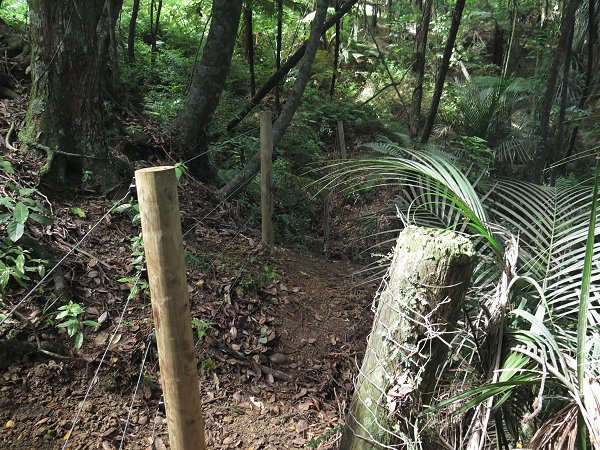 A little further on was the second section of fence, the bit erected through the really tricky gully at the bottom of our reserve.  This was the first time I'd come to see what Stephan had done here. 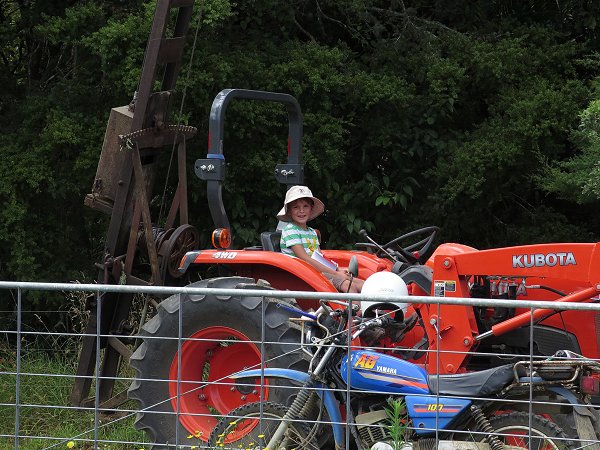 Louie went off with Stephan, first to get some more posts and then over the road to continue with the fence. 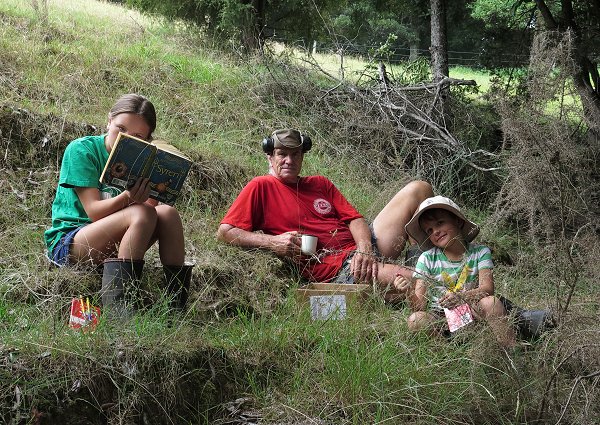 Stella and I made pikelets and took a Thermos of coffee for Stephan and drinks for her and Louie and walked out to see how they were getting on.

Stella also took her book.  Stella hardly put her book down for three days!  When they arrived on the bus we went straight to the Library and she found one of a series she's been reading, which wasn't available in her own library and was determined to read it all while she was here.  It always seems odd to me to ask a child to stop reading, but such things can be taken to extremes!

Both children also had their farm notebooks on strings, so they could write things whenever they wished to.  Stella, when she was very small, always carried one around so she could write cow numbers down, before she could write anything else.  It seems to have become something of a tradition. 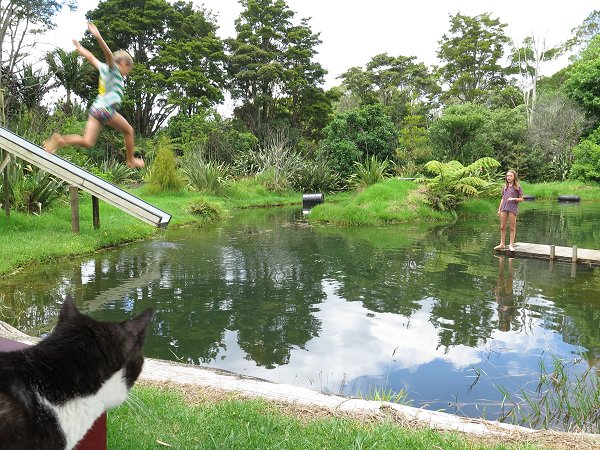 Louie, leaping from the high board.  He's now eight and still quite small, so his daring feats look even more impressive than they might if he were a bigger child. 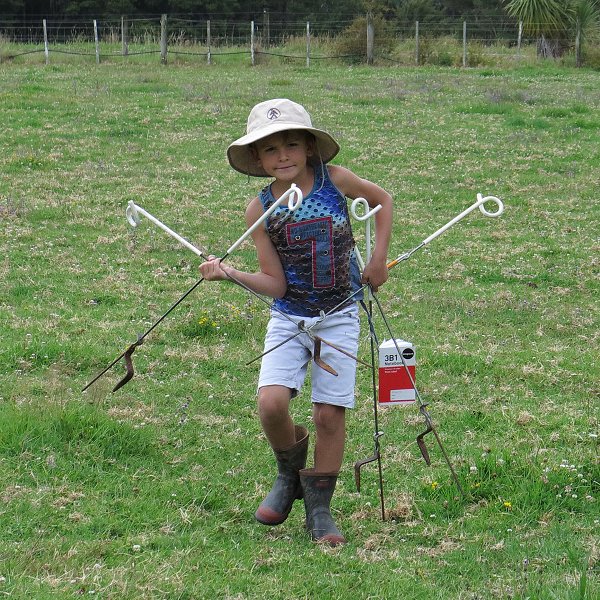 He hasn't quite mastered carrying fence standards, but no doubt that skill will come in time, too. 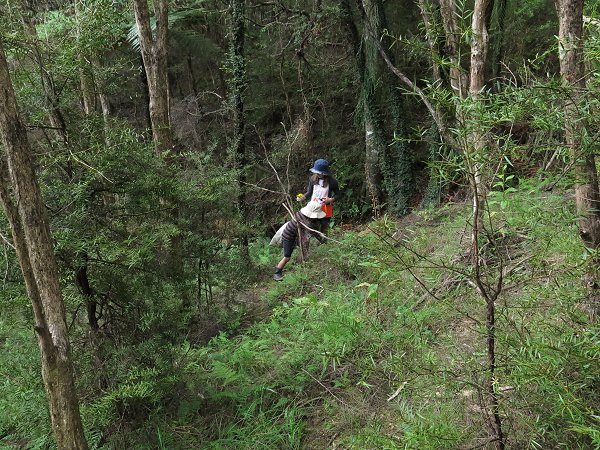 I've done a couple of ragwort forays in the Frog Paddock, but there were more yellow flowers still there to be found, where I'd not yet walked.  Louie and Stella worked together, one carrying the bag for the flowers and the other the cutters.  If they found seeds, they left them for me, since they require some skill in getting them into the bag without dropping any.

I feel that we are winning the Ragwort war, with fewer "hot spots" each year.  I've now concluded they're not nearly as multiply fertile as I have earlier feared and not every seed results in a plant. 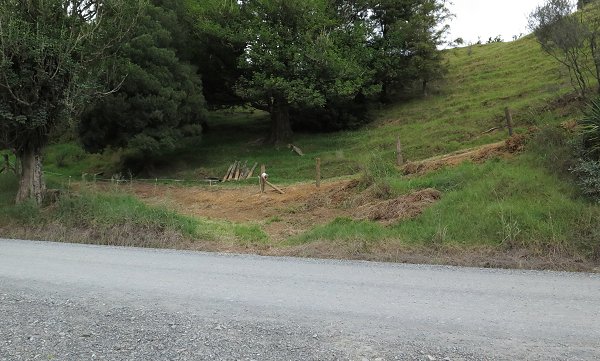 Stephan finished putting all the posts in and felt very pleased with his progress.