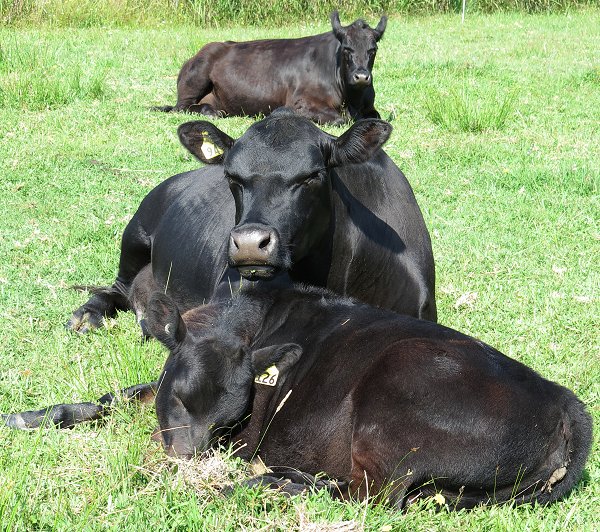 How certain animals become favourites: they're so lovely I notice them every time I see them. 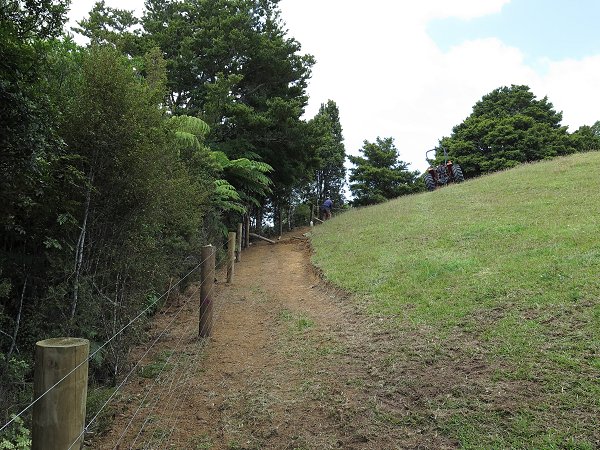 Stephan started battening the new section of fence Over the Road.  If you peer at the photo, you may see him in the centre, hammering in staples where the fence angles up the slope. 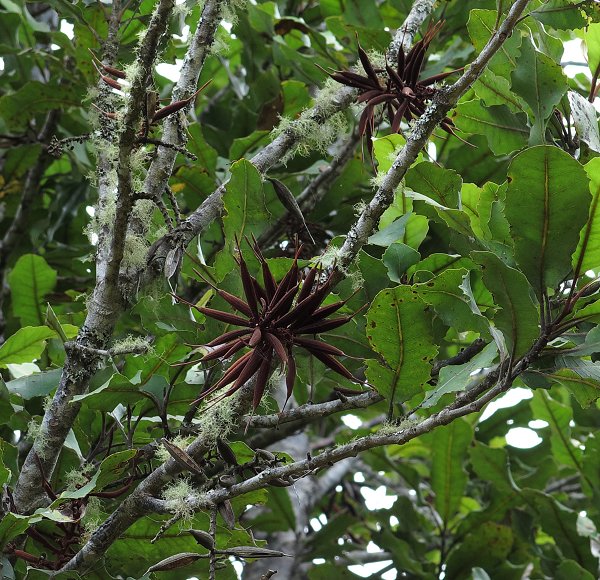 I walked up and stood for a while with him and saw that the Rewarewa trees, which grow up from the bank between the fence and the road, now have seed pods developing.  If I could reach them, I'd collect some seeds.  But the seedlings are easy to spot and gently transplant if I want to grow them somewhere in particular. 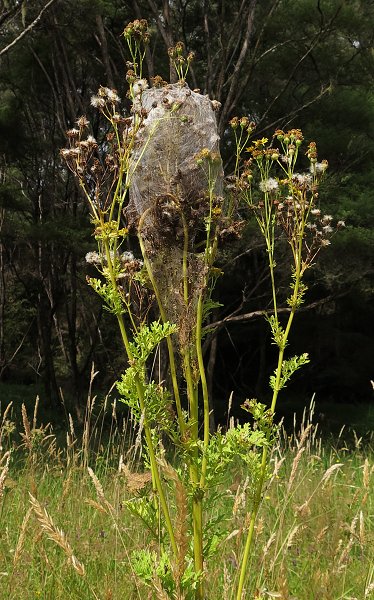 I went back to the Bush Flat paddock to clear the ragwort from along the stream-sides where we fenced those areas off last year.  This is a helpful method of seed control!  Thank you, spider.

I don't suppose the spider quite anticipated its home and entire new family being chopped off and thrust into a bag full of ragwort flowers and seeds. 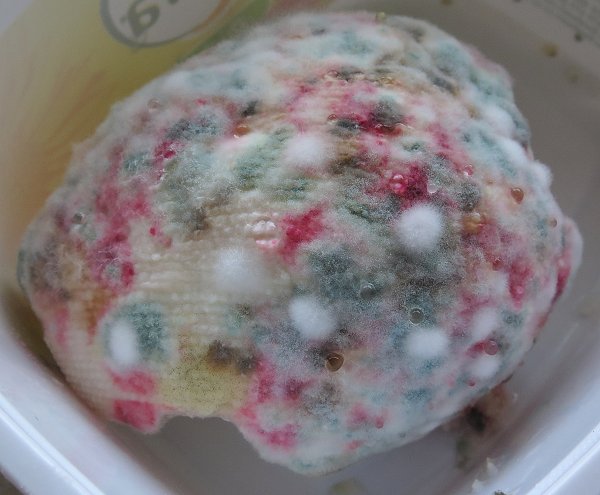 Some things get to sit in our fridge for rather longer than they ought and sometimes they become much more interesting as a result.  This colourful variety of moulds grew on a piece of forgotten cheese.  I didn't think anyone, including the pigs and chickens, had better eat this, so it went straight to the compost. 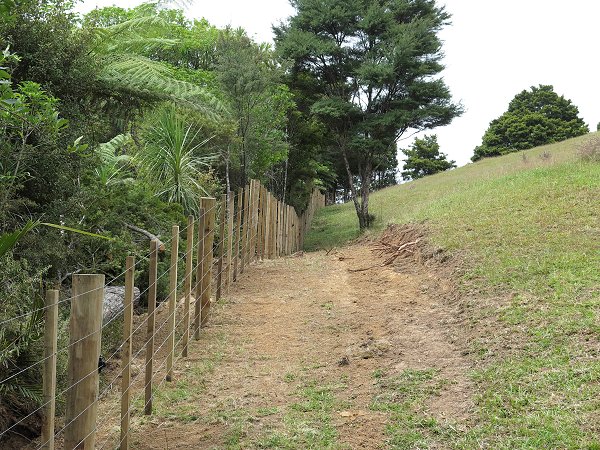 Because of the activities of the neighbours at this end of our property, this piece of fence most urgently required replacement.  There is an area near the bottom corner which could do with the addition of an electric wire along the top of the fence, to give it just a little more height in case some animal clambers up the bank somewhere, but otherwise, it should now be impossible for any stray cattle beast to get through. 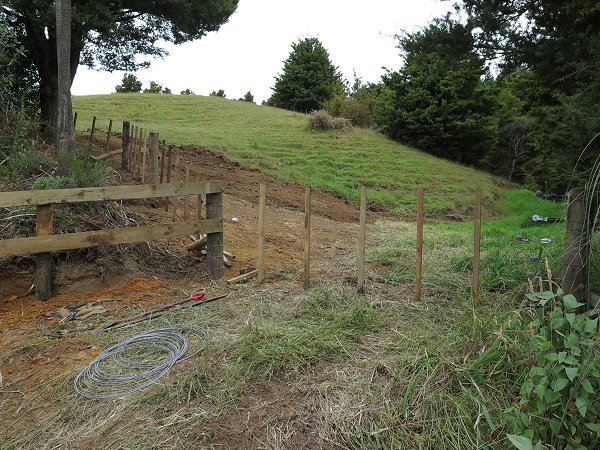 We think it was in this corner that stray animals which had been allowed to wander on the road had gained entry to our paddock.  Last year Stephan erected a makeshift gate arrangement here to stop animals getting up onto the bank and then jumping over the fence from the slightly higher ground on this side.  Today he removed that barrier and replaced it with some permanent posts and rails.

We no longer intend using the gateway in this corner but thought it wise to retain the option of putting a gate here again in the future, so the gateway is now effectively a separate little piece of fence.  It could be undone if we needed emergency access, but is not intended to be opened in the foreseeable future.  We'll probably run an electric wire along the top of the rails, the gateway portion of fence and up to about the second post of the paddock fence, to completely deter animals looking for bovine company in our paddock. 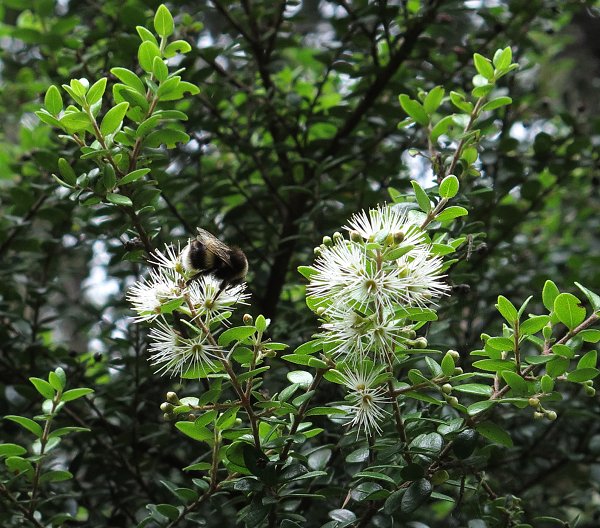 I went for a wander around the paddock while Stephan worked, looking for Ragwort.

The Climbing Rata, Metrosideros perforata, is now flowering and I watched this bumble bee as it flew around feeding on the blooms.

Lots of rain and wind today from the remains of a former Tropical Cyclone.  Who would complain about such a thing in a lovely summer like this?

Wet, with very strong winds today.  Cows don't tend to come on heat in this sort of weather, but still need to be checked, just in case.  Heifer 119 did come on heat in the evening, when things were a bit quieter.

I found evidence that Victoria 118 is still experiencing an active oestrus cycle, which supports my suspicion that she's generally well, other than the weird symptoms affecting her locomotion. 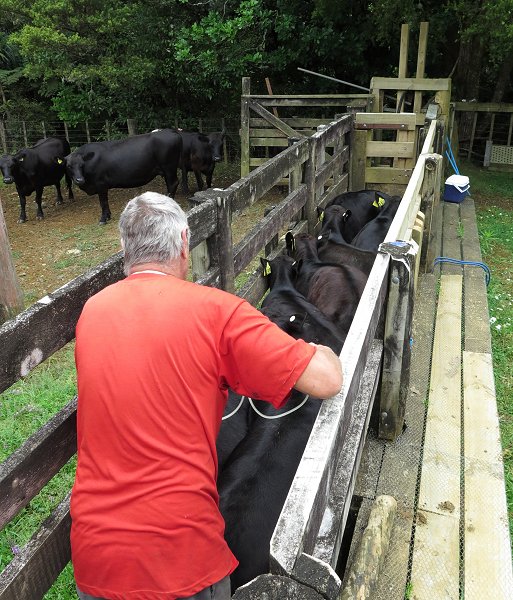 With some panic I realised I hadn't written on any calendar when the calves' booster vaccinations were due.  Fortunately I had remembered to think about it in time, but they needed to be done today or tomorrow to be within the maximum six weeks since the sensitiser shot.  We brought each mob in and put the calves up the race, Stephan gave them the injection and off they went again with their mothers.

I took the opportunity to do some reorganisation, since grass is getting a bit short around the farm and having three full bull mobs grazing separately will become difficult.  I tricked grumpy 96 into being left behind with the white-faced heifer 660, who has no calf, and took all the rest to the yards for the vaccination and then split those cattle into two lots and sent them out to join the other two bull mobs.  Grumpy bull then got the two two-year-olds as extra company and those four can stay quietly together in Flat 5, where I can see if anything interesting is going on without having to go looking for them. 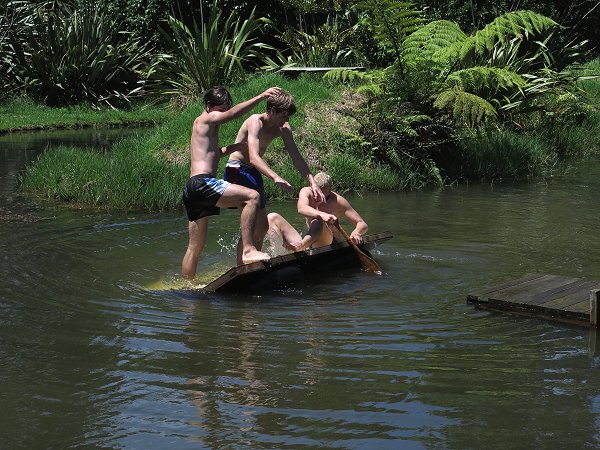 Stephan's great-nephew, Liam, is up for a holiday from Hokitika and wanted to come out to the farm for the day, with his German exchange-student friend, Thies and Kaitaia friend, Brendan.  They went out and helped Stephan with some scrub cutting and clearing for a few hours, then came back for lunch and a swim in the pond. 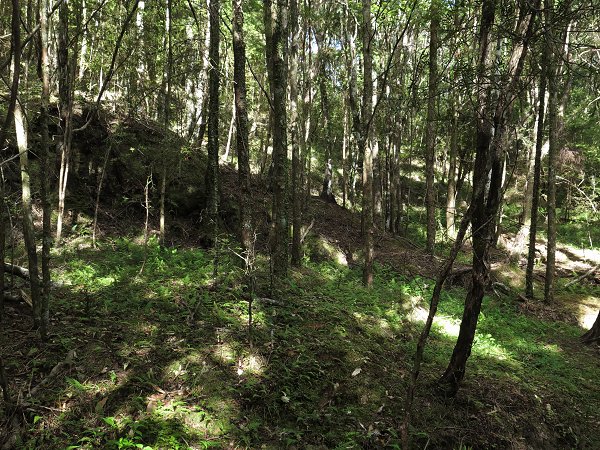 I was wandering around looking for Ragwort, again.

This treed slope is on the northern side of the stream through part of the Frog Paddock and will, wholly or in part, be fenced off as a reserve area, since it contains some Puriri Trees and slopes steeply down to the stream.  I've found Ragwort in here before, so knew it would need checking.  It's a very pretty place.  There is evidence of a number of land slides in years past.  Perhaps there was water coming up from underground springs, although it appears quite dry and stable now. 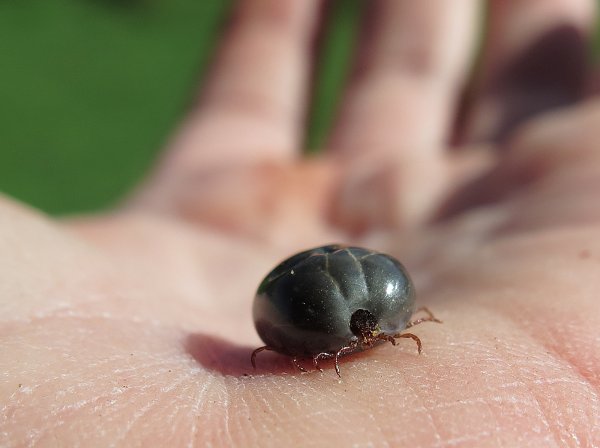 A full-of-blood cattle tick.  They are surprisingly agile in this state, able to move along on those spindly legs pretty quickly.  Left alone, this tick would have fallen to the ground from its cow host quite soon and then laid its eggs.  I squeezed it until it burst, killing it. 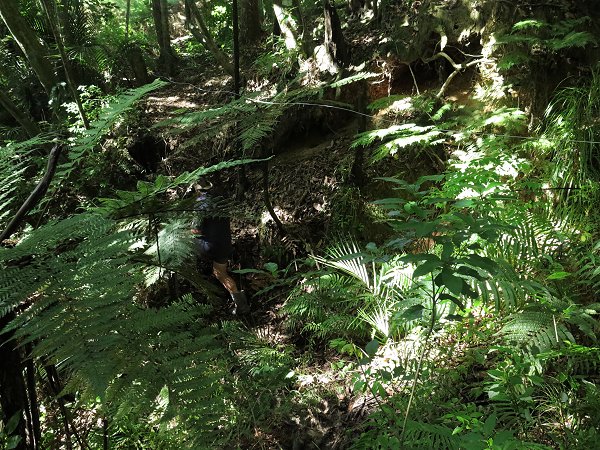 Stephan has begun working on the next section of the road-side fence and this is a particularly tricky bit, along the bottom of the fenced reserve.  There are a couple of quite deep spring-fed water courses - not a lot of water runs through them when the weather is dry, but they've created deep channels through the bush.

Until now there's been a makeshift lot of old fence remains, patched up with bits of netting, but since we fenced off the reserve, there have been no cattle on either side.  But the new fence does need to securely exclude any cattle which may be on the road, should they venture up into the bush.  We don't want wandering cattle in the area we have fenced off for conservation purposes. 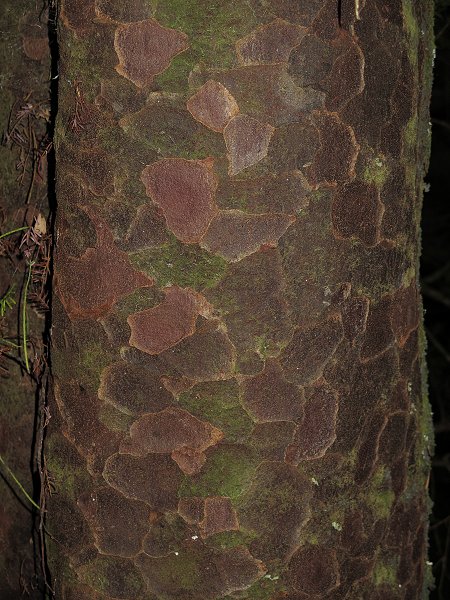 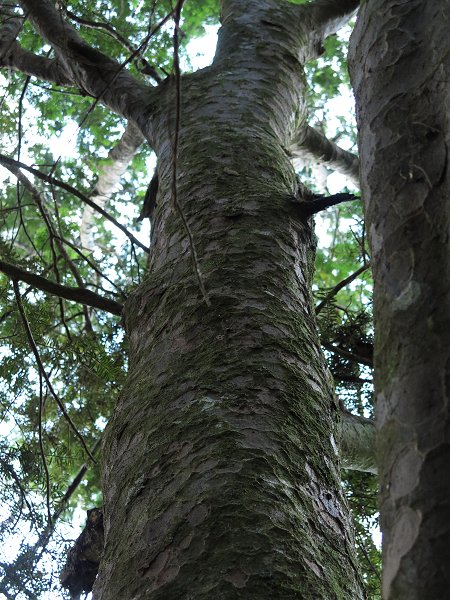 Walking around the Back Barn Paddock this evening looking for Ragwort, I found this tree: a Miro, Prumnopitys ferruginea!  I must have seen it before, but I don't remember noting its identity and presence here.  I know of only five (I think) around the farm, one of which is in Jane's bit of bush.  I like these trees a lot.  There's something so satisfyingly solid-looking about their trunks.