The week beginning the 9th of March 2013.
Saturday the 9th 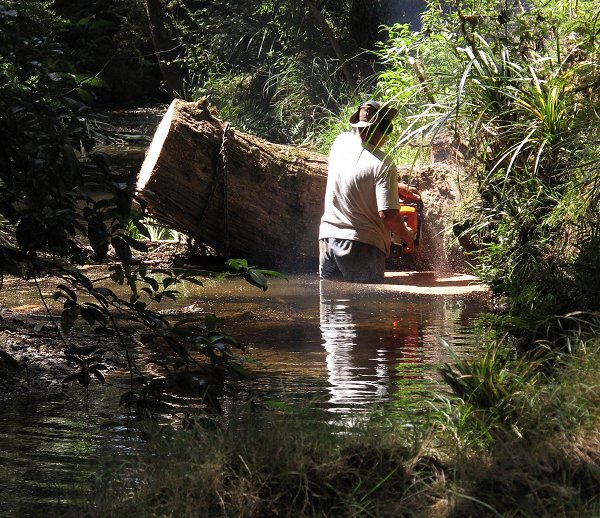 Stephan carried on clearing the big Totara trunk out of the stream this morning.  I took my coffee and a folding chair and sat on the bridge to watch him for a while but when he got up on the log to effect a different cutting angle, in the same safety footwear he'd (not) been wearing when standing in the river, I had to leave. 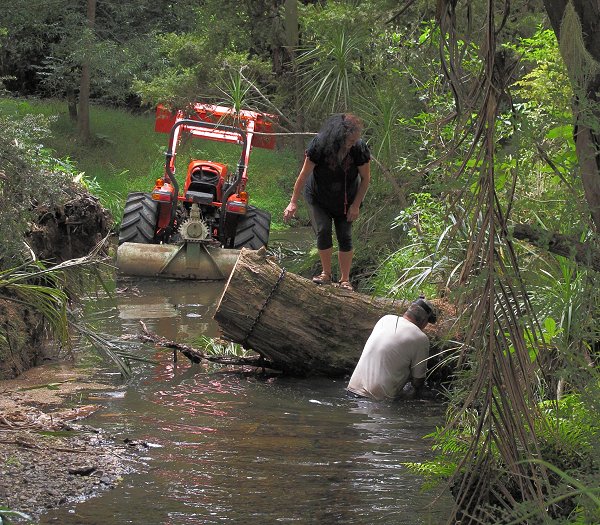 Lilo and Peter came to visit on their way home from town.  Peter and I kept our cameras clicking as Lilo added some weight to the end of the log while Stephan continued cutting under the water with a very large hand saw.

Nothing entertaining happened though, and I was looking the other way when the log eventually dropped. 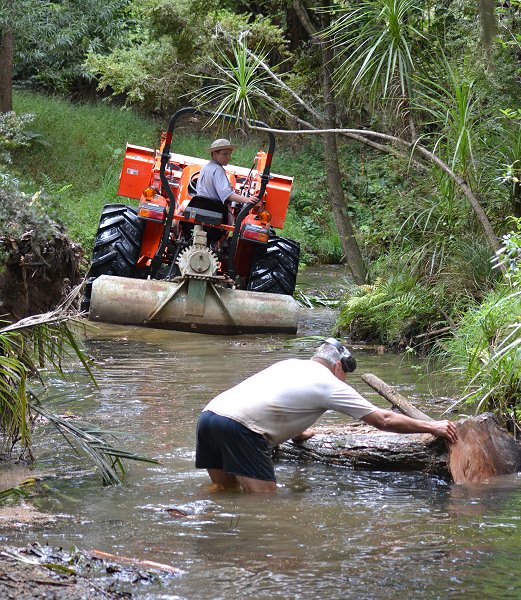 While Stephan made sure the chain stayed where it was needed, I drove the tractor to gradually pull the large log out of the stream and up the bank, where Stephan will investigate its use for wood-turning or other crafts. 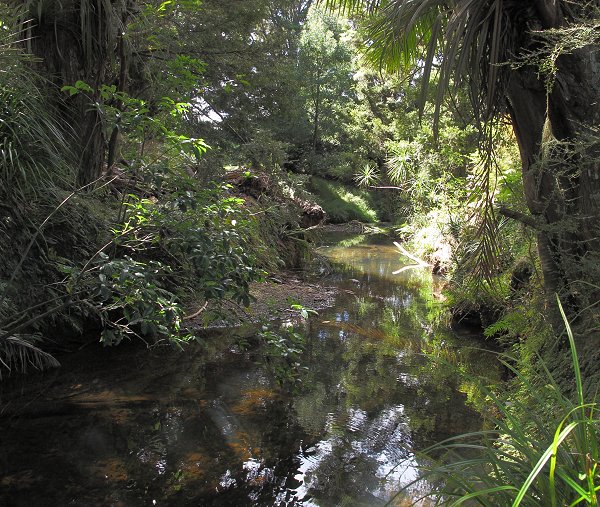 A photo taken the next morning, showing the cleared stream.  It was a big job and I'm glad it's done. 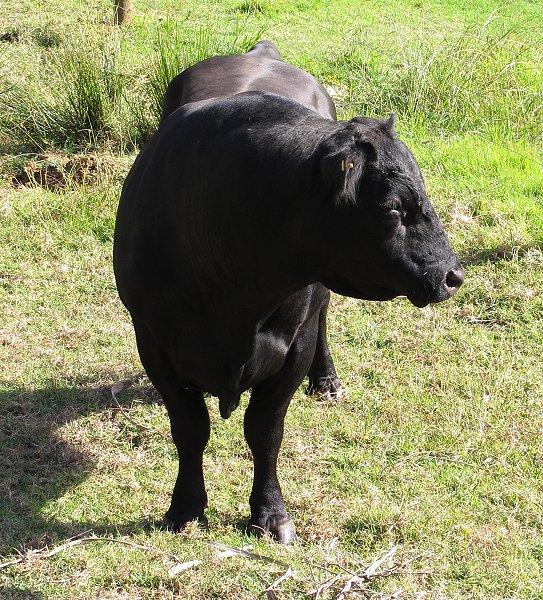 Stephan decided to mow some grass down by the pond and Joe 90 came over and growled at him.  Imagine mincing up perfectly edible feed during a drought! 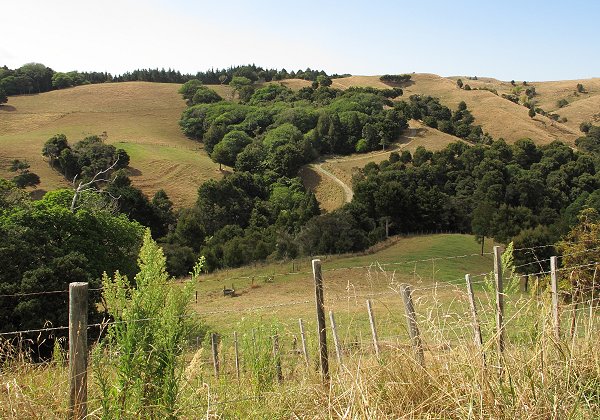 We went together this afternoon to our farm-sitting job.  I have been walking all the way down the huge hill and up the other side when there on my own, but Stephan took Brian's quad 'bike'.  I'm not keen on quads: damned dangerous things.

In the middle of the picture, where the visible track kinks to the left, Stephan had stopped to open a gate on his way to the very top of the hill.  (If you hover your mouse in the right place, it'll read "Stephan" where he was.)  The cattle were up on the ridge to the left.

There is no Kikuyu on this farm.  All the green bits are Paspallum. 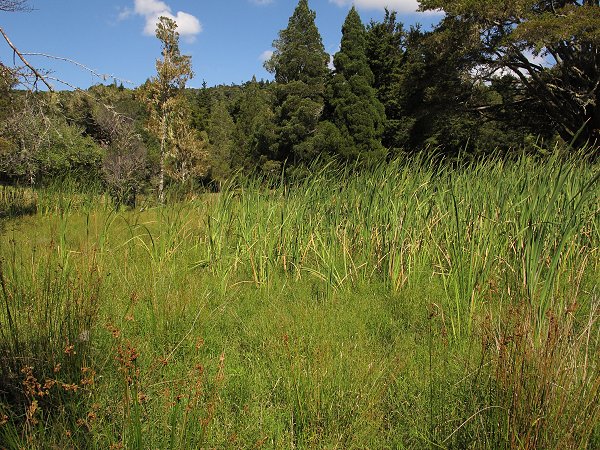 The lower part of the swamp in the Big Back Paddock.  Raupo (the tall reed plant) grows here and in the tributary on the other side of the culvert.

There is a yearling heifer in the middle of the photo, obscured by the Raupo.  The cattle are enjoying the swamp as they usually do, but possibly availing themselves of its various offerings a little more than usual because of the drought.  This will probably be the last time they have access to it, if the fencing goes to schedule. 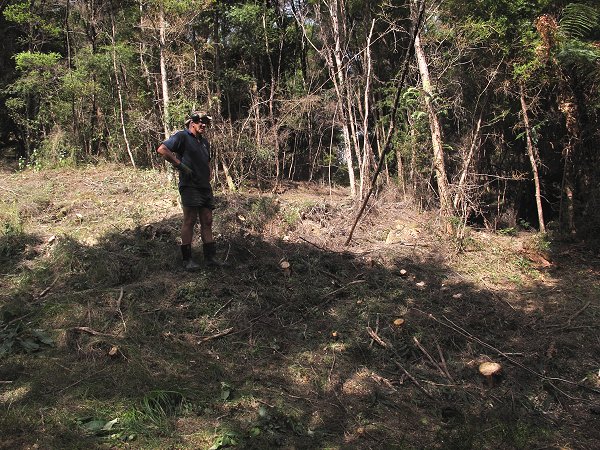 Along the edge of the swamp, Stephan was clearing scrub, working out the best places for the fence to run.  He needs to clear up the hill a bit so that when the remaining trees come down they won't hit the new fence. 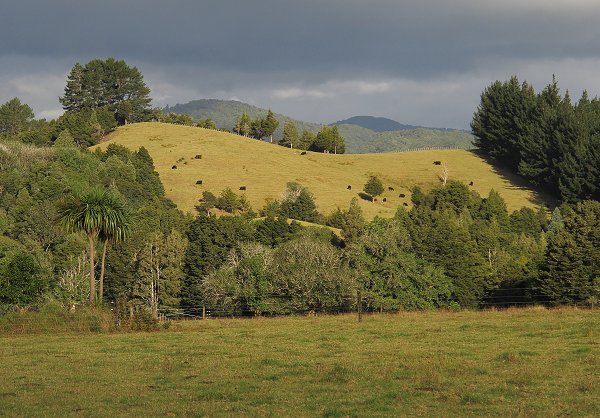 The cattle Over the Road have quite quickly changed the hillside from green to a paler yellow hue. 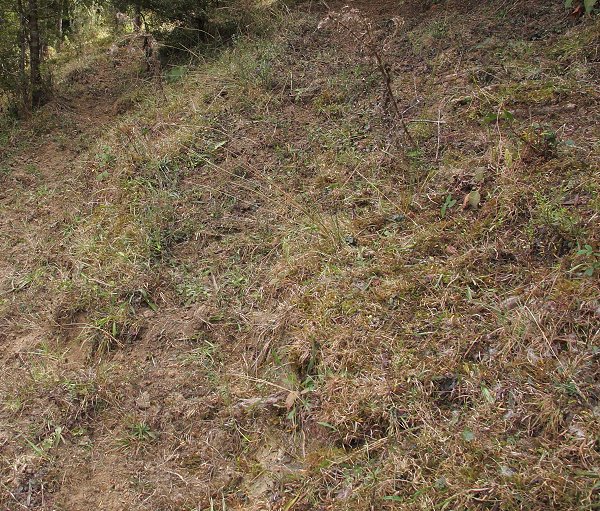 This is what the less fertile slopes over there now look like, particularly on the northern and western sides of the hill where it gets hottest. 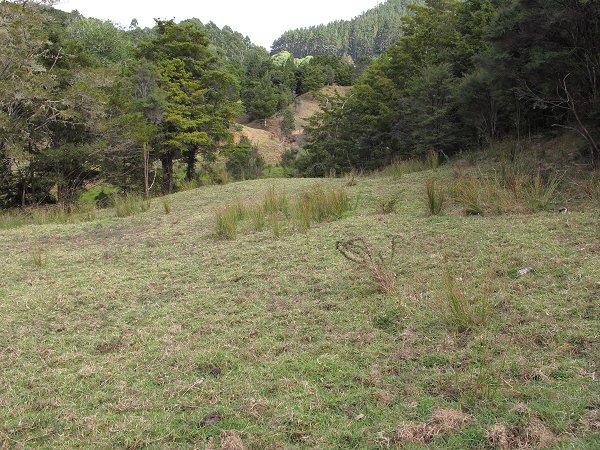 The Big Back is looking similarly chewed and dried out in places.

The swamp is going to look a picture.  Looking at the photos so far where the fence has been built, I'm glad we're putting electric fencing in because it's so much less obtrusive than the conventional post and batten alternative. 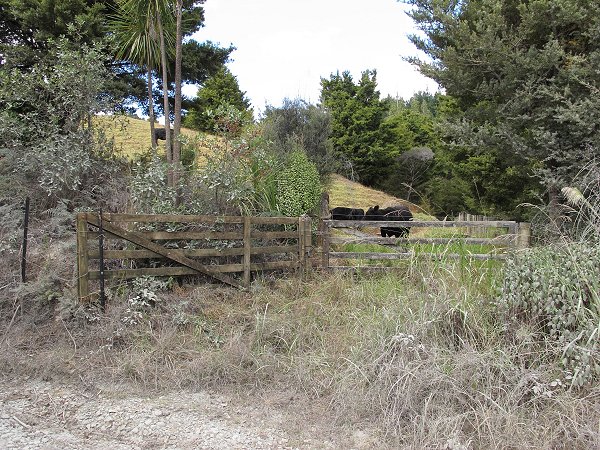 There are cattle on the neighbour's property again, presumably belonging to the guy whose animals ended up in our paddock with my heifers last year.  No work has been done to address the problem fence where those animals got out onto the road so they could then find a way into our place.

This evening we decided there was something we could do as a makeshift fix for the second part of that problem: Stephan drove a metal waratah (stake) into the bank and wired a spare wooden gate to it and the gate post, forming a barrier to any animal wanting to mount the bank on the roadside.  It was along that fenceline that we believe the trespassing animals accessed our paddock.  My cows don't try and get out of the paddock but the fence is obviously not high enough to prevent others from coming in.

We will replace the fence along the road, but other fencing jobs need to be completed first.  While the neighbouring cattle have lots of grass I'm not too worried about them wandering and ours will be out of this paddock before the other mob starts getting pushed for feed.  But, just in case, this modification gives me some comfort. 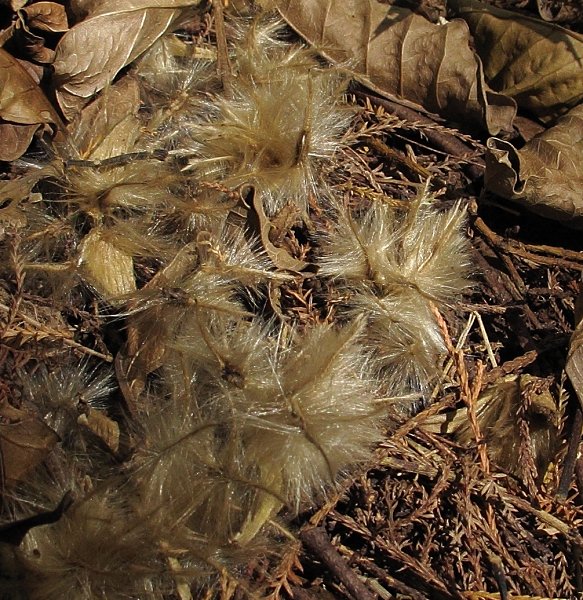 Up in the reserve area I noticed the fluffy seeds of Pukatea, in the same place I first found them in 2007.  The tree itself is really hard to spot in the canopy. 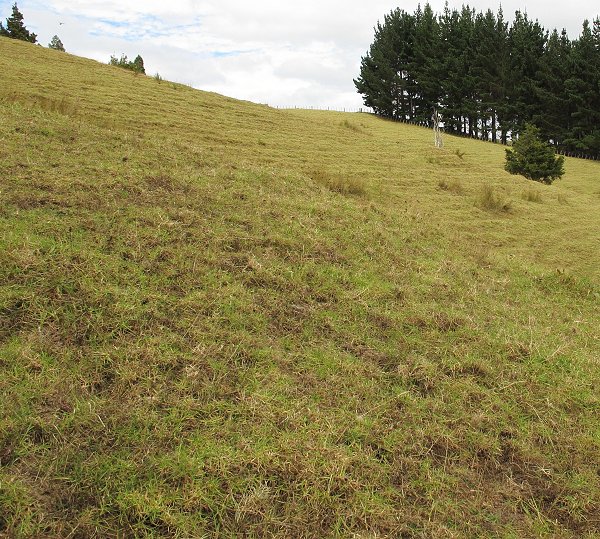 The only grass hanging on around here is the Kikuyu and it's a great plant, keeping a uniform cover over the soil in most places.  On hillsides it doesn't always manage quite as well, but with its fabulous root structure, at least it keeps the soil in place, even if it doesn't shade it completely.  There's not much left to eat though and the grass is crispy dry. 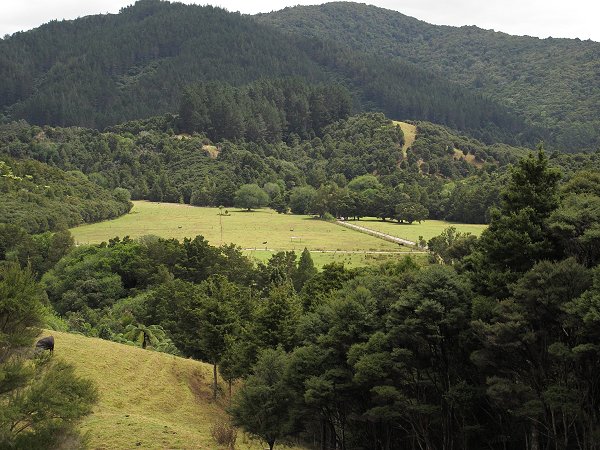 At least our hues are still green, not brown like much of the rest of Northland - or most of the North Island. 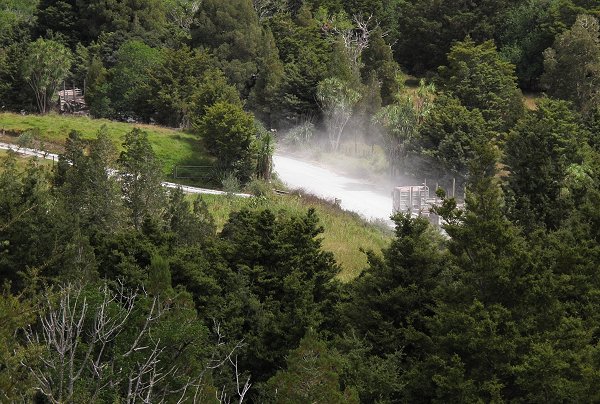 I heard a logging truck coming up the valley from quite some distance - possibly because there were actually two of them.  They have a 30 km/hr speed limit which they may or may not be sticking to, partly to reduce the amount of dust nuisance they create... 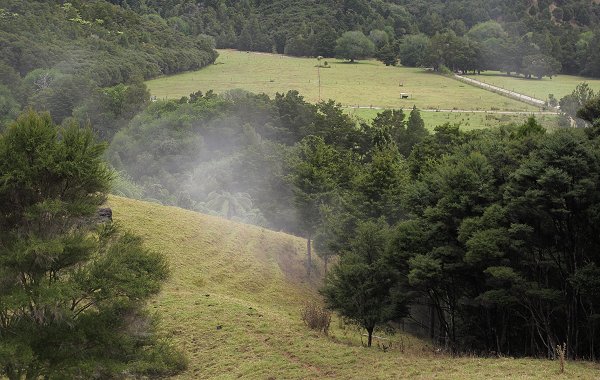 ... but it doesn't really make much difference.

Poor cows: not only dried-out feed, but covered in road dust as well.

We are not as badly affected as many of the residents of the valley where houses are close to the road and don't have buffer zones of big trees to filter some of it.  But we see the dusty haze across the flats on some of the calmer days. 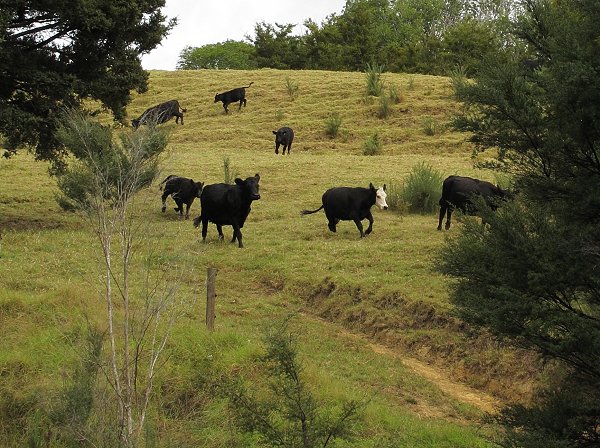 Time to move the cows and calves to the other end of the paddock.  The weather forecasts have been suggesting there'll be some rain over the weekend; there will finally be a gap between the persistent high pressure systems which have hovered over the Tasman Sea all summer, allowing an ex-Tropical Cyclone to slip down from the tropics and drag some wet air over us to relieve our dryness.  I need to balance holding the cows back a bit so there's a chance for some pasture to grow ahead of them, not letting them go for too long without fresh feed and anticipating a bit more grass growth if the rain does come.

Most of the cows came straight down the hill and through the gate and chomped the green grass with much enthusiasm.  But for cows which were presumably quite keen to be offered a fresh bite, some of them took a long time to respond to my calls. 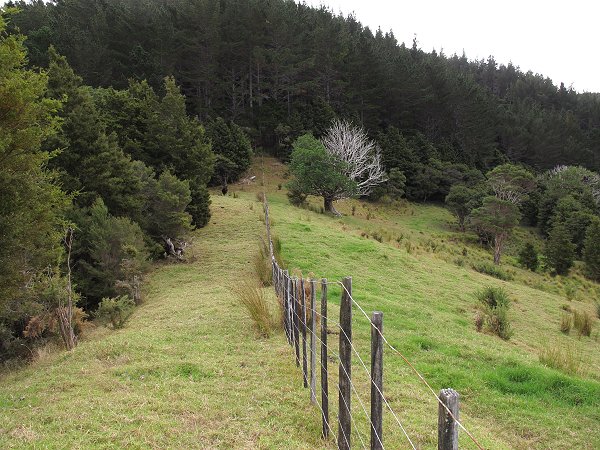 Out the back of the farm, the Big Back cows were ready to be moved for all the same reasons.  The Middle Back had quite a bit of green in it, but it won't last them for very long.  The clouds were gathering thickly and I really hoped they would bring the promised rain.