The week beginning the 2nd of March 2013.
Saturday the 2nd 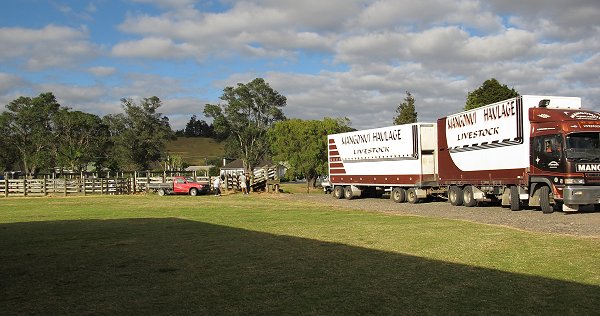 The majority of the Beef Cattle entries arrived on one truck, transport being provided and sponsored by Mangonui Haulage. 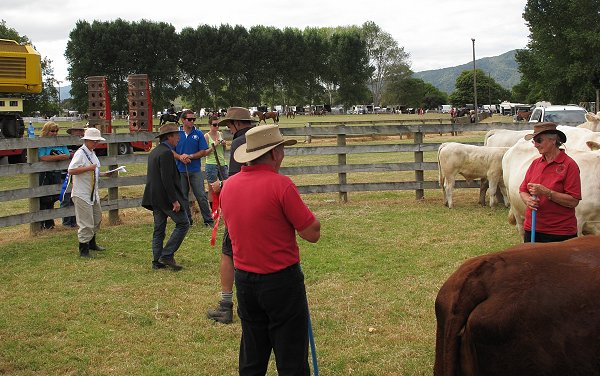 A few weeks ago I was informed that I was to be the Beef Steward (that's me on the left in the white shirt), and so I spent my morning in the yards, making sure the cattle which had been entered in the various classes were presented in the ring for judging. 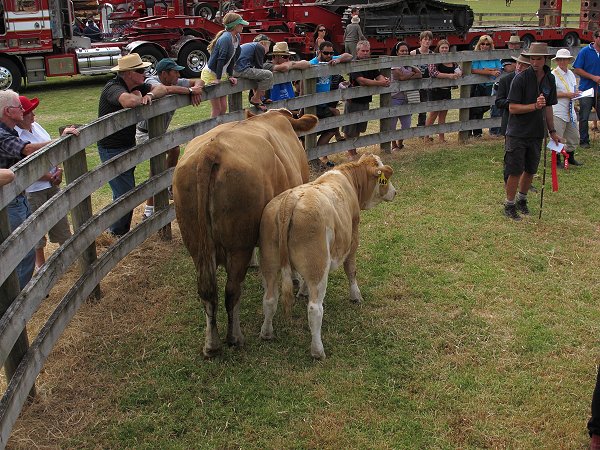 Stephan was my willing assistant, including taking on the role of photographer.

A small crowd gathered for some of the show.

Neither of us felt inclined to remain for long after the Beef job was finished, so when we'd had our complementary lunch we went home and Stephan went out fencing again. 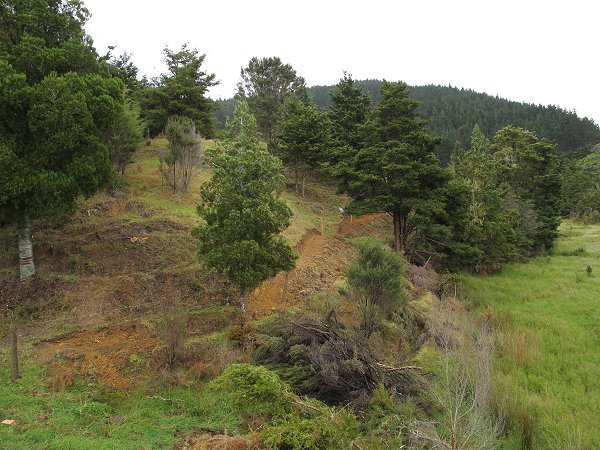 Stephan is a machine: all that earthmoving was done by hand!  All of those posts along the slope had to be dug in by hand as well, since the tractor couldn't get down there.

He's loving it, having wanted to subdivide this paddock for years.  When he first came here his plan was to drain the swamp and put a fence down the middle, but the swamp is of significant size and I think it will become a special feature over the next few years.  I suspect there's a vast array of creatures living in there and they will benefit greatly from having the place to themselves once the cattle are excluded. 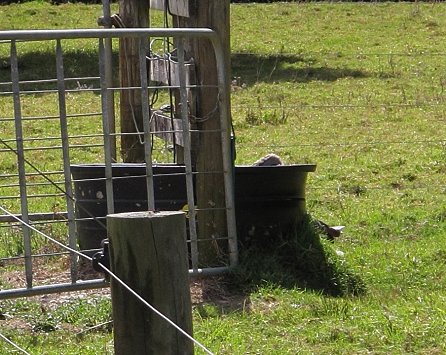 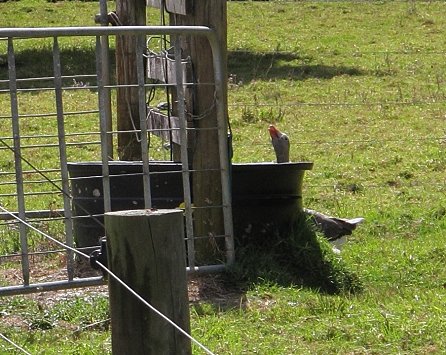 I saw the goose up by the gate one day and wondered where she'd been going.  I had also wondered about where she was going to drink, then not thought much more about it.  This answers both questions: she comes up to the trough and can reach in far enough for water. 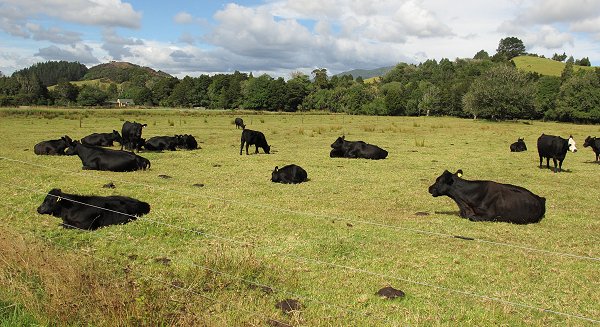 I'm slowing the cows down now, because there's not much feed ahead of them and I'm beginning to feel a little worried.  There's also the complication of a TB test this week, which means they have to stay on this side of the road until Friday and I'd rather have put one mob over onto the hill before then.

However, they seem to be more content than I'd have expected and I wonder if in needing less energy for internal heating their reduced intake isn't really bothering them much.  Or maybe they're observant and realistic animals and can see the predicament we're in and that there's no point in complaining. 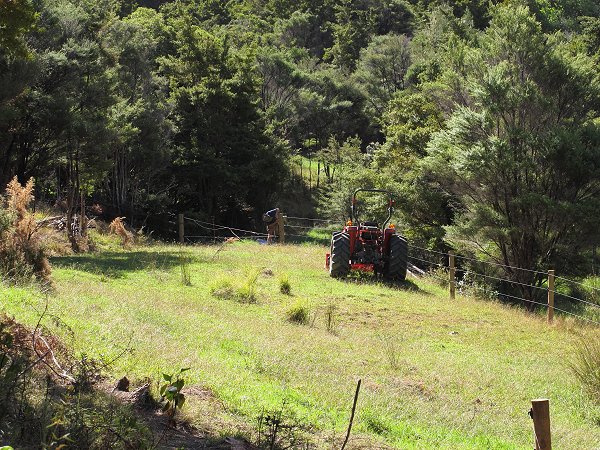 The fence on the south side of the swamp is now almost completed.  In the picture Stephan was attaching the electric feed to the tape gate activator. 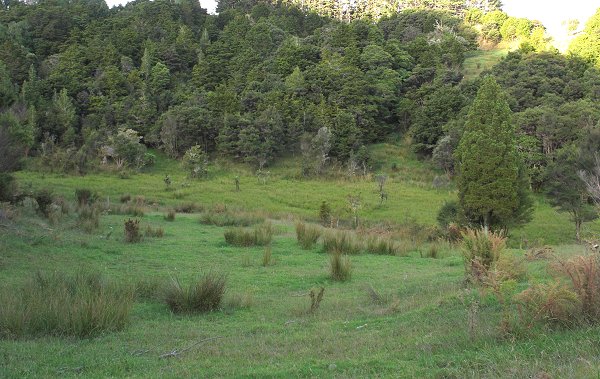 Looking down toward the swamp from a high point on the south side of the paddock, the fence along the swamp isn't really visible.  The Kikuyu (with rushes growing in clumps) is a darker green in the foreground, than the paler green of the swamp.  On the other side will be the tricky job of deciding which bits of the tree growth should be cleared and which fenced off for protection of the multiple water sources along that hillside. 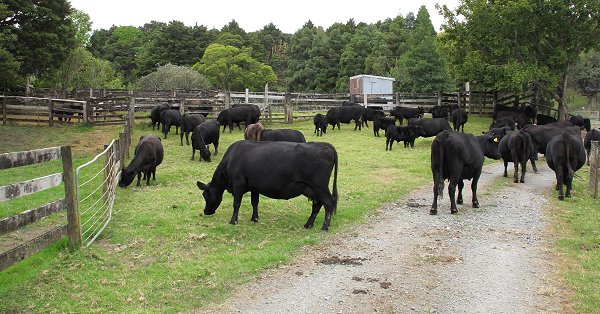 Another TB-infected herd has been discovered near Kaitaia (there have been a couple of other instances in the last four or five years), which has changed the Animal Health Board's approach to testing in this area.  We were formerly on three-yearly "surveillance" testing, having to present only breeding animals over two years of age; now all breeding herds within a ten kilometre radius of the town centre have been put onto annual testing and we have to present all animals over a year old.

While it's a definite inconvenience, this is about the best time of the year for us to have to do this, with mating finished, the cows and calves in two big mobs and the ground conditions nice and dry. 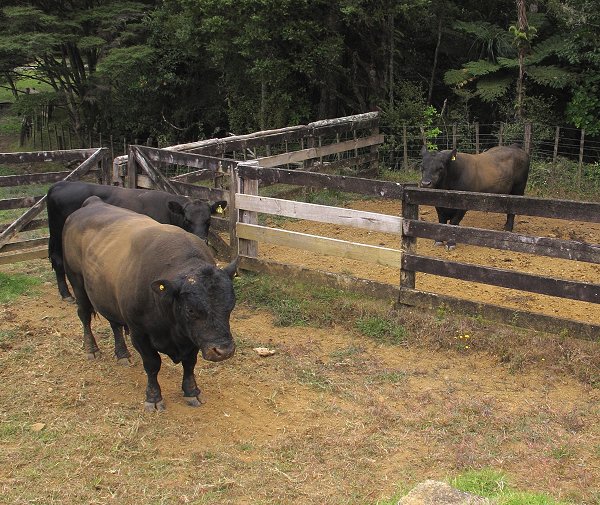 The bulls were not easy to deal with, suddenly thrown too closely together.  In their separate pens they pawed at the soil kicking dust up all over themselves, causing clouds of it to float around the yards.

Our test time was 11.30, but as we were obviously not the tester's first herd for the day, we were not surprised when he didn't turn up until 12.15 - and we'd been ready early, just in case.  But Jeff, when he arrived, was an absolute delight.  He had a quietude about him which allowed him to get as near to the cattle as I can, which is unusual for a stranger amongst them.

Today's part of the process involved the cattle all having a tiny injection in the side of their tails, up the top where they bend down from the spine.  Jeff will return on Friday to check for reactions. 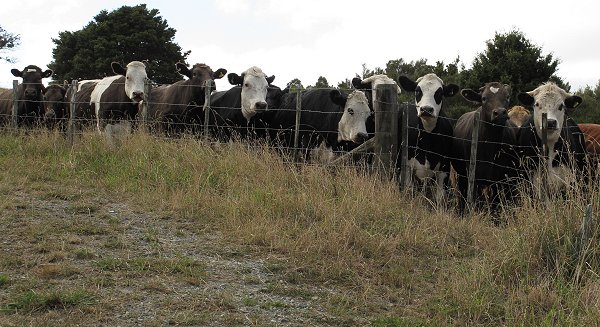 After some late lunch and a bit of a break, we headed over to our farm care-taking job.  We decided to go together for the first visit, in case there were any problems and so that we could remind each other if we'd forgotten any details.

These big steers were the first we had to move and it looked as though the job would be a breeze when they all came to the gate; except when we opened it, they all tore off around to the other end of the steep paddock.  However we eventually prevailed, sending them on their way to their next assigned grazing.

The other mob, of 56 younger steers, was just as nutty, but we tricked them out of their paddock and away up the lanes to the next.  Cattle know their own people and get nervous around most strangers. 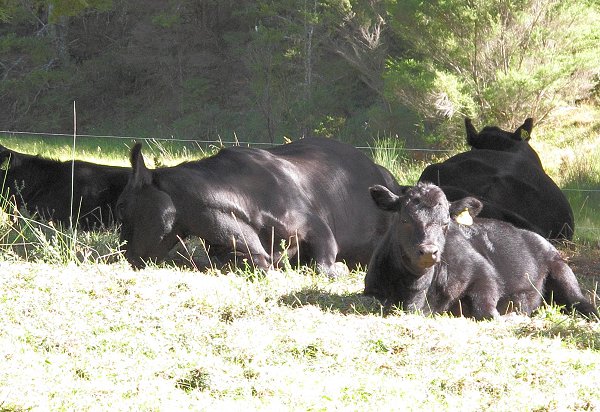 I had to lighten this photo too much for its brightest areas to show 571 in her odd position.  I would guess she was sleeping, but it was a funny way to lie. 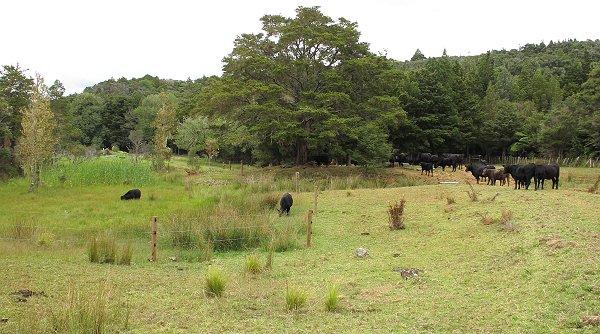 This is the Big Back Paddock, with the new fence running down the south side of the swamp.  There's a tributary into the swamp from the Marko Buselich Reserve next door (to the right) and that piece has yet to be fenced.  It seemed most sensible to take the fence straight across that tributary and then separately fence around it later, which will require smaller posts than if the strain of the whole fence went around the sharp corners.

The cows are standing on the track, with the closest ones on this side of the culvert and it is from the swamp fence to the culvert that the extension will be built.  At present the new fence is high where it runs straight across that area and there's enough space underneath for some of the calves to slip through to the other side.  When the small arm is added there will be no such gaps open to the animals.

The wet bit on the other side of the culvert (from the reserve) will be fenced when the boundary fence is replaced, which will be the next major job after the other side of the swamp is finished.  The swamp fencing takes priority because the Northland Regional Council Environment Fund contribution has a time limit for the project's completion. 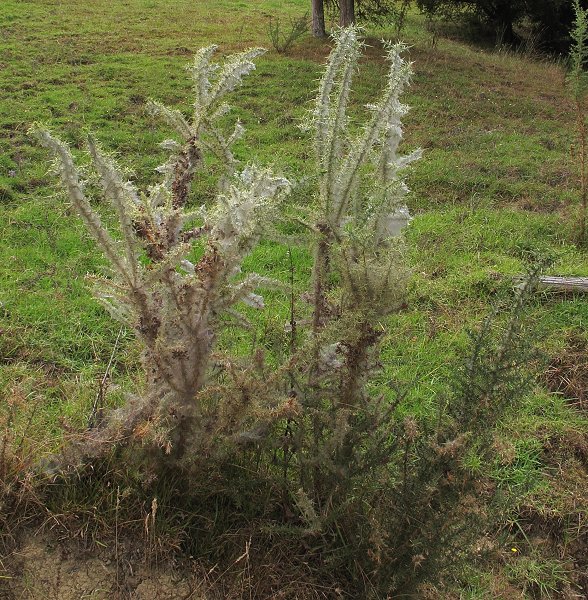 The Spider Gorse-mite really expands its population quickly when the conditions are right: compare this with two weeks ago.

They may soon be ready to send out colonising groups.  I might come and cut a branch, or catch some in a jar and take them somewhere else. 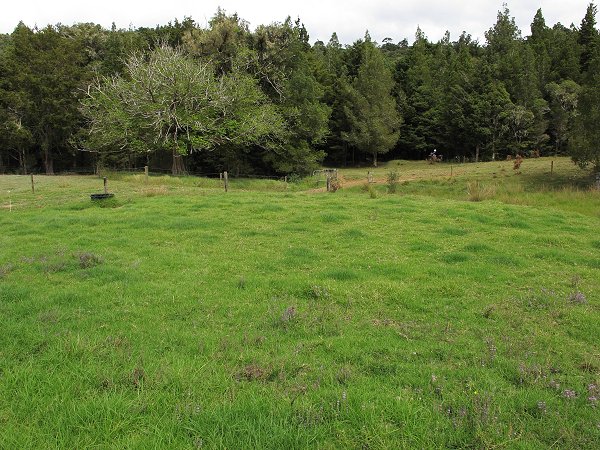 During droughts around here things can stay relatively green, due to the Kikuyu grass.  How well it grows depends on its length (and energy reserves) when there's a little bit of rain and obviously this paddock was in the best state to make the most of it whenever those scant showers fell.

This part of the Big Back paddock will provide one of the mobs of cows and calves with a nice few days' feed after the TB test reading tomorrow. 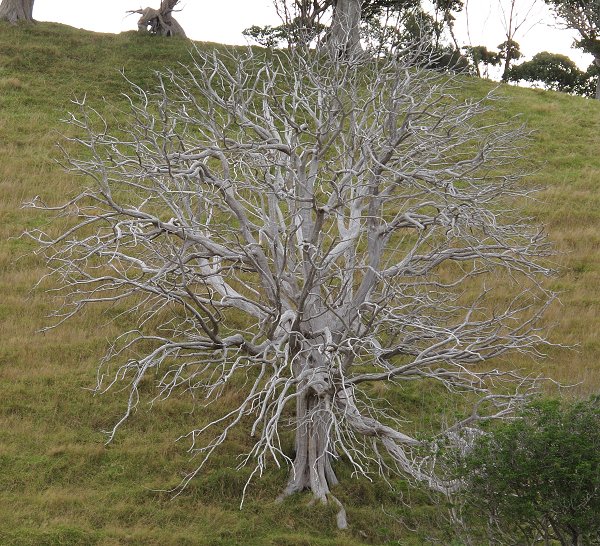 Back to move the cattle on the holidayers' farm and I noticed this tree on the neighbouring property: the skeletal remains of a Puriri.  But even in this state, it has a distinctive beauty.  I used to try and draw trees to look like this when I was a child. 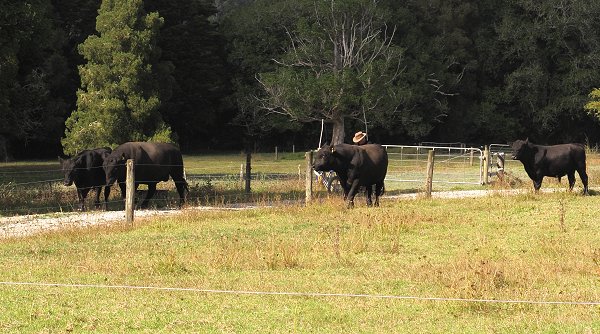 We brought all the cattle back to the yards again this morning.

Why do I have six bulls?  Because I can.  There's only one I haven't used (113) and he'll go straight to the works when he's ready, because he's not as good as I thought he'd be and has far too much of his sire's poor temperament.  The others all have progeny on the ground or on the way. 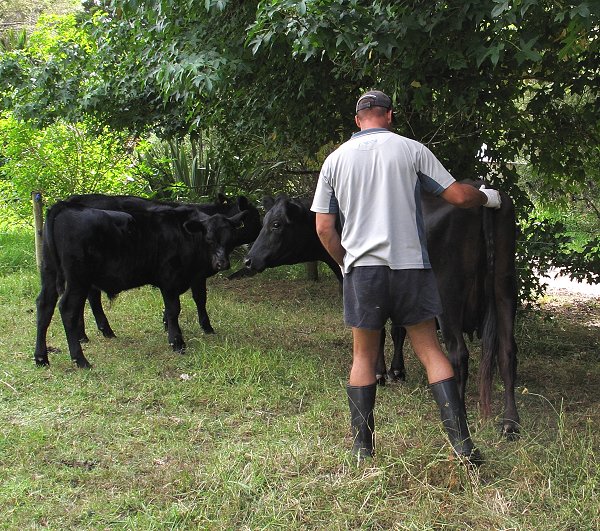 We put the bulls up the race for Jeff to check, and then he wandered around and checked most of the cows in the open yard, as I ticked off their numbers in my notebook.  The few heifers he couldn't check went up the race afterwards.

Then we walked over to check Zella and Dexie 101.  It's good to confirm that our house-cow doesn't have TB, that being one of the major diseases people can catch from unpasteurised milk.

The big worry about Bovine TB being in Northland is that it could get into the possum population, possums being a major vector of the disease.  Possums don't just eat trees, they're scavengers of anything going, from live bird chicks in their nests to bits of TB-infected dead cow and their own relatives as they drop dead from TB infections.  Northland possums have never carried TB because they didn't arrive in the region until after TB had been eradicated from the cattle population - I still remember the first possum I saw on Taipa Bridge (over on the East Coast where we lived) one evening in 1980.

Because of the climate and the tracts of native bush around Northland, TB in the possum population would seriously change cattle farming here.

With a clear test, our TB status remains at C10.  We should really be over C (for clear) 20 by now, but the system doesn't go that high. 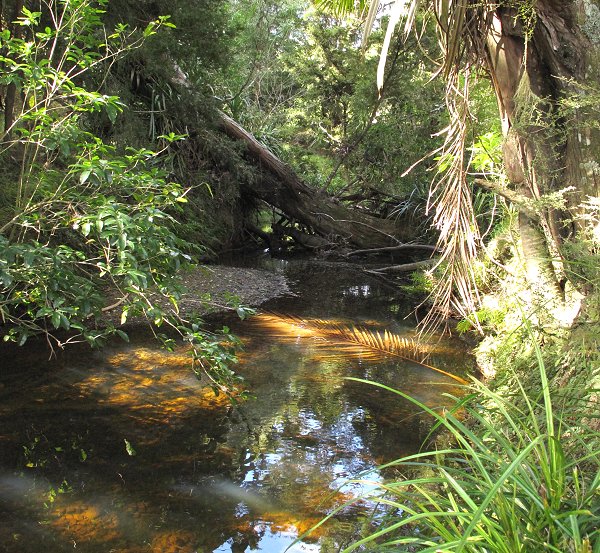 A few metres downstream from our main bridge is this problem: a rather large Totara tree has gradually tipped over and across the stream.  It has caught all sorts of debris in the last few floods and must restrict the water flow considerably.  Perhaps if we'd cleared it away earlier, Demelza might have been pregnant for three weeks longer, because the latest flood-water might have gone down more quickly so we could get across to the yards! 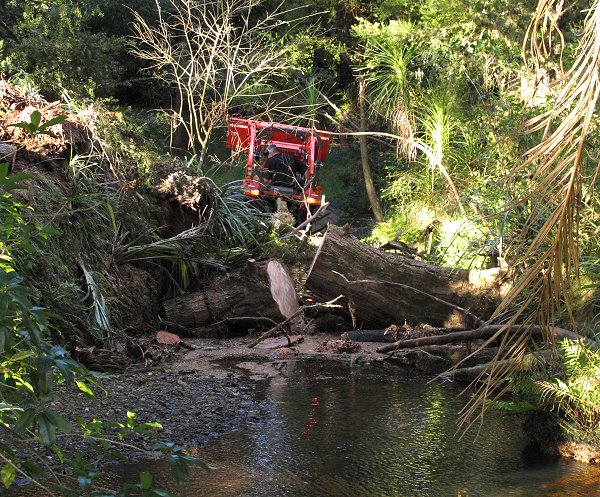 This is an excellent time of year to do this sort of work, the stream level being a bit lower than usual and it's unlikely to rain before the job is finished.

Stephan mislaid his own tractor key and I had to lend him mine and look what he did: drove the tractor into the river!

He had spent some time cutting the top and branches off the tree, some of which Jane took away for firewood on her trolley, then got on to the main part of the log and chopped a large section away, which then had to be dragged out of the stream with the tractor. 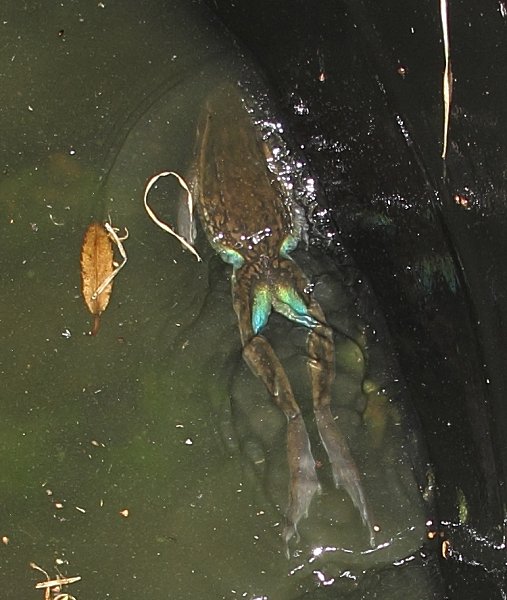 I haven't used the Road Flat Paddock for grazing since the neighbour's puny calves got in there a year ago, but we might have to use again now if it doesn't rain soon, so I went to rediscover the water trough.  Siphoning it out was entertaining, with all sorts of gunk at the bottom.  Fortunately this large frog didn't get caught in the hose before I noticed it swimming around.  Everything is so dry that I decided to leave it where it was, with the hose draped over the edge of the trough in case it wanted to get out - I'd removed a lot of overhanging grass which it might otherwise have had in mind as an escape plan.