We had a couple of lovely visitors today.  Mel and Kev were referred to me by Kim and Paul who bought some heifers and a bull several years ago.  Mel and Kev are new to farming and have selected Angus as their preferred breed of cattle, so today they came for a look at cows and an opportunity to ask a lot of questions.

I think they thought I would have a list of cattle they could buy, but I haven't quite made those decisions yet and I got distracted by thinking of all the things I ought to tell them about farming and cattle basics, before they start.  Maybe I should do this for a job!  I'd love it. 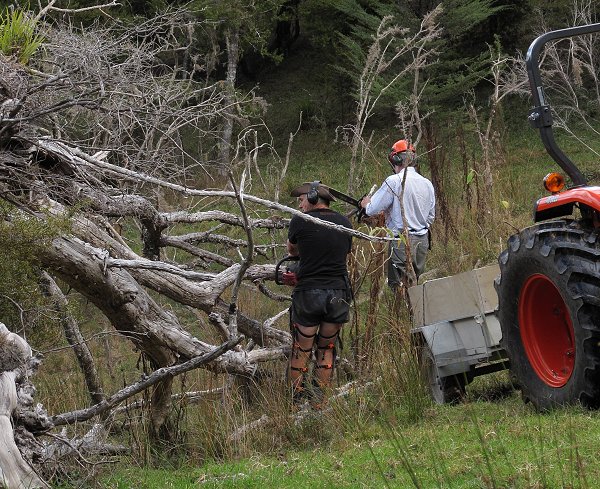 William came out with his trailer to collect some firewood, this time going out to cut some of the fallen Puriri in the Big Back.  Stephan towed William's road trailer with the tractor, since the terrain isn't quite car territory up that hill.

Good to see chaps in chaps - the protective anti-chainsaw sort, in case something goes wrong.

Stephan and William have always worked happily together, since they were both in their twenties and Elizabeth and William were married.  They're great fun to be around, even though their humour can be pretty variable. 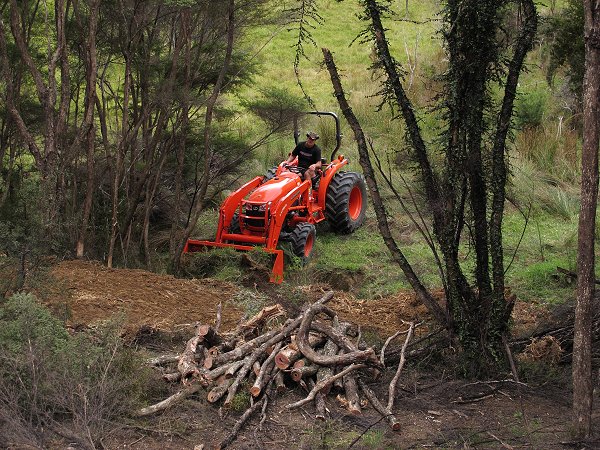 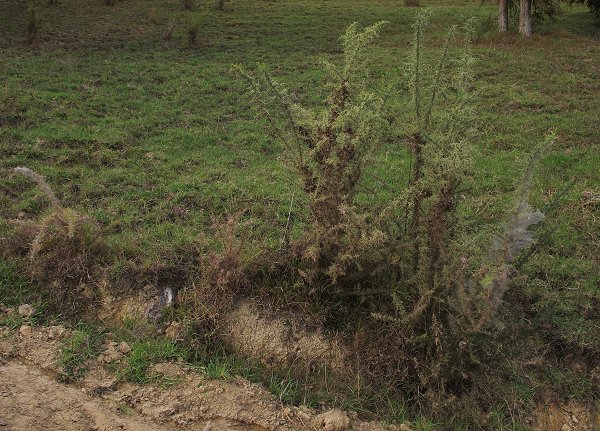 The gorse-mite gorse bush again, now the mites have left the first branches they colonised and spread to the others.  Unfortunately the lighting wasn't terribly good when I took the picture, but the faded colour of the branches in the middle is due to the work of the mites.  They don't kill the plants, but they weaken them markedly.  I think that if the mites were active all year, the plants would not flower and so the gorse would not seed, and presumably would stop growing much until it ran out of energy and died.  That would be great.  Sadly the spider-mites don't thrive in our usual climate. 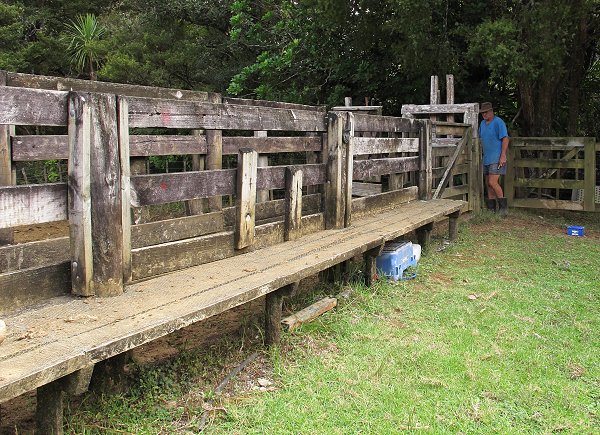 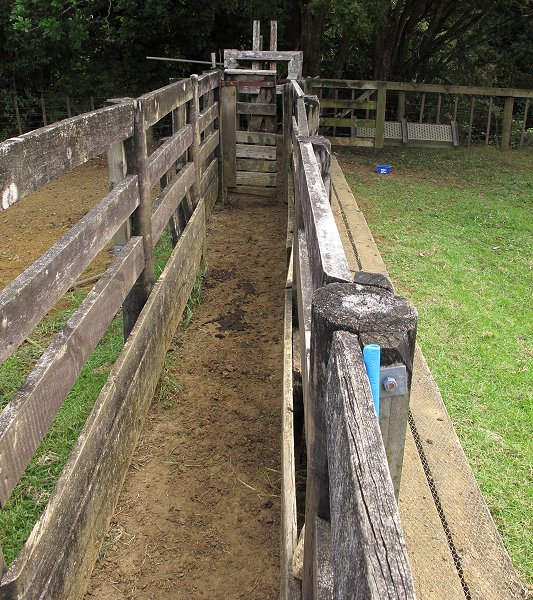 Except things are not quite as good as they seem, because the third post up on the right is broken at ground level.

Last Friday I was nearly hurt when a cow bumped the side of the race and on Sunday afternoon I carefully put the other mob through for their copper shots, but I don't want to continue taking chances like that.  Potentially an animal might do something which will cause the whole lot to collapse in splinters and chaos and somebody might get hurt. 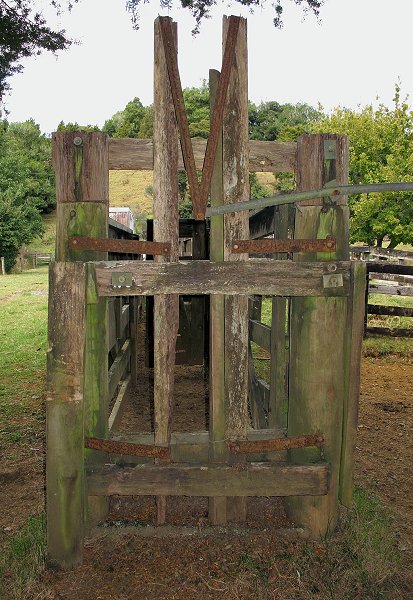 The head-bail is also in need of renovation.

Before the tractor purchase became an urgent priority, we had intended to start building new yards, which would have included the purchase of an easy-to-use head-bail; but now we'll have to make do for a couple or three more years.

A head-bail is not an every-day-use piece of equipment, but when you need it, the need is usually urgent and to do with alleviating some problem which would have welfare implications if you could not restrain and treat an animal.  We will also need to use it sometime in the next couple of years before the grace period for "capital stock" (the breeding cows), expires for the insertion of their NAIT tags.  For the adults who remain by then, NAIT tags will need to be placed carefully into their ears.  Those who leave in the mean time for the works can have them applied anywhere in their ear, since they'll only wear them for a day or two and Stephan can tag them in the race as usual. 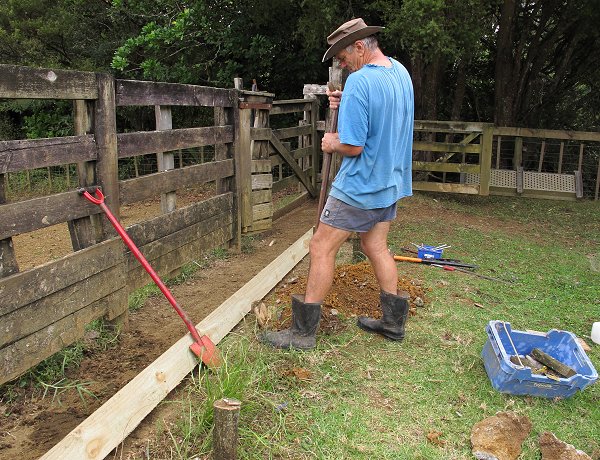 While Stephan gathered tools, I went and brought bulls 96 and 116 in to give 116 a copper shot before he leaves on Tuesday.  I was very careful!

And then Stephan started what looked like demolition.  The first job was to dig out the base of the broken post, which ended up being an easier job than he'd anticipated.  He built these yards 35 years ago, so they've lasted pretty well. 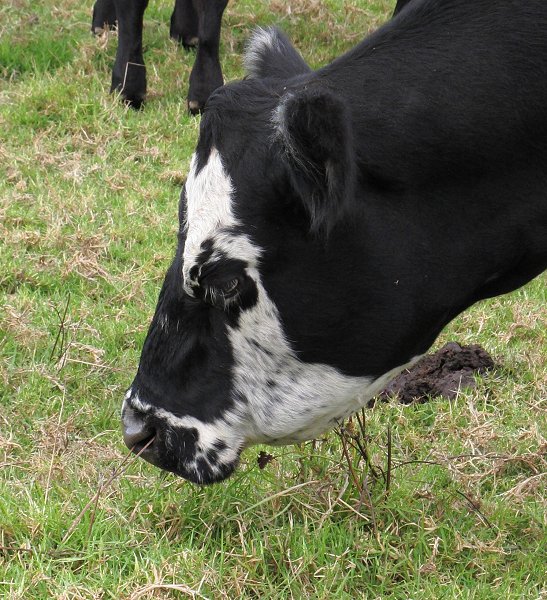 I noticed 470 standing very still with her head down and eyes half closed; then saw she had sticks up her nostril.  She must have managed to prod exactly the right spot and remained, blissfully, like this for several minutes.

When I moved and she notice me, she opened her eyes properly, as if awaking from a trance, then moved her head. 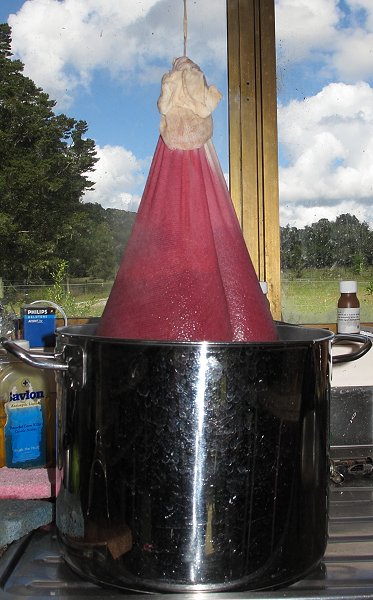 I didn't pick very many blackberries this season - kept putting it off, getting busy with other jobs, waiting for Stephan to go out and do it ...  This week we opened the last jar of Blackberry Jelly and I really regretted my laziness.  But then Stephan extracted a stash of frozen berries from the freezer, some of which were the few I'd picked and the rest from the previous season.  He had decided to save the blackberries until the apples were ripe, so he could make jelly wholly from our own fruit.

This was two kilograms of berry and apple pulp, draining for the day. 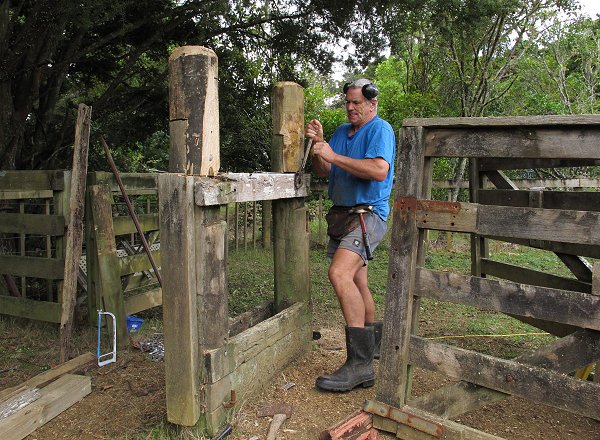 The remains of the head bail.  Some of the timber is still good and solid, but anything holey or flimsy will be replaced. 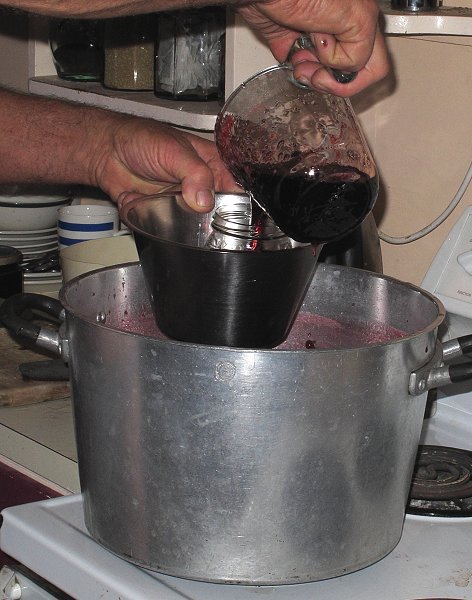 The jelly, after boiling the fluid drained from the pulp during the day.  This made eleven jars and there are still some berries in the freezer, so I think I'll get through the year.  I used to enjoy honey very much too, but my teeth have become too sensitive to the intense sweetness and so Blackberry Jelly is now my preference. 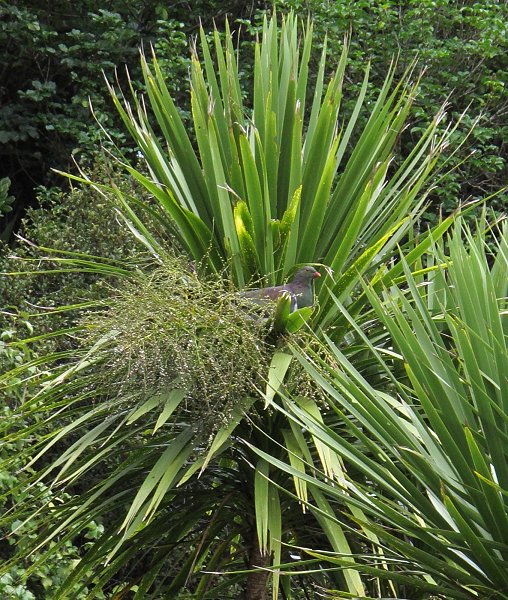 A Kukupa in one of my Ti Kouka on the river bank.

I usually end up with the "Twelve Days of Christmas" song in my head when I see this sort of thing.  When you grow up in Aotearoa, you have alternatives to A Partridge in a Pear Tree. 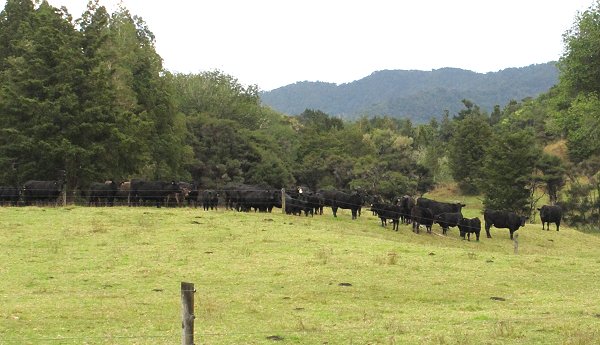 The 41 cows and calves in Mushroom 3, where I'd left them a little longer than they were happy to stay.  But there's not much grass ahead of them to go on to.

I began to feel like a full-time employee of "Wooden Recorders": I've been renovating a website for Ted Crawford, who is the New Zealand agent for a couple of European makers of high-quality wooden recorders.  Ted found me by word-of-mouth when I started hosting other people's websites a couple of years ago.  My rates are better than he could get through his original provider and while I had intended to simply host his site, he soon asked me to get involved with updating and then renovating the whole thing.  As I publish this page, you'll be able to visit the site as it currently looks in its old form (no longer available).

Now I have finished all that, anyone else want anything done?  I have a "reseller" account with the company which hosts this site, which allows me to legitimately host other sites and I choose to offer that service for lower rates than are generally available elsewhere.  That still allows me to cover my costs, pays for the hosting of this site and enables me to subsidise the cost to the sites of a couple of organisations to which I belong, like the Women's Studies Association (NZ) Inc. and The New Zealand Freelance Writers' Association.

It has also enabled me to play around and set up sites for Stella and her friends to experiment with a discussion board, since they're too young to safely get involved on public sites; and then there was Where's Robot? which provided lots of entertainment during the subterfuge. 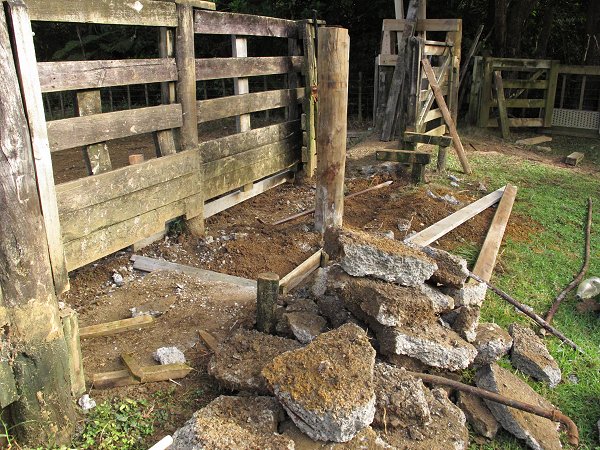 Stephan decided he needed to replace the cracked concrete in the section of the race in which we put the scales.

He thinks he and his father, Patrick, would have thrown the bits of pipe in as reinforcing; they didn't really work very well, the concrete having cracked along one of them where it rusted; although thirty-five years isn't a bad life-span.

The original yards, when they came here in 1977, were no longer very sturdy and soon after they arrived one of the cows they'd bought with the farm tested positive for TB, so they were put on "movement control" which required the herd to be tested every six weeks.  Stephan immediately had to upgrade the old yards so the testing could be safely carried out. 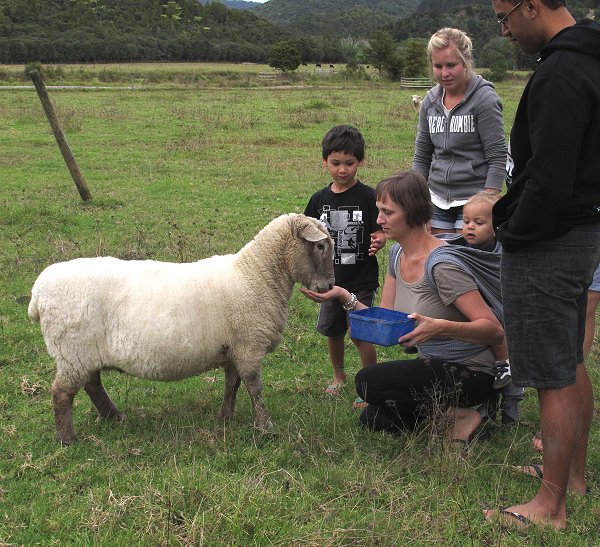 Elizabeth and William, Sarah, Karl, Kerehoma and Maihi, and Simon and Anna came to visit.

The sheep are always very sociable when people appear with maize to feed them.

The children live in Auckland, so trips to the farm are always exciting. 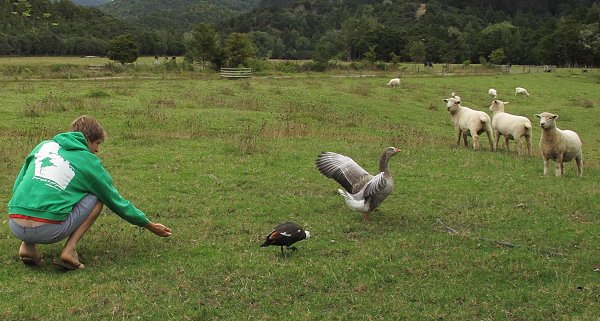 Simon tried to make friends with Storm and I caught this moment when she decided the goose was too close and chased her away.

It's not always size that counts, but ferocity!

A couple of people trying to contact me in the last fortnight have had their emails bounce back to them.  The problem was at their end: they were yahoo or xtra customers and those addresses have been blacklisted by some email servers after the hacking/spamming problems of the last few months.

If you have trouble getting in touch with us, please try the Contact Form.