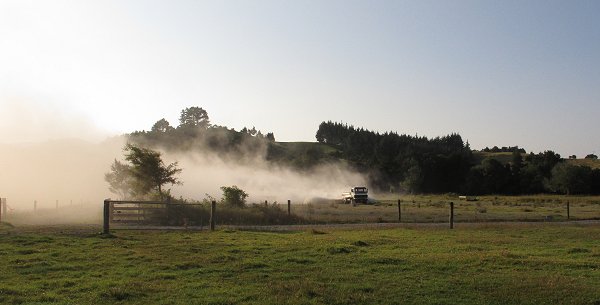 It's been so dry for so long that it must surely be going to rain soon.  Ryan phoned last night in response to a call from me, to ask if I'd mind him spreading my lime on a Saturday?  Of course not.

We did some of the north side of the farm, which also had fert last year, because there's a lot of Penny Royal around, and it seems to me that where the soil is in better condition, there's less of that plant.

The air was very still to begin with, so the dust drifted slowly away.  Later there was rather more movement.

For some of the spreading I left Ryan to it, just opening the gates, then I did one truck-load with him (it's a dusty, bouncy, sometimes alarming experience in the cab of a ground-spreading truck!) and Stephan jumped in for the next couple.  It's helpful for Ryan if we go out with him, otherwise he might miss places he can't see which are accessible, but hidden. 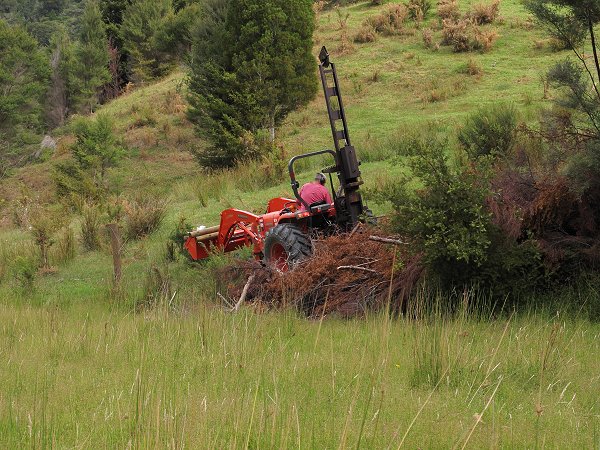 Stephan spent most of the day fencing along the side of the Big Back swamp, thumping and digging in posts.

I walked across the swamp to take this picture, encountering a wasp in the long grasses growing there!  (Three days of painful swelling and itching ensued.)

Then I walked up the other side with the GPS, tracing one of the swamp's tributaries, in preparation for working out where the fences will go on that side.  Water comes out of all our hills, which is a lovely thing in some respects, but creates complications for farming and fencing. 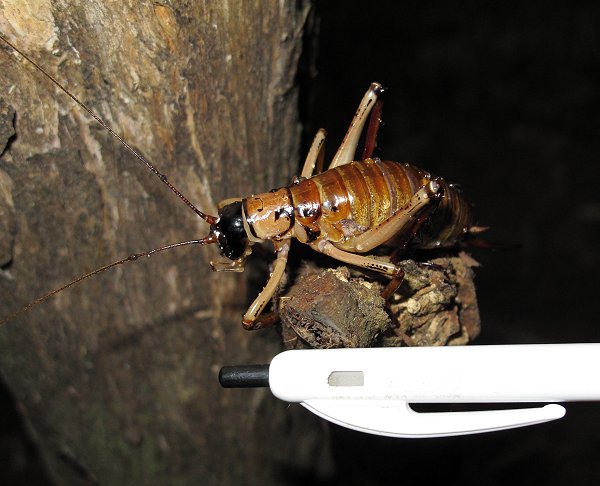 I checked on the cattle in the Middle Back paddock and decided their trough needed cleaning out - being under Totara and Kanuka trees, lots of leaves end up in the bottom and while they don't tend to rot horribly, they do discolour the water and presumably cause the taste to change for the cows and right now they need good drinking water at all times.

I pulled my siphon hose down out of the tree where I leave it and completely forgot to check inside it before dropping it in the water and covering one end with my palm.  I felt a definite scratching on my hand, which was immediately followed by the alarming sight of a very large Weta swimming across the trough! 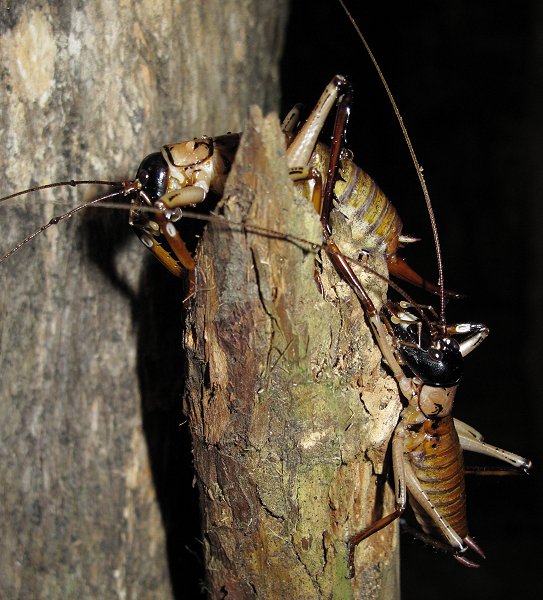 I'd obviously disturbed this beautiful pair in what they'd probably decided was a great home.  To get them out of the trough I used a very long stick, because I know how fast they can move.  Once back on dry wood they were happy to stop and rest for a few pictures, before I took them back to the tree from which they'd come and they both ran off up into the branches. 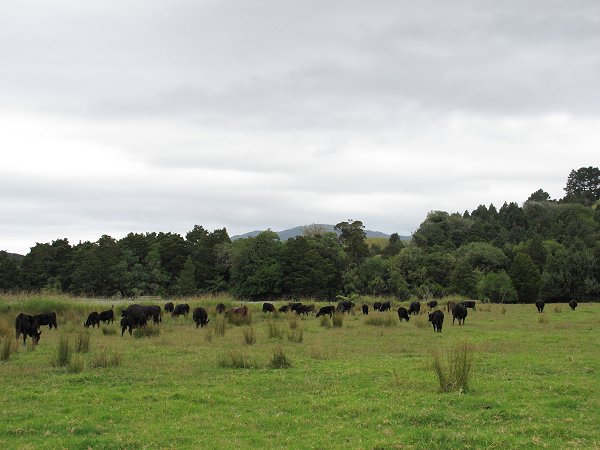 We get a lot of this sort of heavy cloud at this time of year and it often leads to nothing at all.  But this evening there was a sudden quite heavy shower, for a little over five minutes and I thought of all the lime being washed off the grass.  The rain gauge contained only 1mm on Sunday morning, but one is better than none when Kikuyu will use anything it gets to put on a bit of green. 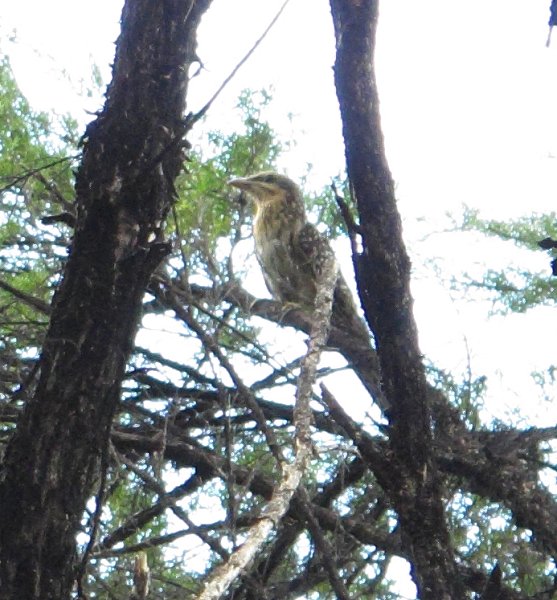 I happened to look up and see the movement of a large bird in the trees as I walked through the bushy area of the Back Barn to the bottom of the Middle Back this afternoon.  I thought it was a Rosella from its size (before I'd seen its colours), but then realised its movement was different.  It was a Long Tailed Cuckoo, Koekoea (Eudynamys taitensis), on its way north.  I hadn't seen or heard them for several years, but this is the second I've observed this season.  It was a gorgeous bird to watch, with very fluid movement.

Koekoea are migratory, spending their winters somewhere in the Pacific Islands.  They don't seem to breed here, presumably heading further South.  Like other cuckoos, they use other birds to rear their young, but none of those species (Whitehead, Yellowhead or Brown Creeper) are in this area.  Stephan said he heard and saw a large group of the birds over at Whakaangi (Doubtless Bay), where they were presumably gathering before continuing their migration. 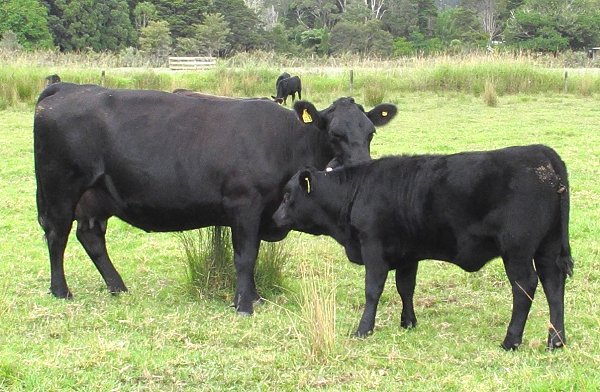 613 having an affectionate moment with daughter 729.  Her daughters have been lovely, although with 713 coming back on heat this week, there's a bit of a shadow over them now.  It's all very well looking pretty, but you have to be able to do what you're here for as well. 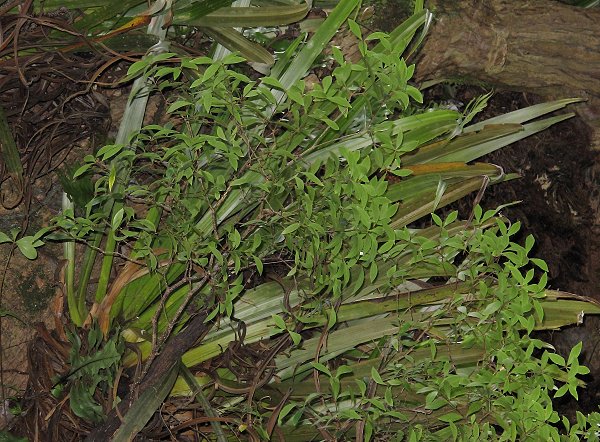 The Pittosporum cornifolium whose probable offspring I found on the ground last week.  They usually grow, like this one, quite high up in the Puriri trees. 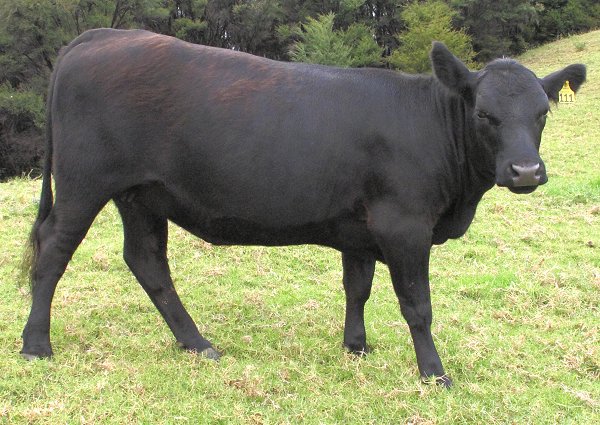 I've gradually been taming Emergency and today had my brush with me, so cleaned out her tail.  She has a lovely tail switch, long and silky with a slight wave.  Her grand-mother, Irene, had hair like that.  Her other relatives all have thicker tail hair.  I like brushing tails; there's something so restful about grooming hair (I quite enjoy doing the girls' hair when they're here too, although not with the same brush) and as I don't have hair of length myself, I enjoy brushing others'. 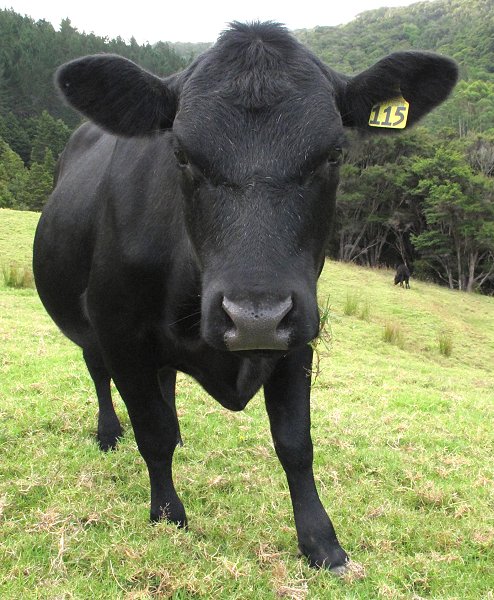 I thought, when she was born, that Surprise 115 would gradually lose those white facial hairs, but they're obviously permanent.  They're odd, being only single scattered hairs.  I called her Surprise because she was the calf I thought Demelza had lost in mid-pregnancy. 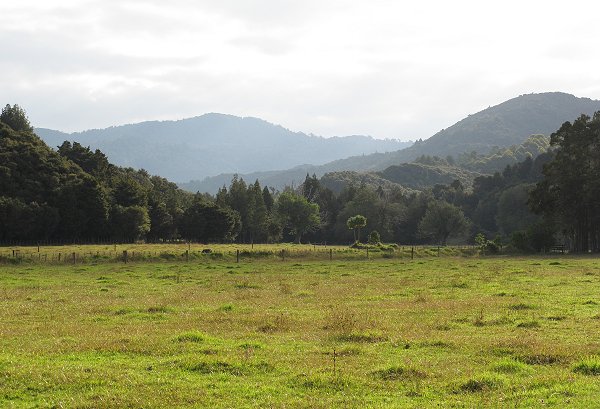 A smoky haze has filled the air over the last couple of afternoons.  I can't smell smoke, but it certainly looks like it.  There have been some big fires further south, around Hokianga and north of Auckland, so it may have made its way up here from there. 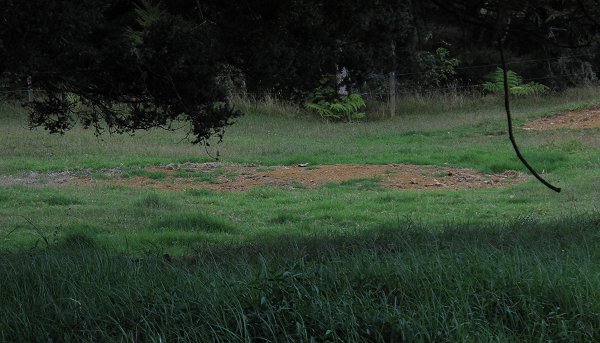 Kikuyu grass is quite quickly covering the dump site Stephan and Lance cleared a few weeks ago. 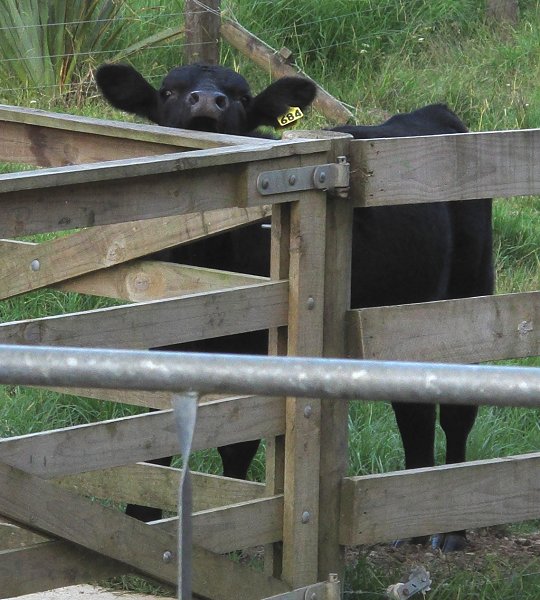 The orphan calf, 684, is becoming more visible over the gate of an evening, when calling for his dinner.

I keep revisiting the advice received from others about weaning him when his mother died and always return to my own position: we rear calves as best we can on what they're meant to have: milk.  Since we have "free" milk, that's what this calf gets and he's doing almost as well as he would have on his own mother.  Some other residents are losing weight from not eating as much cheese and other dairy products as would normally be available through the summer and that's not a bad thing at all!

Drought was officially declared for Northland today, which releases some funding to the rural support trusts which have begun operating in recent years to help farmers, who are often geographically and socially isolated, cope with extreme events.  The news media keep repeating "relief for farmers" but there's no financial support available except in the most extreme circumstances and then only to support families, not animals and businesses - not that I'm arguing for the latter, but there's some public backlash against the idea of it, because of misunderstandings brought about by the nature of the media reports.

When I drove up from Auckland in early December, I noted how crisply dry everything looked south of Whangarei.  I suspect we are, as we often do, having a much easier time than many other areas of what gets called Northland, and extends from the Cape 100 km (60 miles) north of us, to somewhere north of Auckland, about 200 km (120 miles) to the south. 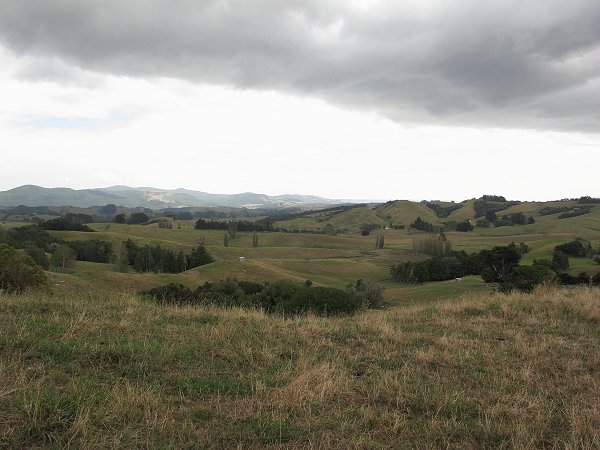 The friends who looked after our place when we went on holiday to Queenstown last year, are off for one of their own - to the same place, as it happens.  So we're going to return the favour and today we went for our farm familiarisation visit.

There are lovely wide views from some of the high places.  Everything's pretty dry.

We'll be responsible for the cattle only, as someone else will be staying at the house and looking after dogs, cats, hens and sheep. 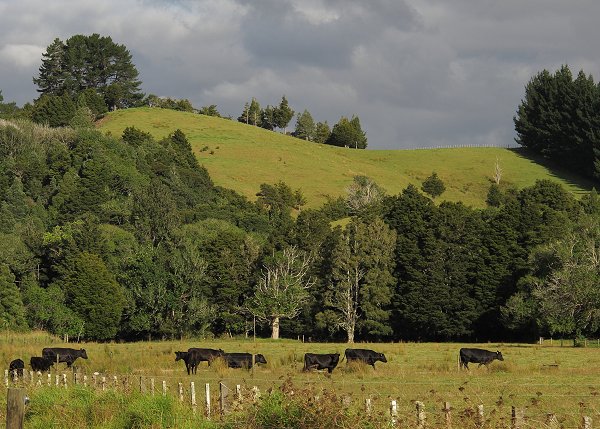 It's nice watching the hillside Over the Road getting greener again, despite the hot, dry weather.

The cows walking along the lane are the mob of 44 cows, heifers and calves, heading for Flat3; watching them go past are Zella and Dexie 101.