The week beginning the 4th of January 2014.
Saturday the 4th 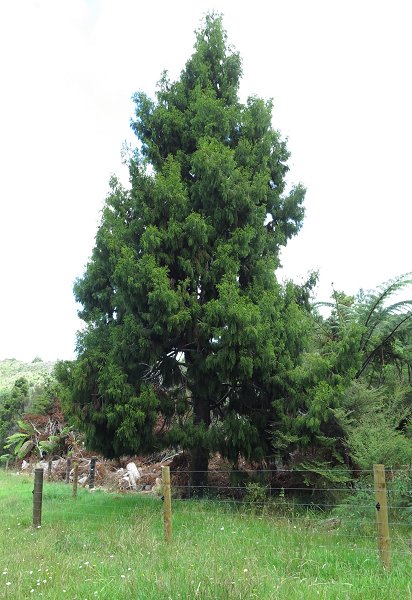 The lovely Rimu tree at the top of the Big Back paddock, with its dog-leg fence to protect it from the cattle.

Because the tree is growing near the top corner of our farm, the boundary-fence diversion is only minor and the line of the boundary is obvious.  It will make no difference to anyone that the fence is not where it should be, were the tree not there.

Most of the other Rimu around the farm are growing amongst other trees, so they're not very easy to see and their shape is dictated by the amount and source of the light around them.

Stephan and Ella came out here with the tractor to start clearing a line about a metre in from the back boundary, so we can have a two-wire electric fence to prevent our cattle having the opportunity to physically touch those of the neighbours.  It's an ongoing project, to double fence all the boundaries where there are stock on the other side.

Rather sooner than I expected, the two of them came home again, having discovered a large underground wasp nest from which a number of angry insects emerged and stung Ella!  Knowing Deb has an insect venom allergy, Stephan thought he'd better bring Ella home, in case she reacted badly to the stings.  She didn't. 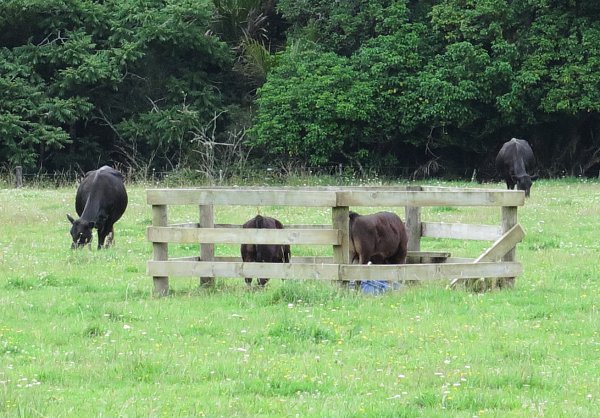 This is hardly respectful behaviour: dancing on the grave of your Aunt/Great Aunt Isla, licking and disturbing the still-unburied bones of your Grand/Great-grandmother Ivy!  We think bull 87 rubbed his head too hard on one of the rails and broke it and since then the calves have discovered they can get into the tiny reserve and eat the grass and have a play around with Ivy's bones, which are awaiting interment when I eventually get around to planting a tree in there. 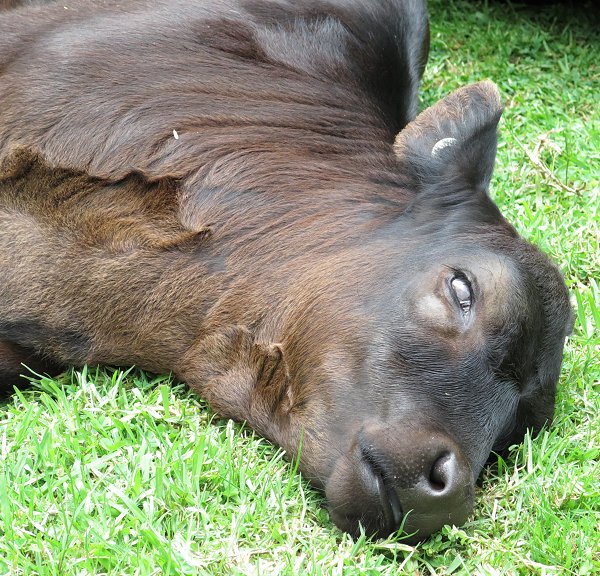 No, this calf is not dead.

571's daughter, 741, fast asleep, with her eye and tongue flicking with her dreams.  (Her eye is looking down into her cheek.) 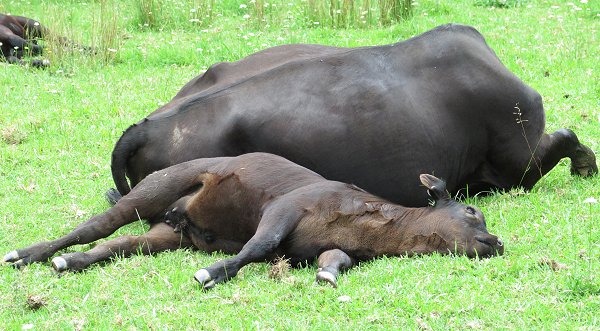 571 is still quite thin.  Her first daughter in the herd is 710 and she's looking reasonably good for a first calver, so I'm hoping the light condition of 571 isn't something she'll pass on - although it's highly likely she will.  Her calves are always very nice, well fed, well grown.  This calf will be the third daughter in the herd, if she's as good as the other two. 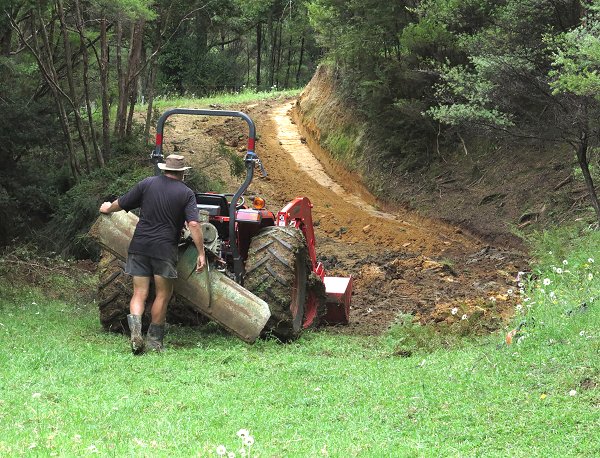 Now the cows and bulls are out around the back of the farm, good access to those far-flung paddocks makes my job easier, so Stephan attempted to rectify a wet problem on part of the track through the Back Barn Paddock, which would allow me a quick route to the Middle Back when the cattle go there.  He installed a culvert to carry water away from where we presumed its source to be, but later discovered we were wrong: there must be a spring under the middle of the track.  We'll have to move a bit of earth to go around it, into the right of the photo a bit more. 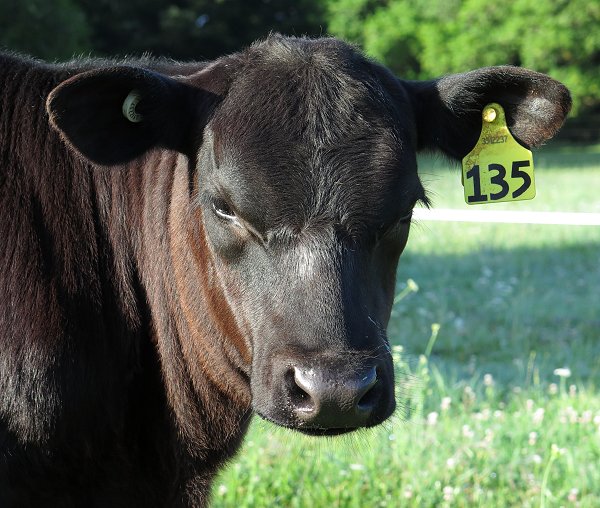 Eva's daughter, 135.  I haven't named her yet.  Eva is Eva and I don't really want to do as I do in some of the cow families and use the same name, so we need a new one which makes sense.  Any ideas?  The only one which comes to mind as I sit here is silly, inspired by the graffiti of lovestruck teens: Afta ... graffiti-ists writing I luv Jonny 4 eva would presumably, if they had occasion to use the phrase "ever after", spell it that way. 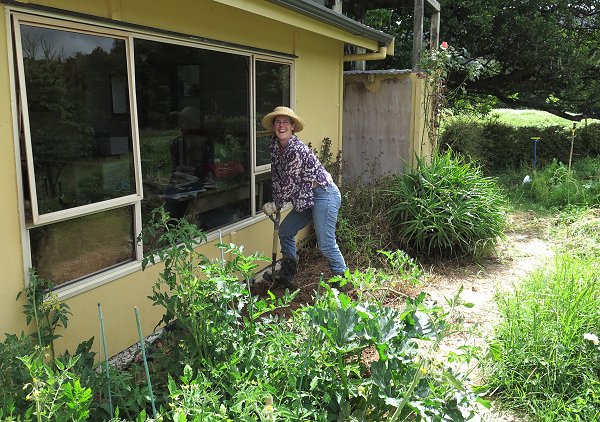 That's the right sort of guest!  Philippa and Deb took to the garden with forks and spades and evicted all the Kikuyu, which had taken over outside the house.

Where Stephan had earlier weeded, the tomatoes and a courgette are growing very well. 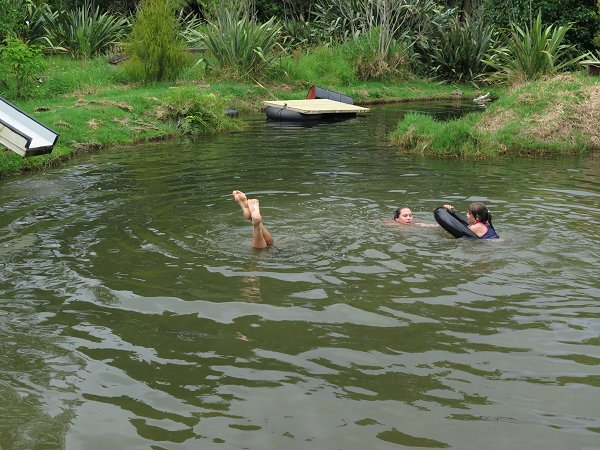 Cousin Christina and her family came for a barbecue by the pond and Emma and Ella had fun swimming together, joined by our solo synchronised swimmer (those feet were gently emerging from the water, not caught in mid-dive).

The pond has gathered some more play-things, including a couple of empty molasses drums, on which swimmers attempt to balance as they gently launch themselves from the jetty.  Such rides last for seconds and less, as everyone promptly slides into the water, with much mirth. 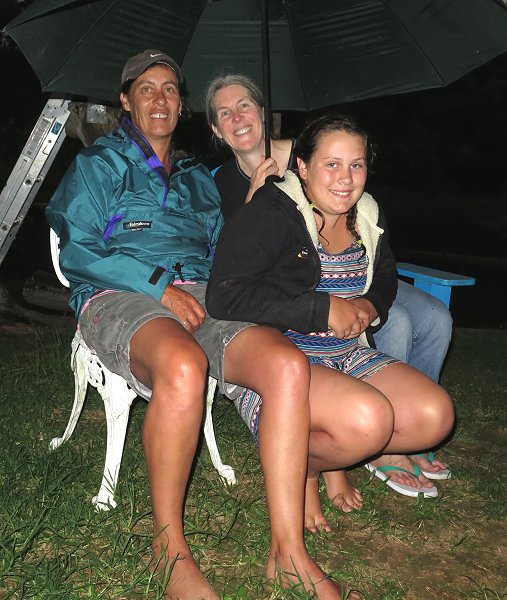 As dinner neared readiness, it started to rain!  We found a few umbrellas to huddle under for the worst of it, since it looked like the showers would quickly pass.  Those of us who weren't in the pond, didn't really want to be wet from the other direction. 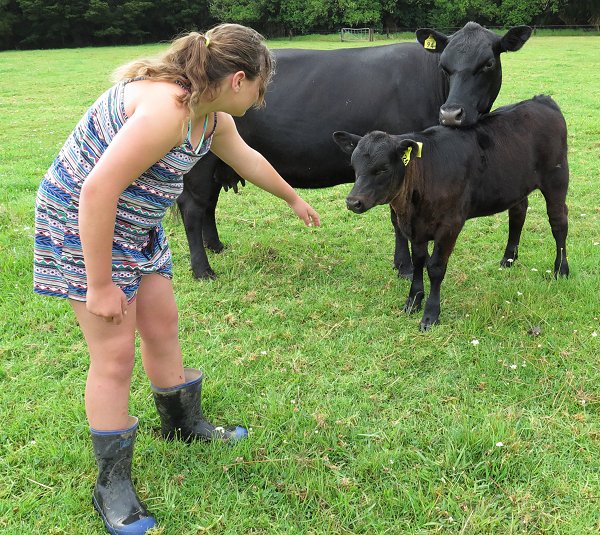 Dinky 94 is the only daughter (in my herd) of bull 60.  In the season when I was dealing with the genetic defects AM and NH, #60 was the only bull I had which tested clear of both.  I didn't think he was a very promising-looking animal, so I bought "safe" semen to inseminate the entire herd, and used the bull only to follow up afterwards.  My insemination success rate was high, so he didn't have much to do and sired only three calves that year.

However, after a very unpromising start (I called her Dinky because she was so ridiculously small) she has grown into a lovely cow and produced a very good bull calf last year and a lovely daughter this time around.  126 is a daughter of Joe 90 and I'll keep her, for sure.

Ella, Phillipa and Deb left to travel home again.  Ella says she'd like to come back again a bit later in the holidays.  It's been lovely to see her during every school holiday in the last year. 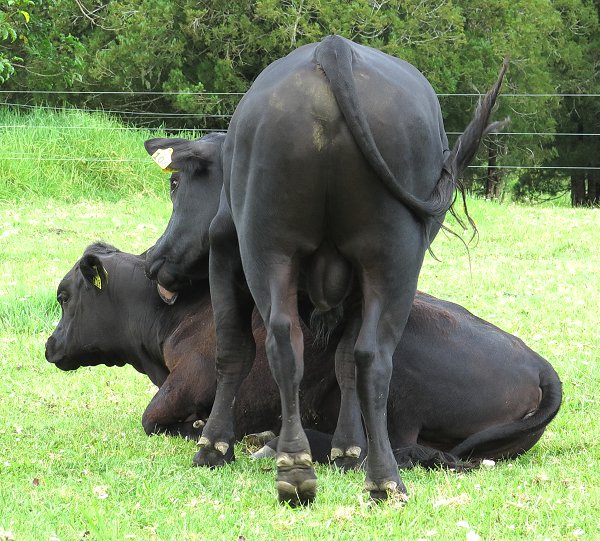 Bull 106 was quietly checking around the rest of his mob when I checked this morning, but soon returned to heifer 718 who was probably still on heat, but had obviously tired of his attentions, so sat down.  He didn't want to accept her refusal and eventually bothered her enough that she stood up, although she managed to avoid much ongoing attention by continually moving away from him.

After somehow hurting his left front leg last week, the bull is now walking normally again.  He was only slightly lame, but I watched him carefully for several days to ensure it wasn't anything serious and that he was getting better, not worse. 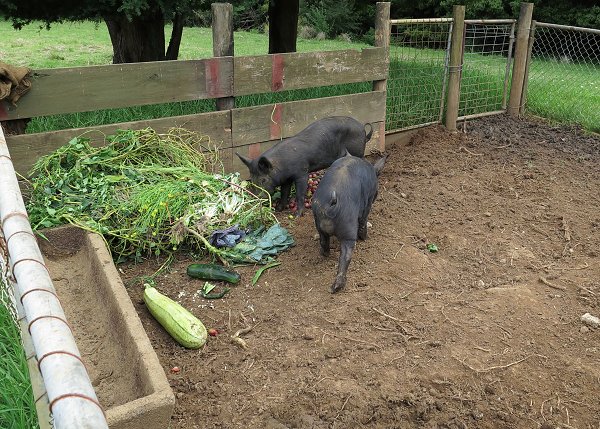 The pigs have eaten and killed off all the grass in their pen, but they get regular lots of green feed from the gardens of William and Elizabeth (along with all those lovely fallen plums) and Jane and the odd bit from our own garden.

Stephan intends to extend their run, using some electric fencing, but has been busy with a number of other tasks.

Victoria 118 received a veterinary visit today, because she appears to be getting slightly worse, now often grazing on her front knees and only occasionally getting to all four feet to move further afield.  We put her in the head bail and the vet applied pincers to all parts of one of her front hooves to determine the source of her pain ... and found none.  Watching her waving her feet around as she thinks about getting up, I wondered if there's something neurological wrong with her.  I asked if it were worth giving her some pain relief, even though we don't know where the pain is, so she's had an anti-inflammatory injection which will last three days and we'll see if that makes any difference to her.  The vet also took a blood sample to test for anything he can think of which might show up as an indication of the cause of her ailment. 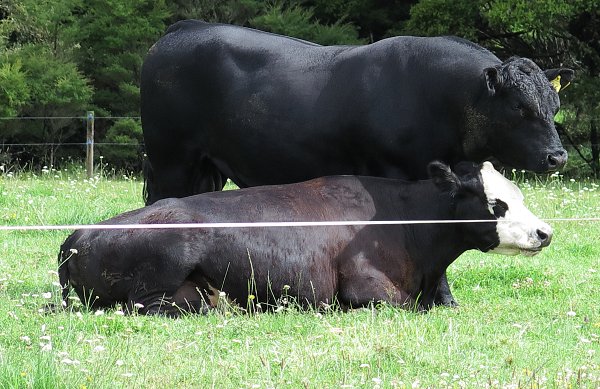 Bull 96 has been hanging around with 517 for a couple of days, indicating that she'll be on heat shortly (and subsequently was 24 hours after this photo). 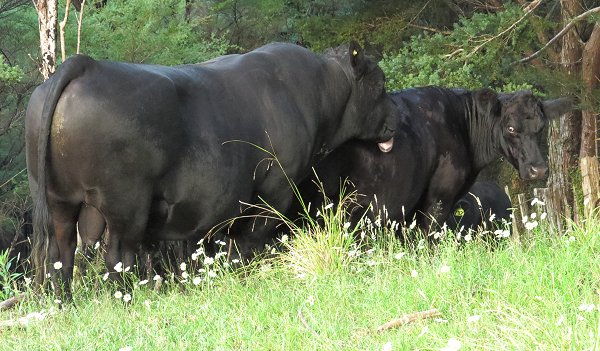 Queenly 23 looks somewhat unsure about the attentions of bull 87!

Queenly's last two daughters (107 and Victoria 118) were sired by the other two half-brothers of this bull, so I thought I'd give him a try as well.

The Insemination mob, 12 adults and seven calves, making their way up Flat 2.  I give them a couple of strips of new grass each day.  When the sun is at its hottest, they walk down to the bottom of the paddock and lie around under the big trees in the cool shade.  On briskly breezy days, they seem quite happy to lie out in the full sun.

The tractor is a year old!  We forgot to bake it a cake or sing or anything, but it still gets stroked and grinned over daily.  Having it from the beginning of this summer has made a huge difference to how much Stephan has been able to get done.  I'm glad we took the leap and bought it.  Not buying wine or treats for a year has probably done me good.