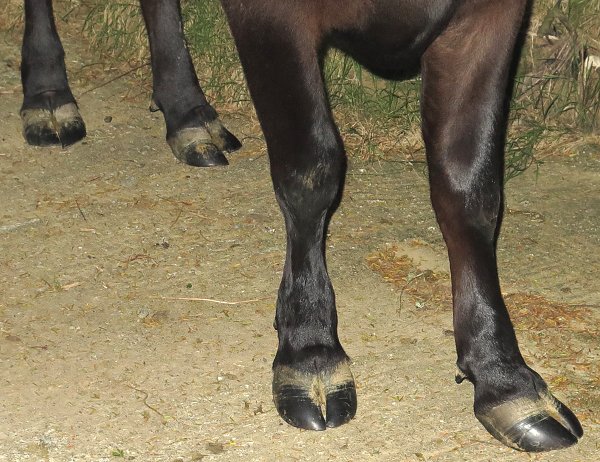 Victoria 118's feet are weirdly and (it seems to me) quite suddenly overgrown.  Because her toes are now longer than they should be, she's walking back on her heels.  The other odd observation is that she doesn't seem to mind what sort of surface she's walking on, which points to the possibility that her discomfort is not caused by pain in her feet themselves. 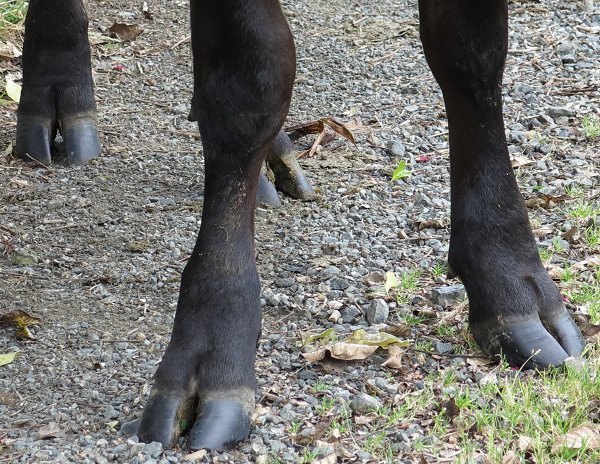 These are Irene 122's feet, for comparison.  It's a bit hard to see a great deal of difference, but it appears that Victoria has about an inch more growth above the black, shiny part of each hoof than the other heifers. 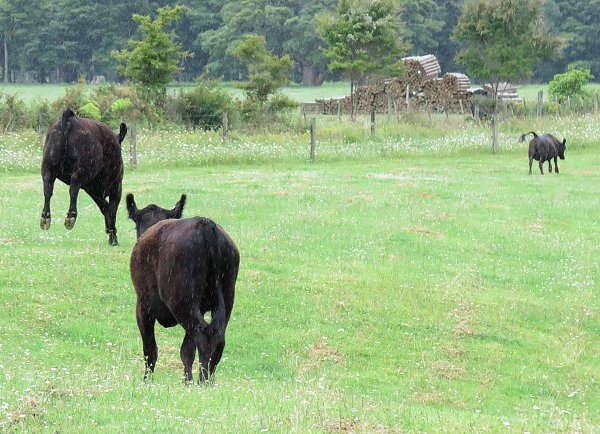 I decided that since I wasn't going to call a vet immediately, they could go into the House Paddock for close observation over the next few days and I'd see how things progressed.

The other heifers kicked up their heels and galloped across the paddock and Victoria managed a halting fast walk, which was encouraging.

Victoria then stayed on her feet, grazing, for the next hour and a half, eating very enthusiastically.  She's not sick (in terms of feeling off-colour or having an infection) but she's certainly not herself and is probably as hungry as her weight-loss would suggest. 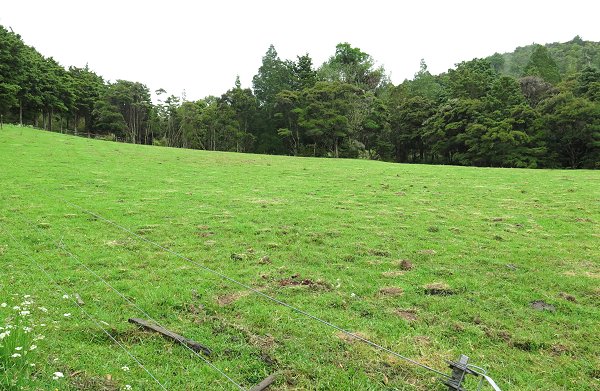 The mowing continues, this time in the Frog Paddock, which now looks completely different, since there were still a lot of rushes dotted about the place.  We've hit them with herbicide occasionally, but my usual preference is to make life uncomfortable for them by continually improving the soil fertility and reducing its acidity by the application of lime. 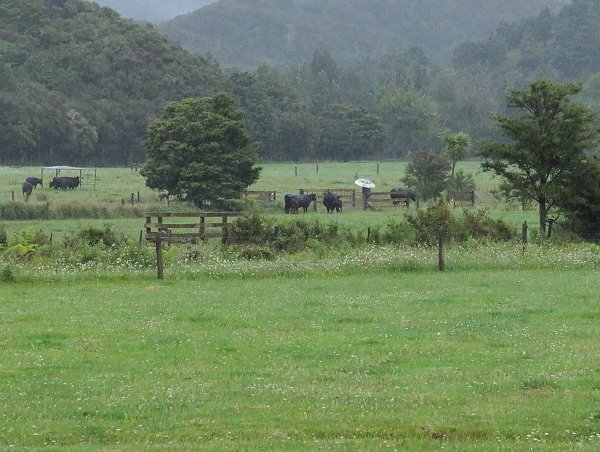 Even when it's raining, someone has to get the cows in.  Fortunately my cattle know about umbrellas, since they see them every winter at some stage.  (Big, unfamiliar shapes, make them nervous and unpredictable.)

Old friend Mitch, whom I haven't seen since March 2002, sent a message to me today via my otherwise-inactive page on a social networking site and asked if we were at home for a visit?  It was fantastic to catch up with her.  Some friends and friendships stay the same, even after extended periods without contact. 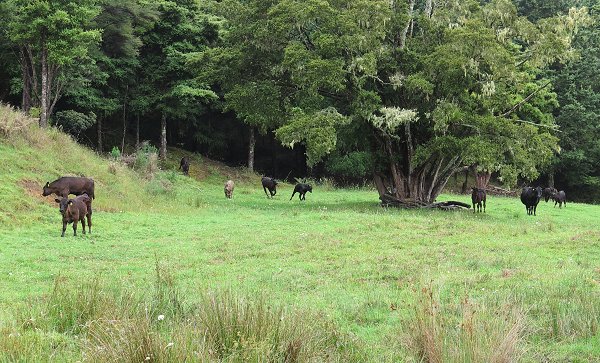 The calves are now very independent and spend long periods away from their mothers.  I went to call the cows in to go to the yards and most of the calves appeared from somewhere up the hill in the scrub. 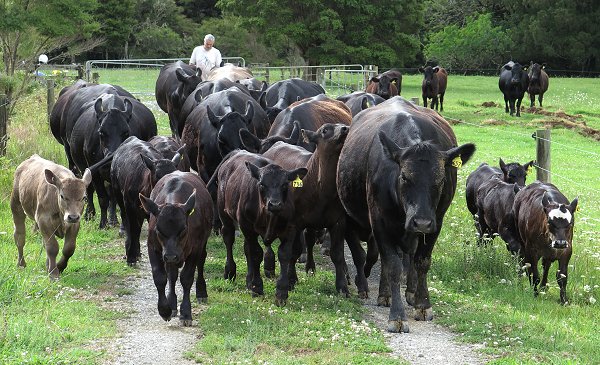 We took them in, castrated the bull calves and I gave a copper injection to all the cows. 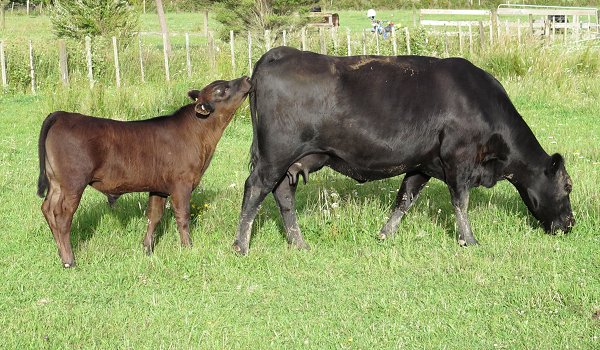 Once out grazing again, young bull calf 129 showed his usefulness as a heat-detector.  In the photo above, he's doing the same thing, as 657 walked ahead of him along the lane.

Bull calves get quite excited about on-heat cows, but they're not sexually mature and fertile for several months yet.

If 657 wasn't in my probable-cull list, I'd have found her a bull for the day, or inseminated her. 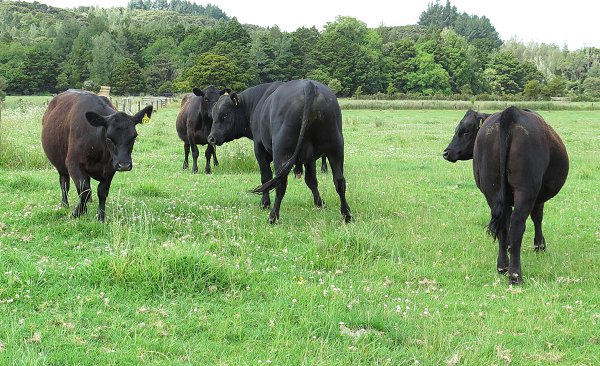 Time for mating to begin!  I've left it a little later this year because I can.  Having quit my Exam Centre Manager job last year, I no longer have to ensure all the calves are born by the first week in November.  Last spring an extra couple of weeks before calving would have provided some much-needed grass growth, so I decided to take advantage of the flexibility to move calving back by a couple of weeks this year.

The yearling heifers were all fascinated by their unaccustomed paddock-mate who obviously smelled and looked extremely interesting to them.

The three bulls have about a dozen cows/heifers each and I have a dozen for insemination.  I only use so many bulls because I can.  On a "proper" farm, there'd be a bull with up to 40 or 50 cows and if I had to buy bulls, I certainly wouldn't have more than one.  But I like mixing the matings using bulls I've bred, which have proved themselves in this environment, under my management.

Two of the commercial yearling heifers are in my insemination mob because they have the same grand-sire as Endberly, who had the monster calf last year and I think it would be wise to avoid that same mating mix this time.  The others are all pedigree cows and heifers, from which I hope to create another lot of splendid cows and bulls.  I plan to use up some of the semen I've been keeping in the bank for several years, so it takes up a bit less room in Greg's bank and in case the bank ever fails, in which case I'd lose it all anyway. 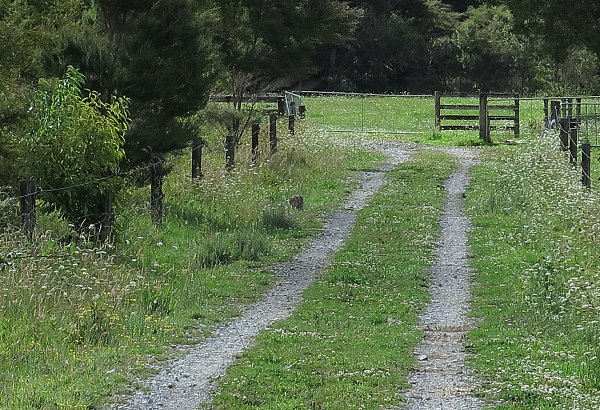 There's a little cat in the middle of this picture, a stray looking for a live capture trap, if we have anything to do with it.  We put one out, baited with something we hoped might attract it during the night.  It didn't.  Presumably this is yet another survivor of somebody's dumped litter of kittens.

This cat's appearance demonstrates why dumping cats is not the romantic option of letting them live free and happy: it is skinny, its coat is thin and patchy and it lives a lonely sort of existence, presumably catching anything it can to sustain its miserable life and in the process, threatening and ending the lives of native birds and insects. 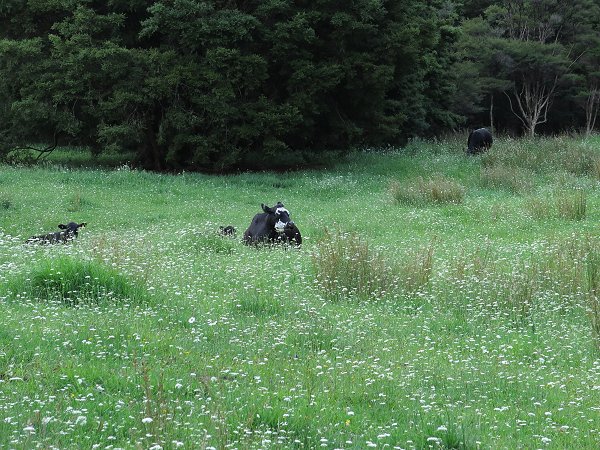 Now that's a nice sort of life!  470, eleven other cows, their calves and bull 87 are out in the Back Barn Paddock.

Bull 87 has always been calm and quiet, so I quite confidently wander around the large paddock checking his cows twice a day - although I always carrying a stick and avoid meeting him face-to-face if I can. 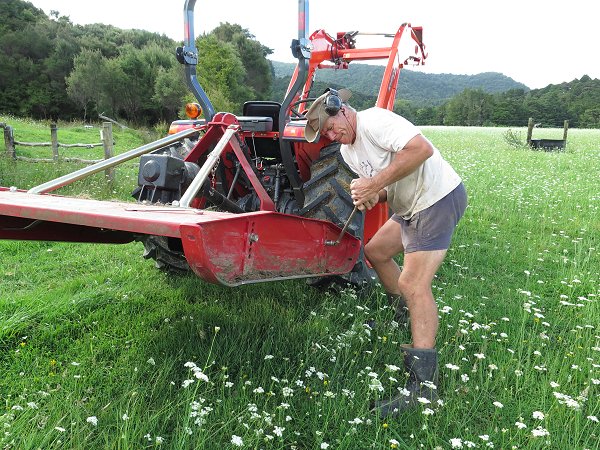 Stephan altering the mowing height of the slasher.  The skids on either side can be bolted on at five or six different positions, which determine the height at which the blades travel across the ground. 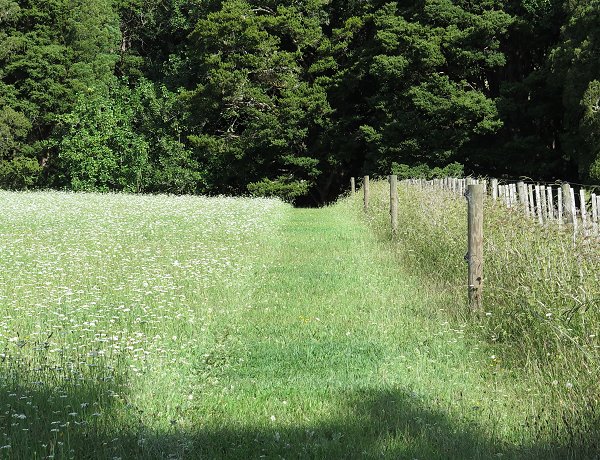 I wanted him to mow Flat 4 again at the right height to remove most of the white flowers of the Parsley Dropwort, and high enough not to cut much of the nicely-growing grass.  It took a couple of tries to get it right, but this height seemed to do the trick. 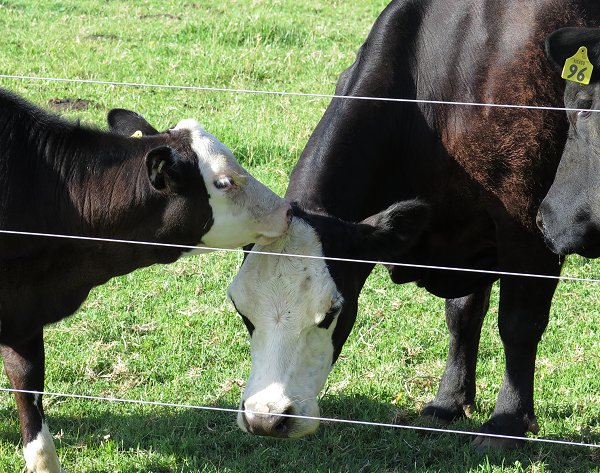 Dirty-faced 746 is a lovely calf, here licking her mother's face while the bull looks on.  She's a Joe 90 daughter. 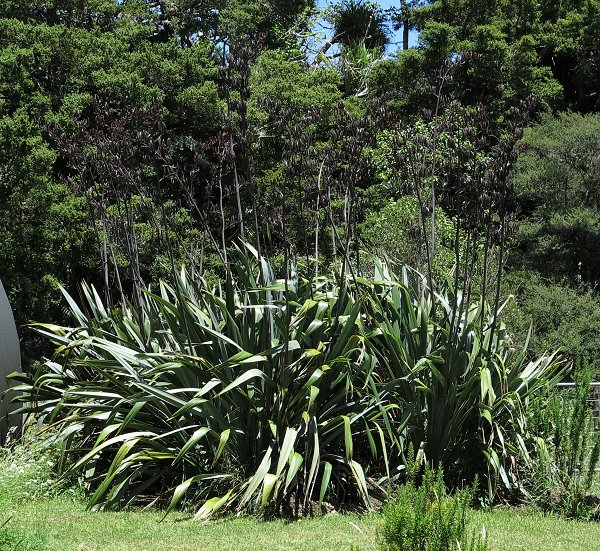 Flax plants are lovely at any stage.  Now the flowers have gone and the rich, dark chocolate-coloured seed pods have developed.

Ella, mother Deb and her partner Philippa arrived this evening for a few days, on and off.  Ella will stay for some Daddy time while Philippa and Deb go exploring and holidaying further north. 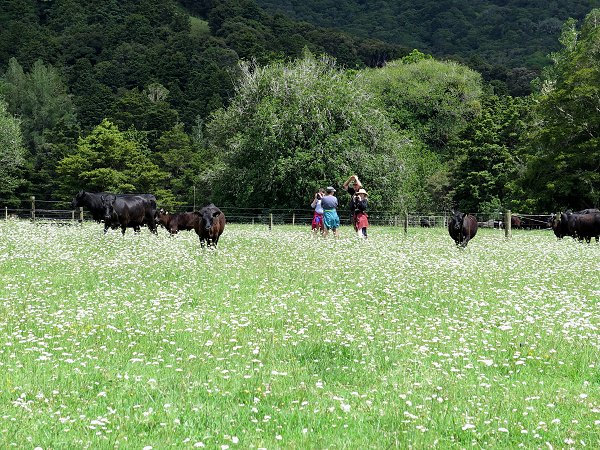 We all went out for a long walk, starting with a visit to the insemination mob, so I could check them closely. 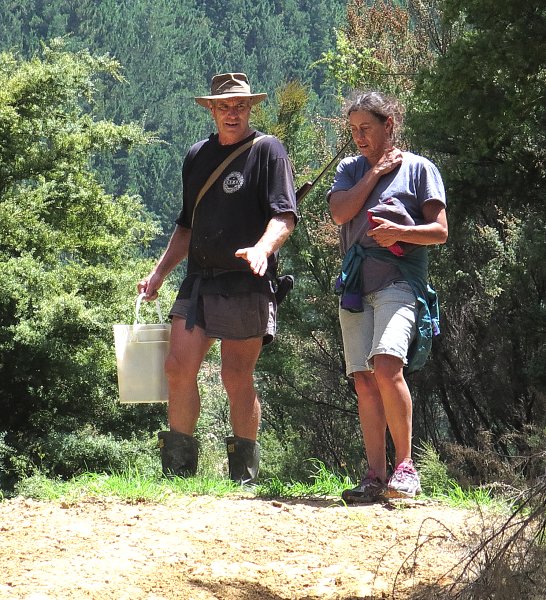 Then up the south side of the big swamp in the Big Back and down the other side.

I quite like taking pictures of Deb and Stephan together.  I think they'll be important to Ella at some stage.  Looking at the two of them, there's little chance Ella's going to be short. 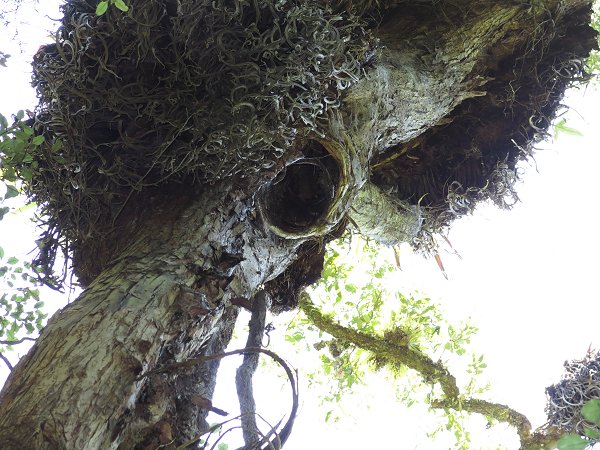 This is one of the Northern Rata trees in the Bush Flat reserve.  The host tree has died and in the last couple of years, fallen down and out of the Rata's embrace.  The hole is formed by the Rata vine having grown around the host tree.  There's a lot of grey, curly leaf matter, which is the undersides of some big epiphytes. 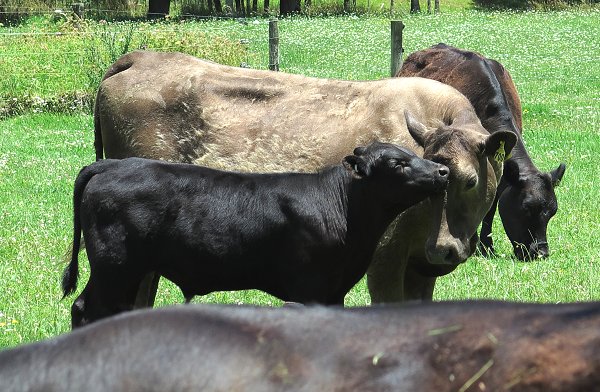 Endberly is both growing her large calf well and putting on weight herself.  I am pleased with her, because the big calf must have taken its toll on her during gestation and the difficult birth certainly caused her significant physical stress.  I won't be surprised if she's one of the later cows to calve next year, but so far things are looking good. 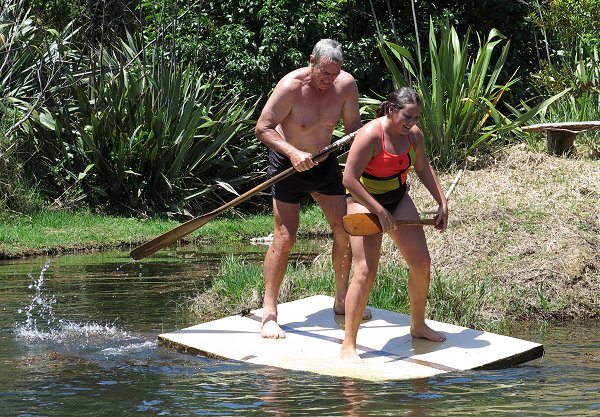 A couple of kids on the weed raft.  Stephan's lovely with children, having about as much fun as they do in the pond. 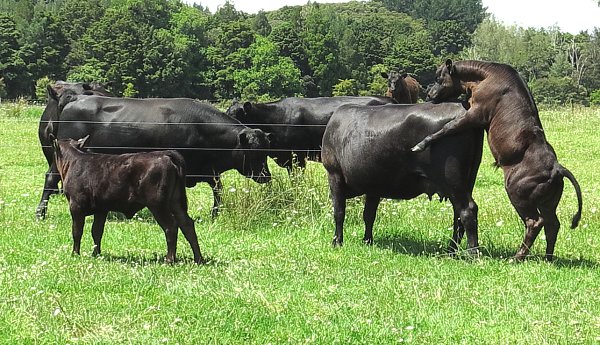 In Flat 4 Dexie 101 was on heat and because there's a broken fence-post between Flats 4 and 3, I wasn't completely happy about the amount of interest bull 106 was showing in 101.  They're pretty good with electric fences, but I don't ever want to teach my bulls that they can go over the top of one and the best way to stop that is to remove any irresistible temptation, so I moved him and his mob away.

Dexie 101 was my last insemination cow last year after rearing her first calf, but this year with her second at her side, she's the first of my insemination mob to come on heat.  Feeding her well throughout the year, because she was with Zella who milked for an extended period, has allowed her to improve her bodily reserves sufficiently to return to oestrus quite quickly after calving.  Young heifers and cows require that sort of extra care until they mature, but it's not always easy to adequately provide it. 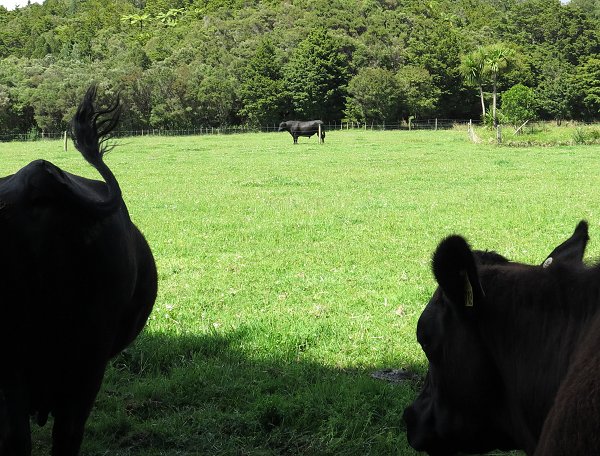 I don't know why bull 96 took himself off into Flat 5c from the shade in 5d, but I took the opportunity to have a close look at his cows for signs of fertility and mating while he was out of the way.  He's a bull of uncertain temperament and I don't trust him enough to be in an open space with him.  I don't trust any of the bulls entirely, but I am far more confident that the other two will tolerate my wandering around amongst the cows without feeling a need to come and challenge or investigate my presence.  I think this bull wouldn't actually harm me, but it's not something I wish to test. 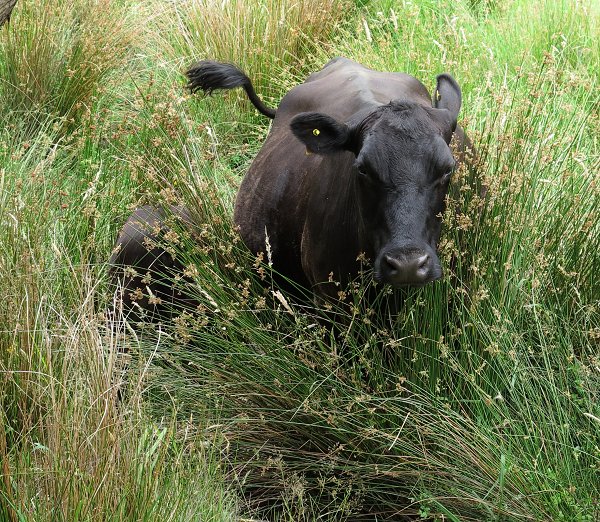 Calves feed in the funniest places.  I didn't even realise that was what was going on when I first saw 548 standing in the patch of rushes, because the calf was completely hidden. 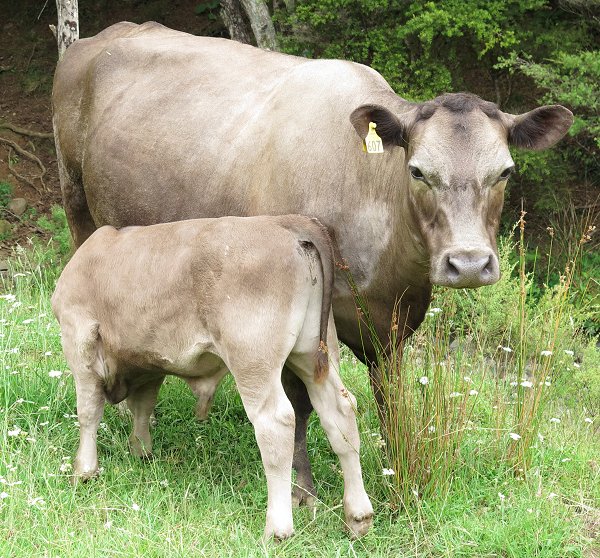 607 is such a pretty animal.  I really like grey cows, because their features and shapes are so obvious.

For some reason, there's not a great market for Murray Grey cattle up here, or I'd be tempted to shift my breeding in that direction. 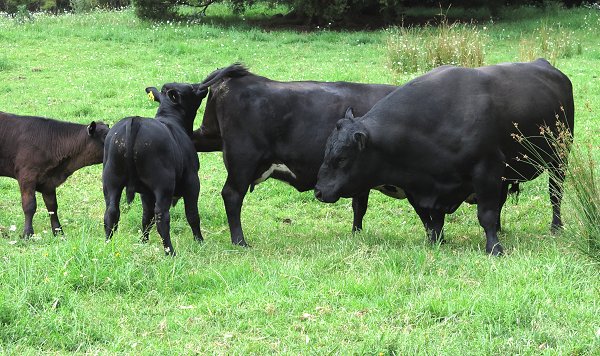 A spot of good timing, catching hot 470 in mid-kick, as she tried to discourage an amorous calf from his inappropriate advances.  The big calf, steer 732, must still have a good dose of testosterone on board, because he is a very enthusiastic follower of the on-heat cows. 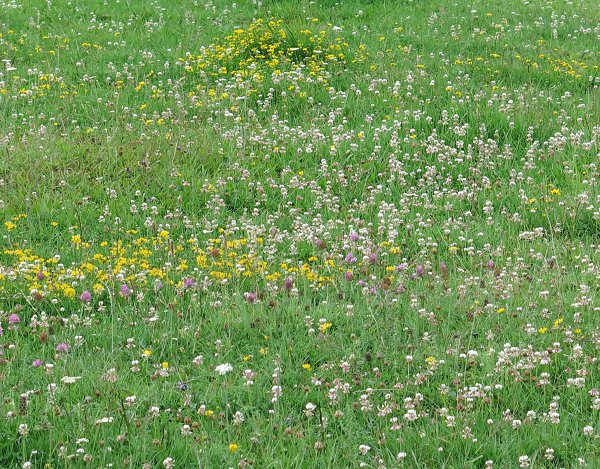 Clover - three different types - in the Windmill Paddock.  Since mowing the untidy remains of the Parsley Dropwort, the clover has shot away and everything looks great.  I've even wondered if I'll need to start worrying about bloat!  But I suspect our sward has enough Kikuyu amongst it to prevent such problems.