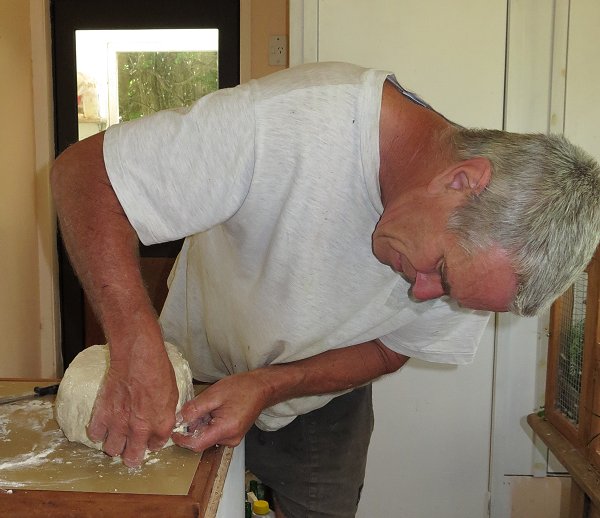 We decided to have Christmas Dinner with Jill before she goes home tomorrow, so Stephan got a ham out of the freezer, thawed and soaked it and today prepared to cook it.

Jill, who was a fantastic cook, used to cover her ham with a flour and water pastry, but we couldn't find any recipe, so Stephan worked it out and this being his second or third attempt, has it pretty well sussed. 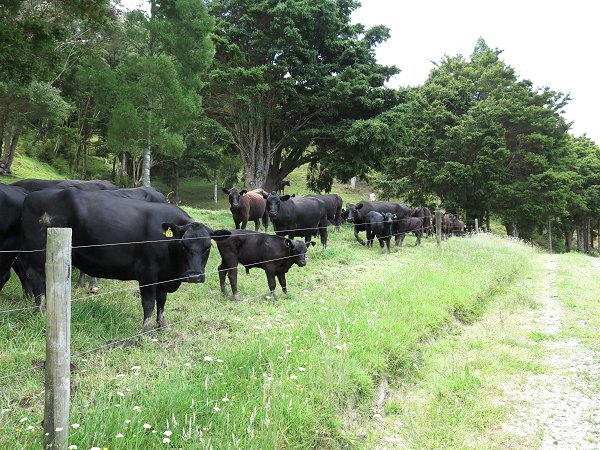 While the ham cooked, we went out to move cattle.  This is the twenty/twenty mob in the PW, about to go to the Frog paddock on the other side of the track. 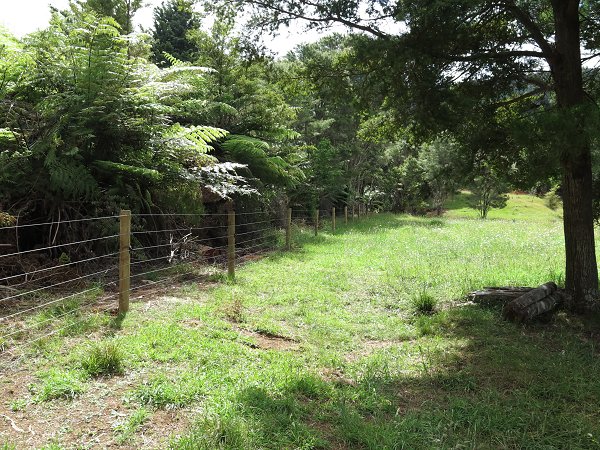 We drove out along the Bush Flat track to check on the other mob in the Big Back North, and while we were there I had a quick look at the practically-finished boundary fence.  It will still need battens, but it's stock-proof now, especially with one hot wire along the middle. 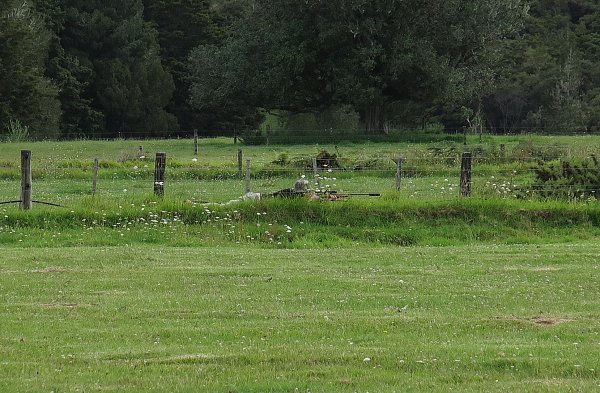 Eric came out to camp on the farm for a couple of days and brought his rifle to shoot rabbits.  We watched him from the house, stalking those cheeky bunnies which come out on to the track.  He shot one for his dinner at some point. 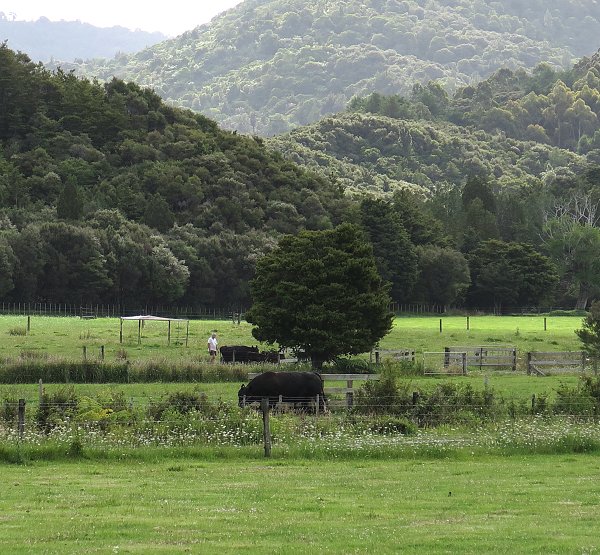 Imagen was on heat a couple of days ago (I'm planning an insemination for her this year) and I want Zella in calf as early as possible, so decided to bring the lone bull, 87, to join them for the few days remaining before I put him with a mob of cows.  I think Zella will probably come on heat quite soon, since Imagen already has.

The bull had been in 5a (with the white shade structure) and I'd thought he'd turn right up the lane to meet the cows when his gate was opened, but he came growling down Flat 1 instead, not noticing the cows following him into the paddock.  Maybe he felt the need to "secure" his boundaries before investigating his new companions. 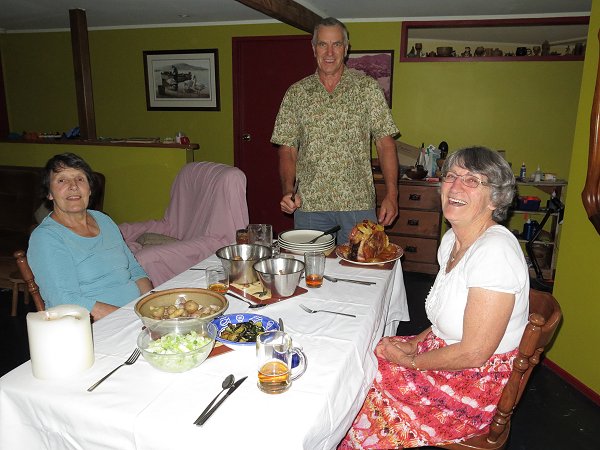 We invited Jane to come and join us for our dinner.  Jill enjoys Jane's company and I'd answered the same questions far too many times already today and felt it would be helpful to add someone else to our mix for the evening.  I do very well with my mother in a compassionately caring way, considering the nature of our past relationship and her ongoing and worsening insensitivity. 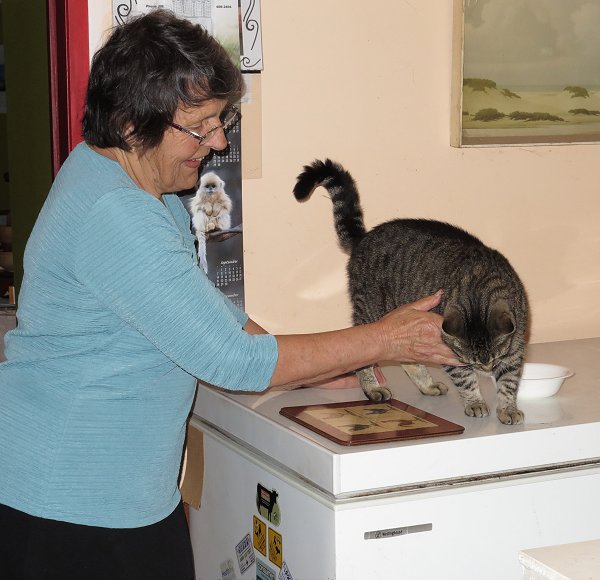 Finan, the cat nobody else ever sees.  I have a strong suspicion that he senses the state of people's minds.  Jill is a safe person for him, becoming safer as her disease progresses so that now he not only lets her touch him, but actively seeks that interaction, as he does with us when we're alone.  (Which begs the question: does he consider us both mentally deranged?) 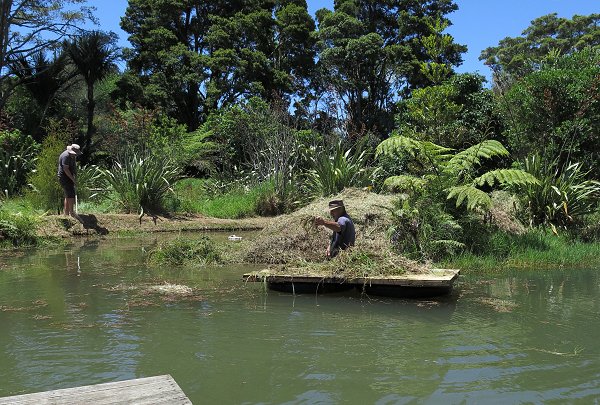 Lance came out to stay for the night and help around the place a bit.  Stephan set up a "weed raft" to carry the huge mats of grass which have grown out into the water away for composting.  The pond area had begun to look quite small and it'll be in high demand again for the summer, so maintenance was required. 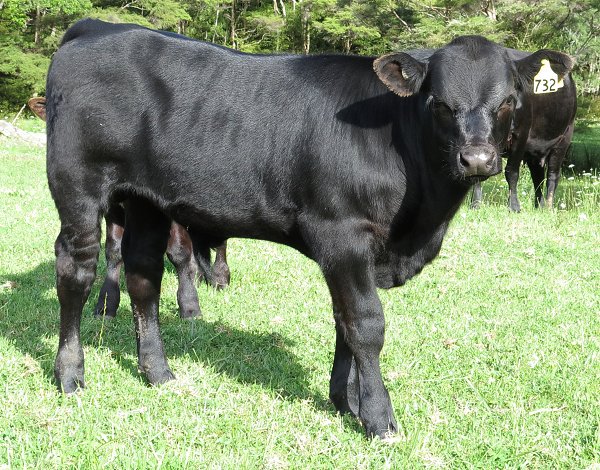 This is the biggest, oldest calf and I think he looks pretty splendid.  He has the most fabulous back end, muscly and well-filled.  It's only a pity that his mother (568) is on my cull list for being so hard to keep through the winters and for producing puny daughters. 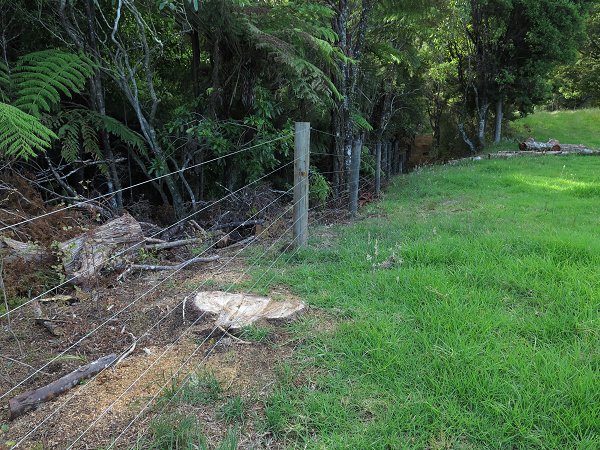 Yesterday Eric and Stephan saw a Bittern fly out of the Big Back Swamp.  Perhaps it liked what it found here last summer in the drought.  Maybe it'll bring a friend and set up home.

I rode up the Big Back South to look down on the swamp and took some more photos of the new fence while I was up there.

There were some mighty big trees growing up through the old fence.  This stump needs a bit more cutting, because it's still too high for the bottom wire.  It all looks a bit horrible at the moment, with dead trees leaning over into the bush, but they'll rot down and new things will grow in their place - there's a Five Finger I've not noticed anywhere before, which has survived the clearing on the reserve side of the fence. 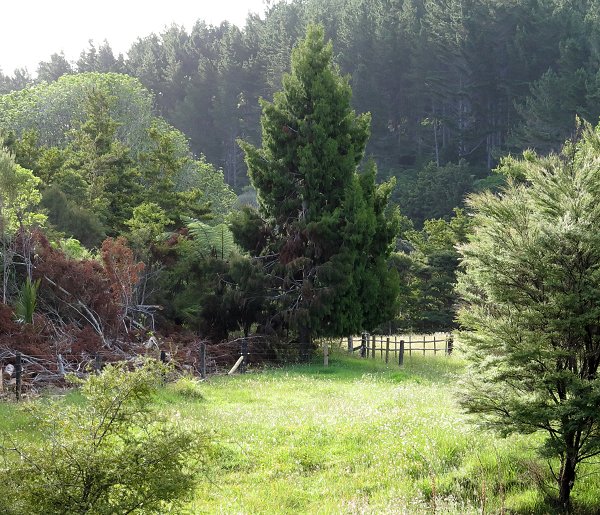 This is the one tree we would not fell: a Rimu of reasonable size.  The top strainer post for the fence is on this side of the tree and the fence then angles around it to keep our cattle away from it.

Big 96 is a snotty character and I'm planning to keep him and his mob around the flats, where I can easily see what he's up to, without going far into his territory.  106, who's now a somewhat puny-looking two-year-old will be my heifer-mating bull again.  I realise I ought to have kept one of the bull calves from last year, but obviously must have lost my presence of mind when making the castration decisions.  When castrating this season's calves, I asked Stephan to let me know if there were any testicular oddities with any of the sons of 106, whose scrotum has a slight twist and an unevenness in his testes.  There have been no problems, so I'm happy to use him again.  His calves are acceptable so far. 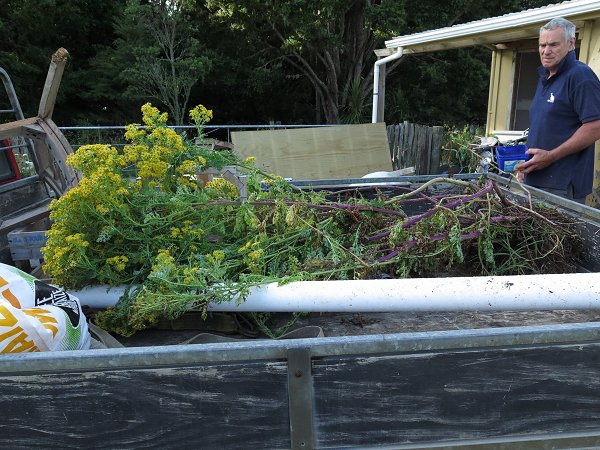 Lance and Stephan valiantly fought the Ragwort monster in the Back Barn and brought it home for flower removal.  I had already removed one lot of flowers from it a few weeks ago, so that it wouldn't have the opportunity to seed before we got back to deal with it.

We had a quiet day together, after a lovely family dinner at Elizabeth and William's table last night.  After some of my mother's reminders of my exclusion from her family, during her week-long visit, I am quite happy to be away from other people on this day, this year. 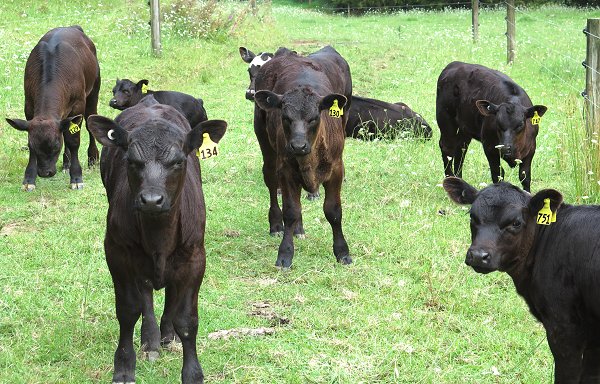 The breeder of Pono of Kawatiri, sire of calves 125 and 130 rang again the other day for an update on their progress.  He asked if I'd noticed that those two calves were thicker (wider and generally heavier) than my others.  I had to admit that no, they're not.  Actually they're a couple of unimpressive little animals so far, which may very well be attributable to their mothers, although I'd have expected Queenly's calf (130, in the centre of the photo) to be a bit better than this.  They may be later developers.  I'll use the other two straws from Pono on different sorts of cows this time around.  Queenly and Damara are two of the smaller cows, chosen because Pono's EBVs for mature weight are much larger than I wish to breed. 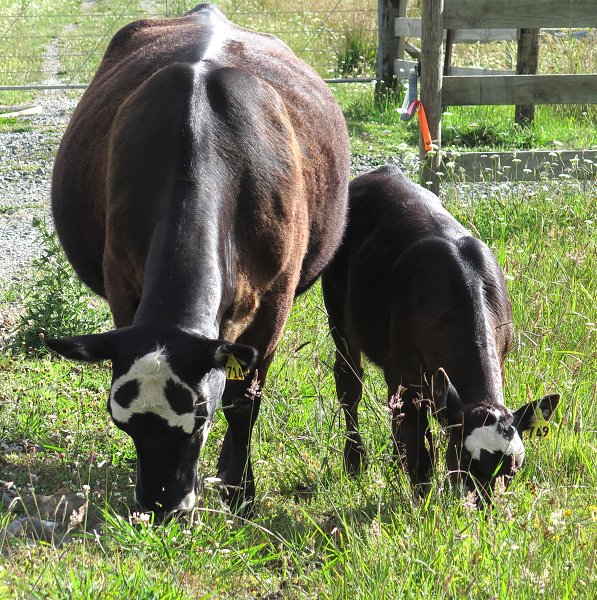 I'm delighted with this little cow and her daughter: 714 and 749.  714 is the first and only daughter of bull 87 to calve.  The calf's sire was 116, the yearling son of Abigail I sold last year.  They're doing very nicely, the calf's growth-rate only beaten by Meg 699 and her son, out of the 2-year-old heifers. 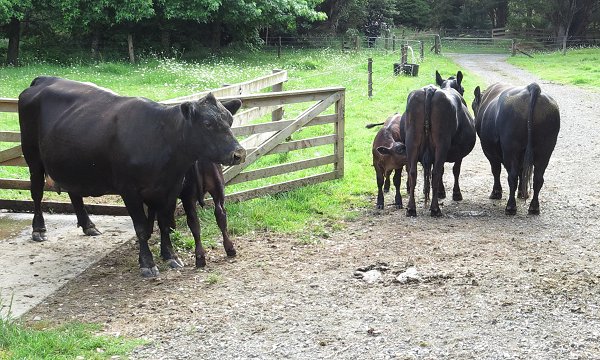 It looks like Zella is coming on heat.  She has been shadowed by the bull for a couple of days and he's sticking closer with her now than he did before.

We had our usual sort of Boxing Day family gathering beside the pond.  In the evening most of the crowd came out to help get the cows in.  Tonight that just meant the two calves and Imagen (who was then allowed to return to the paddock for the night) because Zella was quite busy at the top of the paddock with the bull.  Her son had obviously missed out on most of his lunch and dinner today, while his mother was off partying, and called hungrily from the lock-up yard.  He'll be alright; things will be back to normal again tomorrow. 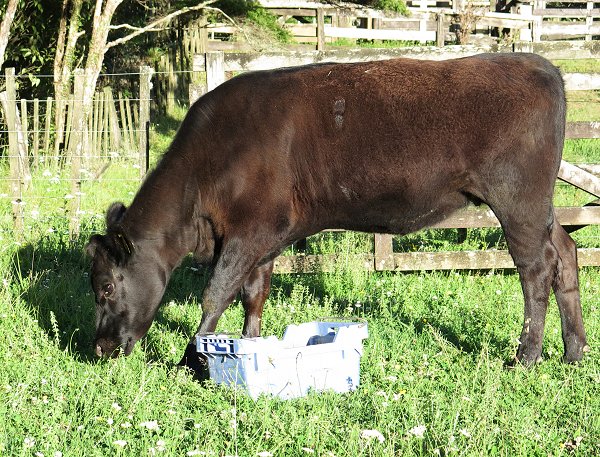 With my leg stitched and then strapped up, I've been avoiding going up the hill Over the Road, leaving the heifer checking to Stephan.

This afternoon I went up the hill to see them all and as soon as I spotted Victoria 118 lying with her ears perked up, I knew something wasn't quite right, although it didn't become obvious what that might be until she got up and wavered around on her obviously sore feet.  I called Stephan to come and help me get them down the hill and back home and we walked them quietly and slowly along the hillside and then managed to get them to move sedately down the slope to gate.

In the yards I weighed them all and gave the lightest ones a pour-on drench.  All but three made it to minimum mating weight (320kg), so I kept the two older heifers (Demelza's Surprise 115 and Squiggles' 112) and the other two back to keep Victoria company.  I thought some Magnesium might help her, but I wasn't sure if she'd had much Molasses experience yet.  She tried a bit of it.  She has lost a lot of condition, which was one of the very obvious changes when I first saw her.  The others have mostly gained about 50kg over the last 45 days and she's only 20kg heavier than last time and I suspect, having watched her have a very long drink at the trough before they came back over the road, that a lot of that is water.

I checked her temperature, to see if what ailed her was any sort of infection, but that was normal.  I gave her a pour-on drench, because she's presumably under some serious health load at present and in such circumstances, internal parasites can get more of a hold than they would normally.  I'll keep her quiet on easy terrain and good feed for a few days and see what happens.  My impression is that I may have missed the worst of whatever has happened to her and she might be on the road to recovery. 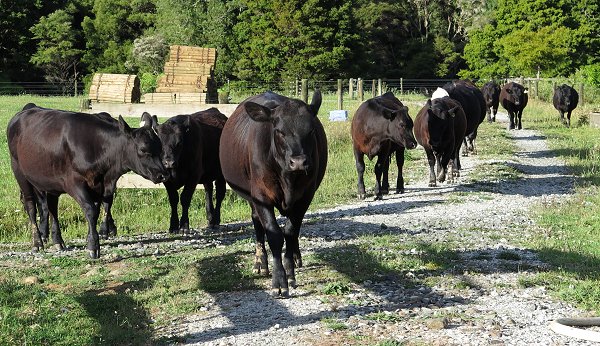 The biggest of the heifers (leading in this picture) is Demelza's 119, at a whopping 387kg, the heaviest 15-month weight I've recorded.  Demelza weighs around 660kg in good condition, so her daughter is currently nearly 60% of her possible mature weight.  The heavier they are at this stage, the easier they are to get through winter and then calving.  Last year's best heifer, 701, is still looking great.